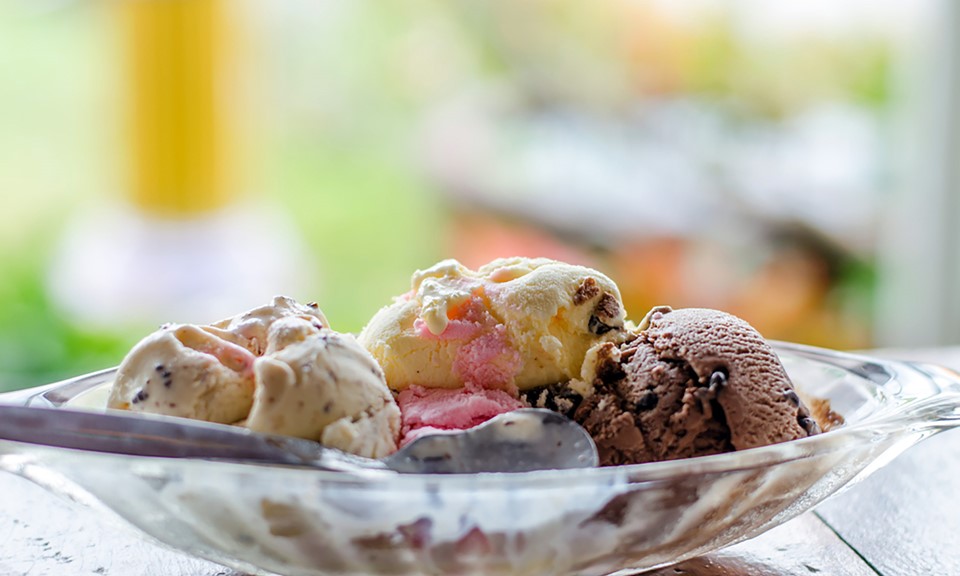 Recently, Ben Cohen and Jerry Greenfield, the founders of stoner-friendly Ben & Jerry’s ice cream, announced that if when cannabis becomes fully legal, they would definitely consider selling a cannabis-infused flavor of ice cream. Most of you are probably unsurprised by this revelation, although we’re guessing that some folks are scratching their heads and thinking, “Wait, how much more stoner can the guys who created ‘Bonnaroo Buzz’ get?” To that I say you have a point, fine sir (or ma’am). Here’s a list of 10 completely real Ben & Jerry’s ice cream flavors that, despite their 4/20-friendly moniker, aren’t already cannabis-infused:

In 2011, the duo created a new flavor of ice cream in honor of then-Late Night talk show host Jimmy Fallon (who has since moved on to hosting The Tonight Show). Despite the immediate association with 11th hour munchies, this frozen treat is cannabis-free, instead consisting of a vanilla bean ice cream with a salty caramel swirl and fudge-covered potato chip chunks. (Again, no cannabis. I swear.)

Later renamed to the way more lame-sounding “Coffee Caramel Buzz,” this flavor named after the yearly four-day music festival in Tennessee that features a wide variety of musical styles (including, yes, reggae) is a coffee and malt ice cream with toffee chunks and a whiskey caramel swirl. Not only is the whiff of cannabis you swear you smell upon cracking open a pint merely a figment of your festival-loving imagination, the whiskey flavoring is also, disappointingly, exactly that: a flavor (meaning sans alcohol). Sad trombone.

One of the most iconic Ben & Jerry’s flavors is named after the original Deadhead, Mr. Jerry Garcia. You’ll find no cannabis in this creamy concoction, but if you like cherry ice cream with cherries and fudge flakes, pair this flavor with ‘Casey Jones’ on repeat.

I mean, come on, the name alone sounds like what Dave Matthews would call his secret recipe for pot brownies. No cannabis here, although you will enjoy the flavors of black raspberry swirled with sweet cream ice cream and fudgy brownies. Just don’t eat “Too Much.” Get it? “Too Much!” Har har har! (Sorry.)

This flavor sounds like something you’d throw together at 2:30 am on a Saturday night after one too many bowls of your favorite strain. It’s got chocolate and vanilla ice cream, Heath bar chunks, white chocolate chunks, peanut butter cups, and chocolate-covered almonds.

The quintessential stoner-sounding flavor (and stoner movie cult classic), Half Baked consists of chocolate and vanilla ice cream with fudge brownies and chunks of chocolate chip cookie dough. “You ever try Half Baked…on weed?”

This one sounds less like an ice cream flavor and more like a cannabis-fueled soliloquy about loving one another, this canna-less treat is a mix of caramel and sweet cream ice cream swirled with peace sign-shaped fudge bits and toffee cookie pieces.

Oh look, another Ben & Jerry’s flavor named after a 4/20-friendly band. While cannabis-free, you might feel a chocolate high after gorging on this chocolate ice cream with gooey marshmallow, caramel swirls, and little fudge fishies (of course).

Okay, admittedly, this one may actually have traces of cannabis in it because I’m pretty sure that the mere mention of Willie Nelson’s name is enough to deliver even the slightest contact high. Mr. Nelson’s honorary flavor consists of peach ice cream with cinnamon-sugar shortbread pieces and a peach swirl, a delicious-sounding treat that should be Always on [Your] Mind.

No Ben & Jerry’s line of ice cream is complete without a nod to Jamaica and its cannabis roots. This one may not be ganja-fied, but it does sound like a pretty tasty sorbet treat consisting of chunky pineapple with a passion fruit swirl.

What’s your favorite Ben & Jerry’s flavor? Also, on a scale of “Immediately” to “Instantly,” how quickly would you purchase a flavor of cannabis-infused Ben & Jerry’s ice cream once it becomes available?