Bruce KennedyApril 20, 2019
Share
Twitter   Facebook
Print
The one-day CBD burger test proved to be a hit with customers. Will Carl's Jr. roll it out statewide? (Courtesy of Carl's Jr/Facebook)

In case you had any doubt about how mainstream and corporate 4/20 has become, you only had to attend the one-day-only inauguration of the Carl’s Jr. CBD burger Saturday, at one of its restaurants in a northern section of Denver.

'As soon as we opened the doors we had about 30 people in line and we were about 10 cars deep in the drive-thru.'

According to Alex McConnell, the Carl’s Jr. district manager, the restaurant hosting the promotion “had a full parking lot (and) people waiting in the drive-thru” just before its 6:00 a.m. opening.

“As soon as we opened the doors we had about 30 people in line and about ten cars deep (in the drive-thru) so we hit the ground running, that’s for sure,” he told Leafly.

The store reportedly sold 102 burgers in the first hour of the promotion, and around 274 by 9:00 a.m. It expects to be sold out of its allotted 1,000 CBD burgers, which include locally-sourced, hemp-derived CBD, by about 4:00 p.m.

According to a company press release the Rocky Mountain High: CheeseBurger Delight (CBD, get it?) “features two 100% charbroiled beef patties paired with Carl’s Jr. signature Santa Fe Sauce infused with hemp-based CBD oil, pickled jalapeños, pepper jack cheese and Crisscut® fries to give the burger the extra crunch – all between a premium bun.”

The burger sells for $4.20 each, in honor of the day, two per customer limit. 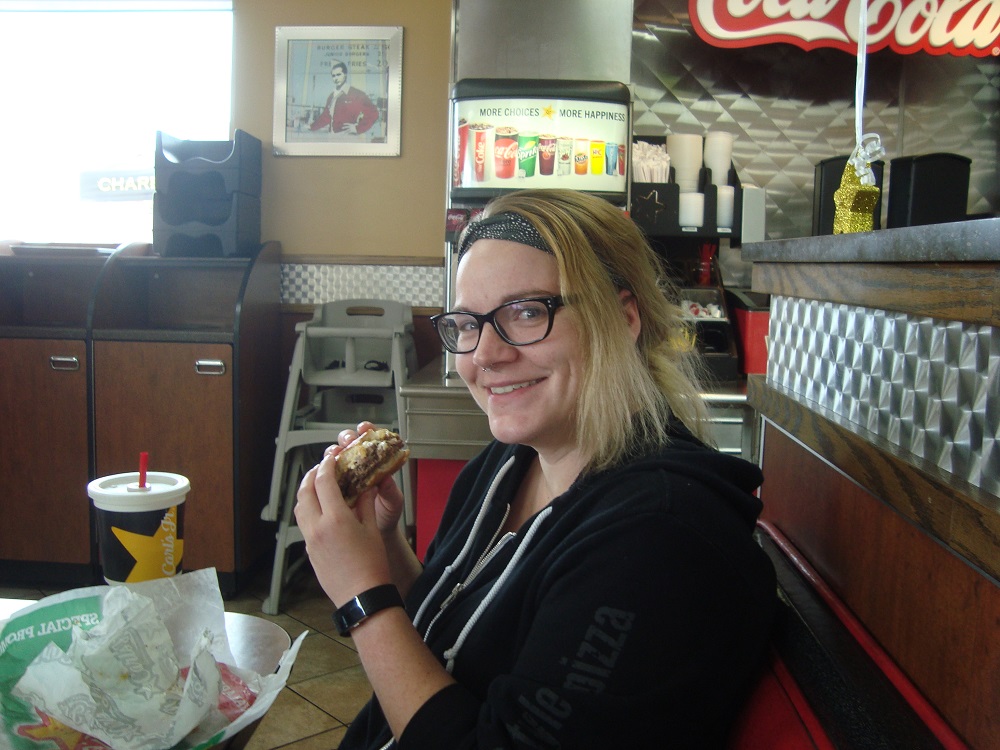 Tracy Lathrop plunked down $4.20 to try out a one-day-only CBD burger. (Bruce Kennedy for Leafly)

There was a steady flow of customers by late morning, with many people getting their CBD burgers to go, to consume around lunchtime.

“It’s one day, one location; I’m here, might as well,” said 32-year-old Sasha, a New York native who now lives in Las Vegas and who was celebrating her birthday by visiting Denver for the 4/20 festivities.

Many of the 4/20 customers were not only enjoying the concept of a CBD burger, but had good reviews of the burger itself.

“I was liking the setup of the burger itself because I like jalapeños and stuff like that on my burgers,” said 25-year-old Bryan Medina, a California native who’s lived in Denver for about 10 years. “When I saw the setup, I was already sold. When I saw CBD I said, ‘You know what, we gotta do it.’”

The restaurant expected to sell through all of its 1,000 CBD burgers by 4 p.m. today.

Bryan was accompanied by his friend, Raamon Thomas Jr., a former budtender and from Denver. After their stop at Carl’s Jr., the two were heading up to Fort Collins to compete in a video game tournament.

“We were talking about it a couple of days ago,” Raamon added, “saying, ‘Hey, a CBD burger!’ I’ve always been an advocate of CBD. I know that it’s not like THC, doesn’t get you high but still relaxes the body. And I was like, ‘We have…to go…and try it,’” he laughed, thumping the table in emphasis.

As for the taste, the two had very comprehensive opinions of the CBD burger.

“I’m liking the jalapeños,” said Bryan after taking a big bite. “Nice big chunks, juicy. Not a bad composition on the burgers. I think they got the sauce right.”

Raamon declared the burger to be “awesome,” and noted the CBD sauce gave it a “very subtle hint of earth. Overall a decent, solid burger.’’ 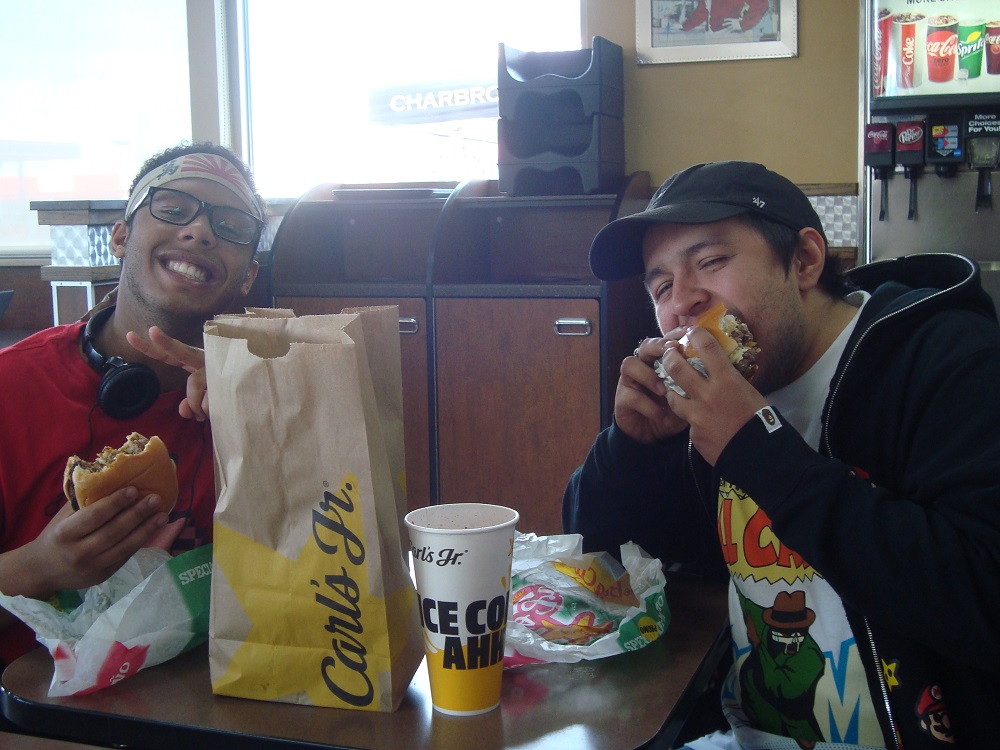 Competitive gamers Raamon Thomas Jr., left, and Bryan Medina stopped in for CBD burgers prior to a tournament. (Bruce Kennedy for Leafly)

A Larger Rollout to Come?

Thirty-two-year-old Tracy Lathrop and Ryan Schuiling, 44, both from metro Denver, also ventured up to the north of the city to try out the unique burger.

“It normalizes CBD and the perception of it,” Schuiling told Leafly, “and maybe destigmatizes it for the public to let them know that it’s not a dangerous chemical, especially in these small dosages. It’s not going to harm anyone—and if anything it’s going to help people—so if that’s the case it’s a fun promotion here. I think it could be an interesting menu item, and I think it could be the start of something.”

According to Bloomberg, Carl’s Jr. is still deciding whether to keep its CBD burger as a one-day, 4/20-only promotion or to expand the sandwich to other markets. One of the company’s executives told the news service that “a lot” of its franchises say they’d also like to test out the CBD burger.