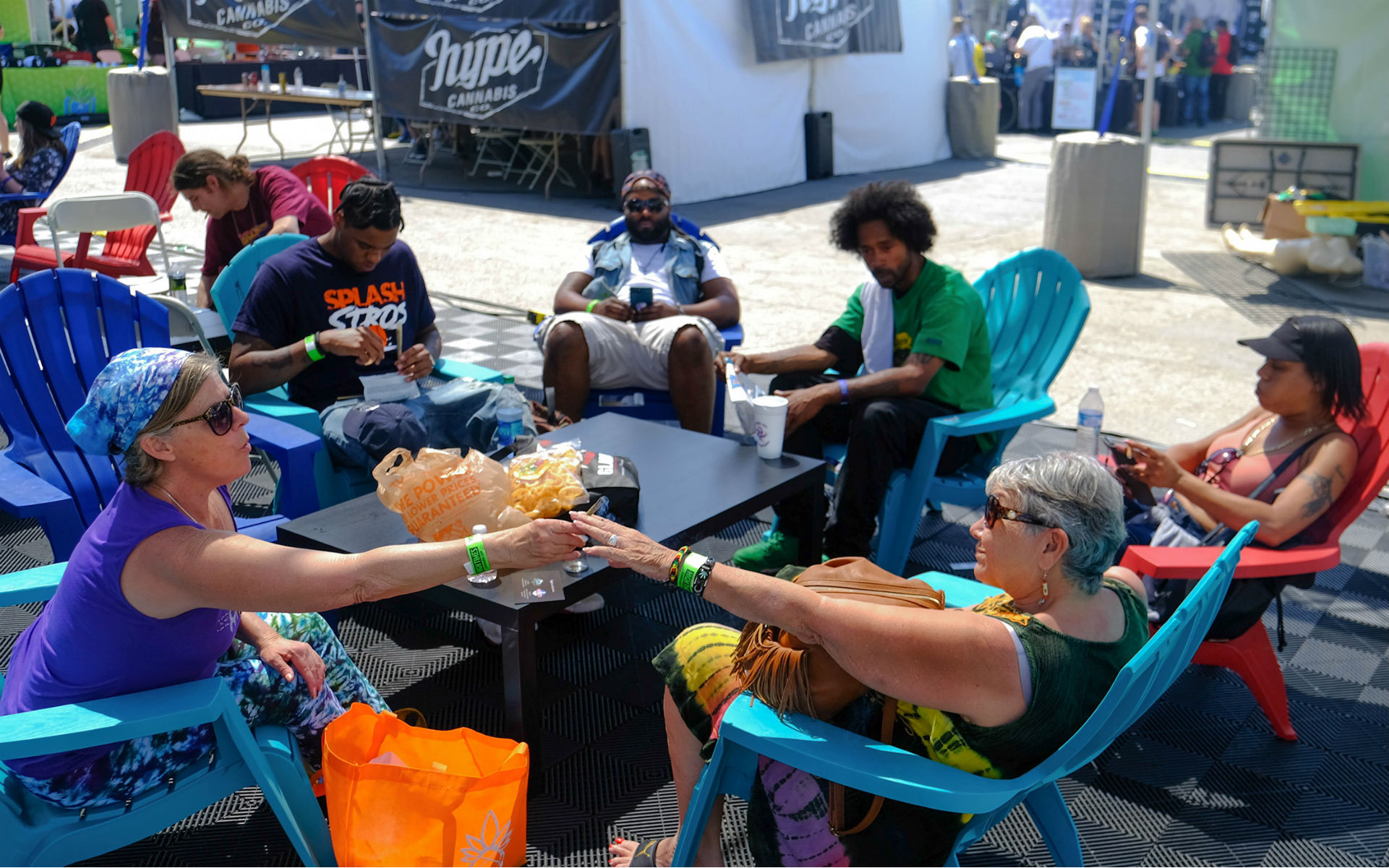 Sacramento's Cannabis Cup welcomed a diverse, friendly crowd of folks who shared the good times and a nice joint. (Kurt Hegre photo for Leafly)
SACRAMENTO, CA — The first day of the first fully licensed cannabis event of the legal era went off in big puffs of smoke Friday, under heavy scrutiny but without problems.

Here are some notes and observations from the historic legal premiere of High Times Cannabis Cup at the California Exposition and State Fair.

This weekend’s Cup is partly a  trade show, partly an industry awards show, partly a concert starring major hip-hop performers, and mostly a party celebrating the cultivation, commercialization, cultural impact and public consumption of the botanical drug California voters legalized nearly two years ago. About 100 licensed brands, wholesalers and retailers set up booths and sold freshly cured cannabis flower, processed concentrates, edibles and joints. Those products were, for the first time, merilly smoked,  vaped, dabbed and eaten openly and legally by thousands of attendees who socialized with strangers, interacted with growers, and generally behaved like adults consuming cannabis responsibly on a perfect spring day. 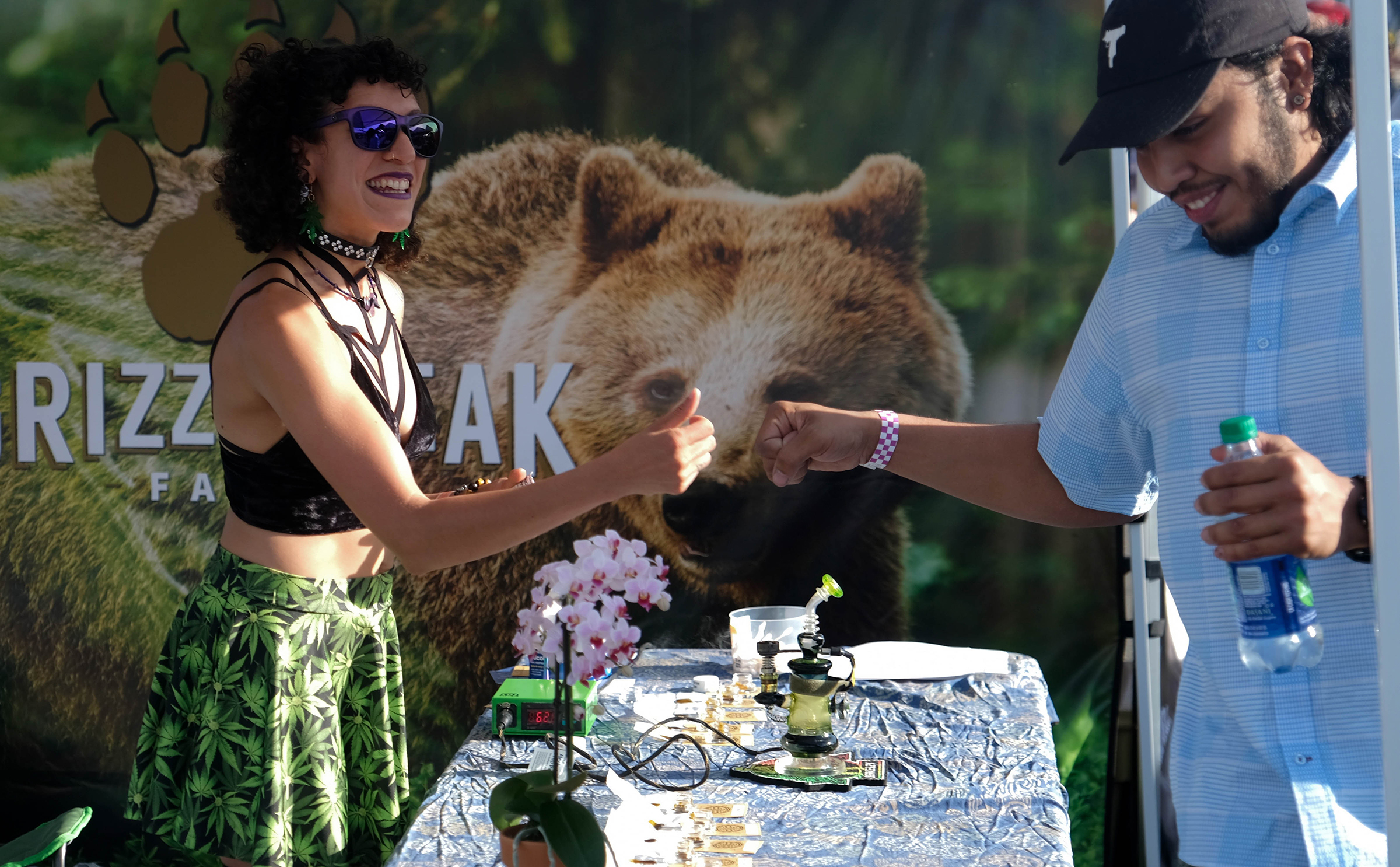 Current state law requires cannabis events to be held only at fairgrounds or agricultural district properties. The California Exposition and State Fair, aka Cal Expo, is the jewel of Golden State fairgrounds, featuring 300 developed acres of exhibition space and buildings. The Cannabis Cup is set up on the Cal Expo carnival midway, a vast asphalt-covered patch of land outfitted with a fully rigged stage, food trucks and portable toilets. A Ferris wheel towers on the periphery, offering free rides high into the air. Cal Expo is no stranger to cannabis-friendly events. Back in the day the Grateful Dead played here, backed by the traveling Deadhead parking lot show. 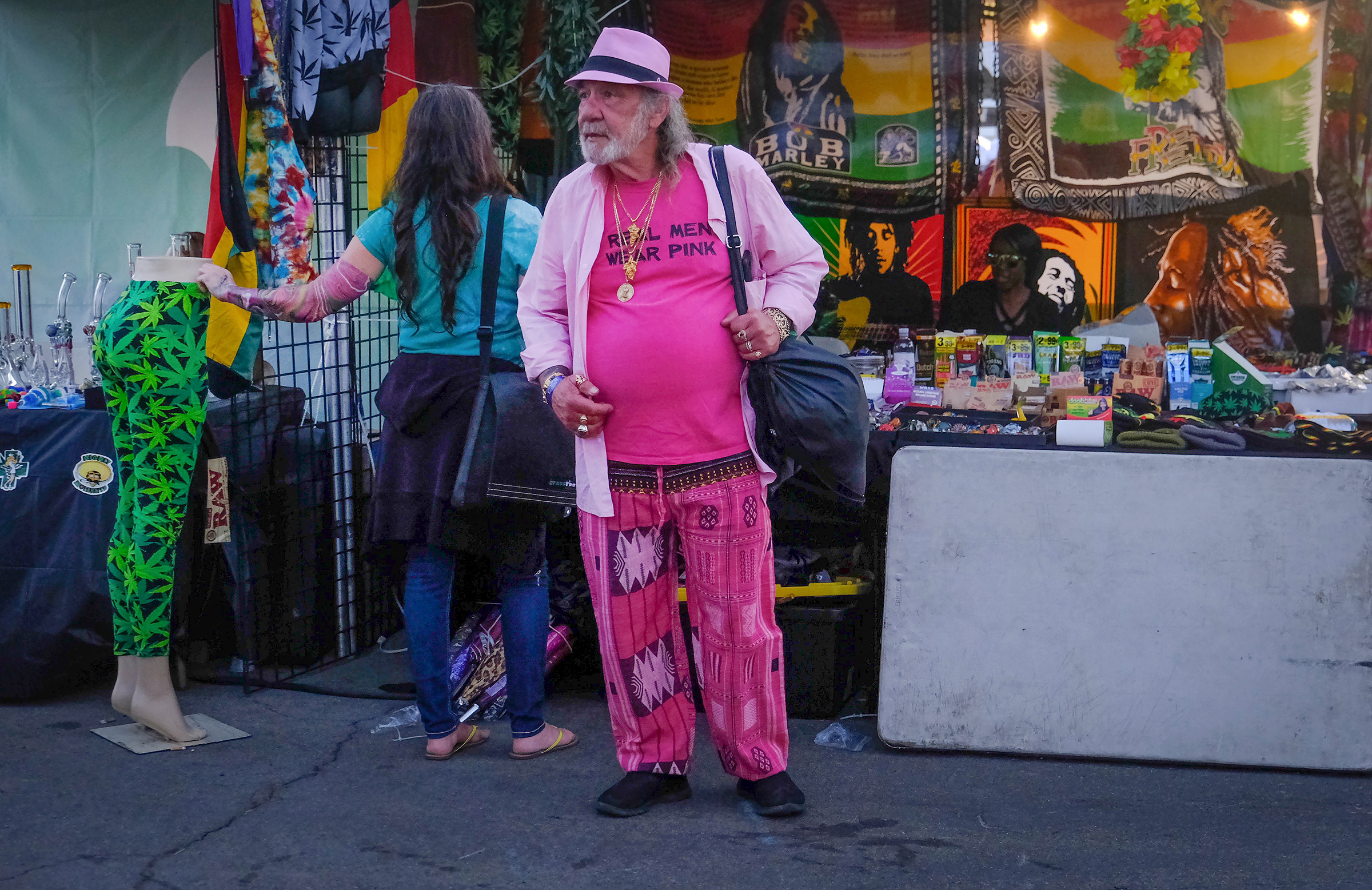 Cannabis legend Eddy Lepp added his own splash of color to the event. (Kurt Hegre for Leafly)

Vendors are offering free dabs, $1 dabs, dabs for dollars that benefit the homeless. If you’re not familiar with dabs, this is a great opportunity to learn about consuming the multiple, myriad forms of potent cannabis concentrates. Dabs are proving to be perfect for events like the Cup, allowing attendees to sample in comfortable amounts.

Pre-rolls are great for smoking while strolling the grounds or enjoying in front of the concert stage. Joints of all strains and stripes are going for $5, $10 and $15 at various booths. One vendor is selling pre-rolls for a penny if you follow its brand on Instagram. Vape pens (250mg of CBD for $20 from one vendor) are also popular mobile options. 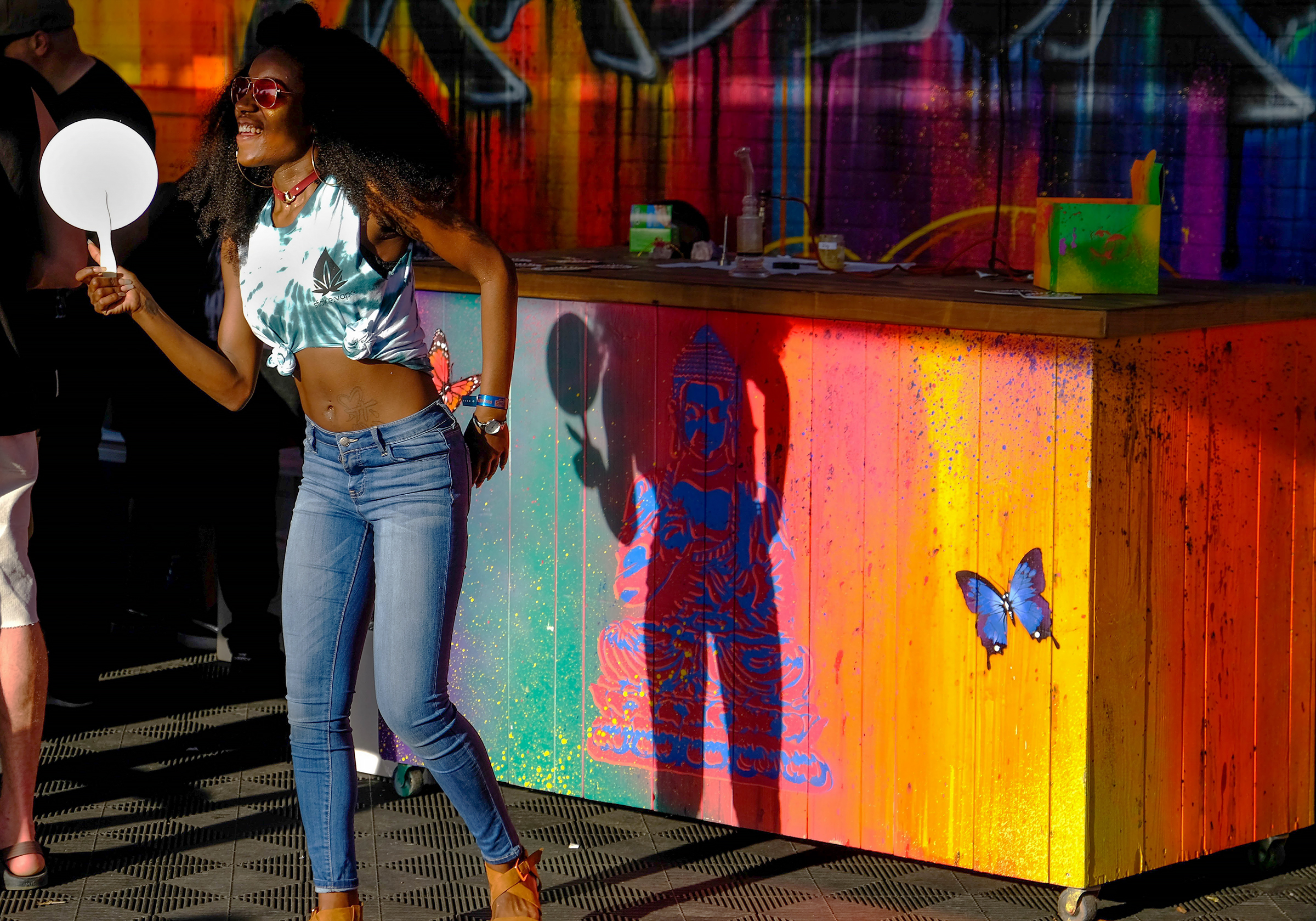 Some vendors are selling $30 eighths, but prevailing event prices are pretty close to California retail store prices, around $50 per eighth. 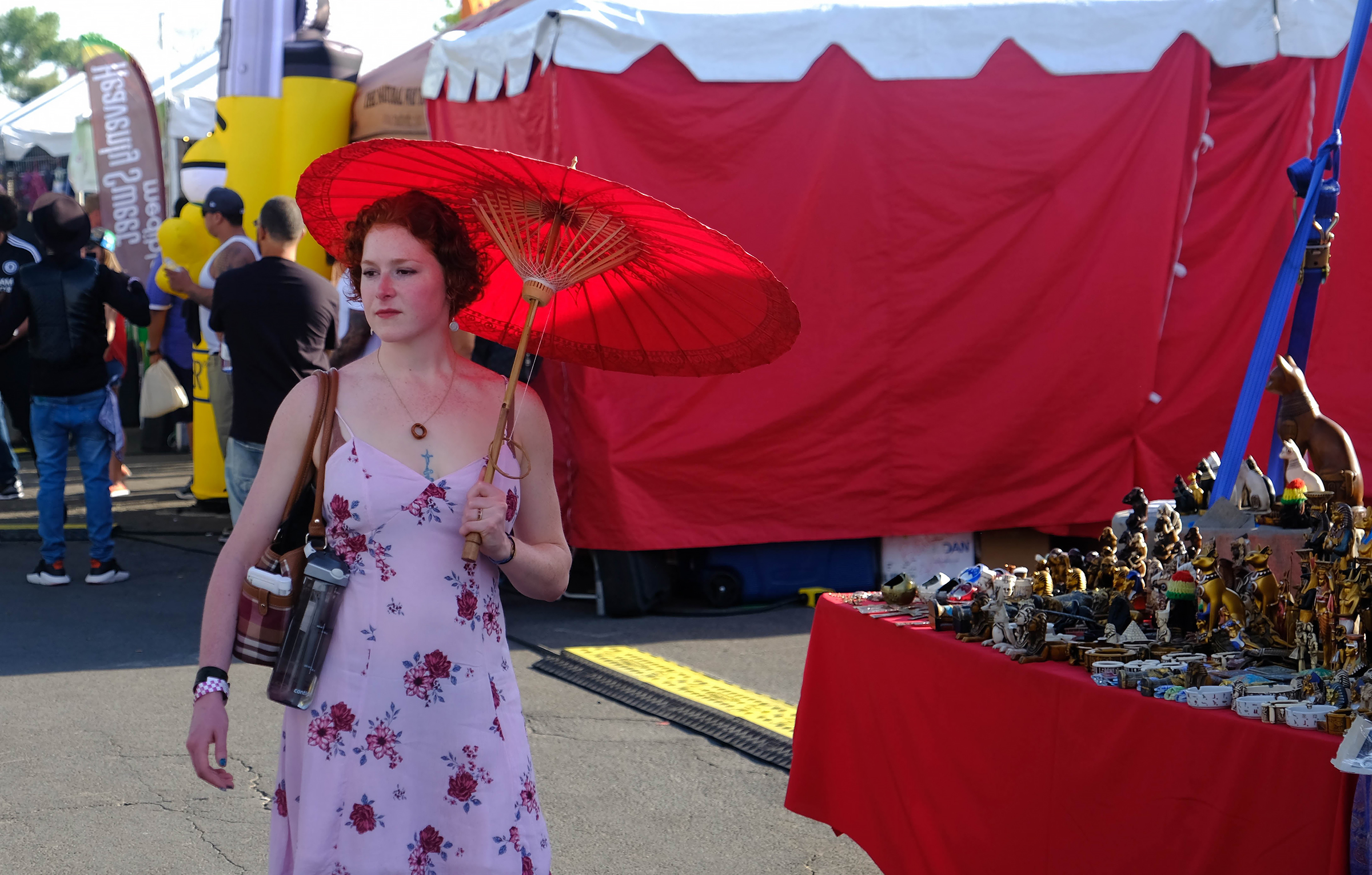 Even though they advertised their presence in a local newspaper, no Sacramento cannabis retailers were vending at the Cup on Friday. Two retail store owners told me they were told they couldn’t sell at the event because a City of Sacramento ordinance prohibits cannabis stores from operating outside of their permitted physical addresses.

Prior to granting event approval, Sacramento lawmakers drew some security concessions from event organizers. One was a wristband mechanism to mark and monitor attendees’ purchases so no one exceeds the state’s daily one-ounce purchase limit. Organizers also agreed to conduct bag checks at every exit to ensure no one leaves the event with more than the one-ounce possession limit. Neither a wristband system nor bag checks at exits were in effect on Friday.

All the vendors I talked to said they were individually responsible for enforcing purchase limits at their own booths. None had heard of the wristband system. A Cal Expo cop told me exit bag checks were scrapped when someone read the California Penal Code and found out that while bag checks entering an event are legal for security purposes, bag checks exiting events invade people’s privacy.

If anyone bought weight, I didn’t see it. Like me, most attendees I observed enjoyed dabs and joints onsite. There was a lot of confusion about operational matters, but things operate smoothly. 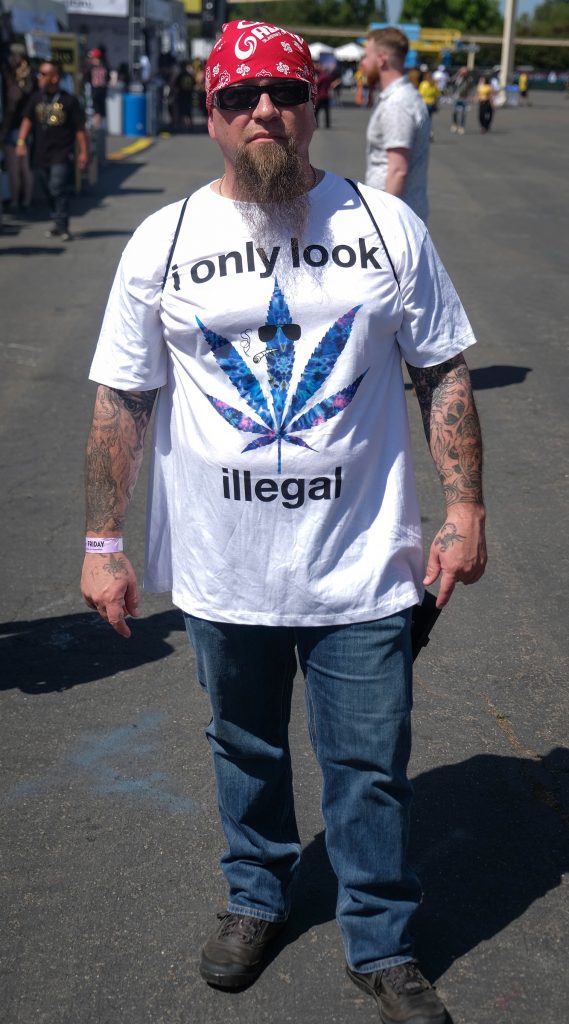 Sacramento’s cannabis czar, Joe Devlin, director of the city’s Office of Cananbis Policy & Enforement attended the event on Friday. One Cal Expo cop told me investigators and regulators from the California Bureau of Cannabis Control were undercover inside the event Friday, but said Cal Expo police were not patrolling inside because his bosses feared State Fair officers might file a workers’ comp claims alleging negative effects from secondhand cannabis smoke.

Cal Expo cops remained outside the venue entrance and worried more about keeping parking lot traffic under control when people left. Non-law-enforcement Cal Expo event staff roamed grounds with amused looks on their faces. Cal Expo cops told me at 10 p.m. Friday that there’d been no arrests, no reports of illicit sales, no violence, just two people ejected for gambling and a few people trading wristbands and entering through a hole in a fence. 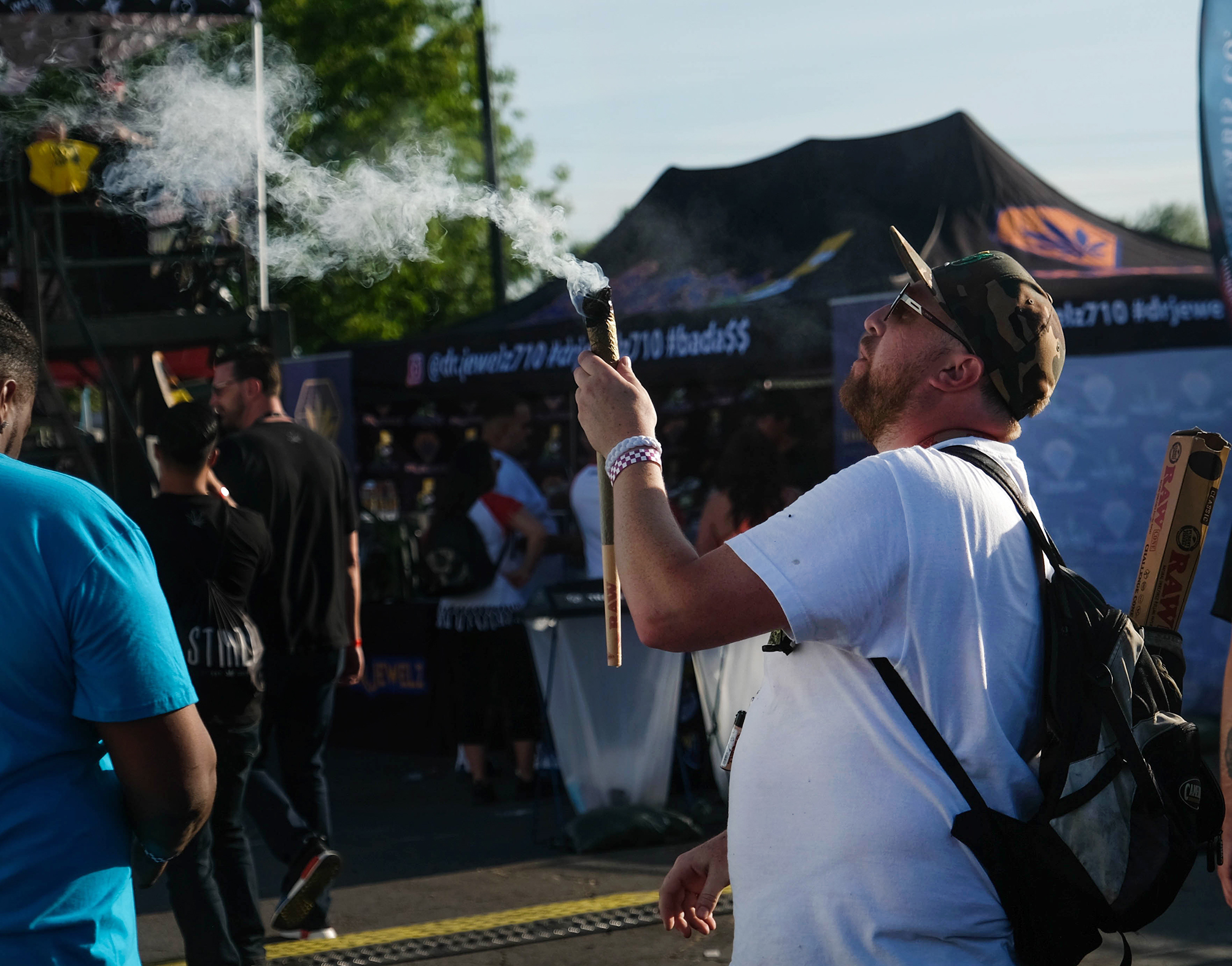 The High Times Sacramento Cannabis Cup continues today with scheduled performances by Cypress Hill, Lauryn Hill and Lil Wayne. In addition to onsite sales and consumption throughout the venue, there will be an industry awards ceremony for growers and manufacturers. Ride the Ferris wheel and slide the giant slide. Pet some animals and paint your body. One thing attendees didn’t do Friday and probably won’t do today: stand in line for portable toilets. No beer is served, so no lines form.

All photos: Kurt Hegre for Leafly. 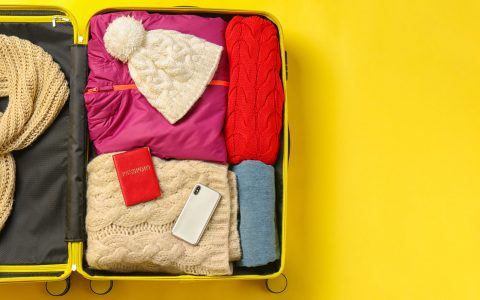 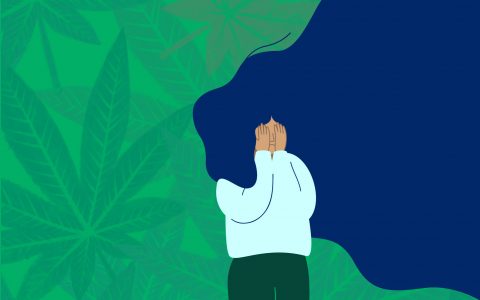