Watch This: Stoned People Get to Meet a Sloth and Their Minds Are Blown 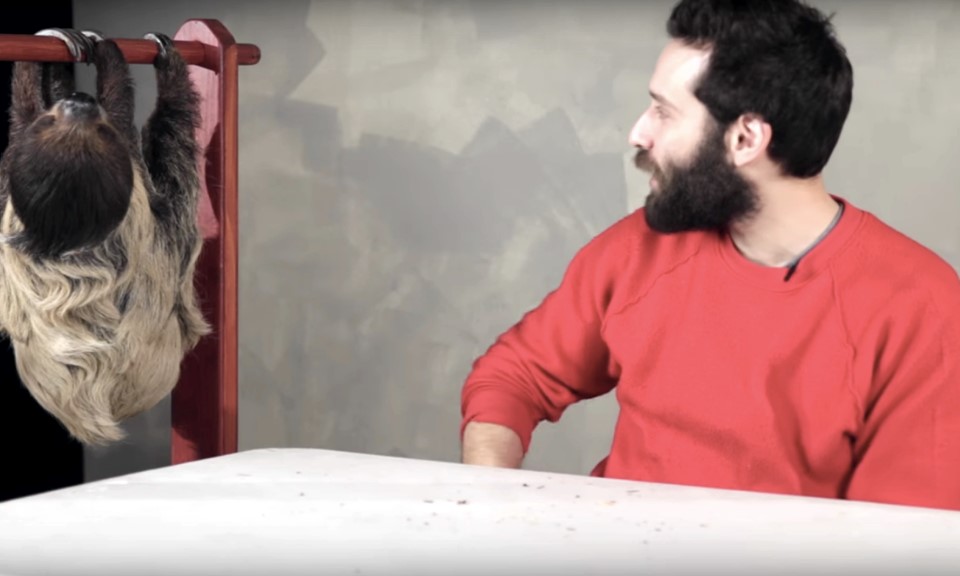 When I was in college, I was hunting for a second job and applied at a local coffee shop, despite the fact that I didn’t (and still don’t) drink coffee, because I was desperate for a decent-paying gig so I could afford to buy my textbooks. The interview was going well and I was doing a pretty solid job of faking my love for a beverage I didn’t imbibe, but then my interviewers dropped this “fun” question on my lap at the end of our meeting:

“If you could be any animal, what would you be?”

Without skipping a beat, I responded, “That’s easy: a sloth.”

Their smiles faded, and one of my interviewers narrowed his eyes before countering, “Aren’t they lazy?”

I said, “Well yeah, that’s the point. They have the most chill life — all they do is eat, hang out, and sleep.” As a stressed out college student who was putting herself through college with a full load of classes while juggling one job and in the process of applying for another one so she could make ends meet, transforming into an animal whose primary purpose in life was to be as relaxed as possible at all times was all-too appealing.

Seriously, look at this lil’ guy. Best life ever.

My interviewers politely countered that most applicants respond with “cheetah” or “lion” or some other majestic, hard-working creature, but I held firm on wanting to be a sloth. They’re my favorite animal. Any other option would be out of the question.

I didn’t get the job. Perhaps it was because they could tell I was a closet non-coffee drinker, but their clear disappointment in my answer to their stupid hypothetical question seemed to seal my fate. I didn’t see how — I was going to be serving coffee and pastries, not competing in the 100 meter dash, plus I figured they’d know that I was savvy enough to separate my work ethic from this fantasy scenario, but alas, not everyone is Kristen Bell.

Fortunately, there are others in the world who share my affinity for sloths, and according to this Buzzfeed video, many of them are of the cannabis-friendly variety. The company interviewed a handful of people who were, quite frankly, pretty frickin’ stoned, asking them how high they were and what type of animal they feel like before surrepticiously bringing out a sloth hanging from a bar and waiting for their subjects to notice the cavalier creature.

They noticed, and their minds were quite appropriately blown. My favorite reaction came from the Paul Rudd-looking dude who reacted exactly the way I would have, by shouting, “WHAT!”, then apologizing and saying, “I’m so sorry, are you not supposed to yell at these?” before blurting out a “Thanks!” for this rare and unexpected gift.

Watch and enjoy–and if you’re the dudes who interviewed me at that coffee shop 13 years ago, my answer hasn’t changed since then because sloths are still awesome.