We Caught Up With Tacocat’s Emily Nokes Pre-Show. Spoiler: She Totally Rocks 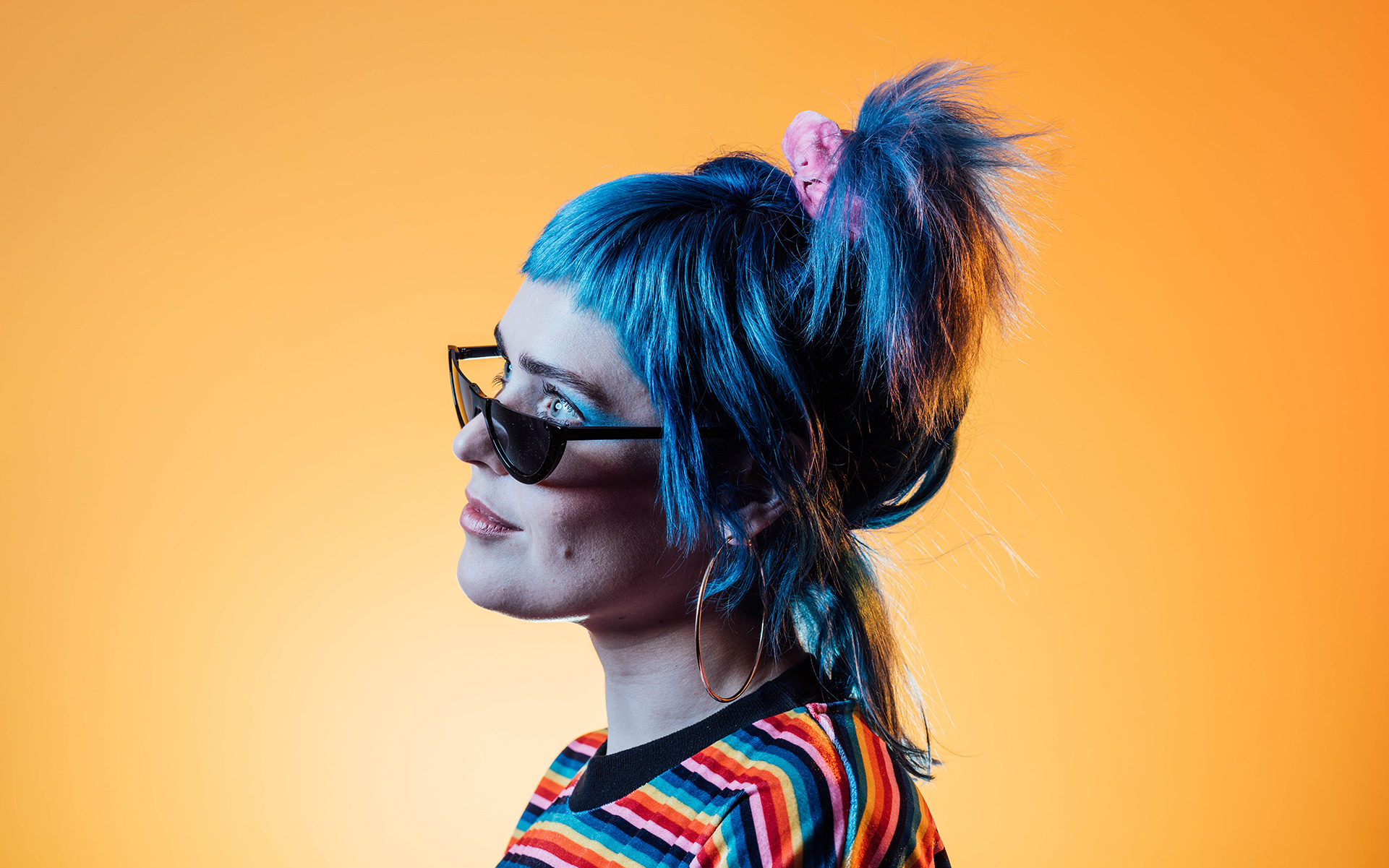 A brief moment of calm for Emily Nokes before taking the stage and rocking faces off. (Grant Hindsley for Leafly)
If the golden rule of rock and roll is irreverence, then Seattle’s Tacocat are masters of the craft. For over a decade, the band has churned out a series of frenetic and whimsical pop-rock releases that, for all their infectious playfulness, also address contemporary feminism with a sharp and unflinching eye. Throughout their career, Tacocat has also put their love of cannabis front and center, on songs like “Volcano” and “Psychedelic Quinceañera.”

We caught up with Tacocat front woman Emily Nokes, who is also the music editor of the acclaimed feminist magazine BUST, in advance of the group’s show at legendary Seattle public radio station KEXP’s Concerts at the Mural series. Beyond sharing wild stories from life on the road, Nokes was eager to discuss the challenges of making art in the age of Trump, her love of low-THC strains, and even her aspirations to design a line of cannabis paraphernalia.

See Dispensaries in Your Area

This August, Tacocat will depart on their next tour across the US—be sure to catch a dose of their giddy sugar-rush rock at a venue near you. 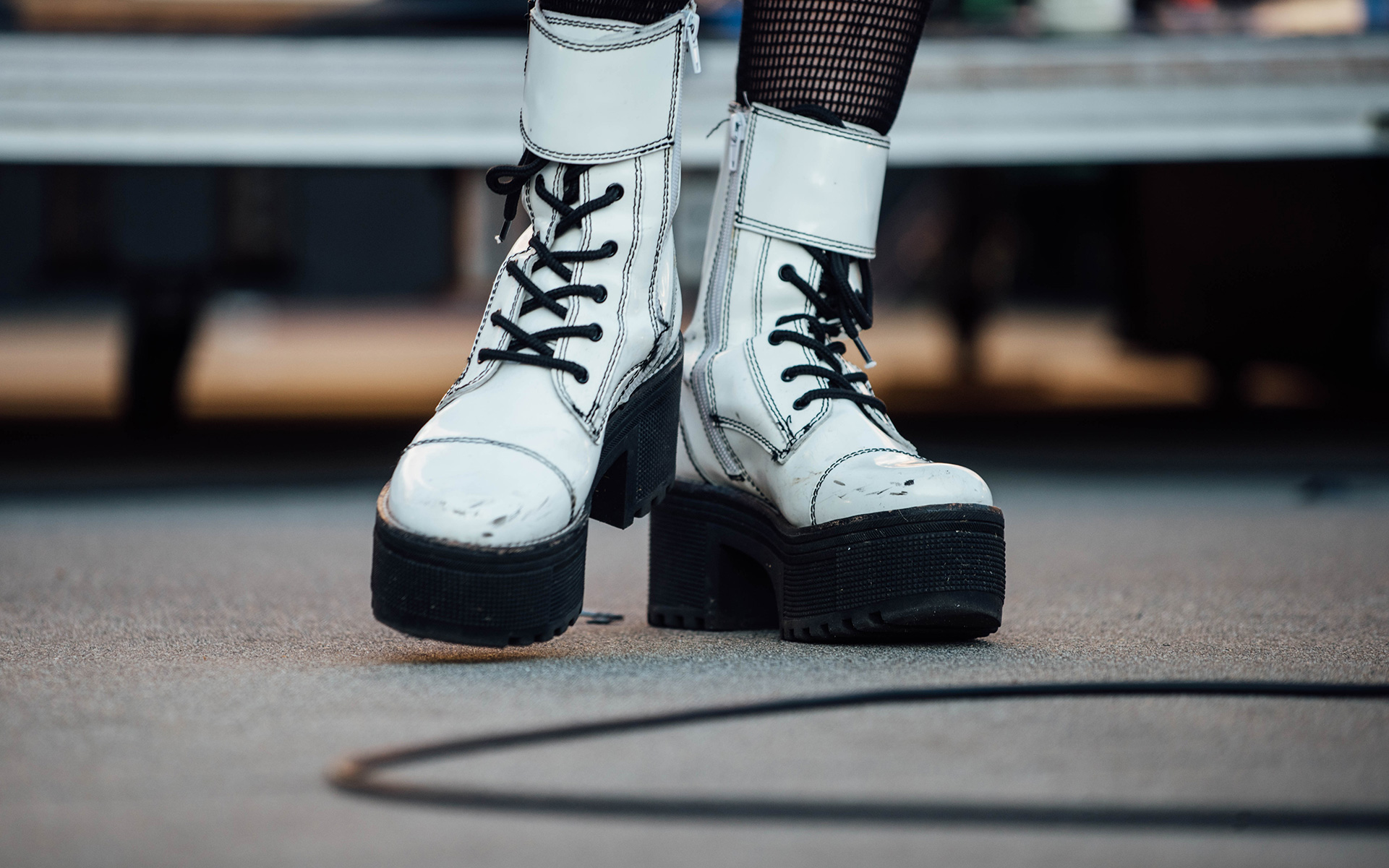 MSL: I heard that you grew up in Butte, Montana! Was there a lot of cannabis stigma there?

EN: Oh yeah. It’s a small town. In high school you could wait at the playground for five hours and some guy might bring you some shake. It was never an easy experience (laughs). Even when I moved to Seattle, I still didnt know how to get it very well. If I ever found any, I’d buy a lot so I never had to do it again.

I love your song “Volcano.” Do you have any particular memories of that vaporizer?

We were obsessed as a band with the Volcano. It’s the Ferrari of things you can do with weed. It’s so expensive and insane looking.

My younger sister lived in Missoula, and her household got one. I have this vivid memory of her—she’s only two years younger than me but she always seemed too young to party with—during her freshman year of college. I went to Missoula with the band, and she rolled out on the wooden floor of her apartment with the Volcano in her hands. Oh my god, I was so impressed! Every time we’d come through Missoula we’d borrow the Volcano and use it all day, all night, as much as we could. When Twitter first became a thing we tried to get at the Volcano company, but we never got a free one.

Do you have favorite music to listen to when you’re high?

I get to listen to all this music for my job [at BUST]. My life is so saturated with going to shows and playing shows; it’s not like in college when I had three albums I listened to on repeat. I try to not get too stoned when I’m working, though, otherwise I think about it way too much.

Does it ever feel like a conflict of interest, being in a band and writing about music professionally?

It would be a conflict if my band has toured with that band, but you write about jazz and hip-hop and what’s happening in other parts of town, too. I live and breathe this stuff, so being in the field helps. I’m very diplomatic about it: Sometimes I’ll put in a disclaimer, or assign it to someone else. 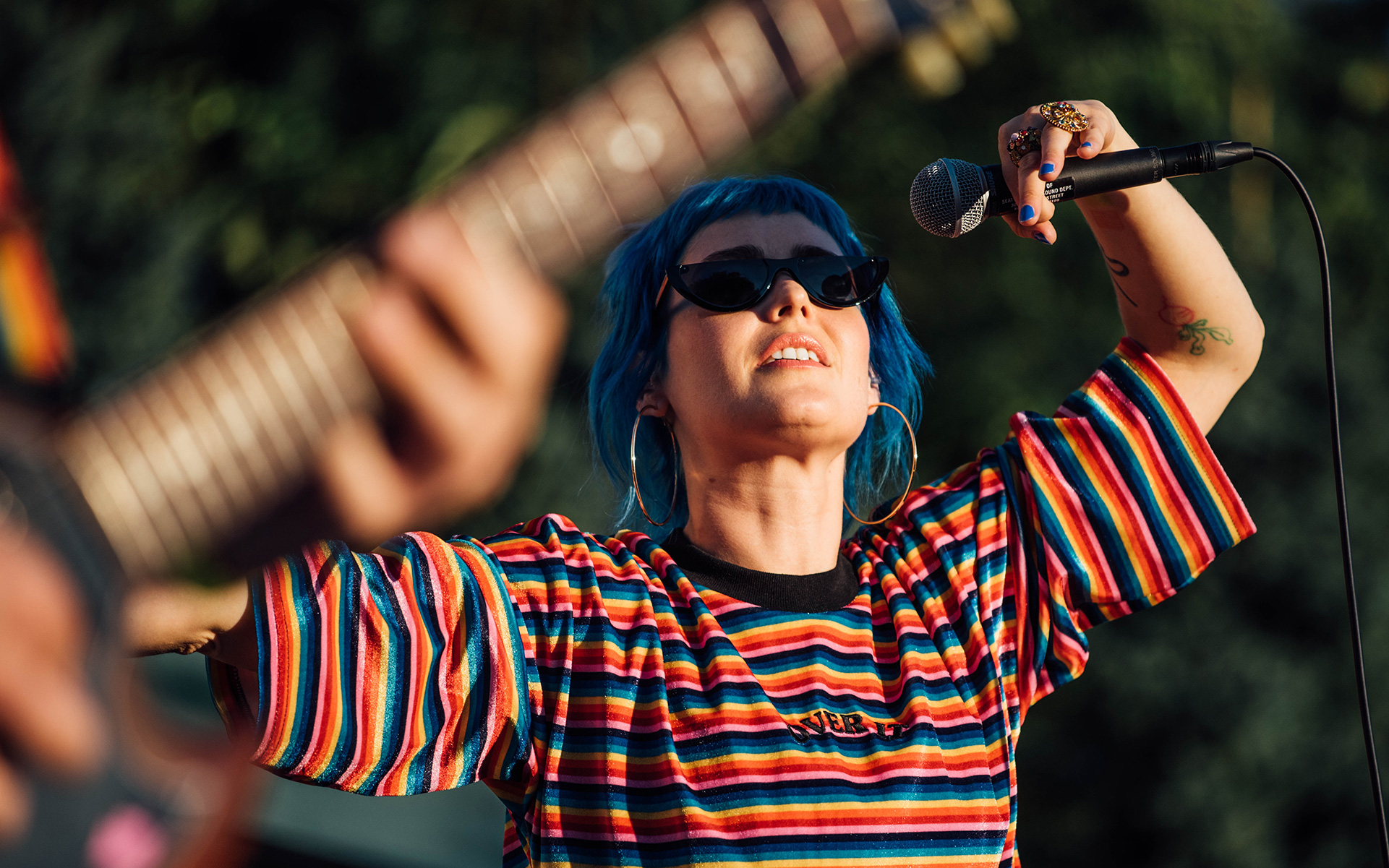 What are you listening to now?

It’s sort of nepotism-y but there’s this band Lala Lala, who are on our record label. I was just listening to them a few minutes ago.

Did cannabis factor into the writing process of your next (and nearly finished) album?

It’s been really helpful. Sometimes I get stoned and nothing happens, but I’ve also been spending a lot of time alone, smoking weed and going for walks with a notepad.

It’s a hard time to make art, in my opinion. There was this idea that [with Trump], art was going to be so good. Maybe, if you want forty minutes of screaming. Crawling out of a post-election depression hole, I had to remember what makes me happy, and weed plays into that. It’s been part of my life since I was fifteen, and my bandmates’ too. We can still have fun and have these moments when we’re babbling and saying the funniest stuff and eating great snacks (laughs). It was a way to get back into my creative brain.

I’m very, very careful. I take one puff. I go into the pot store and I’m not shy about asking for the lowest THC product that’s not a hemp necklace. I don’t want to be fucked up; I want to be able to interact with the self-checkout machine without having a meltdown.

Find Legal Pot Stores Near You

I like CBD-heavy strains. I have different pain management things going on. I found one recently called Suzy Q that I can smoke all day. I smoked a different strain last night at 4 when I couldn’t sleep called Middlefork. My partner really likes it. I was just trying to get back to sleep, and then I said, ‘I want to make a Pyrex dish that’s orange with dried ramen around it that’s spray painted gold!’ Then I finally got back to sleep (laughs).

Do you bring cannabis on the road when you’re touring?

We’re comfortable with it except for crossing certain borders, like one in particular that’s fucked up, that’s there to catch undocumented immigrants. It’s a human rights violation and they’re fucking assholes. One time we got sponsored by JUJU Joints here, one of first handheld electronic joints. This was before PAX, and we were giving them to our friends who had never seen anything like it. We smoked as much weed as possible before crossing that border. So we get pulled over and the guy says, ‘Get out of the van.’ We were so stoned but we knew we’d cleared everything out. He put a drug dog in there. Bree [McKenna, Tacocat bassist] was so high she said, ‘Officer, we have a no riding dirty policy.’ I was like, what are you saying??

He told us, ‘My dog smells marijuana. I can tell you have expensive musical equipment in the back, and my dog is gonna go back there and rip it up.’ [That didn’t happen], and finally he let us go. Two days later, we found one of those joints in a backseat pocket. 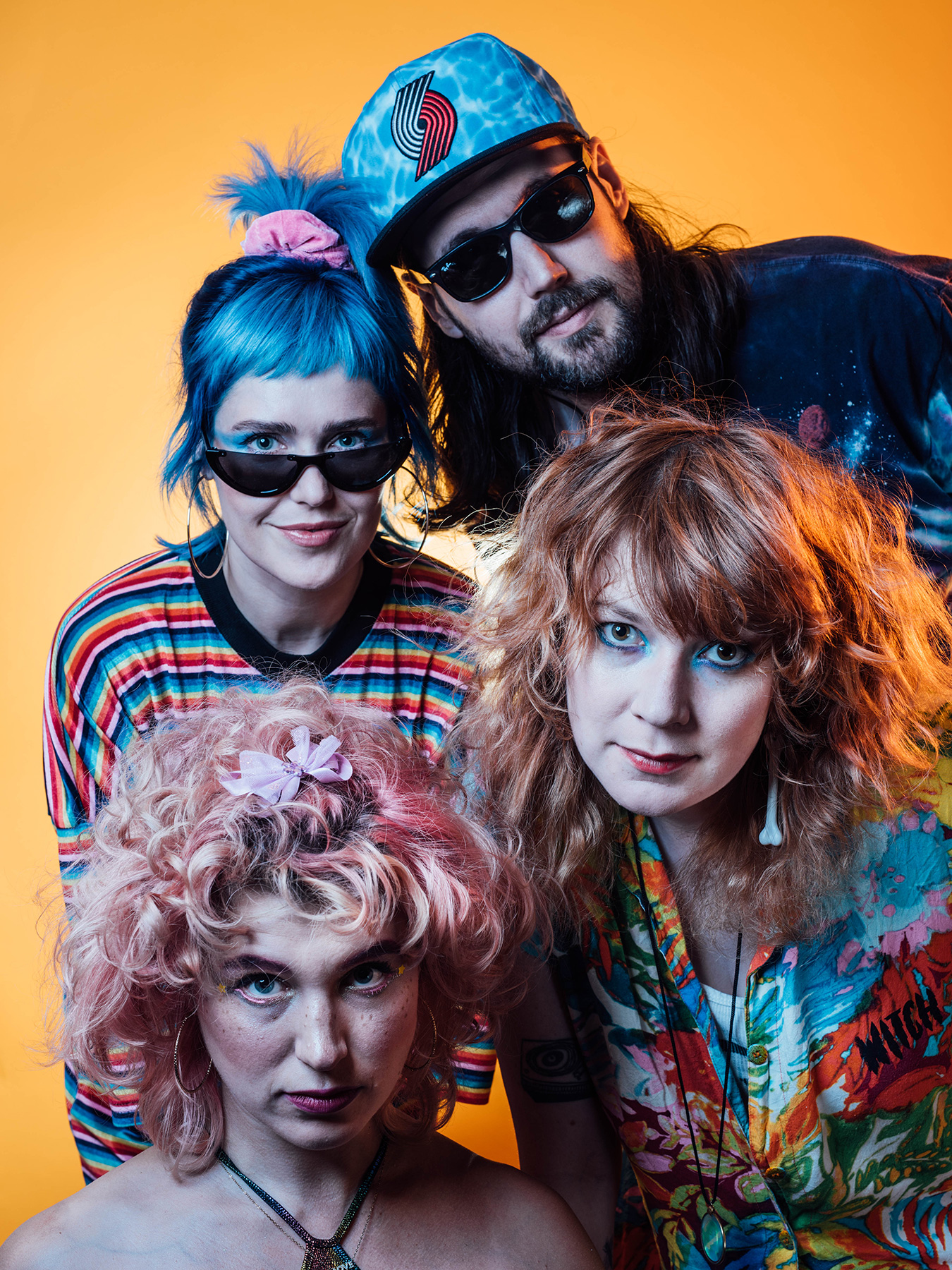 That’s insane! Before we wrap up, is there anything you want to add about marijuana, or otherwise?

Yes! I had this idea recently: Our whole lives we’ve been surrounded by this weed paraphernalia; first it was Bob Marley imagery and glass pipes that are Burning Man-y, and now they’re sleek and metal and look like they were made by Microsoft. It’s all very masculine, all invented by boys. Me and Lelah [Maupin], our drummer and my best friend, we want to make our own brand of weed paraphernalia that’s all purples and pinks and teals. Smoking is a ritual, so you want it to be pretty. Or at least more pleasing than a brushed steel vape pen, or a wizard bong (laughs). We hope to make our own line of dazzling products for our friends, and not just dudes.

Amazing. What are you gonna call it?

I don’t know, but we’re going to have to have a Volcano session and think about it (laughs).

Need Some Edibles for an Upcoming Show?