Bruce BarcottMay 12, 2017
Share
Share on Twitter   Share on Facebook
Print
Attorney General Jeff Sessions addresses the crowd with opening remarks during a Drug Enforcement Administration (DEA) 360 Heroin and Opioid Response Summit at the University of Charleston, Thursday, May 11, 2017, in Charleston, W.Va. The event, which was sponsored by the DEA, Community Anti-Drug Coalitions of America and the University of Charleston School of Pharmacy, was held to provide solutions and strategies for combating the heroin and prescription drug abuse epidemic. (AP Photo/Sam Owens)
On the day he issued a two-page bid to revive the federal government’s failing war on drugs franchise, US Attorney General Jeff Sessions stepped up to a lectern in West Virginia to address a conference on America’s opioid crisis.

Sessions sees a nation keening with 52,000 overdose deaths and scolds us for our 'complacency.'

“We’re on a bad trend right now,” Sessions told the audience at the University of Charleston  on Thursday. “We’ve got too much complacency about drugs. Too much talking about ‘recreational drugs.’ That’s the same thing you used to hear in the 80s. That’s what the pro-drug crowd argued then. But we realized from reality—empirical fact, neighbors, friends, crime, that this was not a legitimate thing.”

It was an extraordinary moment. Sessions spoke to West Virginians living in the heart of heroin country, where 864 people were killed by opioid overdoses last year. The conference was all about the opioid crisis. And yet he chose to bang his shoe against…cannabis? (Nobody talks about heroin as a ‘recreational drug.’) This in a state where—only three weeks ago—legislators and the governor proudly legalized medical marijuana under West Virginia law. 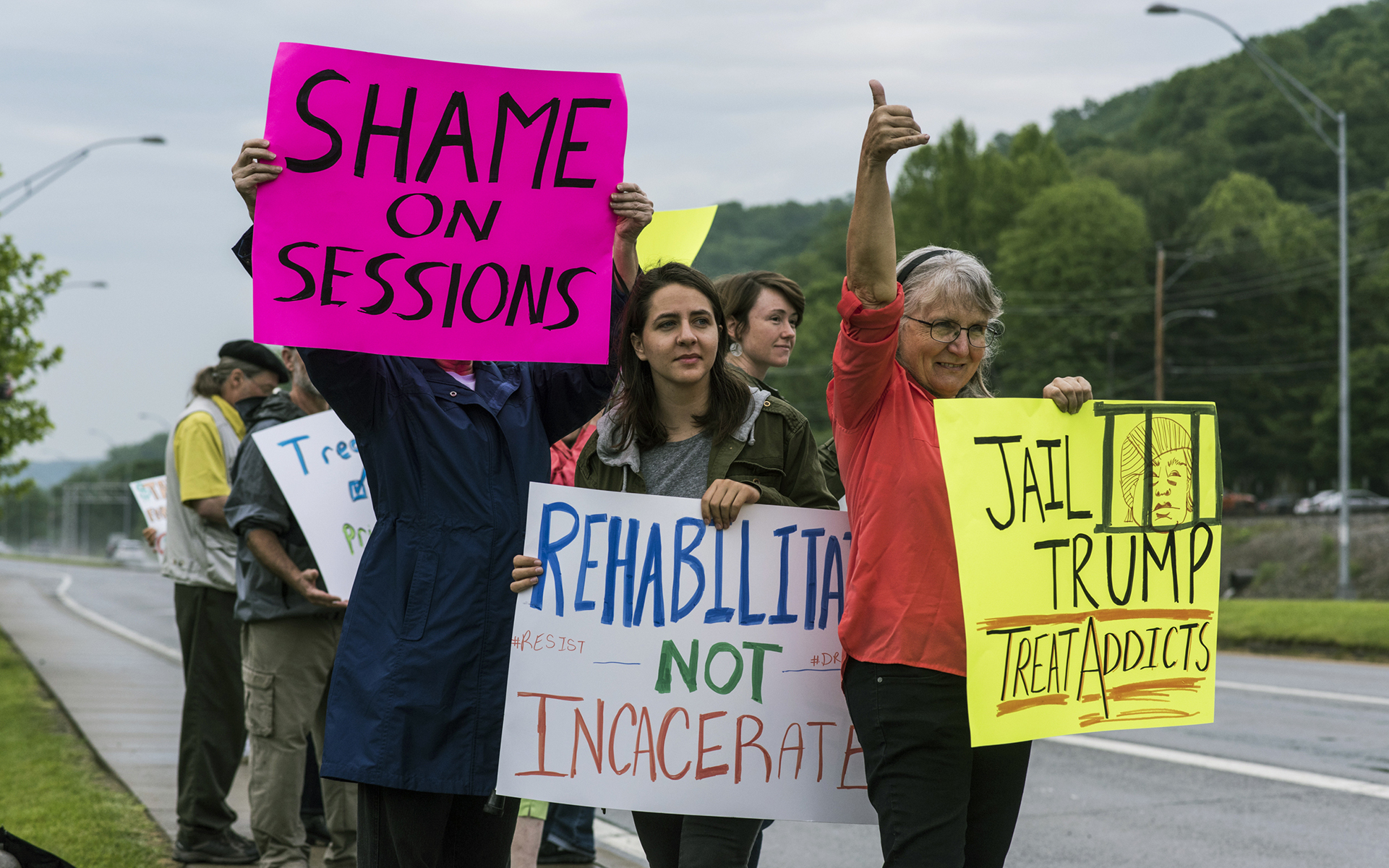 Protestors hold up signs awaiting the arrival of Attorney General Jeff Sessions at the DEA’s 360 Heroin and Opioid Response Summit at the University of Charleston on Thursday. (AP Photo/Sam Owens)

After Sessions’ speech, federal prosecutors received fresh marching orders from the new boss. The Sessions sentencing memo, as it will surely be known, orders US attorneys and their subordinates to “charge and pursue the most serious, readily provable offense” in nearly all cases, “including mandatory minimum sentences.”

Those are the sentences that gave America the dubious honor of being the nation with the world’s highest incarceration rate, and did nothing to stanch illegal drug use or prevent the opioid death spiral so many communities are now experiencing. Sessions sees a nation keening with 52,000 overdose deaths every year and scolds us for our “complacency.” His answer? Bring back the days of D.A.R.E., “Just Say No,” and hard prison time for two joints.

This franchise reboot will fail.