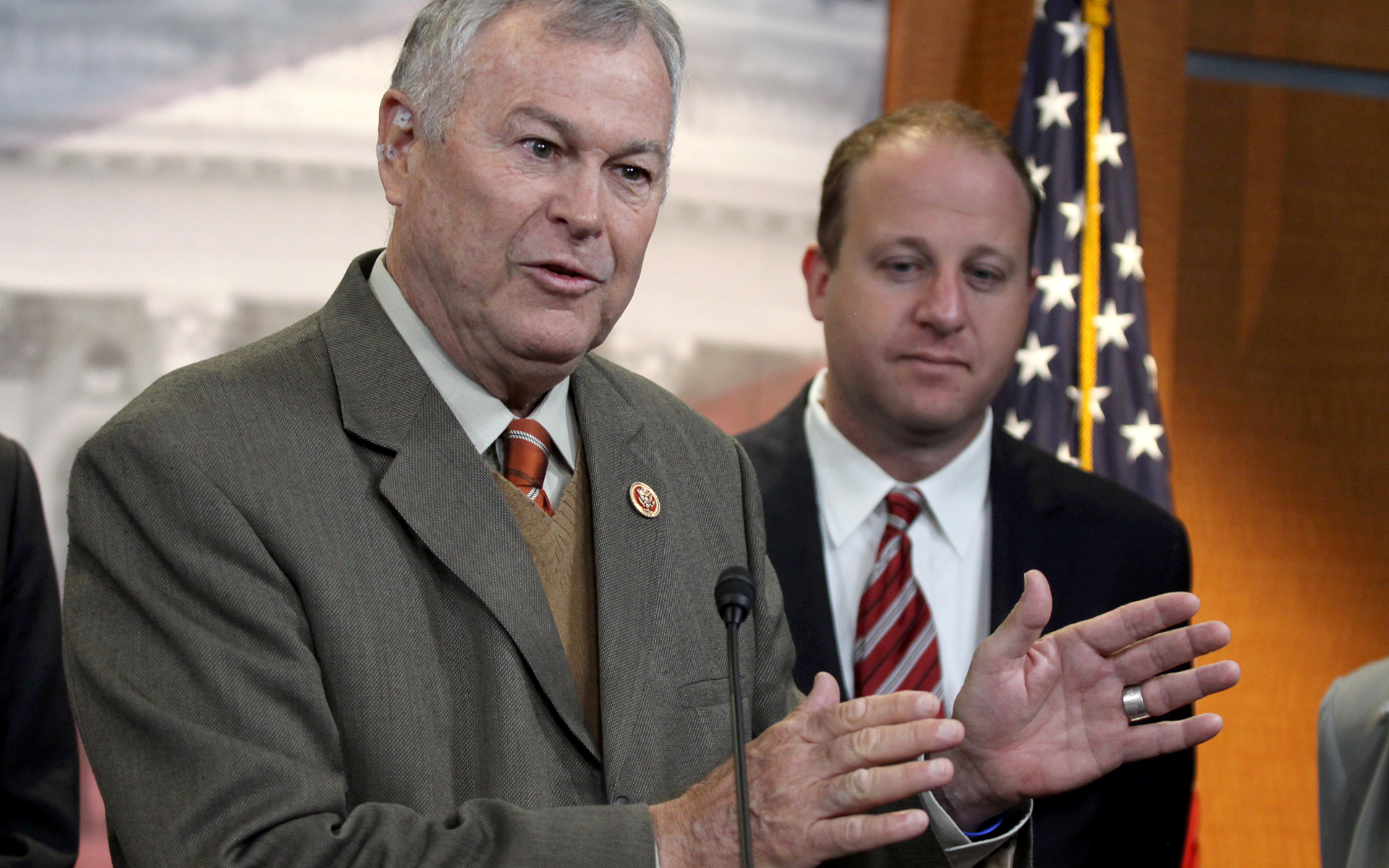 Two days of lobbying by Rep. Dana Rohrabacher (left), seen here with Rep. Jared Polis, couldn't save his amendment.
In a significant blow to medical marijuana advocates, patients, and cannabis companies around the nation, the House Rules Committee has blocked protections for MMJ patients and banks that want to serve state-legal cannabis businesses.

The Rohrabacher-Blumenauer amendment (a spending bill amendment that prevents the Department of Justice from using its budget to arrest or prosecute people acting in accordance with state medical marijuana laws), and a number of other proposals, including one to protect banks serving legal cannabis businesses, were rejected by the committee in a Wednesday session that stretched into the night. The actions mean the Rohrabacher-Blumenauer amendment, a version of which has protected MMJ patients since 2014, will not proceed as part of the spending package to a vote by the full House. Previous versions of the same medical marijuana protections have passed with wide margins in the House; the current version of the amendment is scheduled to expire at the end of September.

Rep. Dana Rohrabacher, the California Republican who has long championed the rights of medical marijuana patients, spent much of the past two days lobbying his fellow Republicans to support the measure. As Molly Hooper reported in The Hill earlier today:

At a Wednesday morning closed-door briefing of House Republicans, California Rep. Dana Rohrabacher (R) implored his GOP colleagues to press House leaders to allow a vote on his amendment. Fellow Californian Rep. Duncan Hunter told The Hill that after Rohrabacher “talked about it this morning in conference,” GOP leaders said “it splits the conference too much so we’re not going to have a vote on it.”

Rohrabacher’s Washington Post op-ed. headlined “My fellow conservatives should protect medical marijuana from the government,” ran in the paper’s Tuesday edition. The conservative lawmaker wrote about the schism between some in his party over the issue:

Unfortunately, my longtime friend Jeff Sessions, the attorney general, has urged Congress to drop the amendment, now co-sponsored by Rep. Earl Blumenauer (D-Ore.). This, despite President Trump’s belief, made clear in his campaign and as president, that states alone should decide medical marijuana policies.

Rohrabacher followed up with an impassioned pitch to his colleagues on the House floor on Tuesday night. Without the amendment, he said, “we’re changing the status quo in a way that undermines the rights of the states and the people” to set their own cannabis policies.

Wednesday’s action was a setback, but it doesn’t mean the measure is dead. A version of the same MMJ protections is included in the Senate appropriations bill that was approved in July. That means the Rohrabacher-Blumenauer language might survive in the final version of the bill hammered out in a joint House-Senate reconciliation committee.

Rep. Earl Blumenauer (D-OR), the amendment’s cosponsor, noted in a tweet that a vast majority of Americans and members of Congress supported the rights of medical marijuana patients. The House Republican leadership, though, did not want the amendment to proceed to a full House vote. Rep. Pete Sessions (R-TX), the House Rules Committee chairman, used a similar maneuver to block the progress of the Veterans Equal Access amendment back in July.

This isn’t over! As House & Senate finalize funding bill, we will fight for patients & to continue critical medical marijuana protections.

In addition to blocking Rohrabacher-Blumenauer, Rep. Sessions and the Rule Committee also blocked consideration of a number of amendments that would have improved the state-legal cannabis environment. Those included the amendments proposed by Rep. Denny Heck (D-WA) that would have prohibited funds from being used to penalize a financial institution for serving a legitimate marijuana business that abides by state law. The Rules Committee also blocked proposals to protect state-legal hemp programs, ease federal restrictions against scientific research on cannabis, allow the District of Columbia to implement regulated adult-use sales, and protect the eight states where the adult use of cannabis is legal.

Wednesday’s actions by the House Rules Committee left many in the legalization movement momentarily deflated, but ready to fight for the measure in reconciliation with the Senate. “Unless Congress chooses the Senate budget version, millions of seriously ill patients and the legitimate businesses that provide them with safe access to their medicine will be at risk of prosecution,” said Don Murphy, director of conservative outreach for the Marijuana Policy Project. “This vote is a slap in the face of patients, their families, their elected representatives, and the 10th Amendment.”