Is Bernie Sanders still ahead of the curve on cannabis? 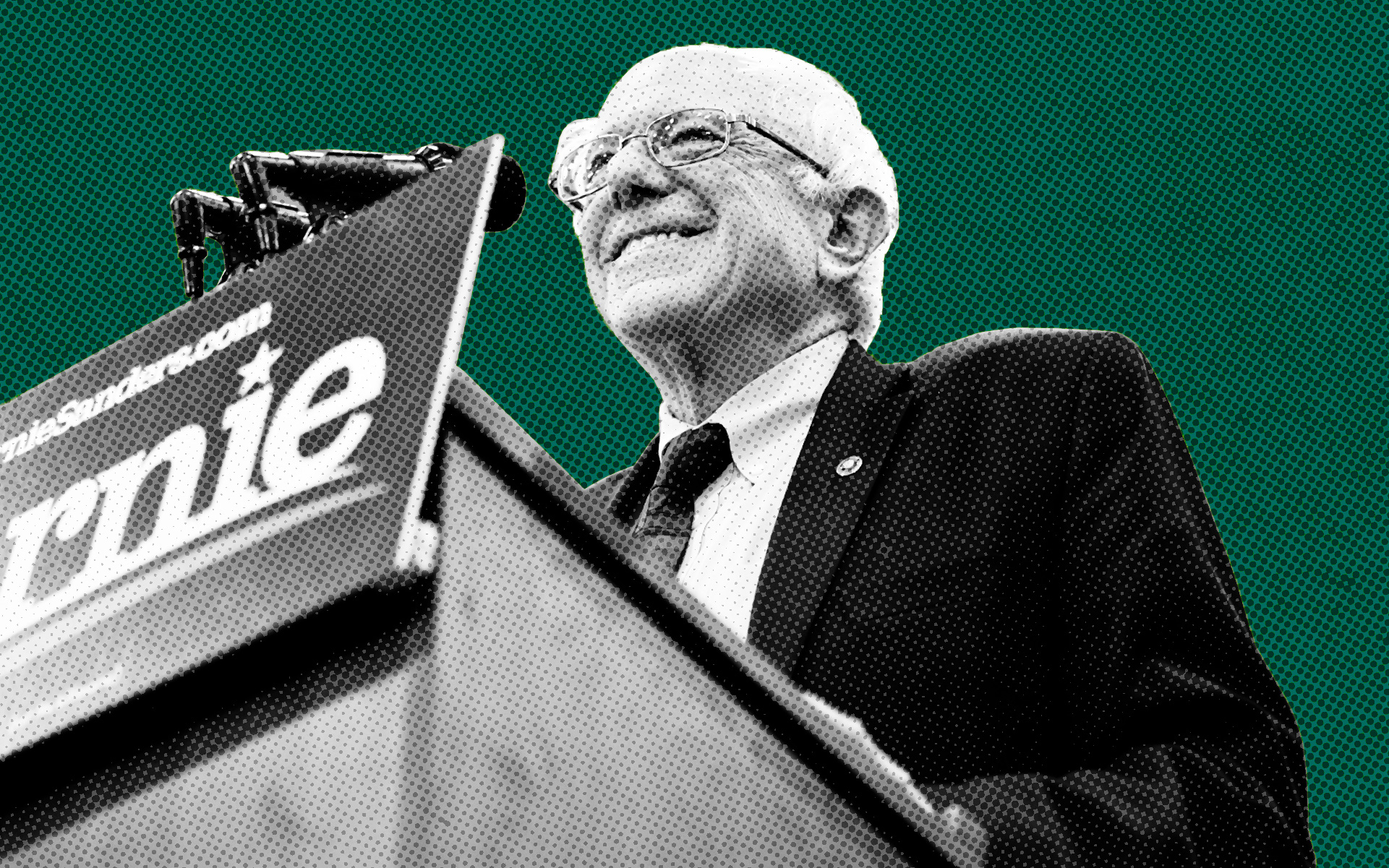 Bernie was a pioneer of cannabis decriminalization, and he introduced the first major legalization bill in Congress. But it that enough in 2019? (AP Photo/Meg Kinnard)

When Bernie Sanders called for national cannabis legalization in 2015, he was the first major party presidential candidate in history to do so.

That was exactly one election cycle ago, but it feels like an eternity—particularly when you consider that today 66% of Americans back this once-radical policy position, as does every Democratic 2020 presidential candidate this side of Joe Biden and Mike Bloomberg.

Sanders has long been out in front of the cannabis curve. But in late 2019, is he still at the forefront of the issue?

Let’s start with a little history

In 1968, four years after graduating from the University of Chicago, the Brooklyn-born Sanders moved to Vermont as part of a pronounced back-to-the-land counterculture migration. Still speaking with the thick Brooklyn accent of his youth, he left the big city behind and embraced rural life in a small New England town. He also hung around at hippie communes, demonstrated against the Vietnam War, ran in some heavy socialist circles and wrote articles for the local alternative newspaper.

'I smoked marijuana but was never part of the drug culture. That wasn’t me.'
Bernie Sanders, on how he spent the sixties

Sanders clearly experienced the era’s legendary cannabis scene firsthand—though only through osmosis. While the budding young politician was no doubt in a lot of smoky back rooms, he didn’t often get high.

“My hair was long, but not long for the times,” he told New York magazine in 2014. “I smoked marijuana but was never part of the drug culture. That wasn’t me.”

Did he inhale? Of course!

Sanders inhaled on just two occasions—and then stopped “because I coughed my guts out.” Sanders added: “It’s not my thing, but it is the thing of a whole lot of people.”

That last addendum is vitally important, because it’s what separates Bernie Sanders from the rest of the contenders for the Democratic nomination. He may not smoke weed, but he gets weed culture in a way none of the other candidates can effectively muster. (Okay, except Andrew Yang. That guy’s definitely down).

In fact, if there’s a cannabis equivalent to the “which candidate would you most like to drink a beer with” trope, it’s clearly the fired-up old hippie radical who’s personal friends with Cardi B. and Ben and Jerry.

Bernie Sanders spent much of the 1970s running as a perpetual third-party candidate for Vermont governor and senator. Then, in 1981, at the start of the “Just Say No” Ronald Reagan era, he was elected mayor of Burlington by just 10 votes after campaigning as a far-left socialist.

For the first time, Sanders held actual political power. And while he didn’t make cannabis legalization a top-line issue—at the time, only 25% of Americans supported that position—he quietly set a policy that kept the cops from harshing too many mellows.

“When I was mayor of Burlington,” Sanders recalled many years later in a Reddit AMA, “I can tell you very few people were arrested for smoking marijuana. Our police had more important things to do.”

In 1988, Sanders ran for Vermont’s single at-large congressional seat. He lost to a Republican, but came back and won two years later—making him the first independent-party candidate to take a Congressional seat in 40 years. After 16 years in the House, Sanders became a senator in 2007, and has retained his seat by large margins.

During his nearly three decades in Congress he’s had to work more indirectly when trying to shape cannabis policy—largely because the federal government’s cannabis policy has barely budged in all that time.

Back in 1995, a year before California became the first state to approve a medical cannabis law, Sanders co-sponsored a similar groundbreaking piece of legislation. His bill, HR 2618, never came up for a vote—but if it had passed it would have “provided for the therapeutic use of marijuana in situations involving life-threatening or sense-threatening illnesses,” and tasked the Secretary of Health and Human Services with taking “all necessary actions to secure and maintain a supply of marijuana adequate for the legitimate medical, research, scientific, and export needs of the United States.”

What President Sanders would do

More recently, as federal cannabis legalization has moved from a political pipe dream to a political inevitability, Bernie Sanders has remained a leading voice on the issue. Like many of his 2020 Democratic rivals, he’s sponsored or co-sponsored legislation to end federal prohibition, including the Marijuana Justice Act of 2019 and the 2019 Marijuana Freedom and Opportunity Act.

As a presidential candidate he’s now gone a step further, releasing a detailed three-step plan for implementing federal cannabis legalization in a way that prioritizes “vacating and expunging past marijuana convictions” and “ensuring that revenue from legal marijuana is reinvested in communities hit hardest by the War on Drugs.”

According to that plan, the process would begin with the appointment of an attorney general, Drug Enforcement Administration administrator and Health and Human Services secretary “who will all work to aggressively end the drug war and legalize marijuana.”

Then—within the first 100 days of his administration—President Sanders would de-schedule cannabis by executive order, removing it from the Controlled Substances Act entirely. This would not only de-facto legalize, it would also ensure that immigrants and visitors to the United States would no longer be denied entry or deported because of any past connection to cannabis.

After setting the stage for sweeping policy changes, the Sanders plan moves on to focusing on “expunging the records of those people who’ve been arrested for marijuana”—including allocating federal funds to help automate and expedite that process.

Congratulations to Seattle for clearing past misdemeanor convictions for marijuana possession that were prosecuted before marijuana was legalized. We must decriminalize marijuana nationally and expunge federal marijuana use and possession crimes. https://t.co/397PS51ios

Finally, Sanders’ plan calls for building an inclusive and diverse legal cannabis industry that creates and sustains well-paying jobs, while sending financial support to communities that were disproportionately targeted for cannabis arrests under prohibition.

We must end the “war on drugs,” which has destroyed lives and disproportionately impacted people of color.

“As we move toward the legalization of marijuana, I don’t want large corporations profiting,” Sanders told Showtime talk show hosts Desus & Mero. “I want the people who’ve been hurt the most to be able to benefit.”

His plan: Shut out tobacco companies

That focus on bringing economic justice to the cannabis industry includes banning tobacco companies from participating. Sanders would establish a $20 billion dollar grant program to help “entrepreneurs of color who continue to face discrimination in access to capital” and those seeking to “start cooperatives and collective nonprofits as marijuana businesses that will create jobs and economic growth in local communities.”

Add to that another $10 billion through the US Department of Agriculture to help make legal cannabis cultivation accessible to people with prior arrests or convictions for growing the plant.

The plan even looks ahead to establishing national organic standards and certification for cannabis, and making sure all workers in the industry earn a living wage.

But he’s a socialist!

Maybe Bernie Sanders’ cannabis plan sounds like pie in the sky to you. Or Big Government run amok. But whatever your politics, if you love cannabis, you’ve got to show him some respect for waving the legalization flag for so long.

And if you’ve ever been busted for weed, you know he feels your pain. As he explained to Joe Rogan during a recent appearance on his podcast:

When I first talked about the need to legalize marijuana nationally it was considered a very radical idea, and now it’s spreading all over the country. And by the way, it blows my mind to drive past billboards from corporations that say “Buy Our Marijuana” in places where four years ago people were getting arrested for that, and having their lives destroyed.