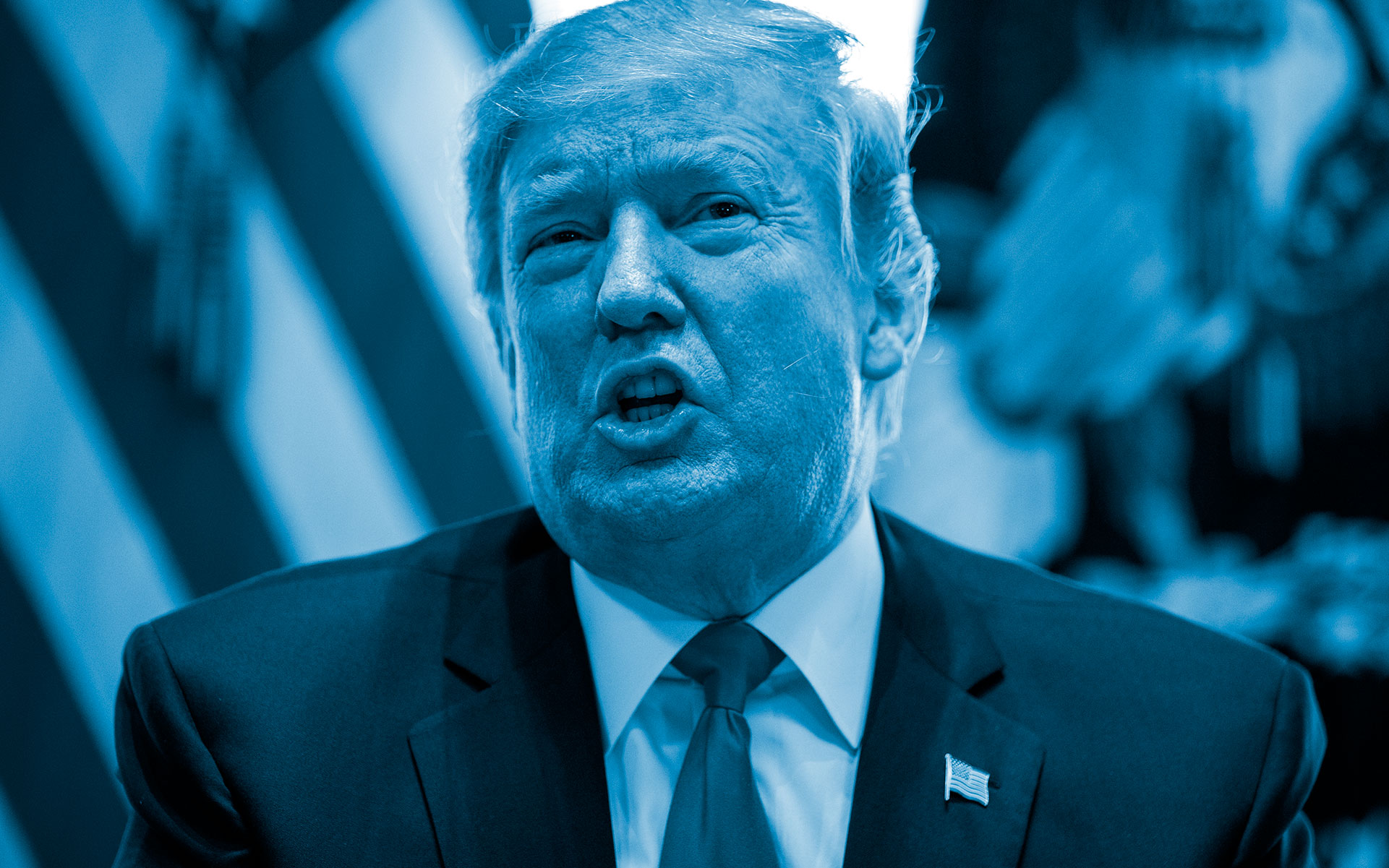 The President stands ready to sign the STATES Act if Congress can pass it this year. (AP Photo/ Evan Vucci)
Legalization has hit a historic tipping point in Congress this year, says Neal Levine, a longtime political operative and head of the Cannabis Trade Federation, which is deploying a record number of lobbyists on Capitol Hill for the issue in 2019.

Levine’s been in the legalization game since 2002, and he said voter support can end prohibition this year through the STATES Act, which exempts legalization states from the 1972 Controlled Substances Act. While it’s cliché to say legalization is “always 10 years away,” Levine says it’s here. In the below Q&A with Leafly, Levine points to some key factors:

“We got an issue here that people are starting to care passionately about that can swing elections,” he tells Leafly.

Strap in. You’re riding with veteran activist and policy wonk turned industry lobbying powerhouse Levine, before his Friday appearance at the International Cannabis Business Conference in San Francisco. The ICBC is sponsored in part by Leafly.

Leafly: I’ll play devil’s advocate. It took 33 states to enact marijuana prohibition before the federal government followed in the ’30s. What makes you think we he have enough states to stop prohibition this year? There’s only nine legalization states.

We have Canada up and roaring. We have Mexico about to set up legal markets. We got countries in South America, Europe, the Middle East, and now Asia all starting to opt out of prohibition. We are ceding what should be an American industry to international competition, and there’s no reason for it, outside of bad policy.

The states are now moving at lighting speed to opt out on their own. We have now reached that point and Congress must act. That’s why we’re focused on the federal level, and that’s why we’re so optimistic we can get this done.

And the reason we’re so optimistic, and we have bipartisan support, and the president said he’d sign [the STATES Act] into law—is because the polling is so over the top in favor. [Federal noninterference] is polling 10 points higher than legalization, and that’s the STATES Act — it’s polling in the mid ’70s, and that’s why I think we can get this done.

Yes, but there are like a half-dozen bills in Congress, why is the STATES Act the one to back?

So Rep. Earl Bluemenaur (D-OR) has a whole suite of bills. … But the STATES Act is a bipartisan bill that the president said he would sign into law if it hits his desk. Based on that, that’s why we’re focused on the STATES Act.

Our intel is that the STATES Act is the one game-changing piece of legislation that we can pass into law in the next Congress.

There’s been a lot of talk about equity lately. That’s not in the STATES Act.

If you look at what’s going on in New York, New Jersey, Massachusetts, California—all the social equity pieces are happening locally. Denver is doing expungement. The state of Colorado is talking about stuff. So a lot of that stuff is happening at the state level, because that’s where the laws are. The STATES Act will speed up the pace of legalization in the states exponentially.

Can the STATES Act help with banking, or tax reform? The current banking situation redlines out anyone who can’t raise a million dollars from an angel investor, friend, or relative.

It immediately fixes [IRS tax penalty] 280E for every licensed legal state business. It doesn’t open up all banking, but it’s going to open up a lot commercial banking services from FDIC-insured banks.

Will Wells Fargo and B of A jump in? Probably not. But will community banks start offering real commercial banking services? Yes.

And it ends the threat of the DOJ coming in and kicking in our doors and seizing our assets for the crime of running a state-legal business.

That being said, what we’re trying to do here is end federal prohibition. The end goal is expungement for everybody with old crimes that would not have violated new law.

But it’s much harder to pass that initial, fundamental, game-changing piece of legislation than it is to amend the law later.

An example is the first law I quarterbacked while I was at Marijuana Policy Project was medical marijuana in Vermont in 2004. Vermont became the ninth MMJ state in 2004. That initial law was three plants, one mature, no industry, grow your own, three qualifying conditions: cancer, AIDS and MS. Vermont then became the first state legislature to end adult-use prohibition, and it was also, ironically, the ninth state to [end prohibition].

So you don’t always get the whole loaf at first.

How do Leafly readers make the most impact with their time and energy here? A lot of people feel powerless, or that this might be above their head.

And then folks can jump on our website, cannabistradefederation.com, and sign up for our list. We’ll be sending updates on ways they can help and be involved, and not just us. Sign up with our partners, the MPP, Drug Policy Alliance, any number of these groups we work in coalition with. They will get a steady stream of things that [they] can do to help us pass this.

What exactly is the six-month-old Cannabis Trade Federation? Your 20-member board includes Pax, Cannacraft, Dixie, Reef Dispensaries, and Tilt?

The Cannabis Trade Federation has the largest-staffed lobbying team the industry has ever seen. If you would have looked at all the other resources that are brought to the table up to this point combined—it’s not as large as what we’re bringing. This is a huge boulder we’re pushing up a steep hill in a short amount of time. We think it’s doable, but we have no illusions about how difficult this is going to be.

Right now we have about 50 companies, and every company has made a minimum financial commitment of a five-figure amount, and board members have made six-figure commitments.

What makes you the guy to lead this macro-group of lobbying groups?

I got into this from a social justice and social equity point of view 15, 16 years ago. So I’ve been here a minute.

When I started working on this issue, there was no real industry. You had California and what was going on there, but all the early medical marijuana laws were grown-your-own laws. The first one we did at the ballot was Arizona that was actually creating industry.

On top of the seven laws I helped to quarterback for MPP, there’s another half-dozen that I played assist role on.

You went into the industry in 2009 in Colorado and ran communications, government affairs and philanthropy for LiveWell. What brought you back into the fray?

How this all started was the prohibitionists went and tried to put a constitutional amendment on the ballot here in Colorado that would have capped THC in products at 16%, which would have made 86% of everything on the shelf illegal overnight.

We formed a coalition to beat that back. Up until that point, the industry just slit each other’s throats, as opposed to work together. And there was a lot of skepticism … whether or not we could work together.

It worked really well. We were able to do a public education campaign and prevent them from gathering enough signatures to get it on the ballot. Sometimes the best way to win a fight is to avoid it. So that worked. We quickly raised a half-million dollars, we knocked it off the ballot, and we refunded half the money, and everyone was like, “That worked splendidly.”

But then at that point, the prohibitionists had qualified a local ballot initiative down in Pueblo County which would have banned the industry, including 1,200 jobs, and scholarship money, and a bunch of stuff. So the coalition expanded and helped defeat that on Election Day down in Pueblo.

But you didn’t stop there?

Now it’s Election Day 2016 and the Republicans have taken over the entire federal government. I went to DC, and what became very apparent to us is we needed some sort of entity from the industry or movement to be able to talk to the right in their language. Because they were talking about tax reform and we saw an opportunity for 280E.

And then obviously we had Sessions as the AG and we saw a great threat. We knew we needed to engage, and we needed to engage in a way where we were talking to the folks who were in power. So that was the formation of the New Federalism Fund, and this Colorado coalition expanded and became more of a national coalition.

We didn’t get a 280E fix into tax reform, then Sessions pulled the Cole memo, Sen. Gardner put a hold on all DOJ appointments, and that turned in to the STATES Act for the release of these DOJ appointments.

And here we are saying, “We need something that’s both sides of the aisle.” And a lot of our folks didn’t feel well served by their options and were talking about pulling together an actual association, and so that led to the natural evolution of what the Cannabis Trade Federation is.

And instead of forming an association, we’re forming a [tax-exempt] federation so we can share some of these resources that we are bringing and spread it around to all of the other entities, so all boats can hopefully rise.

So the Cannabis Trade Federation is much larger than any individual entity. It’s right in our logo what our DNA is about: professionalize, unify, diversify.