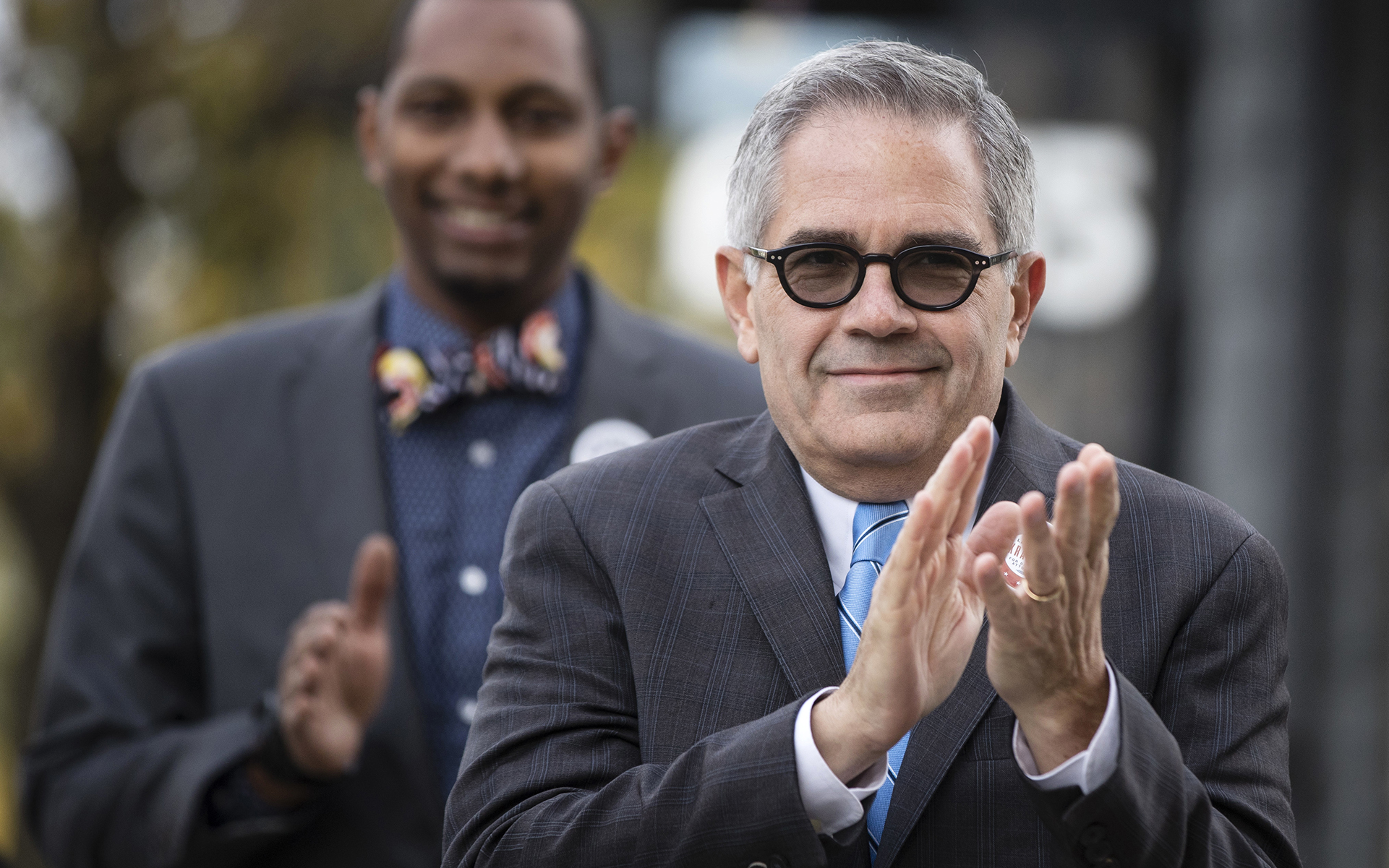 The city's decrim policy reduced arrests by 90%. But it didn't end the racial disparities in those arrests.

Krasner told reporters Thursday that his office tossed the cases earlier this week after noticing a spike in marijuana arrests. Krasner says he felt it was the right thing to do and that his office could use those resources to prosecute murder cases.

Most people who are caught in the city with small amounts of marijuana receive citations but Krasner says that some are still being charged with misdemeanors. He says he’ll drop those cases and won’t prosecute people for having small amounts of cannabis.

“We are going to tell them, yes, drop any cases that are simply marijuana possession,” Krasner said at a press conference on Thursday, according to Brian X. McCrone of NBC10 Philadelphia
.

Four years ago, Philadelphia’s mayor gave the city’s police officers the option to issue citations instead of making arrests for cannabis possession. Krasner said 90% of cannabis possession incidents are now dismissed with a simple fine. But one in 10 people stopped for cannabis were still being arrested, charged, and prosecuted. That will now end.

“What we’re talking about is the 10% or so that are being charged as they used to be, as misdemeanors in court,” Krasner said.

Those 10-percenters were overwhelmingly people of color. The racial disparity in cannabis arrests was highlighted last year by Chris Goldstein of Philly420
. As has happened in a number of cities around the nation, Philadelphia’s decriminalized down-ratcheting reduced the number of arrests by almost 90%, but the racial disparities in those arrests persisted.

Keep in mind that Philadelphia’s population is about 37% white and 43% black. Here’s the chart Goldstein posted on Philly.com: 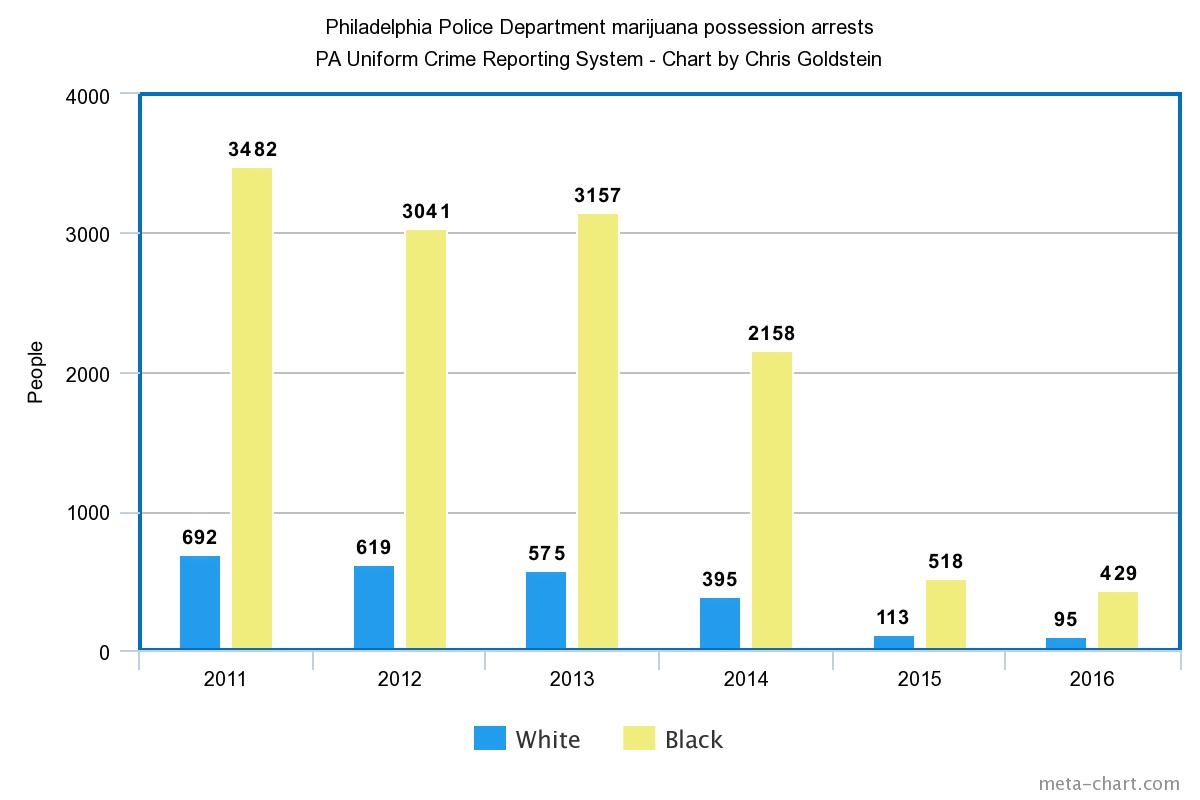 Goldstein pointed out earlier today
that the Philadelphia situation does not extend to the rest of Pennsylvania, where more than 27,000 people were arrested for cannabis in 2017:

Outside of Philly, the police and prosecutors of Pennsylvania are turning a little bit of green into a lifetime of problems for a big group of young adults. There were 27,133 arrests for cannabis last year, and fewer than 20 percent were for the more serious charges of growing and selling.

The commonwealth saw 20,392 adults and 2,269 juveniles charged during 2017 for low-level marijuana possession, according to the Pa. Uniform Crime Reporting System (UCRS).

That means  police were arresting 55 adults every day, simply for the act of having cannabis in the Keystone State. The number nearly equals all other drug possession arrests, combined.

This week’s policy announcement does not prevent the police from still arresting someone for cannabis possession, but if that happens, Krasner’s office will now dismiss the case.

“I did it because I felt it was the right thing to do,” Krasner said. “We could use those resources to solve homicides.”

Krasner worked for years in Philadelphia as a civil rights attorney known for suing the police department. He took office in January.

His move follows a growing nationwide trend of big-city district attorneys ending the longstanding practice of prosecuting residents for small amounts of cannabis, in states where adult-use cannabis is not yet legal. Last year the top prosecutors in Brooklyn and Houston enacted similar policies.

Meanwhile, in cities where cannabis is already legal for adults, officials are moving to vacate past cannabis convictions. Seattle Mayor Jenny Durkan announced
last week that the city will move to vacate an estimated 500 past criminal convictions for cannabis possession. Durkan called the effort “a necessary first step of righting the wrongs of the past.”

Colorado’s governor, meanwhile, is considering whether to grant clemency to roughly 40 people serving time for cannabis offenses. And San Francisco County District Attorney George Gascon recently vowed
to toss out or reduce thousands of criminal convictions for cannabis dating back to the 1970s.