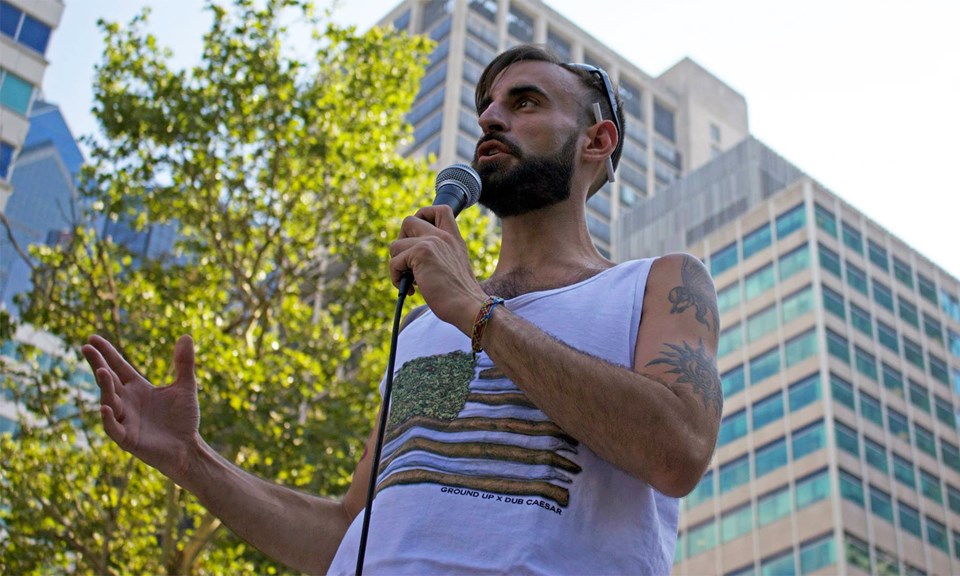 N.A. Poe — Philadelphia iconoclast, comedian, media artist, and cannabis activist — has been everywhere in Philadelphia during this week’s Democratic National Convention. On Monday his hands hoisted one of the 51-foot joints that paraded through downtown. When Westboro Baptist Church members showed up to harass LGBT Democrats, Poe and fellow activist Rachel Friedmann mounted a counter-demonstration that featured a brilliant “GOD HATES SCHWAG” sign. And when the Cannabis Pride March starts moving through Philly on Thursday, Poe will be among those leading the parade.

Poe, an activist well known around Philadelphia City Hall and the state capital of Harrisburg, has aggressively, theatrically, and hilariously pursued drug reform for the past couple years. (“N.A. Poe” is the name of his comedy stage persona, which he sometimes elaborates into “Nikki Allen Poe.” He asked us not to use his real name, but it’s out there if you really want to look.) In 2014, he played a role in Philadelphia’s successful fight to decriminalize cannabis after waging his own less-than-successful campaign for City Council. His “Smoke Down Philly” YouTube series has featured Poe lighting up in front of Geno’s Steaks, at Citizens Bank Park, and at Independence Hall. 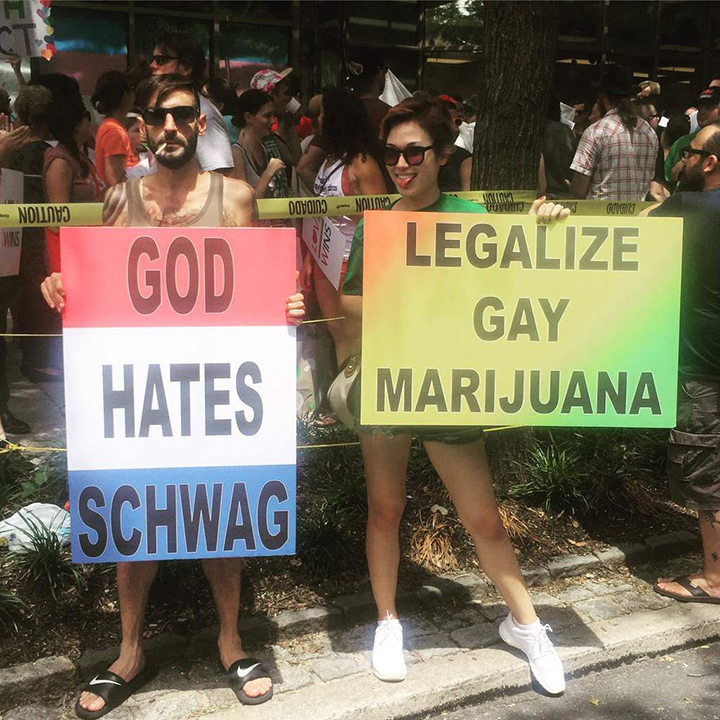 Leafly: How is Philadelphia’s cannabis community seizing its moment in the spotlight?

N.A. Poe: With the Democratic National Convention here, we have a four-day opportunity to make national news and put Philly and our movement on the map. I love my city. I want it to be safe. And I want the opportunity to create as many national media moments for the cannabis movement and for Philadelphia as we possibly can. We're really digging in for these four days, doing multiple events, going out in 100-degree heat and humidity, driving this debate, creating video and social media moments. It's our time. We’ll have August to relax.

We have a great relationship with [Philadelphia’s pro-cannabis] Mayor Jim Kenney. We're actually getting social media assists from the police! With all these cameras and national attention, the cannabis community stepped up and showed Philly's leadership on drug reform.

You're a straight guy who frequently cites the gay rights movement as inspiration. Do you, a long time Philly cannabis advocate, feel kinship with the LGBT community?

I'd like to mirror the LGBT community. No other moment has achieved so much politically, socially, and culturally in such a short time. It's astonishing. The road to freedom is normalization and being a part of your community — being open about it, coming out of the closet. Gay activists taught me that changing hearts and minds is just as important as changing laws. The LGBT community's model for social justice and acceptance is definitely one I admire and try to emulate.

We can't have drug reform without having the police involved. How's that playing out in Philly?

I pitched a cannabis tent at OccupyPhilly about five years ago. Those were contentious times with the police. But over the last few years we've created a relationship with Philadelphia Police Department brass so they understand who we are, what cannabis reformers want, and where we're coming from. That's created a relationship with us and the PPD that allows us to flourish. I want to thank the PPD because they tweeted a picture of our 51-foot joint which got hundreds of retweets! Amazing! Three years ago they were arresting thousands of people every year for pot. Now they’re they're posing for pictures with us and tweeting it. I want to do whatever I can to normalize our culture and protect cannabis consumers. If that means having coffee with the cops every few weeks, I'm happy to do it."

The police in Philadelphia have been amazing this week, a world class police force in a world class city. They're prepared for this. They deal with protests all the time here. Look, if you want to interact with the police in a negative way and be arrested, you can be. But they're not looking for trouble.

And of course, it hasn't always been that way…

It's funny, five years ago I would have been like, "It’s a police state around here with all these cops!" But look, the Democratic National Convention is in Philadelphia at a time when ten police officers have been killed in the last two weeks. For them to respond in Philly the way that they have, all I’ve seen is PPD facilitating people's First Amendment rights. That's their job, and so far so good.

Event Note: Tomorrow’s DNC Marijuana Pride Parade is scheduled to kick off at 3 p.m at the corner of Broad and Oregon, in downtown Philadelphia.