Putin, hackers, and cannabis: The bizarre story of an Israeli-American jailed in Russia 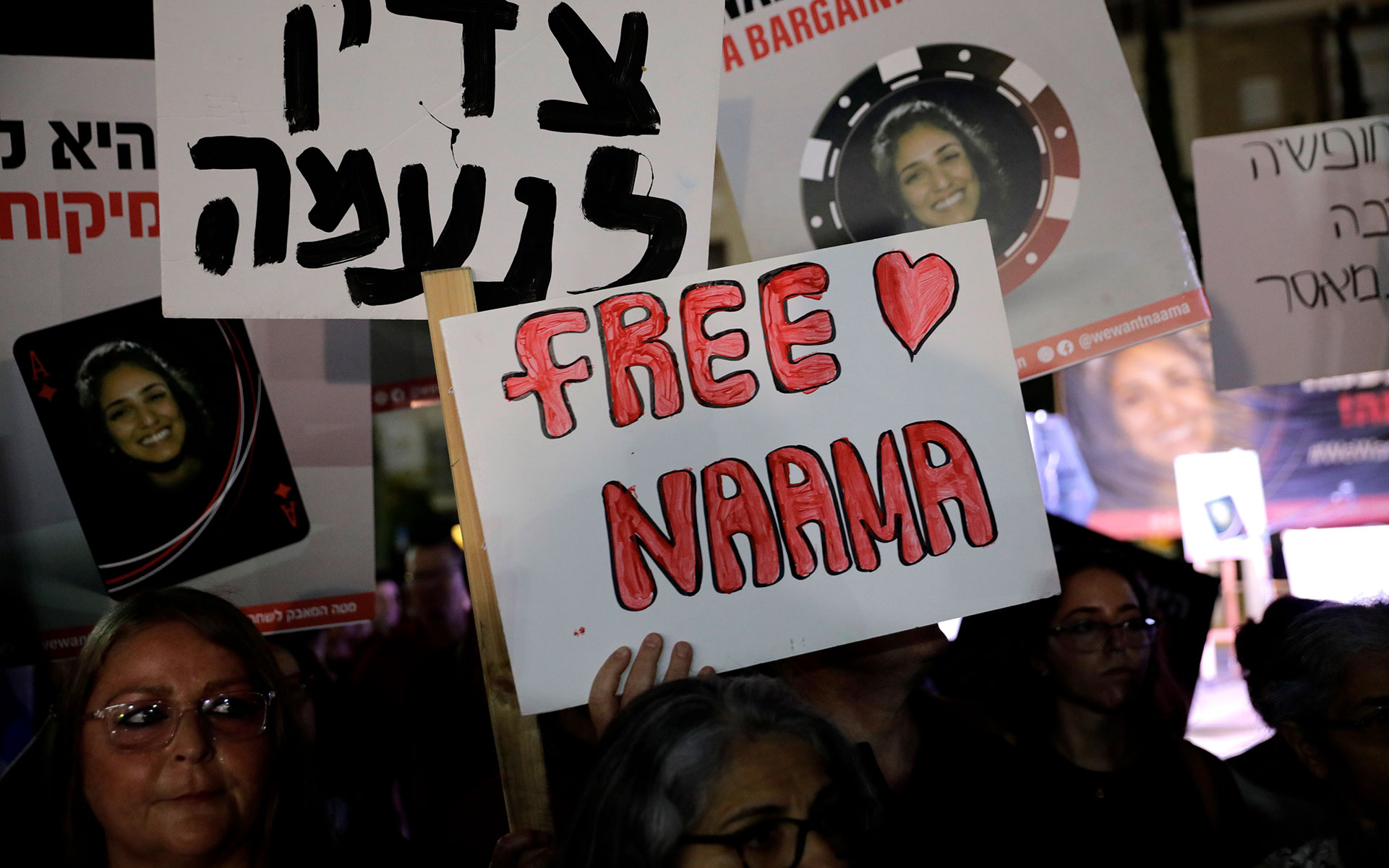 Israeli Prime Minister Benjamin Netanyahu this week asked Russian President Vladimir Putin to release a 26-year-old dual Israeli–US citizen who’s currently serving a seven-and-a-half-year prison term in Russia for possessing a small amount of cannabis. Netanyahu’s direct plea is the latest twist in a bizarre, monthslong international saga that has triggered rallies and boycotts in Israel—and also involves a Russian hacker scheduled to be extradited to the United States.

Cannabis, initially given as the sole reason for her detention, now appears to have been merely a convenient excuse.

Naama Issachar emigrated from New Jersey at 16 to Israel, where she earned citizenship and served in the Israeli Defense Forces. In April, she was on her way back to her home in Tel Aviv from an extended trip to India. Her flight on Aeroflot, Russia’s flag carrier, connected via Moscow, where Russian authorities searched her checked luggage, found nine grams of cannabis, and detained her.

“We could never imagine my sister would become a geopolitical pawn. It’s so crazy, you almost can’t make it up.”
Liad Gold, Issachar's sister

Israel is one of the world’s leaders in cannabis research and entrepreneurship. Attitudes in that country resemble those in some American states, where the plant is viewed as either a medicine or an intoxicant no more taboo than alcohol. The nine grams of cannabis allegedly in Issachar’s possession was well under Israel’s 15-gram limit for personal possession and home use.

Russia takes a very different approach. Cannabis possession is a crime in that country, and violators are dealt with harshly. Possession can carry a penalty of up to a year behind bars; trafficking cannabis can earn a decade-long prison term.

Issachar’s family as well as her defense attorney assumed that after paying a fine, she’d be set free. But very soon, something seemed off about how Russian authorities chose to handle Issachar’s case.

Instead of possession, Issachar was charged with trafficking. And rather than receiving a swift trial, Issachar was shuffled from prison to prison for almost six months.“We suspected it was about something else” besides cannabis, said Liad Gold, Issachar’s sister, in an interview with Leafly News, “but had no idea what, and couldn’t imagine in our wildest nightmare that it would be this.”

Young Israeli-American has been held in a Russian prison for 193 days on a marijuana charge.

Thousands of Israelis came out tonight in Tel Aviv to demand for her return to #Israel chanting: Free Na’ama! pic.twitter.com/ew4r7SBXfc

As her trial was repeatedly delayed, her family worked every available diplomatic channel to win her release. National security experts contacted by Leafly in August and September, when Issachar’s family took the matter public in the Jerusalem Post, initially doubted that Issachar’s case was connected to anything else.

“Cannabis is simply illegal in Russia,” said an American source who had lived in Russia for an extended period of time and is familiar with how the Russian government works. The source spoke with Leafly anonymously in order to avoid attracting attention. “Passenger bags are routinely searched, and if that’s your bag, well, this is going to be a bad day.”

Another American, a 19-year-old college student, was busted at the Saint Petersburg airport with almost twice as much cannabis—and was sent home after paying a $230 fine.

Others echoed the assessment. “I am not sure it has a geopolitical angle. We know how the Russian justice system works,” Efrain Inbar, president of the Jerusalem Institute for Strategy and Security, told Leafly in an Aug. 28 email. “Israel-Russians are very good and neither side has an interest to rock the boat.”

At the time, Inbar said, the case had barely made a ripple in Israeli media, aside from a few stories in the Post.

But then another American, a 19-year-old college student, was busted at the Saint Petersburg airport with almost twice as much cannabis—and was sent home after paying a $230 fine. For her family, it was a clear sign that Issachar was being singled out for special treatment.

The reason why became clear earlier this month, when Issachar’s case became front-page news in every paper in Israel, where she is now a cause célèbre.

As Issachar’s detention stretched from weeks to months, her mother, Yaffa, semi-relocated to Russia in order to be closer to her daughter. Around that time, according to Gold, she and several other members of the family started to receive unsolicited Facebook messages from individuals in Russia.

“They were trying to reach us for months. They told us, ‘One cannot be released without the other.’ But we brushed it off.”
Liad Gold

They identified themselves as family of Aleksey Burkov, a Russian national and IT specialist held in Israel and wanted on embezzlement charges in the United States. Let’s work together, the messages urged. We’re in this together.

“They were trying to reach us for months,” Gold told Leafly, “They told us, ‘One cannot be released without the other.’ But we brushed it off. We ignored it.”

Then on the eve of Issachar’s sentencing on Oct. 11, Israeli diplomats received a telephone call from their Russian colleagues, according to Israeli media reports. The Russians reportedly offered the same deal: Release Burkov and Issachar would go free.

FBI: Cannabis arrests on the rise for 3rd year running

The request was denied. Israel’s Supreme Court instead approved Burkov’s extradition to the United States.

The following day—after court hearings held on the high Jewish holy days of Rosh Hashanah and Yom Kippur—Issachar was sentenced to seven-and-a-half years in prison. The following Sunday, Israeli media ran the first story surmising that Issachar was being held in an attempt to spring Burkov.

“That was when the lightbulb went off: This really is political,” Gold said. “We knew it was something more, but we could never imagine my sister would become a geopolitical pawn. It’s so crazy, you almost can’t make it up.”

The case has since drawn the attention of Netanyahu, Israel’s prime minister who is potentially on his way out but who has traditionally enjoyed close ties with both Putin and US President Donald Trump.

Netanyahu has personally implored Putin to release Issachar from prison. And as The Times of Israel reported, with Issachar’s family’s pleas to Jared Kushner, a Jewish American, Trump’s son-in-law, and tasked by the White House with Middle Eastern relations, evidently failing, Netanyahu also personally appealed to Mike Pompeo, the US Secretary of State, to take action.

It’s not clear what Pompeo said in response, nor how seriously American authorities are taking the case. The State Department has not responded to multiple requests for comment from Leafly, nor have US-based Israeli and Russian embassies and consuls returned phone calls American authorities have also yet to reach out to Issachar’s family, according to Gold.

“The Americans know what’s going on,” she said. “I don’t know for certain [what’s happening], but we haven’t heard anything.”

Of course, Trump’s apparently close relationship with Putin, an autocratic strongman who viciously quashes dissent and is believed to have enriched himself to the tune of several billion dollars through corruption, has been the subject of much speculation in the United States.

Recent reports in Israeli media have suggested that Burkov is in some way connected to Russian intelligence services, which may explain why Russian would be so keen to have him released—and be willing to take an Israeli citizen “hostage” as a bargaining chip.

Burkov has denied any such ties, however, and Israeli media have so far not provided any evidence to support the claim.

The case is “is a new and troubling step in Moscow’s growing abuse of the judiciary for political ends.”
Natan Sharansky, former political prisoner in USSR

“The predator state has always existed, but it’s now free of the previously substantial constraints, where you had to be careful about embarrassing the powers that be,” the source said. “The powers that be don’t give a shit anymore. The constraints on predatory actors across the bureaucracy have been loosened.”

Netanyahu issued a formal request to Russia to release Issachar shortly after her sentencing. On Monday, when Putin phoned Netanyahu to wish the Israeli leader a happy 70th birthday, Netanyahu steered the conversation to Issachar. The pair discussed the case “in one way or another,” top Putin aide Yuri Ushakov told Reuters.

The case has also begun to draw attention in the United States, where the Washington Post has run two items covering Issachar’s plight.

In an opinion piece published Oct. 16, Natan Sharansky, a former political prisoner in the Soviet Union, argued that the Issachar case “is a new and troubling step in Moscow’s growing abuse of the judiciary for political ends” and another sign that under Putin, Russia has returned to Soviet-style authoritarianism.

“This is hardly the first time that Russian officials have used the court system to carry out extortion,” she wrote. “Yet this is the first time, to my knowledge, that a complete outsider — not a Russian citizen, not a resident, not even a tourist who entered Russia — has been caught up in Moscow’s machinations.”

Israeli citizens have since launched a boycott of Russian airline carriers, such as Aeroflot, which have proven popular methods of conveyance due to their relatively low fares.

Gold, Issachar’s sister, is calling on the US government to help address the matter—so far to no effect.

“We would really like the American government to get just as involved as Israel,” Gold said. “At the end of the day, she’s an American citizen who’s being wrongfully held in a foreign country.”