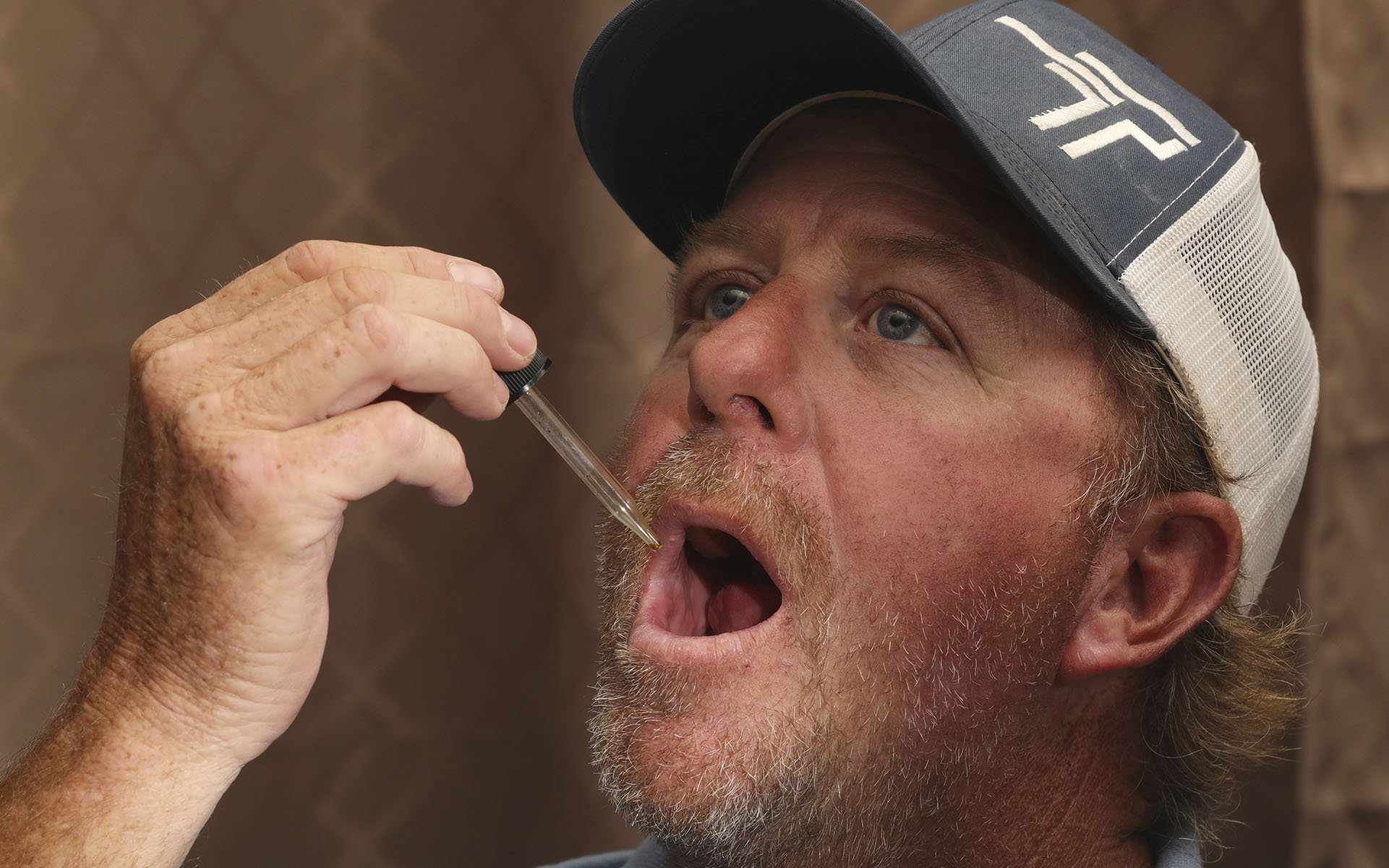 Mitch Hill, 48, holds a tincture dropper to his mouth at his home Thursday, Oct. 24, 2019, in West Jordan, Utah. A law passed by the Utah Legislature in Dec. 2018, allows residents to use medical marijuana before patient cards are officially doled out, which is expected to happen in March 2020 at the earliest, but they must obtain a signed letter of recommendation from a doctor physician's assistant or other medical provider. (Rick Bowmer/AP)

SALT LAKE CITY (AP) — As Utah prepares to launch its medical marijuana program next year, residents who want to use the drug in the meantime are encountering skeptical doctors and the quandary of where to get the plant.

“Our family doctor didn't even want to talk about it, they wanted nothing to do with it.”
Mitch Hill, Utah cannabis patient

A law passed by the Utah Legislature in December 2018 allows residents to use medical marijuana before patient cards are officially doled out, which is expected to happen in March 2020 at the earliest, but they must obtain a signed letter of recommendation from a doctor, physician’s assistant or other medical provider.

Finding a doctor willing to do that has been difficult because of stigmas and fear surrounding medical marijuana, said Christine Stenquist, the director and founder of advocacy group Together for Responsible Use and Cannabis Education, or TRUCE.

And, the doctor’s letter doesn’t specify how patients can legally obtain medical marijuana. Although growers are beginning to cultivate the plant throughout the state, residents still can’t legally purchase medical marijuana in Utah, forcing them to drive several hours to states where the drug is legal or turn to the black market.

“Our family doctor didn’t even want to talk about it, they wanted nothing to do with it,” said Hill, a construction superintendent from the Salt Lake City suburb of West Jordan.

Hill drives five hours to the nearest dispensary in Colorado a few times a month to purchase medical marijuana.

Juggling work, children and his throbbing back, the trip is “a massive pain in the butt,” he said.

He turned to marijuana because he said opioids and other painkillers turned him into a “walking zombie,” feeling groggy, fatigued and nauseous. Medical marijuana helps his pain dissipate and relax, Hill said. He’s able to be more productive in his job and take care of his children.

“We wanted to try and give patients access to the medication as soon as possible.”
Evan Vickers, Senate Republican Majority Leader

“The letter has been a great thing for our family,” Hill said.

State health officials aren’t tracking how many people have doctor’s letters allowing them to use medical marijuana, but it appears there are thousands at least based on information from major medical providers and advocates.

The letters are a “stop-gap measure” before the state’s official medical marijuana program is launched, Evan Vickers, the Senate Republican Majority Leader, said.

“We wanted to try and give patients access to the medication as soon as possible,” he added.

He said the formal program will make it much easier for people to get and use medical marijuana, eliminating trips to neighboring states and long searches for willing doctors.

Patients must meet a list of qualifying conditions—cancer, chronic pain and epilepsy are among the most common—and have the product in the correct dosage. Under the current law, this would likely be an oil or capsule. Next year, patients must still follow the dosage requirements but can appeal to a board of medical providers if they don’t meet one of the qualifying conditions.

Utah is one of at least nine states that allowed recommendation letters to protect unregistered patients, according to data from the Marijuana Policy Project, a Washington-based group that advocates for legalization.

“It helps sick people get relief, but it can create a false sense of security,” he said. “Moving a controlled substance across state lines is still against federal law, and then it’s up to the patients to defend themselves in court.”

Marijuana is banned at the federal level, though a congressional amendment blocks the Justice Department from interfering with states’ medical marijuana programs.

Patients are putting themselves at potential risk of being arrested for drug-related crimes, advocates said, but it is unclear if law enforcement agencies are citing patients who have letters.

Salt Lake County District Attorney Sim Gill, the prosecutor in Utah’s most populated county, said he sees the letter as a critical legal tool in deciding whether to press charges in drug-related crimes.

“I have zero desire to prosecute a patient in need for possessing medical cannabis, and I’ve advised prosecutors the same,” Gill said.

Among Utah’s doctors, the letters have received strong, mixed reactions.

Intermountain Healthcare, the state’s largest health provider, began allowing its doctors to write letters in February. While some doctors applauded the move, others said they aren’t comfortable writing the letters, citing lack of research into medical cannabis and its federally illegal status, said Mark Briesacher, the hospital’s chief physician executive.

Stenquist expressed frustration with the challenges Utah’s medical cannabis program has faced but said she’s hopeful for a smooth rollout next year.

“Patients don’t want to break the law, they’re just trying to get access to medication,’ she said.