On Tuesday, President Donald Trump and First Lady Melania Trump announced they would sit down with Health and Human Services Secretary Tom Price for a “major briefing on the Opioid [sic] crisis.” The meeting, held at the president’s private golf course in Bedminster, NJ, came in the wake of a report issued that morning from the National Center for Health Statistics showing that US drug overdose deaths continue to skyrocket.

The opioid problem is real—and growing. The federal government’s report found that overdose fatalities climbed to a record 19.9 per 100,000 people in the third quarter of 2016. More recent data aren’t yet available, but the New York Times projected in June that the number of overdose deaths in 2016 would surpass 60,000—making for the sharpest annual increase ever recorded. Overdose deaths now kill more people per year than guns, car crashes, or HIV ever have. 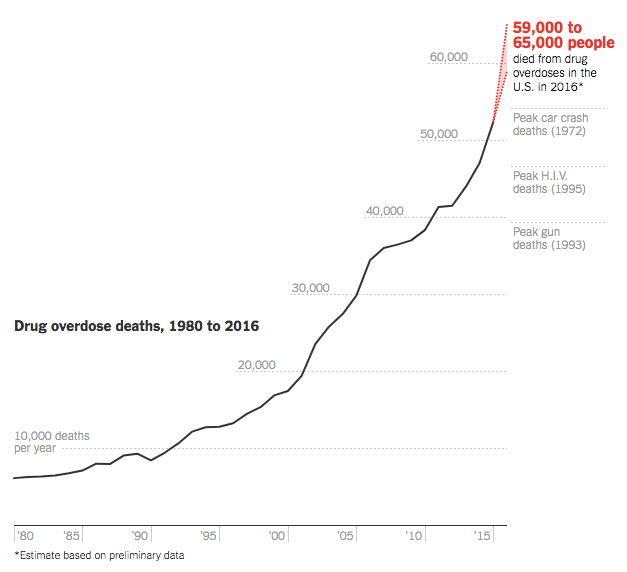 New Jersey Gov. Chris Christie, whom Trump tapped to head his Commission on Combatting Drug Addiction and the Opioid Crisis, noted last month that “142 Americans are dying every day of a drug overdose.” About six in 10 of those are caused by opioids. A Washington Post analysis found that overdose death rates for people between the  ages of 25 and 44 have risen for nearly every racial and ethnic group across almost all US states.

“To say we have a crisis here is an understatement,” Christe said, describing current overdose fatalities as “the equivalent of the death toll on Sept. 11 every three weeks.” The commission urged the White House to address the problem as a public health issue rather than a criminal one.

Trump Commission Calls for ‘State of Emergency’ Over Opioids

Cannabis has been conspicuously absent from the White House’s discussion of the opioid crisis so far. That’s a bit of a surprise in light of its longtime—and disproven—stigma as a “gateway drug” and Jeff Sessions’ apparent thirst to crack down on state-legal medical and adult-use systems. But it’s even more surprising given the growing body of evidence that cannabis could help abate the opioid epidemic.

Preliminary studies show that cannabis can be an effective treatment for chronic pain. The mere legalization of medical marijuana is associated with fewer opioid prescriptions and decreases in both opioid-related hospitalizations and overdoses. Some states have considered adding opioid addiction as a qualifying condition for medical cannabis, although lawmakers have said there’s still not enough evidence to justify it.

Trump’s Chris Christie-led panel could have urged further study on the issue. Instead, the commission was entirely silent on cannabis as a method of combatting opioid deaths, ignoring roughly 7,800 public comments that referenced the plant. Pointing to a study that found that legalizing marijuana correlated with a 23% drop in opioid-related hospitalizations or overdoses, MSNBC correspondent Jacob Soboroff asked a member of the commission, former US Rep. Patrick Kennedy, why that was.

“It doesn’t seem to be a logical or sensible solution,” Kennedy replied, calling legal cannabis “the Big Tobacco of our time” and arguing, “I just don’t think adding more gasoline to the fire by adding a new addictive substance.”

“All things are on the table for the president.”
Tom Price, Health and Human Services Secretary

Following Tuesday’s briefing with President Trump, Health and Human Services Secretary Price  was asked at a press conference whether pharmaceutical companies that manufacture opioids may in fact be the Big Tobacco of our time. “Whether that’s something that’s analogous to that, I don’t know,” he said.

For his part, Trump suggested that opioid addiction could be averted by making sure people don’t start using opioids in the first place. “If they don’t start, they won’t have a problem,” he said. That could be accomplished, added the president, “maybe by talking to youth and telling them ‘no good, really bad for you.'”

Trump on preventing opioid addiction: "Maybe by talking to youth and telling them 'no good, really bad for you.'" https://t.co/vYhELawmK3

Kellyanne Conway, a counselor to the president who angered Massachusetts Sen. Ed Markey by saying that individuals suffering from drug addiction “need a four-letter word called ‘will,’” was also at the press conference. She emphasized that the White House takes the opioid crisis seriously, calling it a “nonpartisan issue in search of bipartisan support and bipartisan solutions.”

Price echoed that sentiment, claiming that officials are leaving no stone unturned. The administration is “identifying every single thing that could move us in a better direction,” he said. “All things are on the table for the president.”

All things, apparently, except one.