Another cannabis study is getting some play in the media this week. This time it’s about cannabis consumers raising their risk of periodontal disease. Or, as those timid bet-hedgers at the Daily Mail put it:

Anyone who works with cannabis science can tell you that it’s worth reading these headlines with your skept-o-meter cranked to 10 because the study itself often doesn’t bear out the screaming takeaway. In some cases, the data actually disprove the scary “news.”

Such is sort of the case with the gum disease study.

The study was published on Wednesday in JAMA Psychiatry, one of the field’s most respected peer-reviewed journals. The researchers, a team from Arizona State University, Duke, and other institutions, scraped statistics from the Dunedin Study, a famous data set that followed 1,037 people born in 1972 and 1973, in the town of Dunedin, New Zealand. The subjects have been tested and re-tested for decades. It’s one of the most-cited longitudinal studies in medical science.

Related
Three Things Everyone Should Know About Cannabis and Exercise

The researchers mined the Dunedin data for adverse health effects among cannabis consumers at age 38. In other words: of those who regularly used cannabis up to age 38, were there any health problems associated with that use?

The answer: not really. All they could find was a slightly higher instance of gum disease. The reason, the researchers guessed, was that cannabis consumers tended to brush and floss less than others.

In fact, the shocker in the study was this: cannabis consumers actually exhibited better overall fitness than non-cannabis users. “Cannabis use was associated with slightly better metabolic health,” the researchers wrote. Cannabis users had smaller waist sizes and lower body mass indexes. To put it in the crudest possible Daily Mail terms:

That’s overstating the case. But it makes as much sense, scientifically, as the “teeth fall out” headline.

“Our findings show that cannabis use over 20 years was unrelated to health problems in early midlife.” I’m quoting directly from the study here. “The general lack of association between persistent cannabis use and poor physical health may be surprising,” the scientists wrote. So surprising, in fact, that they racked their brains to come up with possible reasons. “One explanation is that healthy youth select into cannabis use,” they wrote. “Another explanation is that cannabis users may have healthier adult lifestyles.”

Another explanation might be that cannabis users in this cohort found a way to incorporate cannabis into a healthy lifestyle. They successfully avoided repeating the stoner stereotype—the fat slob, the loser, the burned-out head.

It’s a shame the reporters and editors writing up the results couldn’t do the same. Coverage in health news wire services and medical news sites foregrounded the gum disease angle. JAMA Psychiatry put out a press release headlined, “Long-term Marijuana Use Associated with Periodontal Disease.” The Guardian offered a more balanced headline, but defaulted to a classically stupid photo of a person in purple weed glasses. 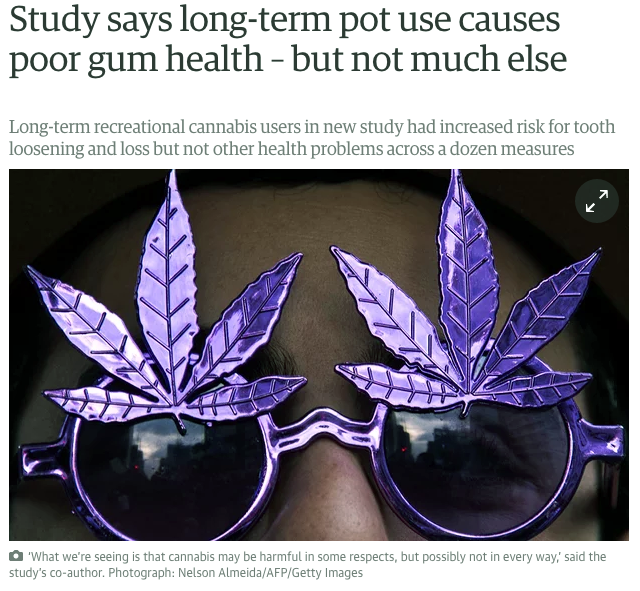 Curiously, one of the few places we saw even-handed coverage of the study was on the Facebook page of the Jacobs Foundation, the nonprofit Swiss organization that partially funded the study, which said, “Long-Term Study Finds No Ill Effects of Cannabis Smoking on Physical Health, Apart From Gum Disease.”

Health
Is the cannabis entourage effect real?
Science & tech
Dabbing gets cleaner and more high tech with DabTabs
Science & tech
How can nanomedicine be applied to cannabis?
Science & tech
Intro to e-rigs and e-nails
Sign up for more Leafly news
Thank you for subscribing!