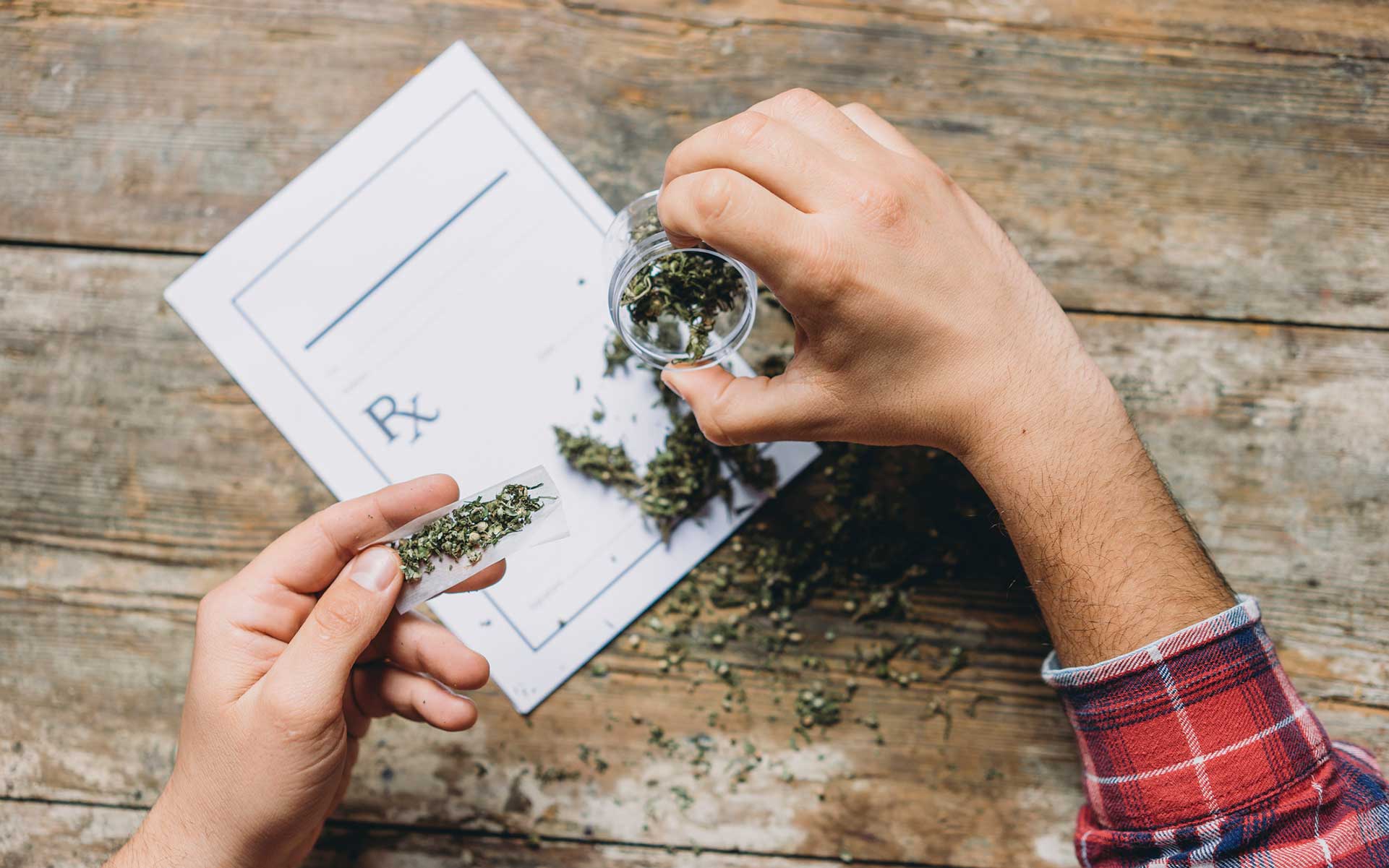 Patients must buy almost $3,000 of cannabis per year to break even on the cost of an ID card, a Leafly analysis finds. (FilippoBacci/iStock)

Virtually none of the estimated hundreds of thousands of California patients entitled to purchase tax-free cannabis are getting those savings—because the state’s medical marijuana ID card system has collapsed, new data from the California Department of Public Health shows.

Patients say it's just too burdensome and costly to get one.

In a state of 40 million people, just 4,551 patients had the official medical marijuana ID card, according to CDPH totals for the fiscal year 2018-2019, which ended June 30.

Adult-use legalization—with its 600 stores and delivery services, plus the legal right to grow at home—has made the card partially obsolete for adults 21 and over. Those seeking the official ID card say that it’s costly and time-consuming to obtain and often not worth the hassle. One of the country’s oldest medical cannabis card programs might need to be retooled or scrapped. 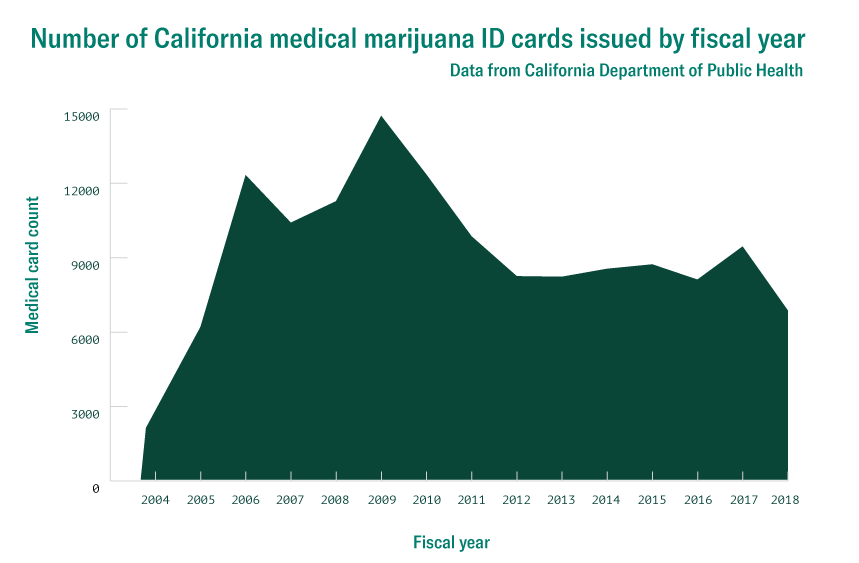 Active state ID card totals are down 65% from their 2010 peak. (Leafly, California Department of Public Health)

“Is the program serving the people it should? No,” said Debby Goldsberry, operator of the Magnolia Wellness dispensary in Oakland, and an ID cardholder. “The cost is too high. People don’t buy that volume of cannabis, and there’s no value to them.”

The world’s first medical marijuana law, California’s Proposition 215, passed in 1996. But it didn’t actually legalize medical marijuana. It offered an awkward medical defense in court for those with a doctor’s note.

Patients say, ‘Why should I have to register with the county like some sex offender?’

By 2004, cops had grown tired of trying to verify more and more doctor’s recommendations during police stops. So the California Legislature passed Senate Bill 420, which created an ID card system and gave cops a state number to call to verify patients. Cardholders couldn’t be stopped solely for possessing a permissible amount of cannabis.

“It does offer a little more protection” than Prop. 215 offered on its own, said Ellen Komp, co-director of California NORML.

But the card system never really caught on. Patients didn’t have to get the card—it’s voluntary for those who want extra legitimacy. By contrast, later medical cannabis states mandated ID cards. “Because it was voluntary,” Komp said, “it was set up for failure.”

Also, there’s the privacy issue. Telling the state that you use a federally illegal Schedule 1 controlled substance turns off a lot of people, said Komp. “Patients say, ‘Why should I have to register with the county like some sex offender?’”

The state’s 2016 adult-use measure, Proposition 64, granted state medical ID cardholders an exemption from state and local sales taxes, which run 7.25% to 10.25%. Other medicines aren’t taxed, either.

Medical ID cardholders can also obtain their medicine in other states that have so-called “reciprocity” rights.

Holding a card can ease interactions with law enforcement. Medical marijuana patients can possess more than the state’s adult-use limit of one ounce in public, and six plants on your property.

California did $1.91 billion in cannabis sales in its first adult-use year, 2018, yet almost no one took the medical sales tax break. Why?

Getting a card is a part-time job

Here’s what a patient will tell you: First you have to find a doctor who will write you a note, and there are fewer of them now under adult-use legalization. Make an appointment. Go to the doctor’s office and pay about $150 for the consultation, maybe more.

Then find out how to make an appointment with your county health department, and schedule that weeks in advance, schlep to some county health office, bring the right paperwork, and pay up to $100. The county has 30 days to verify the application, then 30 days for the state to make the card, then you might have to come back to the county health office to pick up the card.

Yay! Now you can save an average of 8.37% sales taxes on your cannabis purchases. So go out there and purchase at least $2,986 worth of cannabis products, at which point you’ve saved enough in sales taxes to have paid for the doctor’s visit and card ($250).

“It costs an enormous amount of money to get a card,” said Goldsberry.

Oh, also: After one year, the card expires and you have to repeat the entire process.

In San Francisco, the birthplace of cannabis compassion, waits are two weeks to get a county health appointment. You have to show up in person, even if it requires an ambulance to bring you, Aldrich said.

Aldrich learned that the hard way earlier this year when her husband, Michael, went to renew the card of a bed-ridden woman for whom he has been a caregiver for the past six years. The woman, in her 60s, has intractable and debilitating chronic pain from hip and knee injuries. San Francisco County Health wants her down at the health office to renew her ID card, said Aldrich. Unlike last year, a picture of the patient, or a consult via teleconference, won’t do.

What is the total addressable market of people in California who qualify for medical cannabis?

Instead, no one knows. The California Department of Public Health told Leafly it has no quotas for program success. Neither do the counties.

“There is no target goal for issuing a number of [cards],” a staff member at the Los Angeles County Department of Public Health told Leafly in an emailed statement. LA County has issued 138 medical marijuana ID cards so far this fiscal year, for a population of 10.1 million people.

'There is no target goal for issuing a number of cards.'
Los Angeles County Dept. of Public Health Communications Department

“It is likely that the numbers of MMICs issued have decreased as other options are now available for legal purchase,” the LAPDH staff member wrote.

LA County, which encompasses 4,751 square miles, has seven Public Health offices where patients can set up appointments. The county does not keep data on wait times for an appointment, but “the program is not aware of long waits for the applicants to get an appointment with our department.”

LA County, Tulare County, and Kings County each have recorded one death and dozens of illnesses caused by vaping illicit market THC vaporizer cartridges. Victims report shopping in the black market because they cannot afford the high cost of tested products.

Tulare County Public Health Division Manager Cecilia Herrera told Leafly the county’s medical ID card system is a success because it follows applicable state laws. Getting a card can take up to six weeks and $100 in fees, plus the doctor’s visit cost. Tulare has issued a total of four ID cards this fiscal year.

“The decrease in numbers of MMJ ID Cardholders is likely due to recent changes in legalization. … The Tulare County decrease is consistent with the state trend,” Herrera said.

Kings County Assistant Director of Public Health Nancy Gerking also considers her county’s program a success. Getting a card there can take as little as about two weeks, and two visits to the county health office. The rural county has four active medical marijuana cards, for 151,000 people. “We are proud to say we believe our program at Kings County to be successful,” Gerking said. “That’s largely due to the fact our turnaround time is very short.”

Kings County is down from a 2015 peak of eight cards. Gerking couldn’t say why, though she had a theory: “Since the legalization of recreational marijuana the cards may have become less desirable.”

Should we shut it down?

Given how few people get ID cards and how much it probably costs taxpayers, should we just shut the program down and give the sales tax break to anyone with a doctor’s note? It’s tough to say.

“I wouldn’t have a problem with that,” said NORML’s Ellen Komp.

“It doesn’t have that much utility,” said LA. lawyer Alison Margolin. “And I support medical marijuana.”

The biggest loss would be to medical cannabis travelers. “I need my reciprocity,” said Oakland patient Debby Goldsberry.

Instead, Goldsberry recommended lowering county application fees to $20 or $30, plus a statewide educational campaign about the advantages of the ID card.

Many former medical patients shop in adult-use stores. That adds up to a likely overpayment in the tens of millions of tax dollars statewide. “I’m still seeing patients” at Magnolia Wellness, said Goldsberry. “They just don’t get their card anymore. They don’t understand the value.”

Ultimately, medical cannabis preceded adult-use legalization, and that paradigm is too valuable to lose, she said.

“Cannabis can be used as a targeted medicine to help a wide variety of conditions,” Goldsberry said, “and we’ve just started looking at the tip of the iceberg in terms of what the plant can do and how it can help people. This is not the time to take the market away from helping people have these transformative experiences. We need to bring the focus back to cannabis as a plant that helps people.”