The world’s most expensive gram of cannabis can be yours for $32.66 on the illicit market in Tokyo.

Want something legal and cheaper? Head to Quito, Ecuador, where the same weight of plant matter can be had for $1.34—and you can possess up to 10 grams without running afoul of the law.

Those are the highs and lows according to a 2018 cannabis price index released Wednesday morning by Seedo, the German company that manufactures small-scale hydroponic grow devices.

One lesson seems fairly obvious from the data: Regulated legalization generally drives prices down for the consumer, but not always and everywhere. The least expensive cities tend to be in partially legal nations (Ecuador, Colombia, Paraguay, Uruguay), and the most expensive cities are all illegal—except Oslo, although they (or rather, Norway) just decriminalized last month. 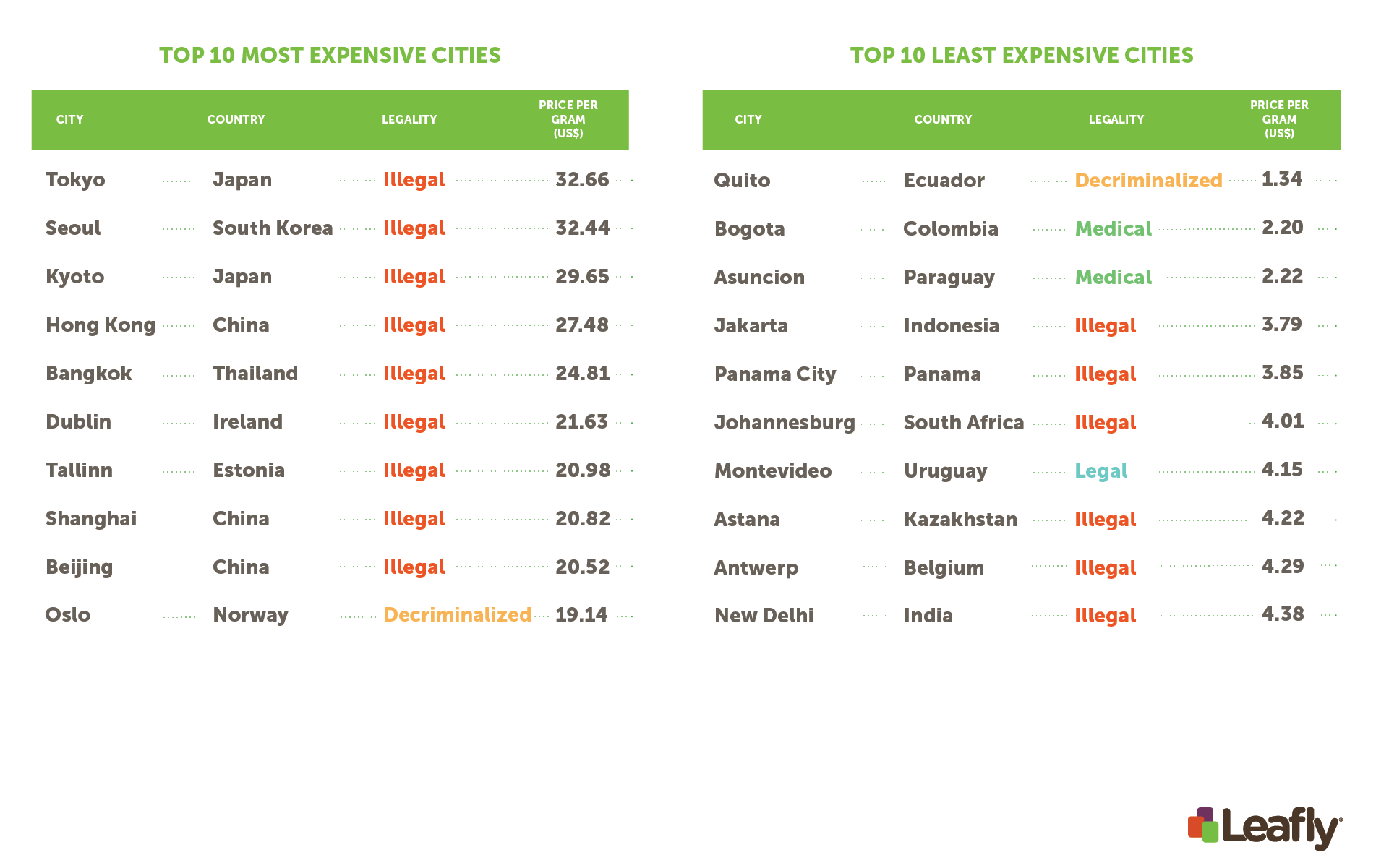 Highest/lowest prices in the US

Sorry, Washington, DC. You voted for adult-use legality years ago, but Congress won’t let you implement any regulatory process that would allow legal farming and sales. You can possess cannabis legally, but it’s really hard to obtain it. And it’s expensive: $18 a gram!

Meanwhile, the power of a legal regulated market has proven to be a boon to consumers in Denver and Seattle, where a gram goes for less than $8. (Although we know some stores that sell it for $6.) 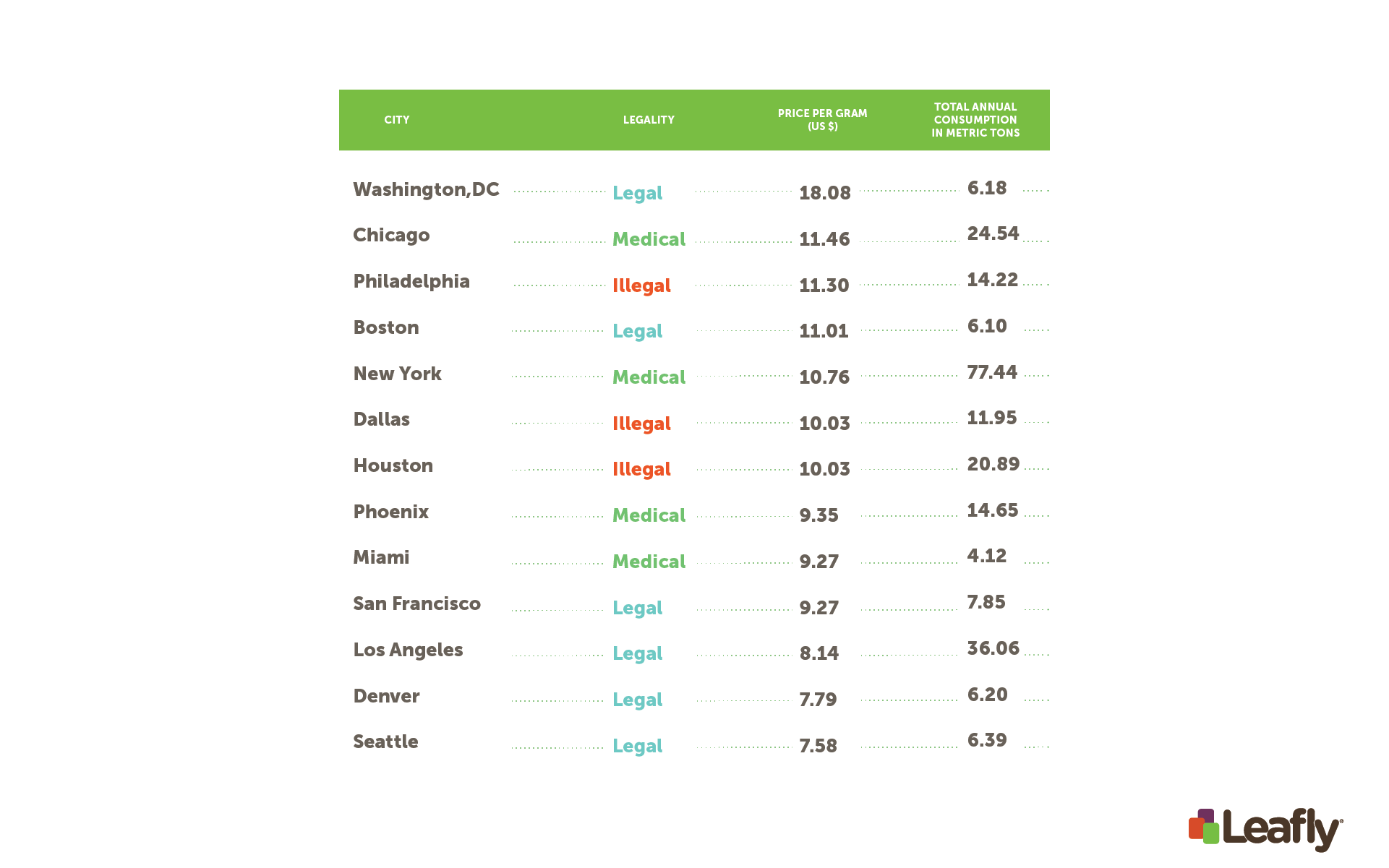 Real talk: Who smokes the most?

No contest. New York City, you are the king. Seedo’s data team estimated the Big Apple’s consumption rate at 77.44 metric tons per year, nearly twice the intake of the second city, Karachi.

Meanwhile, in Singapore, where cannabis is extremely illegal, the entire city consumes only about 44 pounds of the stuff per year. And, frankly, we’re a bit surprised to find only 0.44 metric tons of consumption in Reykjavik, a very hip and happening town. Then again, the city only has 123,000 people. Still, New York’s per-capita consumption works out to about one-third of an ounce per person. The residents of Iceland’s capital consume a little less than half that. 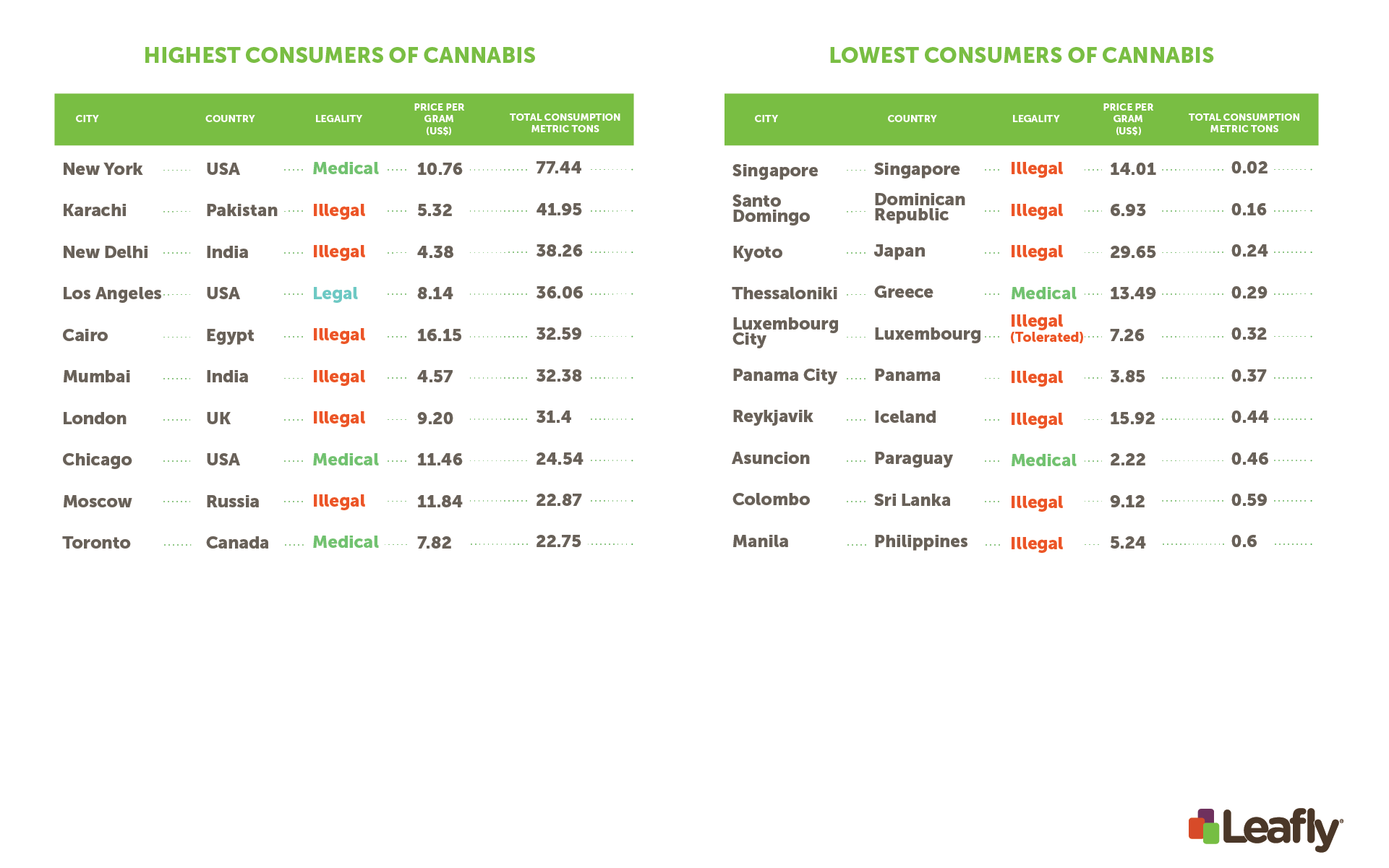 Seedo’s engineers have developed personal indoor growing machines that allow home gardeners to grow cannabis at home, “avoiding pesticides and taking ownership of their personal supply,” says Uri Zeevi, Seedo’s chief marketing officer. “We believe that by understanding the cost of weed around the world, we can help to educate smokers about the potential financial benefits of hydroponic growing technology.”

Zeevi noted that “illegal cannabis use is so high in countries that still carry the death penalty, such as Pakistan and Egypt. Those in power ought to see how desperately new legislation is needed. By removing the criminal element from marijuana, governments will then be able to more safely regulate production, take away power from underground gangs, and generate huge tax revenues.”

More findings from the survey: