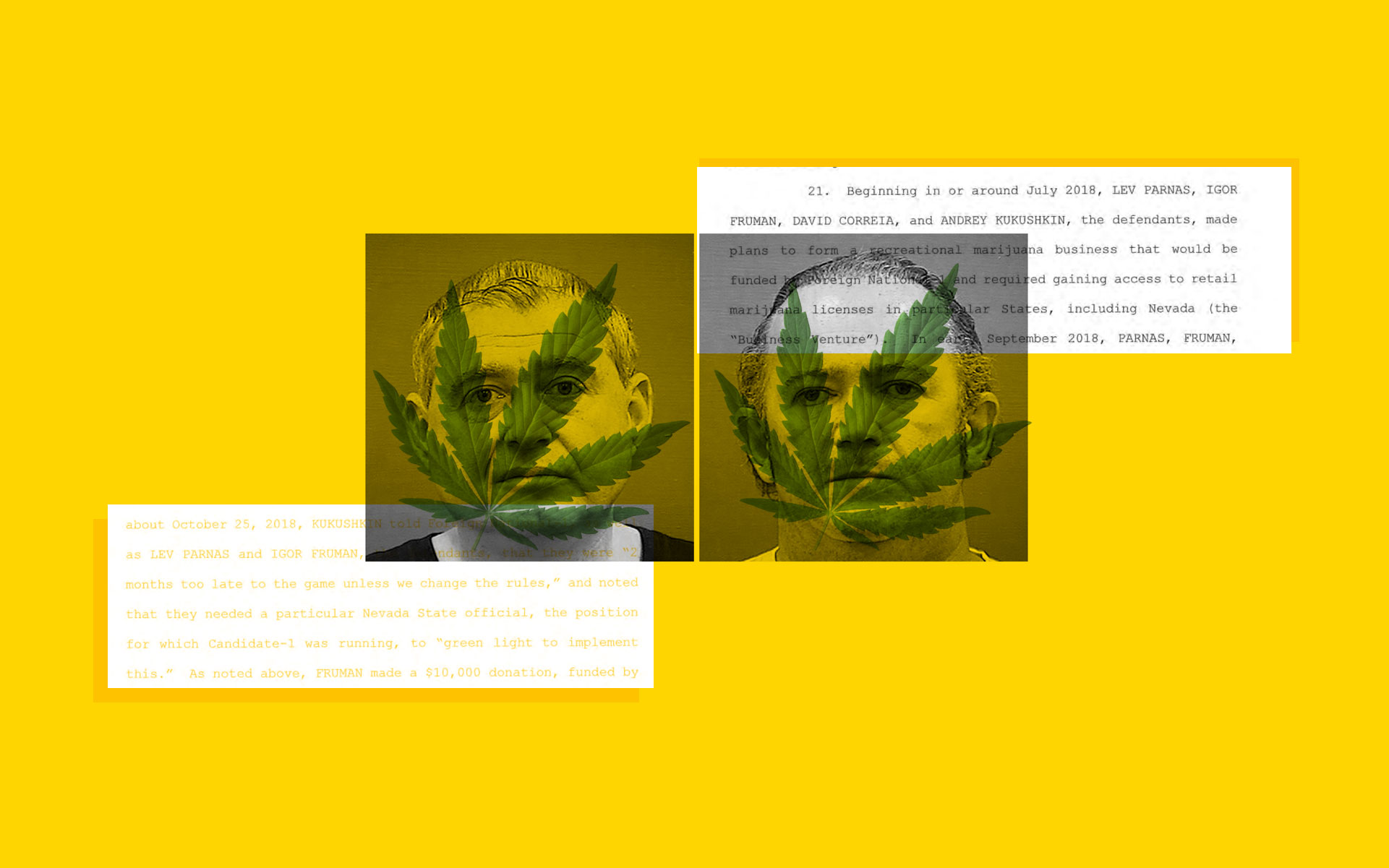 Lev Parnas, left, and Igor Fruman, right, associates of Rudy Giuliani, were arrested on a four-count indictment. The men had key roles in Giuliani's efforts to launch a Ukrainian corruption investigation against Biden and his son, Hunter. (Alexandria Sheriff's Office via AP) / (nikamata/iStock) / U.S. District Court indictment document
America’s ongoing drama over the impeachment of President Donald Trump took on a cannabis slant this week.

The US Attorney for the Southern District of New York unsealed a criminal indictment Thursday charging four US citizens with using foreign money to influence domestic elections.

In one charge, the group tried to help get a Congressman reelected so he would help fire the ambassador to Ukraine.

In another charge, the group worked on behalf of a foreign national to try and elect two Nevada candidates in order to gain favor in obtaining adult-use cannabis licenses.

During a televised press conference on Oct. 10, US Attorney Geoffrey Berman said one US native, David Correia, and three Soviet-born US citizens, Lev Parnas, Igor Fruman, and Andrey Kukushkin, “Broke the law to gain political influence and avoid disclosure as to where the money was coming from.”

In Alexandria, Virginia, Sheriff’s deputies arrested Parnas and Fruman on Oct. 9 at the airport with one-way tickets out of the country. Kukushkin turned himself in today, and Correia was not in custody at the time of the press conference. John Dowd, an attorney for two of the men, did not respond to requests for comment from major news outlets Thursday.

Job #1: Get the Ukraine ambassador fired

The US Attorney alleges the defendants conspired to break the Election Act—which makes it a crime for foreign nationals to influence US elections.

On behalf of third parties in Ukraine, they donated money to a Congressman running for reelection, with the goal of getting the US ambassador to Ukraine fired.

The indictment details how the men created a shell company in March 2018—Global Energy Producers—to launder and funnel cash: First, $325,000, and then tens of thousands of dollars more from third parties in Ukraine to “Congressman-1,” thought to be Sen. Pete Sessions, who has since resigned.

The donations came with requests to fire the US ambassador to Ukraine, the indictment states. The indictment also states that “Congressman-1” did not know the origin of the dirty donations he received.

Posted by U.S. Attorney's Office for the Southern District of New York on Thursday, October 10, 2019

The indictment also states that Parnas, Fruman, Correia, and Kukushkin took $1 million from a “Foreign National-1” and “Made plans to form a recreational marijuana business that would be funded by ‘Foreign National-1’ and required gaining access to retail marijuana licenses in particular states, including Nevada.”

This money was transferred to a bank account controlled by Fruman on Sept. 18, 2018, “To cover all the donations whatsoever,” Kukushkin—who was born in Soviet-era Ukraine—later wrote.

Fruman then donated $20,000 to “Candidate-1” and $10,000 to “Candidate-2”—which according to donor records is thought to be Republicans Adam Paul Laxalt and Wesley Karl Duncan, respectively—with the goal of obtaining cannabis licenses.

Two months too late to the game unless we change the rules.
Andrey Kukushkin, Ukraine-born US citizen, in a Justice Department indictment

The defendants had missed the window for applying to a cannabis license in Nevada and sought to influence the candidate who would be making licensing decisions.

Kukushkin told “Foreign National-1” and the trio that they were “Two months too late to the game unless we change the rules,” and that they needed Laxalt to win the seat he was running for “To green light and implement this.”

The defendants also had ambitions to obtain licenses in New York and “other states,” however, “The business venture did not come to fruition,” the indictment alleges.

Arbitrary license limits and opaque selection processes for adult-use cannabis licenses creates major incentives to bribe public officials. When regulations call for de facto oligopolies, each license becomes a golden ticket to print money. The legal and illegal US industry has an estimated value of $52 billion, according to RAND.

We’ve seen in some states the price go as high as $500,000 for a license to sell marijuana.
Regino Chavez, FBI Supervisory Special Agent

“We’ve seen in some states the price go as high as $500,000 for a license to sell marijuana,” FBI Supervisory Special Agent Regino Chavez said in a podcast.

In recent years, numerous state and local officials across the US have had to resign or have gotten indicted by the FBI for taking bribes to pick cannabis industry winners.

According to The Wall Street Journal and The Washington Post, both Parnas, born in Soviet-era Ukraine, and Fruman, born in Soviet-era Belarus, helped former New York City Mayor Rudy Giuliani dig up dirt on Vice President Joe Biden in Ukraine. Fox News published a picture of Parnas and Fruman with Donald Trump Jr. The WSJ published a photo of Parnas with Giuliani taken at Trump Hotel Wednesday.

According to the Wall Street Journal, “Since late 2018, Mr. Fruman and Mr. Parnas have introduced Mr. Giuliani to several current and former senior Ukrainian prosecutors to discuss the Biden case, acting as key conduits of information.

“The two had lunch with Mr. Giuliani at the Trump International Hotel in Washington on Wednesday, according to a person who was in the hotel and saw the three together,” according to the article.

Charges add pressure on the President

More broadly, this is a bad look for the White House: The President’s lawyer, Giuliani, and son, Don Jr., are seen sitting with what appear to be Ukrainian bagmen.

“The indictment, packed with allegations of political donations being made in secret for the benefit of foreign interests, only adds to the growing legal and political pressure on President Trump and his attorney as they try to fend off Democrats’ efforts to impeach him over his efforts to spur a Ukraine investigation of Biden,” The Washington Post reports.

“The American people expect and deserve an election process that has not been corrupted by foreign influence,” said US Attorney Berman.