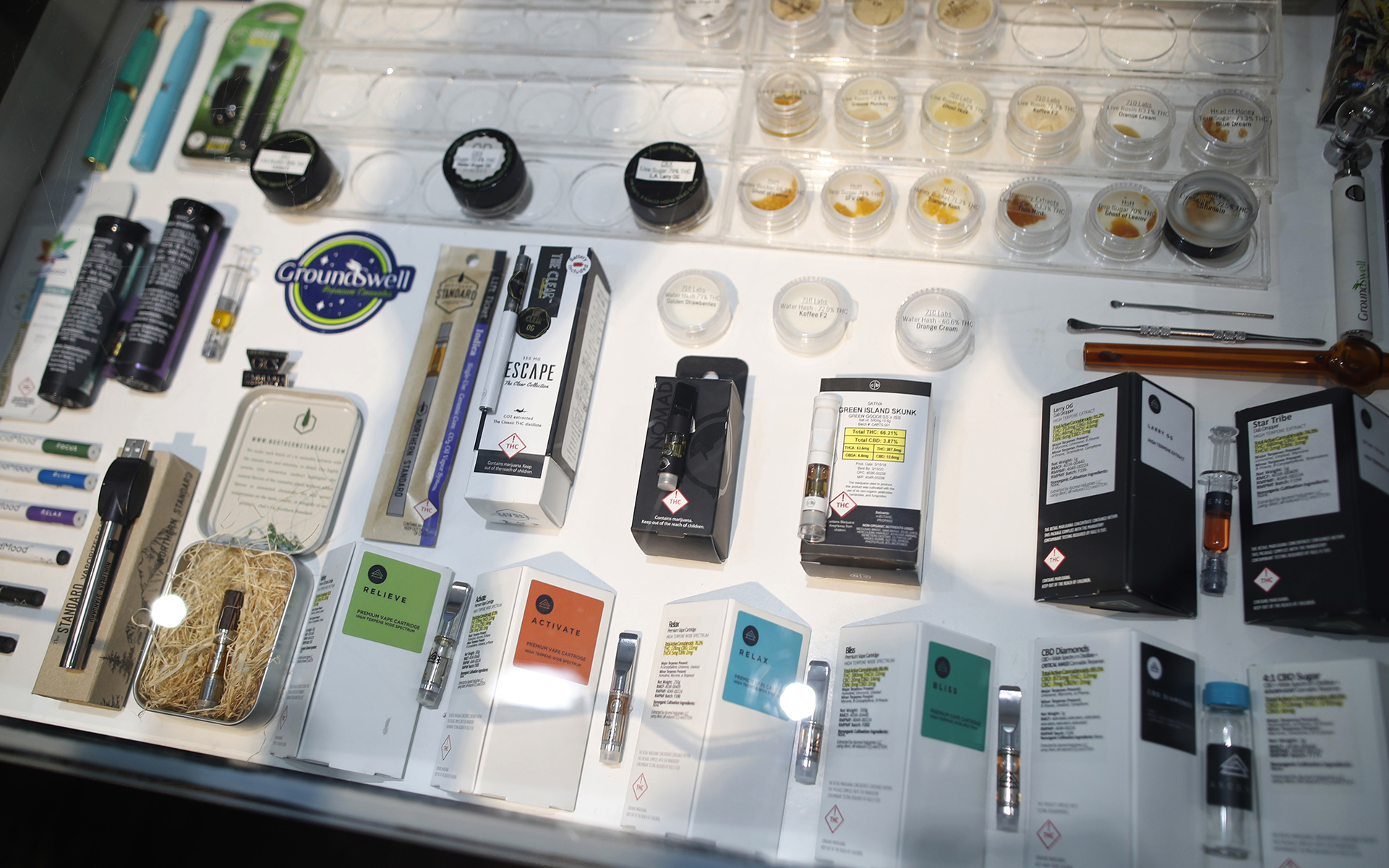 Michigan medical cannabis patients are still waiting for their products and dispensaries to be licensed by the state. This product selection, above, comes from Ground Swell, a licensed dispensary in Denver, CO. (David Zalubowski/AP)
As Michigan residents prepare to vote on adult-use cannabis legalization this November, the state’s 220,000 medical marijuana patients are still wondering when the state will start licensing their MMJ dispensaries.

There are 540 cannabis license applicants. Only 19 are currently being processed, and 8 of those have already been rejected.

Medical marijuana was legalized in Michigan in 2008, but state officials didn’t address regulations and licensing until 2016, when Michigan legislators passed the Medical Marihuana Facilities Licensing Act.

The state Medical Marihuana Licensing Board, a unit of the Department of Licensing and Regulatory Affairs (LARA), began accepting facilities applications in Dec. 2017. According to the 2016 law, cannabis facilities had to make “a good-faith effort to become licensed” by Feb. 15, 2018, or face closure.

Roughly 70 facilities applied for licenses in Dec. 2017. By Feb. 15, that number had grown to more than 540 applications. Here’s the problem: By July 4, the Licensing Board had yet to issue a single license.

Around the state, 96 municipalities have “opted in” to allow marijuana facilities to operate. But they’re still waiting on the state board to issue licenses.

Of the 19 applications currently being processed, eight have already been denied. Failure to disclose information and/or demonstrate good moral character have been the two primary reasons for denying applications so far.

Because of its own lack of progress, LARA had to extend the deadline for facilities to have licenses to operate from June 15th to September 15th.

Even as dispensaries await their licenses, members of the Medical Marihuana Licensing Board have been cancelling meetings due to scheduling conflicts. The board let its long-scheduled June 11 meeting go by the wayside because, as LARA spokesperson David Harns told WZZM-13, one board member said they couldn’t make the meeting and another said they would have a difficult time making it there in time.

The Licensing Board’s next monthly meeting is scheduled this Thurs., July 12, in Lansing. (See below for more information. The meeting is open to the public.) There’s no guarantee any licenses will be issued at that meeting, either. 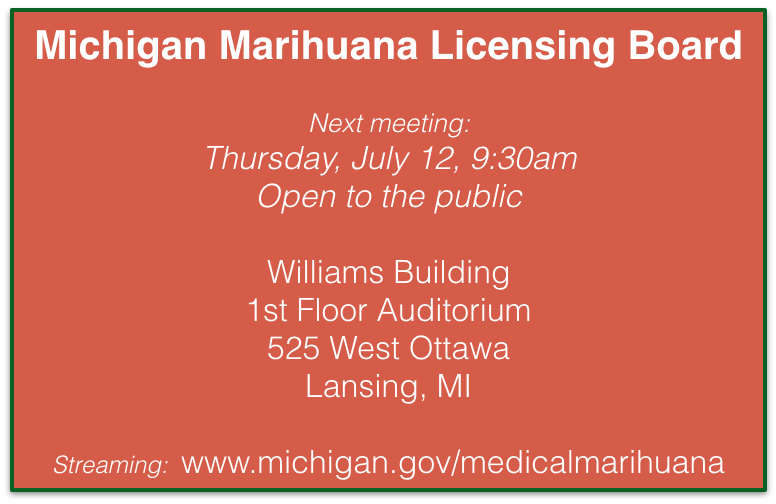 As to exactly what the holdup is, at least one southern Michigan dispensary owner has his suspicions.

“It’s a complete prejudice and discriminatory nature the state has taken against cannabis,” said the owner, who declined to be named out of fear the Licensing Board would reject his dispensary’s application if he made his comments public.

“Every step in the process, you are asked questions that are discriminatory,” he said. “This licensing process is unlike any other licensing process in this country,” he observed, citing the intrusive and highly personal forensic audit applicants must undergo. In addition to fingerprint collection, this includes bank statements and explanations for every transaction over $1,000, of both the applicant and their spouse, going back three years.

“It’s got nothing to do with business; this is all personal info you have to give, for every person who’s involved,” adding that marijuana facilities typically require joint ownership, due to the financial demands of starting a company in an industry where no conventional bank loans or credit lines are available.

Looking for Cannabis in Michigan?

Let Leafly's Dispensary Finder Do the Work for You

“This has been frustrating for everyone,” Michigan cannabis business attorney Denise Pollicella told Leafly.

In addition to a complex, lengthy, and entirely new application system, there seems to be a disconnect between Michigan’s Department of Licensing and Regulatory Affairs (LARA), under which the 2016 Medical Marihuana Facilities Licensing Act (MMFLA) operates, and the MMLB, which is responsible for awarding licenses.

“The rules aren’t clear, and the direction isn’t clear, between the Board and LARA, and there’s some disconnect between the two about what they find as relevant,” said another facilities applicant whose applications for multiple provisioning centers and locally approved facilities are pending.

“It’s my understanding that LARA has made recommendations for approval to the board for certain applicants,” the applicant told Leafly, “and the board is still making determinations to deny licenses to these applicants for non-disqualifying circumstances.”

“It really puts the applicants in a bad position,” he added.

Michigan’s licensing system may be among the most rigorous medical cannabis vetting process in the nation.

“The state and LARA and the [Medical Marijuana Licensing] bureau are regulating the industry more like casino gaming,” said Policella, “which is a far more strict process” than other industries.

From anecdotal sources, Policella said she was told that the Medical Marihuana Facilities Licensing Act and its 2017 amendments were based on a combination of other states’ medical regulatory systems and Michigan’s casino industry regulations.

“Why our state would need to investigate individual bank statements, and tax returns, and generally try to do the job of the forensic accountant is beyond me—especially when I’m positive there are no forensic accountants there [on the Licensing Board],” Pollicella said.

The fact that medical cannabis has been a cash industry—and continues to be, due to onerous banking regulations—makes auditing financial transactions above $1,000 even more nuanced.

“This industry is begging to be regulated, and now it’s jumping through hoops. We’re supposed to be helping people sell tested, regulated marijuana…You have an entire industry full of people willing to do the right thing,” Policella said. “The more applications they reject, the more people are going to go back to the black market.

Why Drag People Through the Mud?

“It’s unfortunate that we’re confronted with the situation of having to drag people through the mud,” Licensing Board member David LaMontaine said during a board meeting in April, according to the Detroit Free Press. La Montaine was referring to Raymond Oatman, who had applied for a cultivation license. “He served his time, he beat his drug addiction and it looks like he’s got a successful plumbing business going. But he failed to disclose not just one, but two things.”

“It isn’t so much that he had this old conviction, it’s the fact that he left it off his application,” said board member Donald Bailey, a retired Michigan State Police officer, in regard to another denial, this one based on a non-drug-related misdemeanor that the applicant failed to disclose. Bailey also had problems with an applicant’s financial transactions.

'The board members are playing judge, jury, and executioner up there,' said one applicant. And there are no patients or people with cannabis industry knowledge on the board.

“This was a business that was making millions a year ago and sold to the applicant for $59,000. I’m a police officer and that doesn’t make any sense to me,” Bailey said.

These decisions seem subjective and arbitrary to some applicants.

“The board members are playing judge, jury, and executioner up there, outside the law,” one applicant told Leafly, citing board members who have expressed opinions about applicants who have received financial compensation as caregivers under the existing medical marijuana law.

As to why the Governor and his appointees have taken Michigan’s marijuana regulation this direction, Policella observes:

“The goal seems to be to ferret out illegal drug dealers. They’re looking for evidence of applicants who may have a history of illegal drug sales, and they seem to be using financial due diligence investigations to extrapolate criminal drug behavior out of what they’re seeing. I absolutely don’t agree that this is legal or constitutional.”

The Medical Marihuana Licensing Board includes two retired police officers, two pharmacists, and a lobbyist. According to the state’s website, three out of five board members represent Republicans, and two represent “independents.” None of the members represent patients, caregivers, or doctors.

Similarly, LARA’s Marihuana Advisory Panel is devoid of patient representation. Local police, sheriffs, counties, townships, physicians, and cities and villages are represented by the five members, but the position to represent marijuana patients and caregivers remains listed as vacant.

There Are Dozens of Dispensaries in Michigan

Let Leafly Find the Ones Near You