A Canadian curling league is set to embrace legalization this winter as it hosts what could be the country’s first-ever Bongspiel.

Hosted by the Wiarton & District Curling Club in the Ontario town best known for its prognosticating groundhog, the 420-friendly curling event will take place on Jan. 26.

Bongspiel co-convenor Ted Ratcliffe tells Leafly it’s an idea he and his friend Grant Nicholson had been mulling over for more than a year before finally deciding to do something about it.

“And really, the whole point is to raise money for our aging curling club,” Ratcliffe said.

The club, which opened in the ’60s, was a little shocked by the proposal at first, but while there were initial concerns about a potential conflict with their liquor license and the liability associated with people falling on the ice, they ultimately came on board. A bonspiel is, after all, a social curling tradition akin to a beer league.

The idea has been a hit. The event sold out almost instantly.

“There’s a real appeal with it. It’s very Canadian, the idea of combining curling and cannabis,” Nicholson said in an interview with The Wiarton Echo.

Related
5 cannabis strains for getting cozy on cold days

The event will see 16 four-person teams compete in an all-day tournament complete with continental breakfast, lunch, and banquet dinner (probably lasagna), live band, DJ, and, of course, smoke breaks—outdoors and off club property, in accordance with provincial laws.

Ratcliffe said the idea is already spreading. He’s recently fielded inquiries from neighbouring clubs interested in copying the idea or even adopting his logo as a way to attract new members. 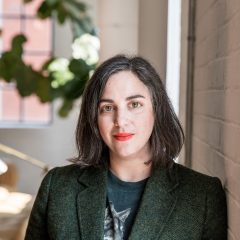