Josh Kaplan March 29, 2018
Share
Share on Twitter   Share on Facebook
Print
Pain is the number one reason people seek medical care—and quite possibly medical cannabis—and it affects more people than diabetes, heart disease, and cancer combined. In the clinic, pain is often treated with opioid drugs like OxyContin, Percocet, Vicodin, and Fentanyl. This has traditionally been a first-line treatment approach because they work—at first.

On their own, low doses of cannabis or opioids do not relieve pain, but in combination, they do.

But opioid use has spiraled out of control and we find ourselves amidst an opioid epidemic that cost the U.S. $504 billion in 2015 alone, claims the lives of over 30,000 annually, and damages the quality of life of countless others. Clearly, we must do something to curb the growing opioid epidemic, but unfortunately, it appears that the federal government is ignoring one of its strongest solutions: cannabis.

We know that cannabis is effective in treating chronic pain. We understand its ability to effectively substitute for opioid medication, and that CBD can combat opioid abuse by reducing its rewarding effects. Here, we’ll take a look at how cannabis enhances the effects of opioids—an interaction worth exploring in an era plagued by opioid dependence and overdose.

CB1 Receptors Are Important for the Effects of Opioids

The original natural painkiller, opium, dates back to 3,400 B.C. in Southwestern Asia. Cannabis followed a half a century later. It’s unclear if they were ever used together to treat pain, but consumers would have found profound pain relief from low doses of both drugs when used together.

Science is revealing that the cannabinoid and opioid systems can work synergistically to achieve greater pain relief. This interaction becomes clear when you consume super low-doses of THC or opioids; on their own, these low doses do not relieve pain, but in combination, they do. 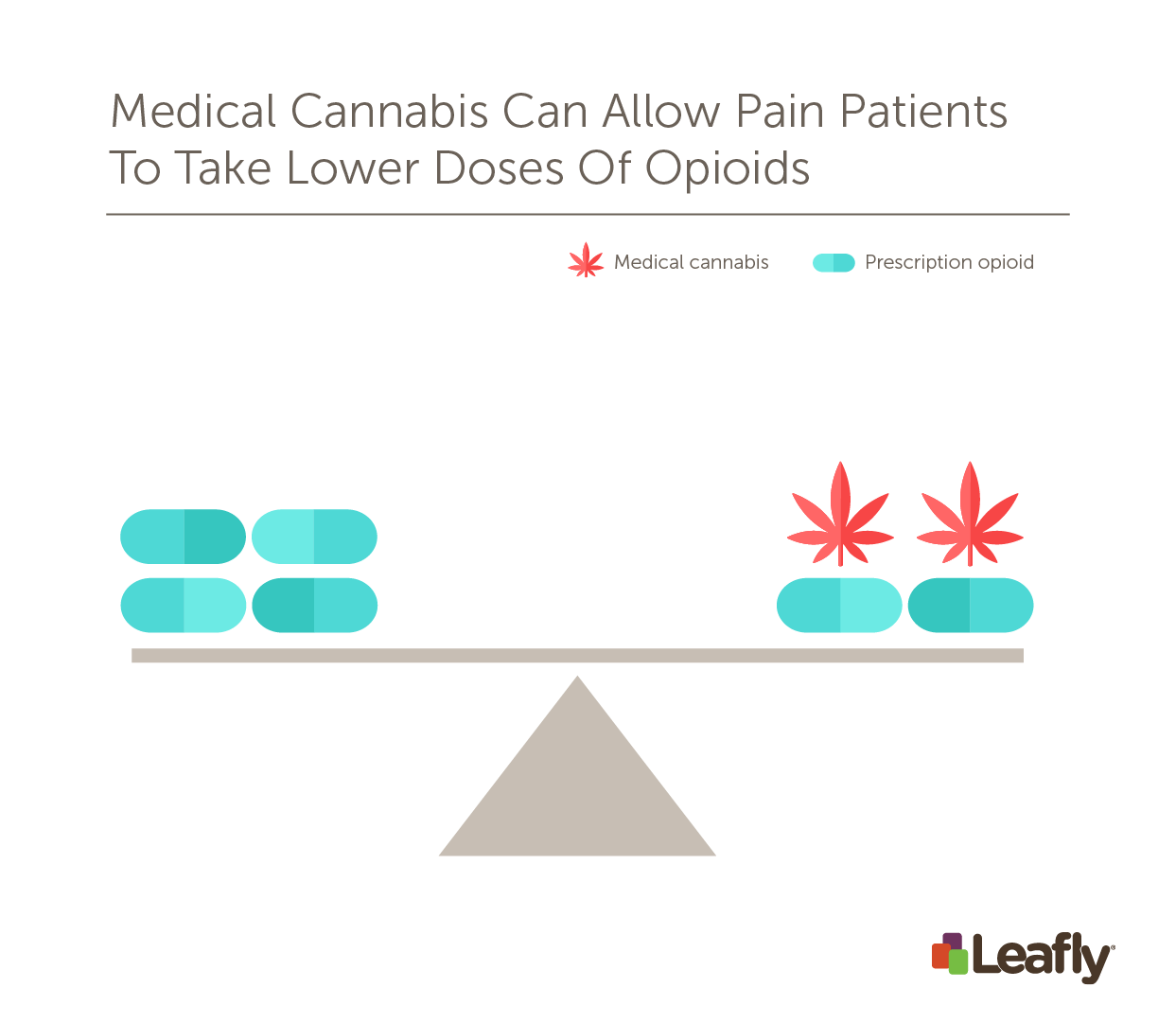 When THC and prescription opioids are co-administered, the same level of pain relief is achieved with lower opioid dosage. This can prevent some of the negative side effects of opioid treatment and allow patients to reduce opioid use. (Photo credit: Amy Phung/Leafly)

For instance, a recent double-blinded, placebo-controlled study (the gold-standard in clinical research) investigated the effects of low-dose cannabis (5.6% THC) and the opioid drug, oxycodone (2.5 mg) on pain thresholds in human subjects. Neither THC nor oxycodone independently affected pain, but when used in combination, participants were able to withstand higher levels of painful stimuli consistent with substantial pain reductions.

To achieve these pain-relieving effects, could THC’s primary target, cannabinoid type I (CB1) receptors, and opioid receptors be working together? There’s evidence that they do.

So CB1 receptors are important in opioid drugs’ ability to make you feel good and reduce pain.

These are two critical elements driving the opioid epidemic and an integral component of the pain experience. After all, pain is subjective. The severity of pain is determined by numerous factors including:

Opioid medications predominately target two of these factors. First, they weaken the strength of the pain signals from the site of injury to your brain, and second, they improve your mood by boosting levels of the pleasurable dopamine chemical.

These dual effects make stopping opioid use difficult, especially when repeated opioid use leads to long-term brain changes that reduce the number of opioid receptors in the brain and body. Lower numbers of opioid receptors enable stronger pain signals to enter your brain and reduces the levels of mood-boosting dopamine. This is the phenomenon of tolerance, which leads to increased opioid consumption, the transition to stronger drugs, and increased risk for overdose and death.

Pain signals begin at the site of injury, then make their way into the spinal cord and travel up to the brain. After exiting the spinal cord, they activate brain cells in critical pain processing regions including the periaqueductal gray, thalamus, and cortex. If you were to design a pain medication, you’d try to (a) weaken pain signals as they enter and exit the spinal cord and (b) dampen their effect in the brain.

Once activated by either opioids or cannabinoids, they share many common downstream signaling features. In fact, if you activate one receptor, it affects how the other one responds. This has led many to believe that the CB1 and µ-opioid receptors physically interact. The consequence of this interaction depends on where in the brain they’re found, but in some cases, it means that their co-activation by low amounts of drug leads to a stronger effect than what would be predicted by activating either CB1 or opioid receptors on their own.

So, taken together, cannabis can increase opioid’s pain-relieving effects by modulating opioid-receptor signaling directly through physical interaction between CB1 and opioid receptors, and by increasing the body’s own opioid levels.

What About CB2 Receptors?

THC’s other primary target, the CB2 receptor, can also interact with the opioid system but these effects are less well-studied. The greatest evidence for CB2’s effects on opioid signaling occurs at the site of injury, where activating CB2 receptors stimulates the release of endogenous opioids to help dampen the pain where it starts. As discussed in part one of this series, CB2 receptors play a large role in regulating inflammation.

Part one
Is Cannabis Better for Chronic Pain Than Opioids?
Part two
How cannabis relieves different types of pain
Part three
How Cannabis Enhances the Effects of Opioids
Part four
How to Use Cannabis to Reduce Opioid Dependence
Sign up for more Leafly news
Thank you for subscribing!