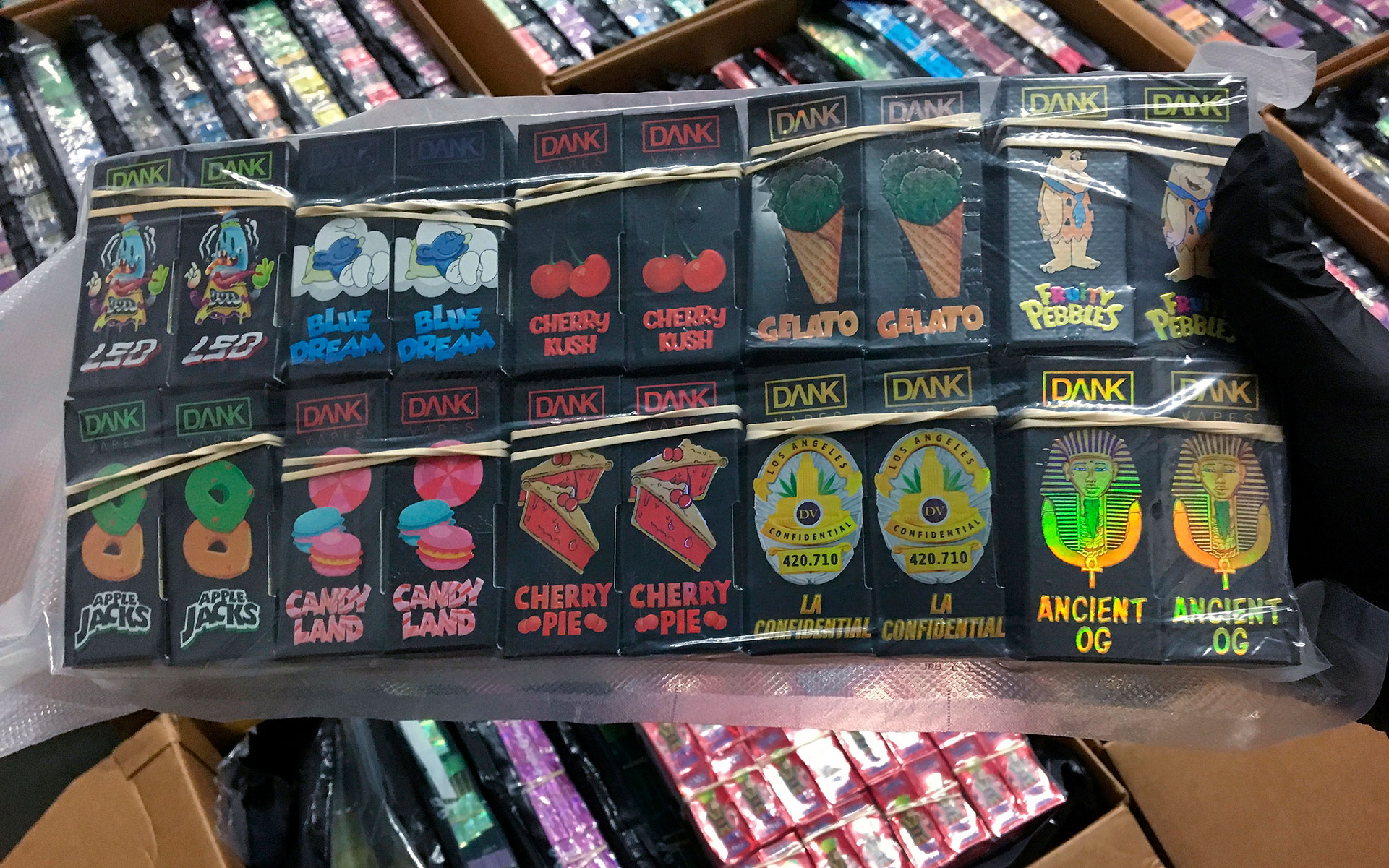 Dank Vapes, an illegal underground brand with no company behind it, remains one of the main health hazards connected to VAPI. Leafly found them for sale unlicensed stores in L.A. (Northwest Metro Drug Task Force/Minnesota Departments of Public Safety via AP)

LOS ANGELES — It’s a widely known vape cartridge in the cannabis economy, but it’s not a legal, licensed brand. And it’s got the kind of market buzz no legitimate company would want.

The illegal vape cartridges that go by the catchy, one-syllable name “Dank”—a slang word for highly potent cannabis—are figuring prominently in the federal investigation to determine what has caused a rash of mysterious and sometimes fatal lung illnesses (VAPI, or vaping associated pulmonary injury) apparently linked to vaping. Most of the cases have involved products that contain the cannabis compound THC, often obtained from illegal sources.

The suspect Dank vapes are a familiar product in the underground cannabis economy. It’s not a legal, tested brand. It’s not even a product brand at all. It’s merely a name on a box or a cartridge, packaging that’s easily obtained online and used by illicity producers to lure customers.

But with colorful boxes and names like Cherry Kush and Blue Dream, the homemade vapes appear convincing on the shelf.

“It doesn’t look very different from what you can buy in a (legal) dispensary,” said Beverly Hills-based cannabis attorney Allison Margolin.

So far, investigators have not identified a culprit in the illnesses reported in dozens of states. But officials say patients have mentioned the Dank name frequently. Many of the people who got sick in Illinois and Wisconsin, for example, said they used cartridges sold in Dank packaging.

The raw materials to produce a Dank vape aren’t hard to find: Ready-to-fill Dank boxes and cartridges can be ordered from Chinese internet sites for pennies apiece. A Craigslist post last week offered a box stuffed with empty Dank packages for $16. And you can buy the boxes and empty cartridges in shops in downtown Los Angeles.

“It’s a generic product name that doesn’t really tie back to one store or one distributor,” Dr. Jennifer Layden, chief medical officer for the Illinois Department of Public Health, said last month. “Folks are getting it from friends or folks on the street, with no understanding of where it came from prior to that.”

The chief selling point for pot Dank packaging: It’s a quick high on the cheap, available for as little as $20 a gram on the illicit market, roughly one-third of what a customer would pay for a cartridge in a legal cannabis shop in California.

But they come with risk. Products in the legal cannabis market are tested for safety and purity. Those in the illicit market are not,  and could contain pesticides, heavy metals, or other dangerous contaminants like cutting agents.

According to California records, no licensed company is manufacturing a cannabis vape carrying the Dank name.“It was never a legitimate company,” said Los Angeles dispensary owner Donnie Anderson. “It was always an underground brand.”

Given the shadowy pedigree of Dank vapes, it’s not surprising that details about its history are scarce. In California, the Dank name appears to have emerged during the largely unregulated medical cannabis era, prior to broad legalization that began in 2018.

Dispensary owner Jerred Kiloh, who heads the Los Angeles-based United Cannabis Business Association, recalls seeing Dank vapes for the first time about seven years ago. Kiloh remembers being visited by vendors selling them at his shop, though that stopped long ago.

What remains is the name, which has managed to retain a surprising cache in the underground industry.

Showing up in illegal vape factories

“Dank Vapes appears to be the most prominent in a class of largely counterfeit brands, with common packaging that is easily available online and that is used by distributors to market THC-containing cartridges with no obvious centralized production or distribution,” said a report by Illinois and Wisconsin officials, and from the federal Centers for Disease Control and Prevention.

Ron Gershoni, co-founder of vape producer Jetty Extracts who sits on the board of the California Cannabis Manufacturers Association, said the strictly regulated legal industry has been working to distinguish itself from the underground market that continues to thrive in California.

His company doesn’t view Dank vapes as a competitor, but he understands how the name has survived in the illegal market.

They “essentially sell empty packaging, and anyone can fill it,” he said. “It’s a business model that made sense to anybody who wanted to make a buck.”