David Bienenstock May 31, 2018
Share
Share on Twitter   Share on Facebook
Print
“When I was at Yale Business School people were lightweight laughing at me when I brought up working in the weed industry,” says Ebele Ifedigbo. “But now that same school just hosted a cannabis business conference.”

As co-founder of Oakland-based Hood Incubator, Ifedigbo sees the launch of a new legal cannabis industry as a “perfect opportunity” to build economic and political power in black and brown communities.

The business startup support center, co-founded by Ifedigbo, Lanese Martin, and Biseat Horning, is the nation’s first accelerator program specifically designed to support people of color and those from marginalized groups as they transition from underground cannabis entrepreneurs to legal business owners. The Hood Incubator focuses on community organizing, policy advocacy and economic development, including operating an annual four-month, 100-hour intensive Pre-Seed Accelerator. 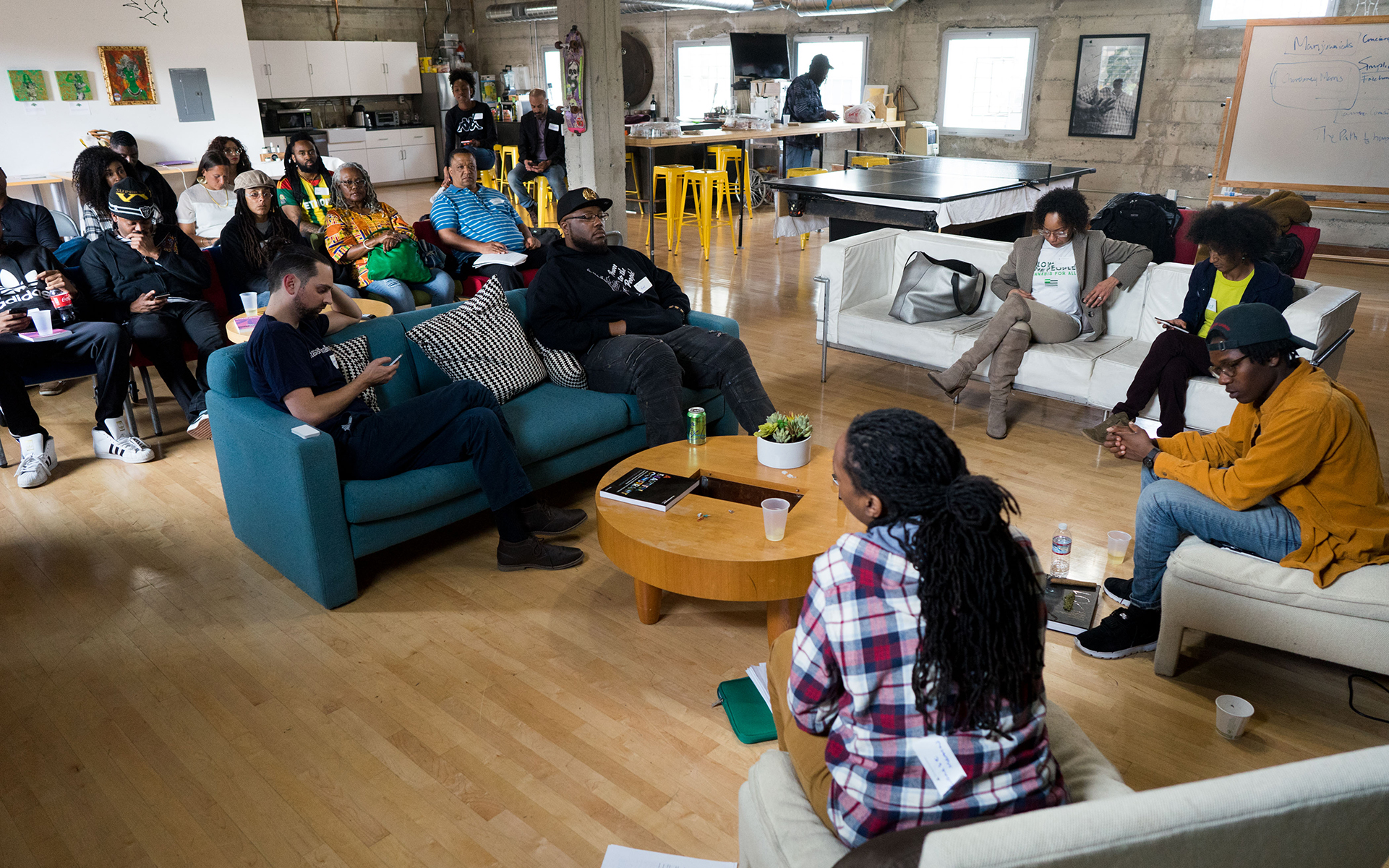 Ifedigbo believes those with experience in the “informal cannabis economy” should come out of the shadows and enter the legal industry as soon as possible, before competition from large, venture-capital backed competitors floods in and eats up market share.

That’s what the Hood Incubator aims to do. One of its slogans is: “Connecting the underground market to the green economy.” 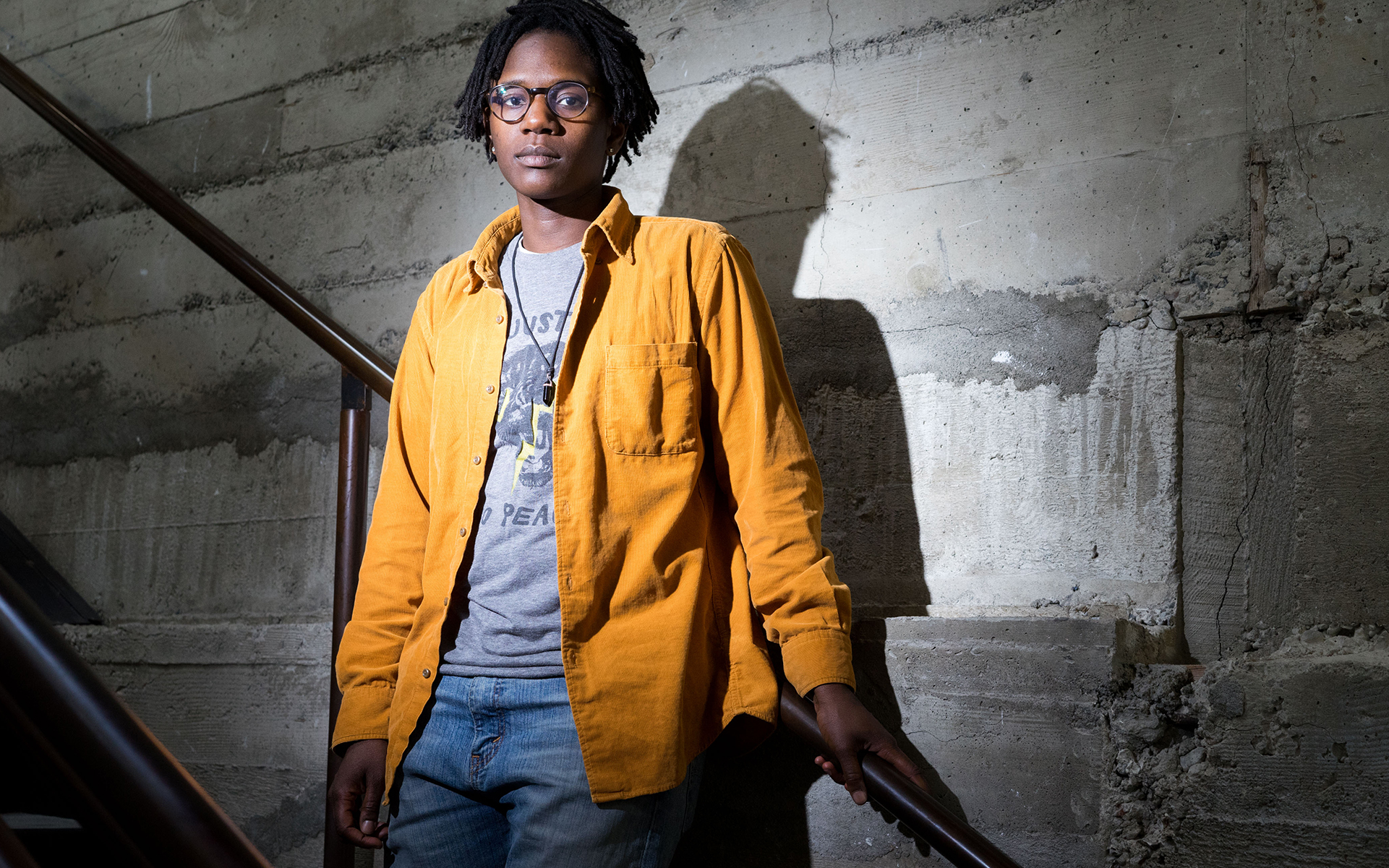 Linda Grant first heard about the Hood Incubator shortly after it launched in 2016. A longtime underground cannabis supplier in East Oakland, Grant had just posted a “rant” on Facebook in which she described feeling locked out of the new legal industry after selling cannabis locally for decades.

“An increasing number of dispensaries and delivery services started opening up, and they were basically white,” Grant told me. “Meanwhile, I’ve been to jail several times for weed and I know people who are still locked up for it. I felt like, what the fuck? I can’t even get a job in my own city where I’ve been selling weed for so long already.”

'That’s pretty much what I’ve been doing for work all my life, delivering weed' one incubator client says. 'So why not get a permit to do it?'

A friend replied to the rant with a link to the Hood, so Grant showed up at one of their open meetings. She was skeptical at first. But she saw that in addition to training people to launch businesses and land jobs, the organization also wanted to play a role in shaping and implementing Oakland’s equity law.

“I’m a protestor and a community organizer against police brutality,” she said. “I’m all for going to City Hall.”

Grant also realized that she herself qualified for Oakland’s equity law. She’s a lifelong resident of a neighborhood specifically zoned for the program, based on its long history of aggressive cannabis enforcement. She’s also been arrested and convicted several times for cannabis—mostly for tiny amounts, once for an ounce that landed her in jail for a week. That’s another way to qualify for the equity program. 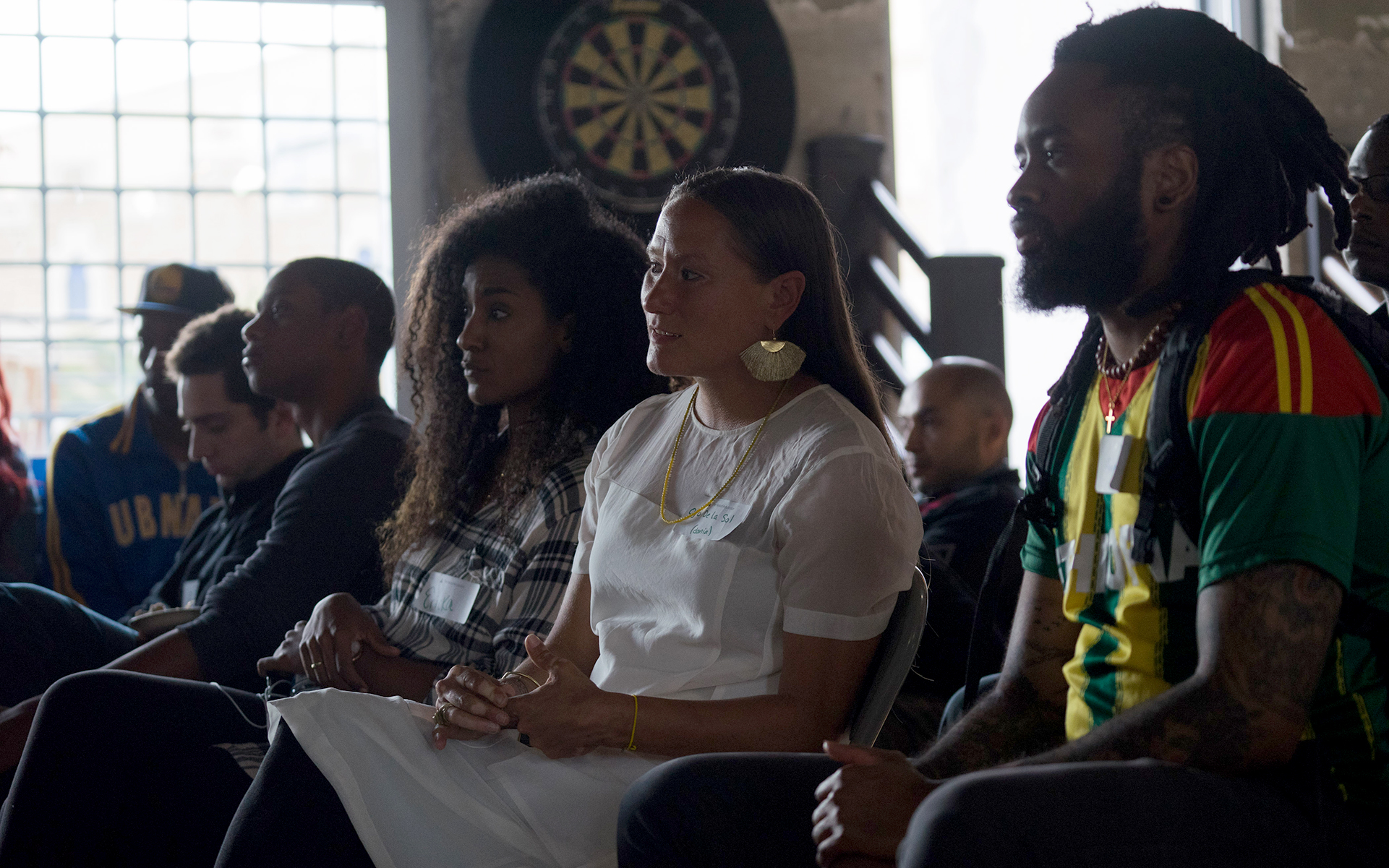 Hood Incubator attendees join in a discussion about opportunities in the cannabis industry. (James Tensuan for Leafly)

“An eligible Equity applicant is an Oakland resident who either has a cannabis conviction in Oakland after November 5, 1996, or has lived for 10 of the last 20 years in the police beats with disproportionately higher number of cannabis-related arrests,” according to the Oakland City Administration website. Equity applicants must show an annual income at or less than 80 percent of the 2016 Oakland median income. (That median income in 2016 was $57,778.) 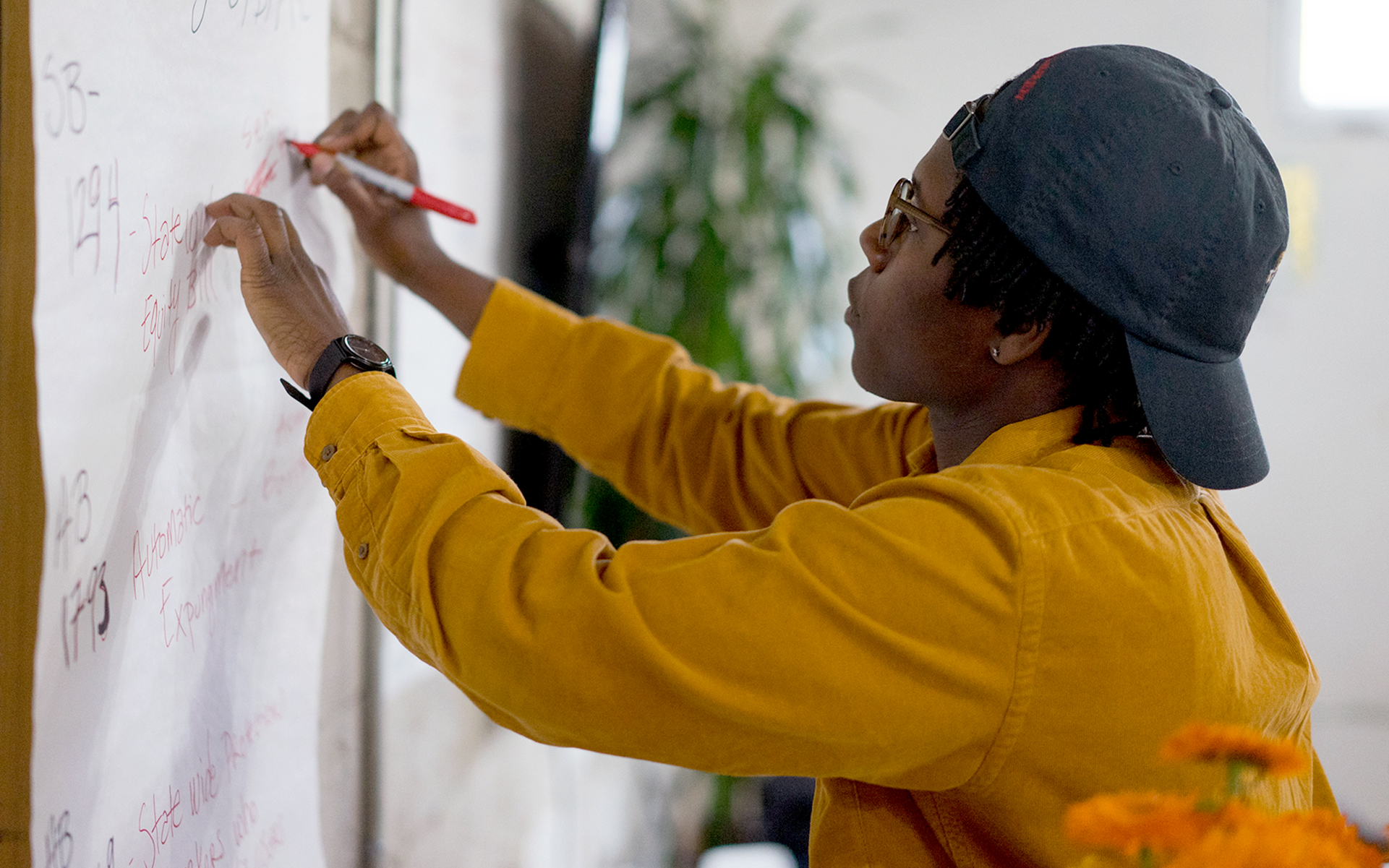 Co-founder Ebele Ifedigbo takes notes during a discussion at the organization’s office in Oakland. The Yale MBA grad previously worked at Goldman Sachs, and was named one of Entrepreneur Magazine’s “Most Daring Entrepreneurs of 2017.” (James Tensuan for Leafly)

At the Hood Incubator, qualified equity applicants can pair up with existing cannabis businesses that serve as “incubators,” which earn permitting priority over other applicants in exchange for “providing an Equity applicant with three years free rent for a minimum of 1,000 square feet for the Equity applicant’s business operations and any required security measure.”

Grant has paired with Gummi Cares, an Oakland-based edibles company. She initially considered opening a retail dispensary, but the cost of entry was too high and the number of dispensary licenses awarded in Oakland is tightly limited. She hit upon an alternative: Provide the retail service without the brick-and-mortar storefront. Starting a legal delivery business cost far less up front, made getting a license easier, and allows her to “bring the healing power” of cannabis to people who don’t shop at dispensaries anyway, because they’re too expensive or not located nearby.

“That’s pretty much what I’ve been doing for work all my life, delivering weed” Grant says. “So why not get a permit to do it?”

A mother of six (the oldest is 32), she doesn’t want to build a vast business empire or revolutionize cannabis. She’s in it for the jobs and community building. Grant plans to train and employ people from her community in hopes they’ll build up their skills and experience, and eventually branch off on their own.

I asked her if cannabis legalization is a major step in police reform.

“Hell no, this is not police reform,” Grant replies, without a pause. “They will always find something to use to criminalize us. You still can get arrested if you smoke in public housing, on the street, or in your car. So if you live in public housing, where are you supposed to smoke?”

But legalization has changed her view of City Hall.

“This process has really opened up my eyes to how things can change locally,” she says. “I’m basically an anarchist, because I’ve always believed the government only functions to oppress the people. But now that I’ve actually played an active role in helping to create and implement this law, I want to run for City Council.” 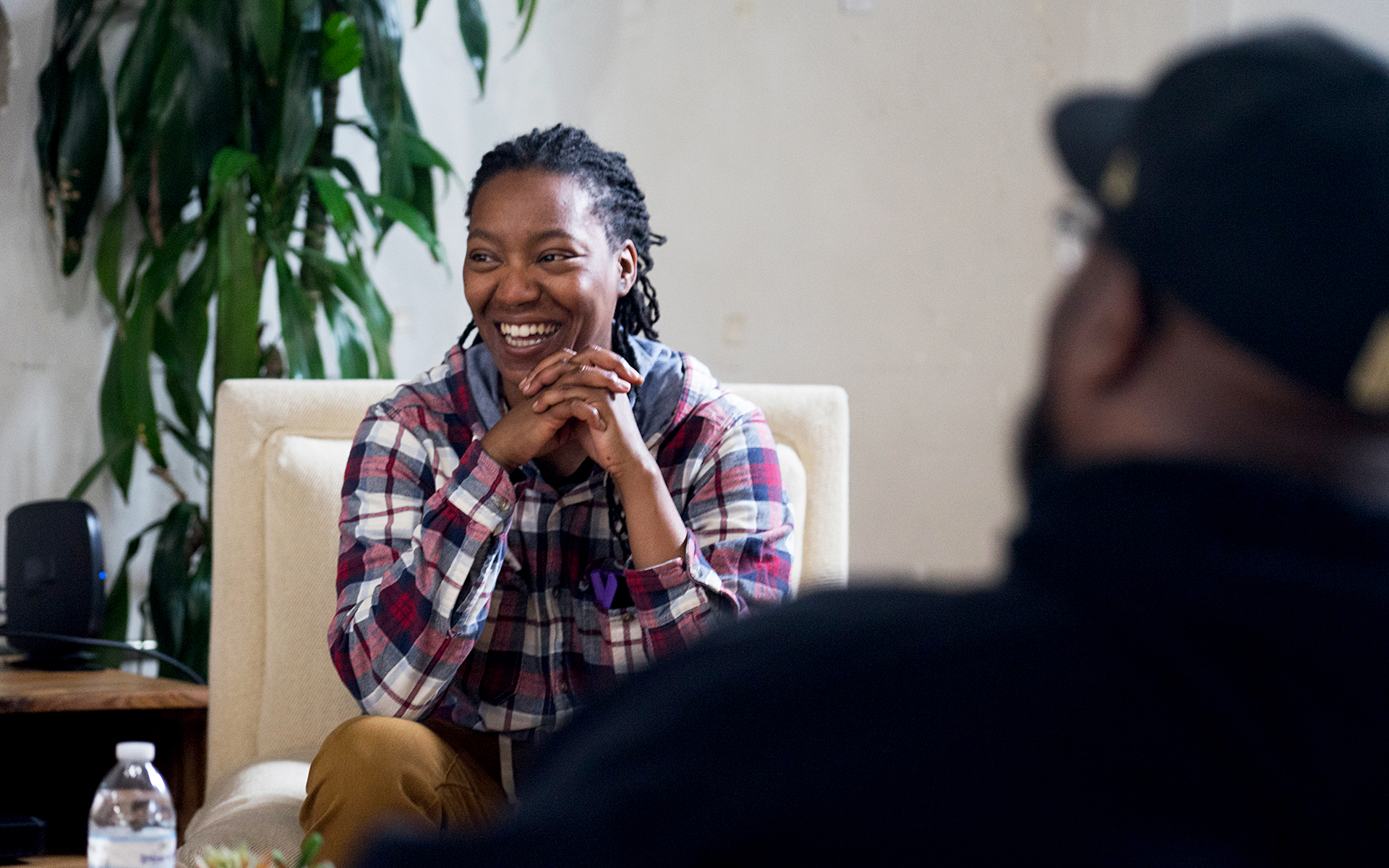 Lanese Martin, Hood incubator co-founder, has an MBA in sustainable enterprise and experience as a professional political consultant. (James Tensuan for Leafly)

The City of Oakland’s equity program, while groundbreaking, isn’t perfect. The costs of the program fall onto other cannabis companies, many of which are small and struggling. They must compete with new companies backed by venture capital, meet huge new regulatory burdens, and pay exorbitant taxes. And they’ve got to do it all without access to things that non-cannabis companies take for granted—like bank loans, standard tax deductions, and the fear of federal arrest, asset forfeiture and prosecution.

In Oakland, equity applicants face all this plus the additional hurdles that come with being a person of color, living in a low-income neighborhood, having a criminal record, or all three. Even the Hood Incubator’s co-founder says it’s still too early to assess the success of the city’s equity program.

“Just because you get a permit doesn’t mean you get the tangible support you need to become sustainable and succeed,” says Ebele Ifedigbo. “But we can’t just keep doing what we’ve been doing because of fear or lack of imagination.”