Every year for the past decade, and perhaps dating as far back as to 2004, on the sacred and holy day of April 20, Nike SB, the company’s skateboarding division, has released a limited run of high top sneakers celebrating marijuana and getting high.

Last year it was a fuzzy high top  of different textures and panels, given the retail name “The Dog Walker.” 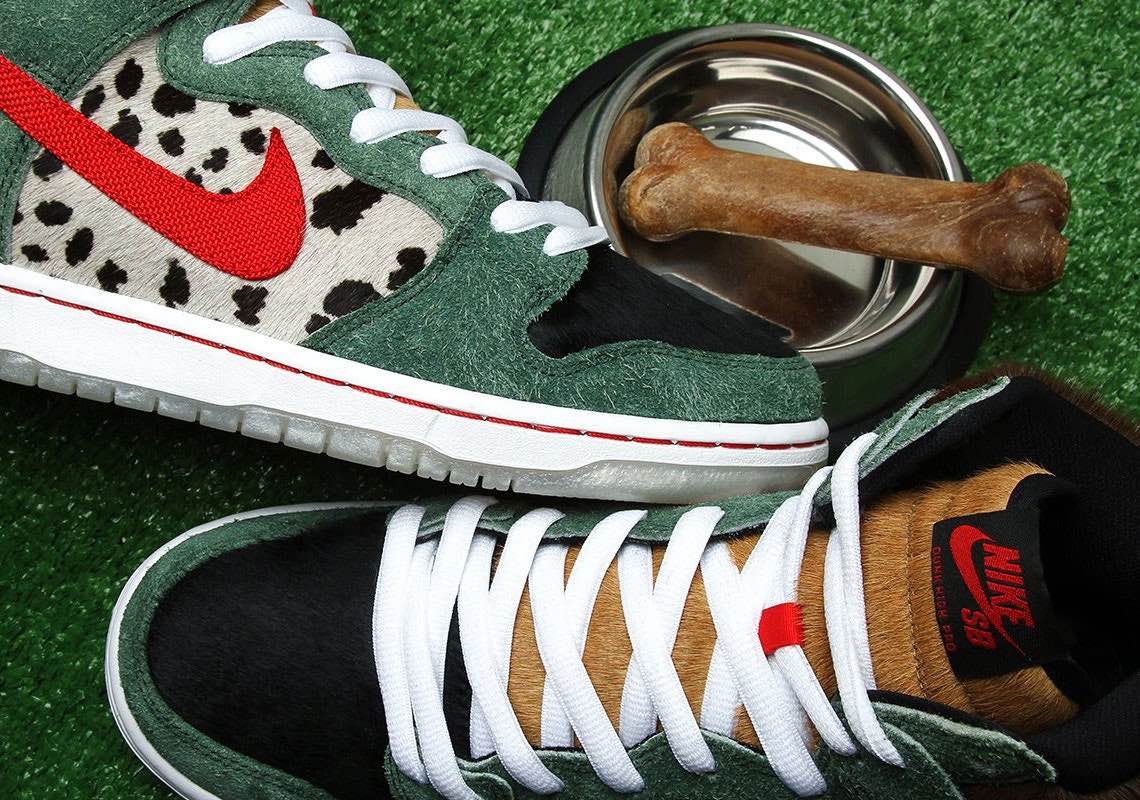 As befitting its title, the sneaker had green suede, hairy black and brown spots, red swooshes. Bone shaped tags were attached to the rear, and spare laces came in doggy bags. The Dog Walker retailed for $110 and sold out the day it was released.

Early word in sneakerhead culture has this year’s Nike 420s coming out in red and green suede, with the name “Strawberry Cough SB Dunk High” to honor the popular cannabis strain. A small comic rendering of a coughing strawberry sits on the shoe’s outside heel.

An Instagram post by nikesbornothing gave aficionados a sneak peek at a prototype back in early March:

According to the website Sole Collector, the shoe is the work of artist Todd Bratrud, who created past 420 classics like “Skunk” Dunks and “White Widow” SB Dunk Mid.

Not to be outdone, the folks at Adidas Skateboarding traditionally release their own 420 edition. Last year their $120 lowtop samba sneaker “Purple Haze” made explicit its connection to the muscular strain of cannabis it was named for. The sneaker was purple velvet, with a fuzzy, hairy suede wrapped around the toe.  “Good vibes” was stitched across the tab on the heel. 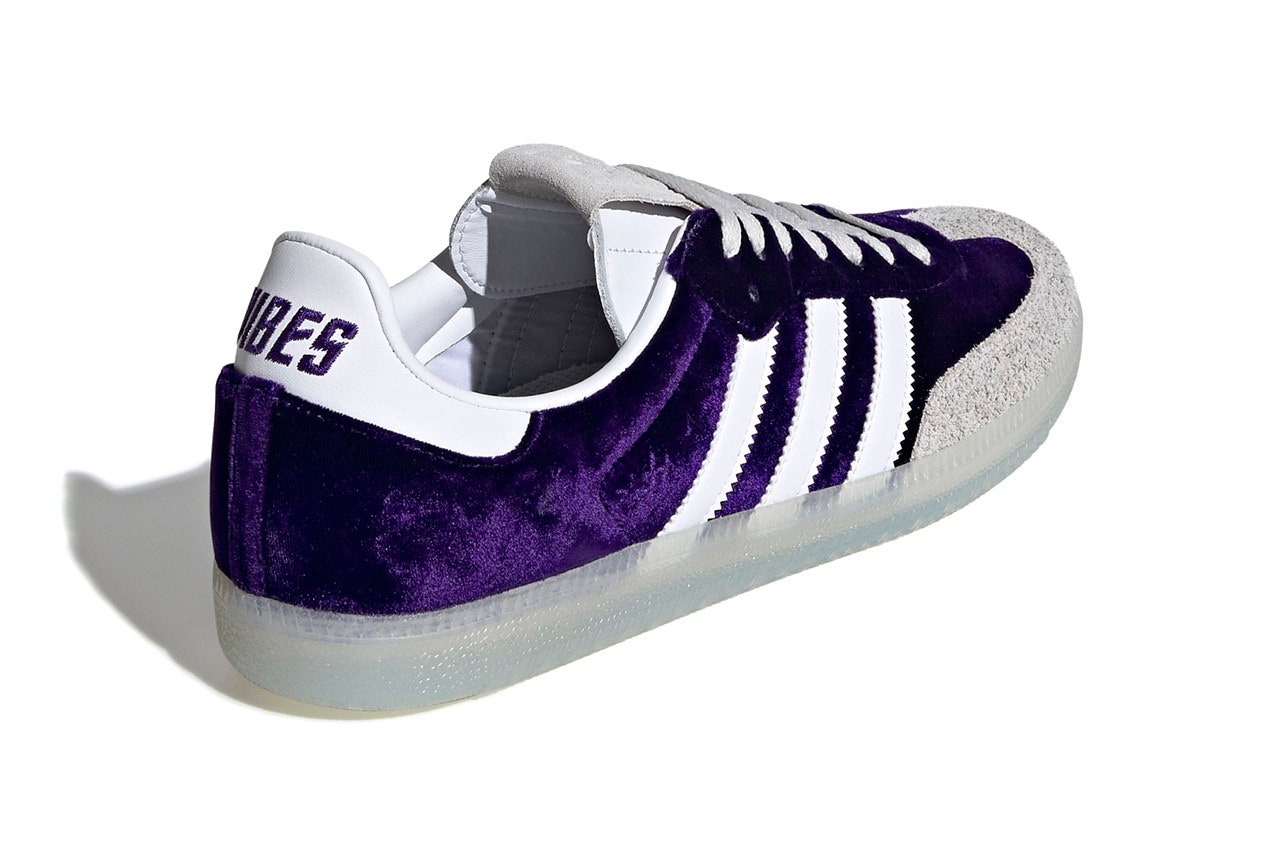 The “Happy 420,” was made of high-grade homegrown hemp, but the sneaker body had been heat pressed with a pattern of small stones, done in a nod to the burning of hemp.  The heels were done in a hairy chunk suede to “reflect the texture of cannabis buds.” Of course there was the ubiquitous secret pocket behind the tongue for a stash,  but the Happy 420 had a blissed out face on the front of its tongue, and, in a nod to a medical cannabis, a prescription label reading, “High-potency superior quality.” The pull tab on the heel also had a fake prescription label, which in part read: Dosage “420 mg, take once daily.”

How and why has the sneaker world become the latest place not just to fetishize, celebrate, monetize, and maybe even co-opt 420?

Nike and Adidas both ignored our emails. But an unofficial investigation has turned up a few tidbits.

Nike was late to the game, but made up lost time by converting a college basketball shoe into a skateboarding sneaker.

By now you know the story of 420. (If not, Leafly has a deep dive into its history here.) 420 is universally recognized as referring to marijuana, and 4/20 has become the official day of celebration for cannabis consumers worldwide.

Sneakers entered the picture in 2002. Nike was a latecomer to the skateboarding market. They made up for lost time by starting up their SB (skateboarding) devision, and resuscitating the 1986 Dunk, an eighties hightop once associated with college basketball, as their flagship skateboard shoe.

Nike also made an effort to appeal to a specific demographic. The college hoops-era Dunk had been known for colors associated with specific teams, like UNLV’s red and silver, or Syracuse’s orange and white. In its SB iteration, bands with Gen X attachments received their own themed Dunks. There was a silver pair with purple piping for Dinosaur Jr. 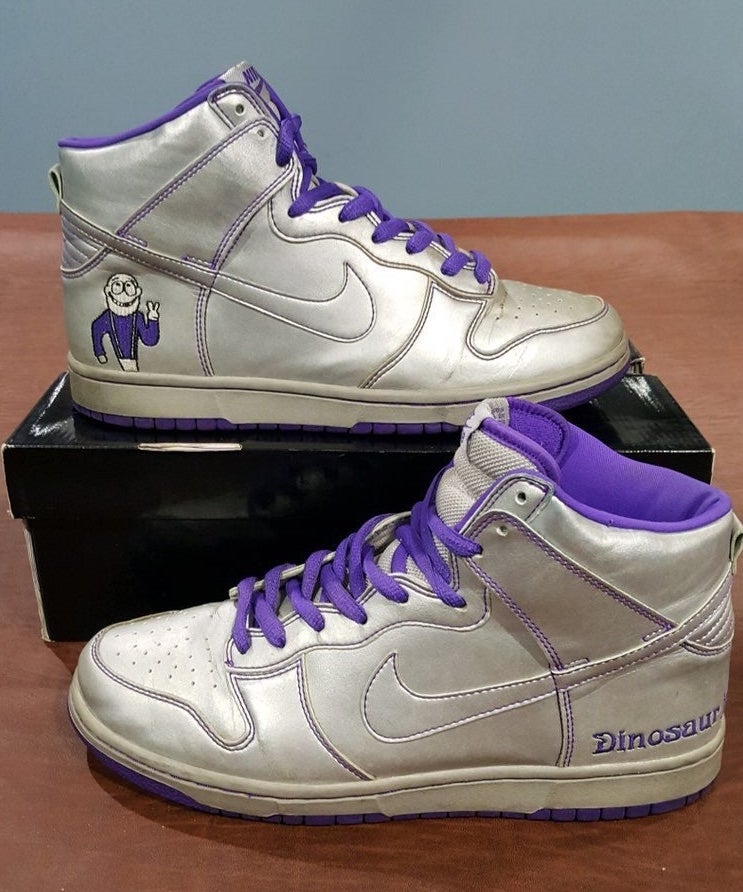 The Melvins actually got two pairs of sneakers—the more popular model was done in black leather with graffitied lyrics and the skull and crossbones from a Melvins album cover. 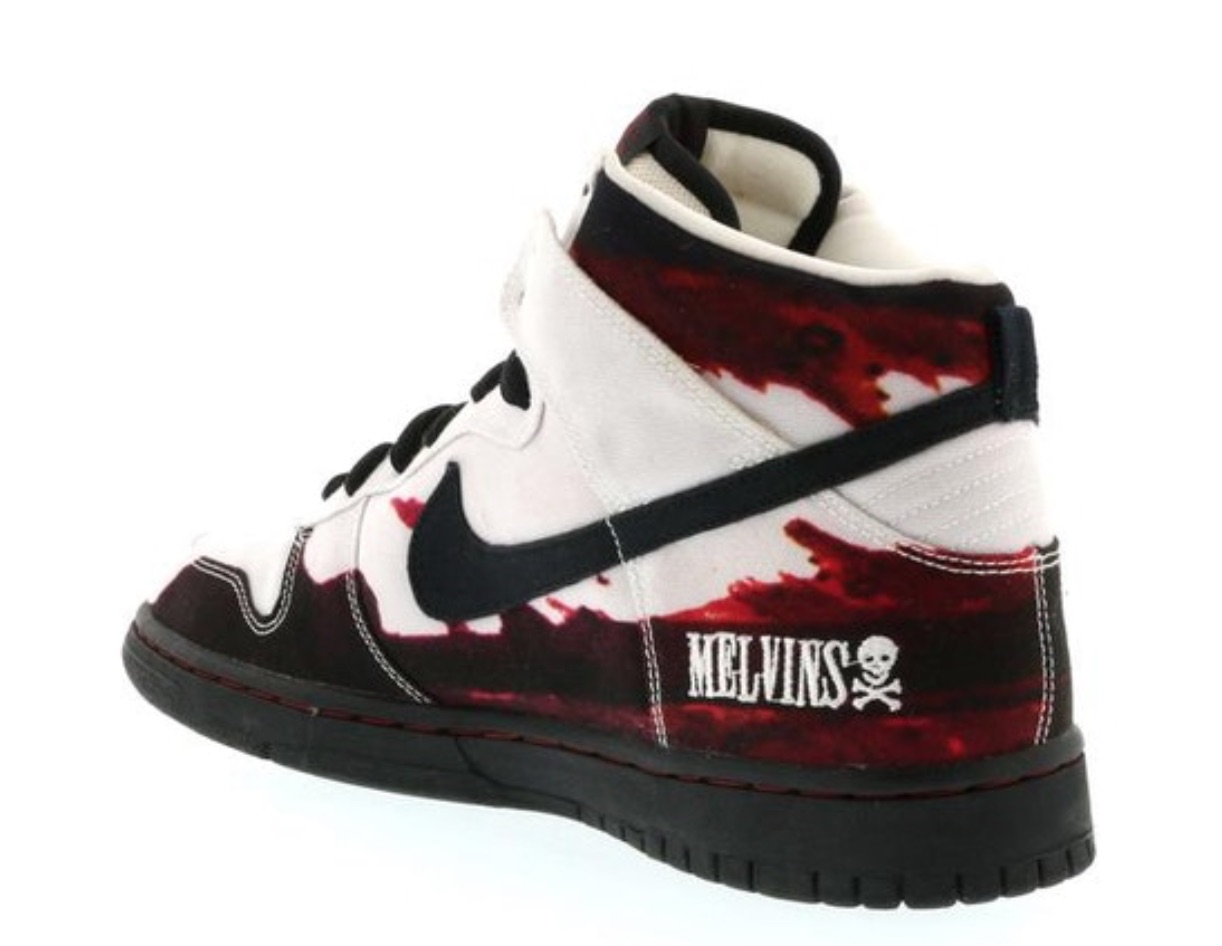 Melvins SB sneakers, now in the $565 range on stockx.com.

The first explicit connection between sneaker culture and 4/20 took place in 2004. Nike released a lowtop sneaker made of hemp, with a maroon swoosh, on April 16.

But it was four days later, when the company released a hemp sneaker with a blue swoosh and blue soles, that the connection became explicit. This we can consider our ground zero moment. (A size 13 pair of those blue sneakers can currently be had at a sneaker reselling site for a cool $579.) 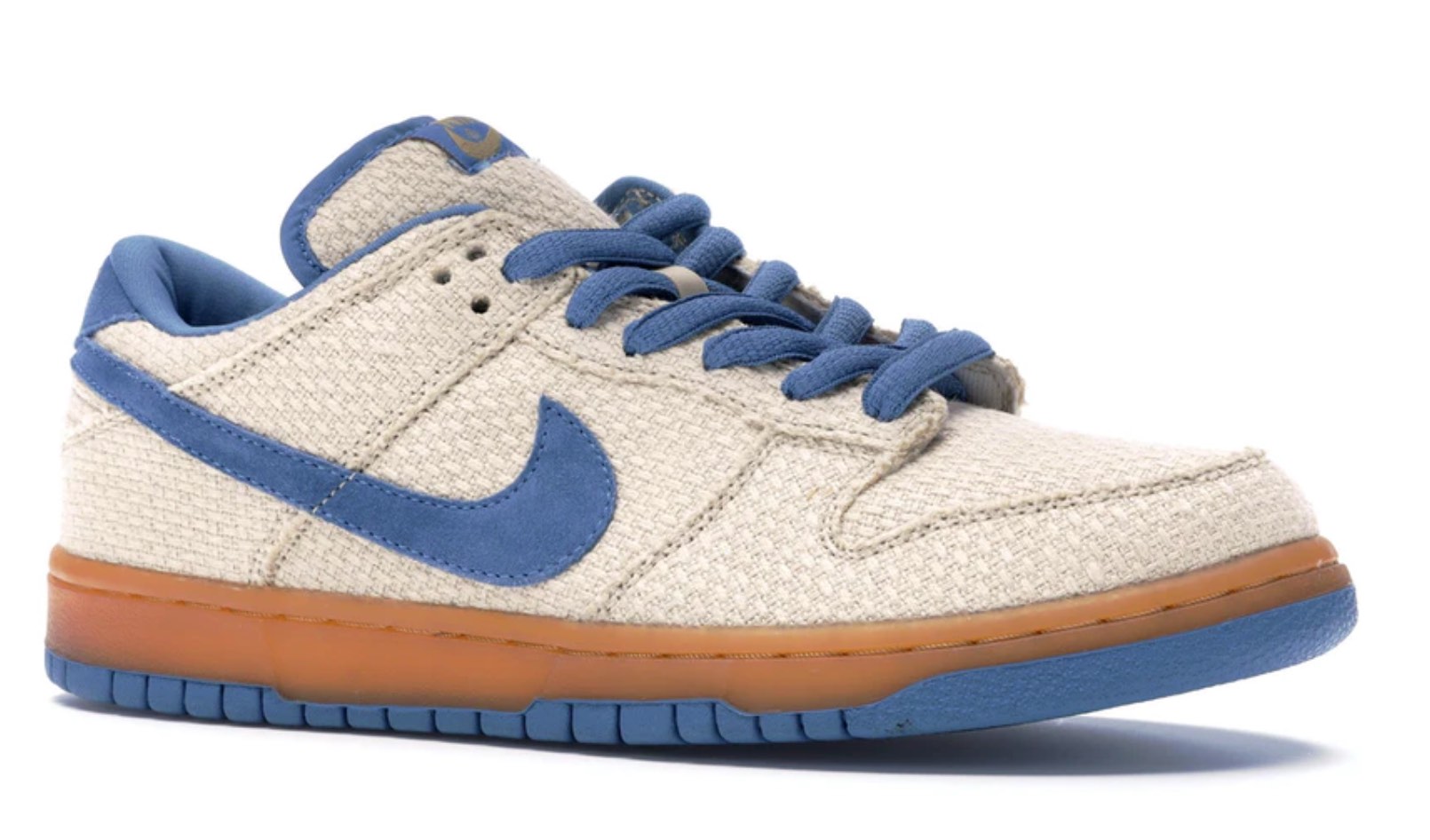 The following year, Adidas responded with their own April 20 release, a lowtop black hemp sneaker. Its trademarked Adidas stripes done in the colors of the Jamaican flag, the shoe was given the sobriquet, “Bucktown Hemp Rasta.” 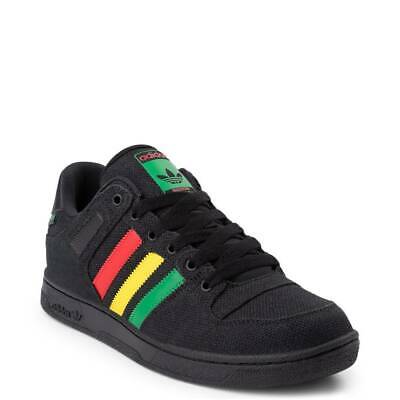 It would be fun to say that from this seedling, the celebration of sneakers and buds bloomed to full flower. The truth is a little cloudier.

Research doesn’t turn up 420 releases for 2007 but does shows Adidas releasing lowtop Superstars in the earth tones of a Phillies Blunt in 2008.  The critic at eatmoreshoes.com described that edition as “a holy grail for some” sneakerheads, “These Adidas Superstar 1’s come from the combined effort of the well-known tobacco manufacture Phillie and the original Trefoil tribe.” 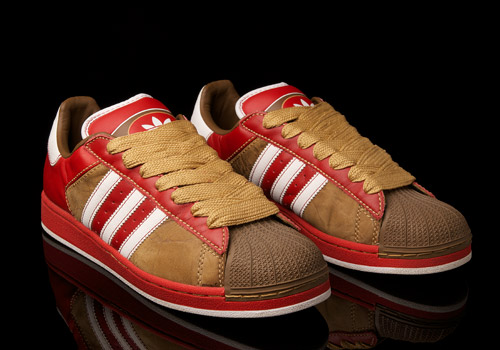 Definitely a classic: Adidas’s 2008 homage to the Phillies Blunt.

Which takes us to the the alpha and omega, the sneaker universally acknowledged as the greatest marijuana sneaker of all time, the 2010 Nike Dunk SB High “Skunk.” 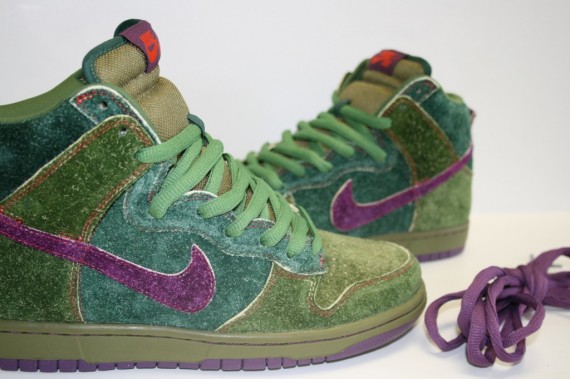 Done in different fuzzy green tones so that its uppers imitate grass—and who knows, maybe the look of skunkweed—the sneaker also had purple swooshes, a stash pocket inside the tongues, and a giant green skunk on each inner sole. The sneaker was celebrated online and immediately sold out.

After the success of the Skunk, the pot sneaker 420 arms race was on.

The following year Nike offered the Dunk High Cigar City, done in the rich brown of a blunt casing. The streetwear brand Huff joining the party with the Huff 420 Pack (2011) and the High Times Hupper (2012). Diamond Supply Company, another streetwear brand, put out the Green Weed Camo (2013).

Also in 2013, the skateboarding brand Supra collaborated with rapper Li’l Wayne to make a move on the crown, releasing the S1W Tree Camo Vice Pack, a hightop whose nylon surface was superimposed with close ups of buds. 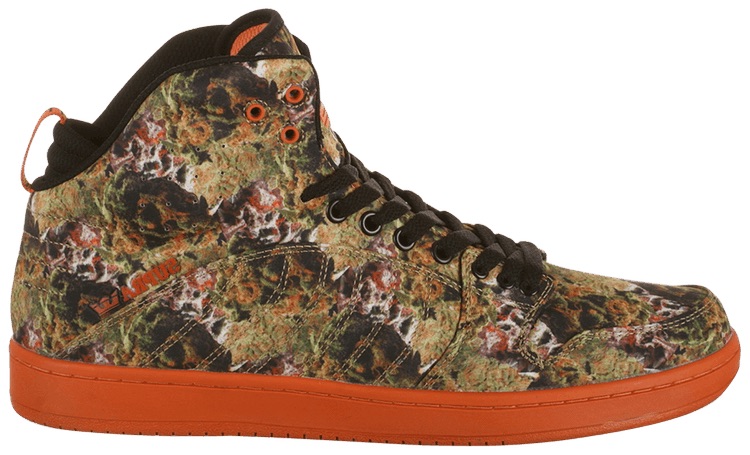 Lil’ Wayne got in the game with these Supra 420 sneakers released in 2013.

Now it’s a crowded field. There’s been the Ascis Gel Rasta Pack, the Emerica Bud Hunter,  and of course Vans, the original skate shoe, has put out enough sneakers with marijuana leaf symbols on them to smoke out untold vans in untold high schools.

Part of the culture now

One year, Foot Locker’s House of Hoops website rated the best weed-inspired sneakers. Another year, a website called Sneaker Freaker celebrated the day with the best five sneakers with pouches to hide your stash. On April 20, 2015, the pop culture site Complex published writer Angel Diaz’s missive comparing his love for sneakers to his love for marijuana. (“Another thing weed and sneakerheads have in common?” Diaz wrote. “We stay broke.”)

Last year the fashion critics at GQ and Hypebeast covered the 420 releases. But the most inspired happening took place in 2018, when the website Sole Collector convinced Cheech Marin to comment on a number of marijuana inspired sneakers. Cheech took a special liking to Nike’s April 20, 2011, release,  named “Cheech and Chong” for its homage to the differently toned red bandanas that each member of the comedy duo wore. 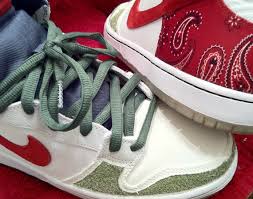 Reported Cheech: “Those are nice. Once again. The craftsmanship seems really good. I like the bandana. Oh wow! That’s Tommy’s bandana! I was looking at it like it was more cholo. Yea, and the red top for me. Cool. Are these official shoes? I’d like to get a pair. Nike puts these out? I’m gonna check on these guys.”

There is no word yet as to whether Cheech Marin received a complimentary pair of Cheech & Chong 420 dunks from Nike. We will update this story as details warrant.

Oliver Culvert is a writer based in Brooklyn, New York.

Politics
Interstate compacts could allow regional cannabis trade to flourish
Industry
Is my dispensary open? Can they deliver cannabis now?
Lifestyle
Here's how cannabis curbside pickup in Massachusetts will work
Industry
Massachusetts marijuana stores to reopen on Monday
Sign up for more Leafly news
Thank you for subscribing!