David DownsMarch 15, 2019
Share
Share on Twitter   Share on Facebook
Print
Former House Speaker John Boehner appeared at the first-ever SXSW Cannabis Track on Friday. He predicted an end to federal prohibition by 2020, and drew protests over racial inequities in drug laws and legalization measures.
With a record 63% of Americans now supporting cannabis legalization, federal prohibition could fall by the end of 2019 or early 2020, former US Speaker of the House John Boehner told a packed house at SXSW in Austin on Friday afternoon.

The former GOP leader, who joined the board of cannabis company Acreage Holdings last year, delivered his remarks to festivalgoers at the Austin Hilton.

Boehner’s talk wasn’t all optimism and cheers, though. His presence drew a small protest organized by drug law reformers, and his session prompted occasional jeers. The protesters and critical audience members objected to Boehner, who actively supported the war on drugs and opposed legalization during his political career only to cash in on the booming cannabis industry now that others have done the hard work of reform. 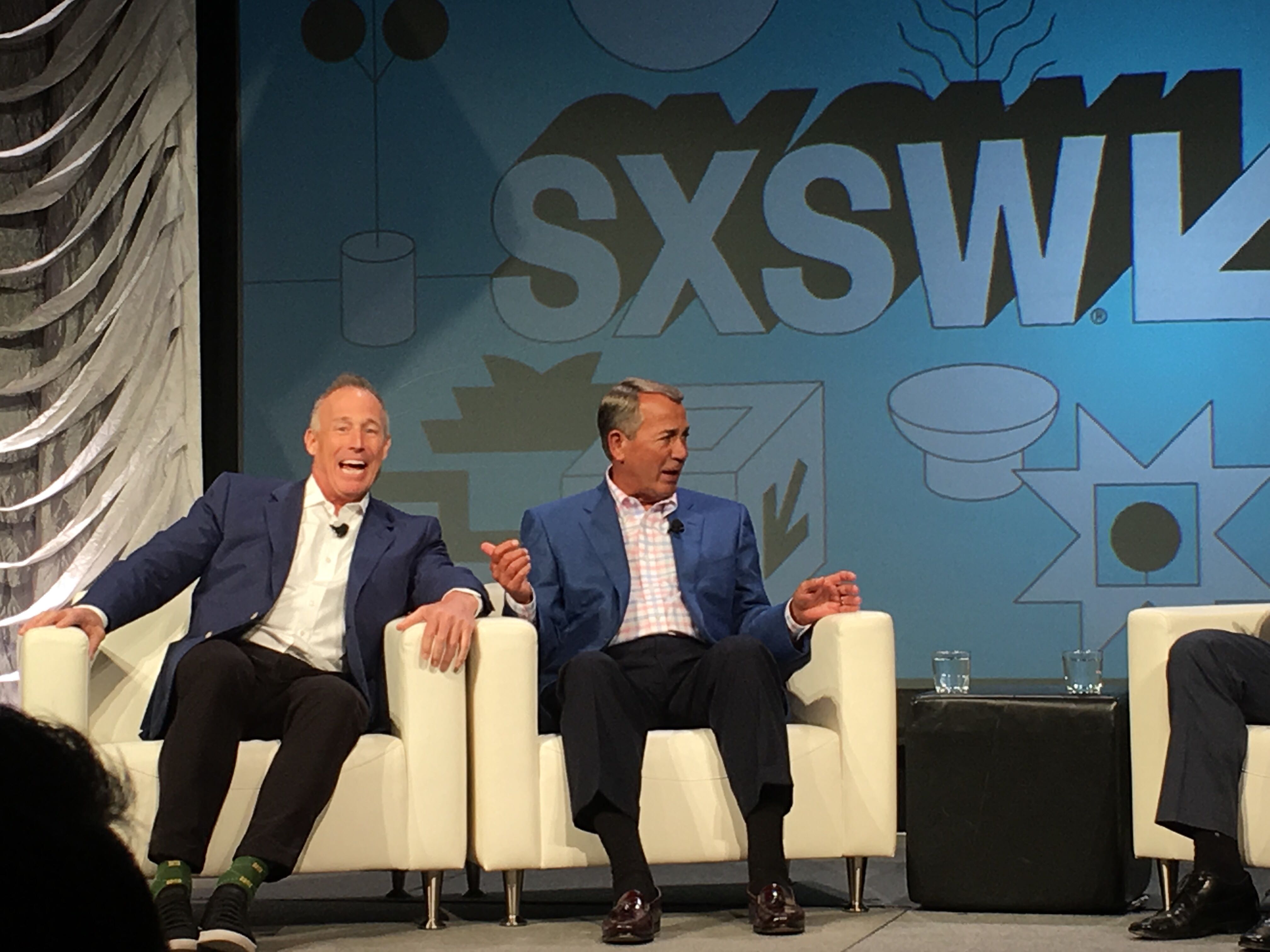 During his hourlong chat with Acreage Holdings Director Kevin Murphy and interviewer Tim Seymour, the former Ohio representative said he had never smoked pot but was open to using future products for sleep. “I take Advil PM for sleep every night,” Boehner said. “I like Advil PM. But there may come a time when I don’t want to take Advil PM.”

Boehner joined Acreage—a cannabis company now operating in 19 states—after hearing about cannabis investment opportunities. “This industry is going to grow exponentially over the next 10 years,” Boehner said. He predicted that it would eclipse tobacco’s $50 billion in annual revenue.

Boehner said he began listening to anecdotes about cannabis’ use for veterans with PTSD and children with intractable epilepsy. After talking with doctors, Boehner decided, “I’m going to lend my voice to this debate, and it was quite a shock.”

He said his former colleagues in Congress “tease me all the time about it, but it doesn’t matter.”

The ensuing flood of patient stories has moved him, he said. “The people that have come up to me every single day for the last year has shocked me.”

STATES act will end it, he says

Boehner predicted that Congress would end the war on marijuana by passing the STATES Act, which exempts legalization states from the Controlled Substances Act. Boehner said historical inertia—more than pro-drug war forces—have prevented reform from taking place on Capitol Hill.

“It’s not that Washington is purposefully getting in the way,” he said, “it’s just they have been in the way and they haven’t gotten out of the way.”

“So the federal government just needs to get out of the way. Right now, I think the STATES Act is where most of the momentum is.” 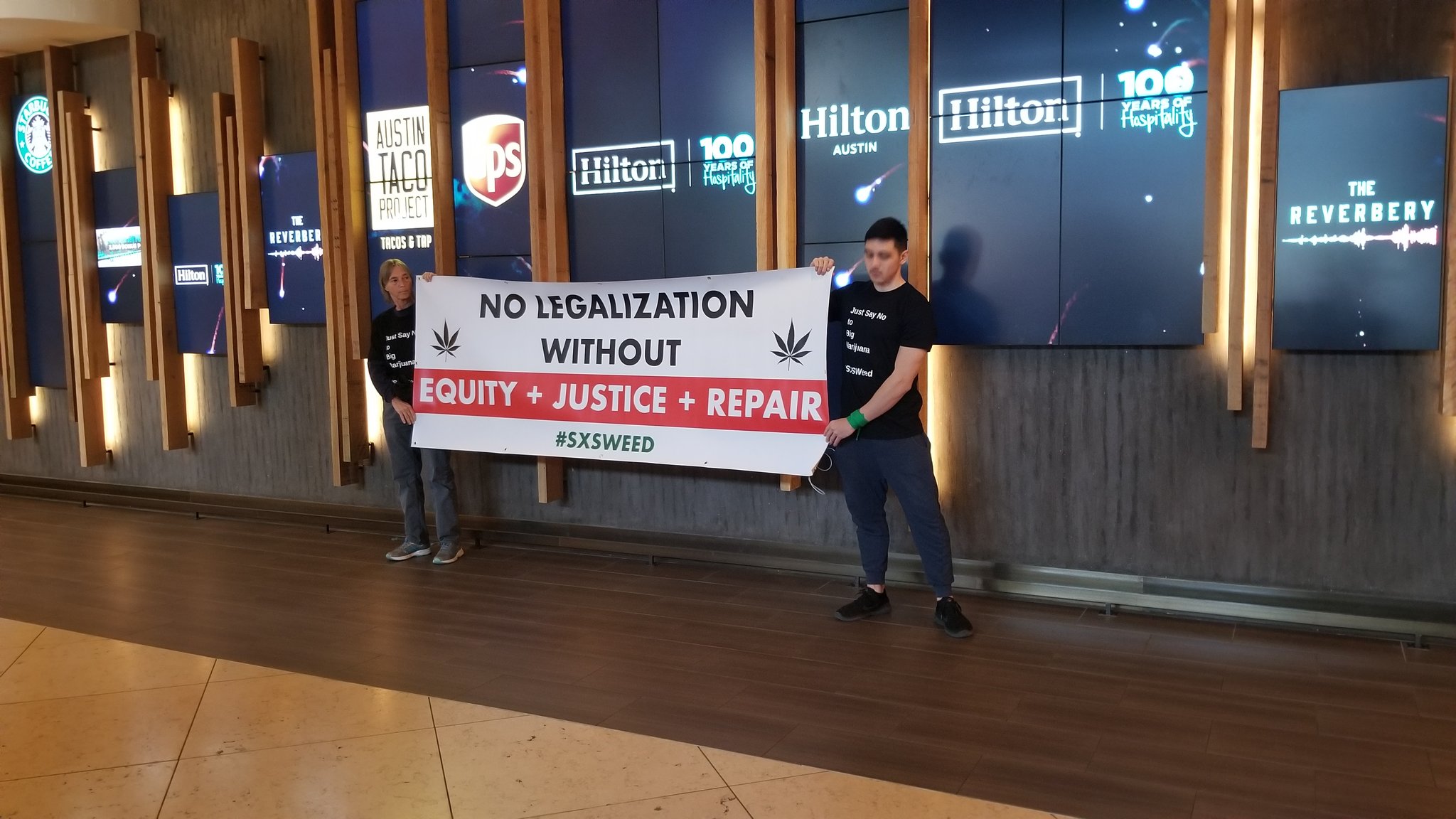 Legalization has entered a phase where American society is deciding not if prohibition ends, but how it ends—and who should benefit.

That reality prompted a coalition of 30 drug law reform groups, called the Equity First Alliance, to stage a protest of Boehner’s talk. About a dozen activists from Austin, Los Angeles, Massachusetts, and other locations gathered downtown Friday morning with banners and shirts demanding that social reforms accompany any and all cannabis legalization measures.

Rocking the hashtag #SXSWEED, the group hung its banner on an overpass above Austin’s main freeway, and later raised it inside the downtown Hilton Austin, headquarters for the SXSW cannabis track. Equity First Alliance members also attended Boehner’s talk, filing formal questions and shouting questions from the crowd.

No legalization without equity

“We don’t want prohibition 2.0,” with an industry in the hands of the wealthy elite, said activist Joe Gilmore, 25, who came from Massachusetts.

Gilmore and others demanded that new legalization measures include automatic expungement of past cannabis crimes, and that 10% of industry profits be earmarked for neighborhoods hard hit by the drug war. They called for Boehner to divest in any private or public prison stock or ownership.

Activists were escorted out of the Hilton and continue to protest outside on the sidewalk. #SXSW #SXSWeed #WarOnDrugs pic.twitter.com/2VQBeO9bFb

“Black people will continue to go to jail if we don’t have these systems in place,” said Gilmore.

Felicia Carbajal, a Los Angeles equity activist, called for not only equity programs on day one of new legalization, but wraparound services for illicit drug sellers who seek to go legit—like business loans, retail leases, and regulatory training.

“This is Compassionate Cannabis 2.0—social equity,” she said.

Beyond Indica & Sativa: The Future of Cannabis Strains Waits for You at SXSW

Boehner responded to questions about his political evolution by noting that he championed federal drug sentencing reform for 15 years. Boehner also said the vast majority of cannabis convictions happen at the state, not the federal level. He called on states to expedite reforms.

Acreage Holding’s Murphy said his company could spend more money on corporate philanthropy if Congress were to update old tax codes, which punish legal cannabis businesses. Acreage deployed $202 million in investment in 2018 and lost $217.6 million in the same period.

Murphy noted that Acreage Holdings is pushing for legalization through its marketing. Their rejected $5 million Super Bowl ad, a montage of personal anecdotes attesting to medical cannabis’s efficacy for childhood seizures and chronic pain, has reached over two billion impressions.

“We can’t rewrite history,” Murphy said. “But we can ensure a bright future for the compassionate use of cannabis.”