Historians have long been aware of the use of cannabis in ancient times. It’s one of the oldest cultivated plants in East Asia, and references to it appear in written texts as early as 1,000 BCE.

Now a group of researchers from the Chinese Academy of Sciences has added something significant to the historical record: a 2,500-year-old bong.

Technically, it's a wooden brazier. But really: It's a bong used to smoke out the room at a funeral.

The archeologists who discovered the ancient smoking device refer to it more scientifically as a “wooden brazier,” but essentially it’s a big ol’ group bong used to hotbox the ceremonial hut at funerals. (A note for our experienced readers: Yes, a bong is technically a water pipe, and there is no water involved in this 2,500 year old device. We’re using the word ‘bong’ here as a clear, effective way to communicate the fact that it was used to smoke cannabis. Nobody talks about ‘tobacco bongs.’)

The research, led by archaeologist Meng Ren and published earlier today in the journal Science Advances, noted that chemical analysis of a burned botanical residue at the Jirzankal Cemetary in the Eastern Pamir region of China “indicates that cannabis plants were burned in wooden braziers during mortuary ceremonies.”

“This suggests cannabis was smoked as part of ritual and/or religious activities in western China by at least 2,500 years ago,” the researchers wrote, “and that the cannabis plants produced high levels of psychoactive compounds.”

Ten wooden braziers were found at the site. The braziers essentially look like very large one-hitters. A deep rounded well has been carved into the wood. Walnut-size rocks were inserted into the vessel—presumably these would have been heated in a nearby fire, because the wooden bowls were slightly charred and some of the rocks contained a burned cannabinoid residue. 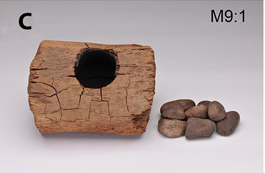 The braziers were recently exhumed from eight tombs at the Jirzankal Cemetary, an ancient burial site that dates to approximately 1,500 BCE.

Testing revealed the chemical signature of CBN on all of the burned residue inside the vessels and on some of the stones. CBN is the oxidative metabolite of THC—in other words, it’s what’s left over after THC combusts.

The discovery announced in Science Advances provides some of the first evidence backing up the famous claims of the ancient Greek historian Herodotus. In his classic The Histories, the author described residents of the Caspian Steppe region smoking cannabis during the first millennium BCE.

As Meng Ren and others noted in their writeup:

[Herodotus] noted that people would sit in a small tent, and the plants were burned in a bowl with hot stones. Frozen tombs from the Pazyryk culture (ca. 500 BCE) in the southern Altai Mountains of the Tuva Republic, Russia, seem to corroborate the account of Herodotus, despite being located over 3,000 km to the northeast… Furthermore, according to The Histories, ancient Scythians used the cannabis smoke as a cleaning rite (similar to bathing) after [a burial ceremony]; however, the smoking revealed both in the Pamirs in the present study and in the Altai mountains was obviously performed during the burial and may represent a different kind of ritual, perhaps, for example, aimed at communicating with the divine or the deceased.

Or, perhaps they were just soothing their grief and celebrating the life of their lost loved one by putting a little weed on the fire rocks.