It’s time to talk about the fact that American doctors have a cannabis problem. And it’s harming their patients. I know because I’m one of them.

The latest evidence came yesterday from the Journal of the American Osteopathic Association, which published a study about the amount of sedation required for patients who are regular cannabis consumers.

In that study, researchers looked at 250 patients who underwent endoscopy procedures at a hospital in Grand Junction, CO. I’m assuming it was mostly men in their 50s getting colonoscopies, a routine cancer screening. The scientists found that regular cannabis consumers required more sedation than patients who did not consume. 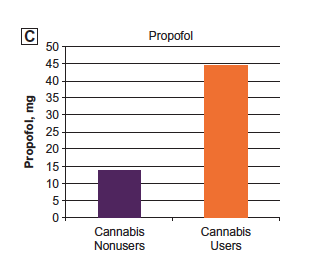 In the Grand Junction study, regular cannabis consumers required more than twice as much propofol as non-cannabis consumers. (Chart from Journal of the American Osteopathic Association, click on image for link.)

What does that mean? It’s simple. In a colonoscopy, a medical team puts the patient to sleep, then runs a tiny camera and some kind of polyp-removal device through the rear door to check out the condition of the digestive tract. As a patient, it’s a wonder of modern medicine. You go to sleep, and when you wake up the entire procedure is done.

Medical marijuana is legal in 34 states. And yet we still can't talk about it honestly with our doctors in the privacy of an exam room.

Anesthesiologists often use a mix of three drugs on colonoscopy patients: fentanyl, midazolam, and propofol. In the Grand Junction study, cannabis consumers required just a touch more fentanyl and midazolam—14% and 20% more, respectively. But when it came to the sleep-making anesthetic propofol, cannabis consumers needed a 220% dose—more than twice as much as non-cannabis consumers.

Here’s what you need to know about propofol: It’s the sleep drug that killed Michael Jackson.

Here’s what you need to know about colonoscopy patients: We’re not honest with our doctors about our cannabis use.

That’s a problem. And it’s not limited to colonoscopy patients.

Why can’t we talk about this?

Medical marijuana is now legal in 34 states. Adult-use cannabis is legal in 10 states, Washington, DC, and Guam. And yet many of us still can’t talk about it honestly with our doctors in the privacy of an examining room.

Even cancer patients have a hard time doing it. A 2017 study by researchers at a cancer center in Washington state found that 74% of cancer patients wanted information on medical marijuana from their doctors. Only 15% of those patients received it.

We see those patients’ frustration every day here at Leafly. They write to us seeking advice when their doctors can’t or won’t discuss medical cannabis—or shame the patient for even broaching the subject. It’s so common that when we run an article explaining how to obtain a medical marijuana card, we always include a caveat about general practitioners: Your family doctor may refuse to write a recommendation, or even talk about it. Why? Because they’re ignorant about cannabis and the subject makes them uncomfortable. Some may think they run a legal risk just by talking about it. (They don’t.)

I also live with that reality. I’m a resident of Washington state, where cannabis has been legal for all adults for more than six years. My family doctor is awesome. But I still can’t talk openly about cannabis with him. And I’m an editor at Leafly who literally wrote a book about cannabis.

I went in for a checkup last month. I wrote down a list of three things to discuss:

The knee thing was a tendon issue, no surgery required. The skin thing was nothing. We didn’t get to #3 on the list. We never do.

If we had, I’ve have told the doctor that since finding the right CBD:THC mix in a vape cartridge, I sip on it once or twice a week before bed. When I do, it helps me fall asleep and no longer wake up at 3 a.m. That’s the reason I haven’t renewed my Ambien prescription in three years. I’ll also burn a joint once in a while on a Friday night after a long week.

I want to tell my doctor: 'This isn’t a me problem, this is a you problem. I’m reluctant because you’re reluctant.'

I also hesitate because that time my doctor was out of town and I saw the clinic’s substitute doc, he asked me what I did for a living. I was honest and told him. “So you write about ‘medical marijuana’?” he said, in a tone that collapsed under the weight of disdain it carried. I hesitate because the nurse who checks me in asks me about cannabis “or any other drug use,” as if I’m mixing in a little meth and coke for fun. Within the walls of that clinic, cannabis use is still treated as shameful.

I also hesitate because if the doctor writes something in my chart about cannabis, I don’t know if I’ll be dealing with the repercussions for the rest of my life. Last month Leafly published an article about cannabis and organ donation. “Organ donors and recipients have traditionally not been selected if they use cannabis,” wrote Jacqueline Havelka. That’s right: recipients. So if your medical record says you’re a cannabis consumer, and suddenly you need a liver transplant, guess what? You’re fucked. All because you were honest with your doctor.

Can you donate or receive a kidney if you use cannabis?

It starts with your doctor

Changing this harmful dynamic requires a sea change in the attitude of the entire medical profession regarding cannabis. That change has to happen in medical school, in nursing school, in the way cannabis is discussed every day in a clinical setting. But it starts with each individual doctor. It starts with an establishment of trust around the issue. Put down the pad and tell me, your patient, “Let’s talk off the record about cannabis.”

Establish trust. Put down the pad and tell me, your patient, 'Let’s talk off the record about cannabis.'

The study published yesterday in the Journal of the American Osteopathic Association was conducted in Grand Junction, Colorado, during 2016 and 2017. The researchers chose Grand Junction for a reason. “Since the 2012 legalization of cannabis in Colorado, more patients use and disclose their use of cannabis,” they wrote. “With new openness about cannabis use, a question specifically addressing this issue was added to our hospital’s nursing preprocedure questions in January 2015.”

That assumption is alarming. Because the “new openness” simply isn’t true when it comes to a medical environment. And it may ultimately deliver inaccurate information that results in an incorrect dose of propofol.

I know because I’ve been that patient. Last month I went in for a routine colonoscopy at an endoscopy center in Washington state. They gave me the same mix of drugs outlined in the Grand Junction study. Everything went fine. But when a nurse went through the preprocedure checklist with me, she asked: “Any cannabis use?”