California has a troubling new wrinkle in the vaping story rocking the nation.

Acting on a tip, state officials raided a warehouse in Canoga Park and discovered an illegal manufacturing operation.

Prompted by a tip, investigators at the California Department of Consumer Affairs served a search warrant on Thursday, Oct. 3, at a light industrial space in northwest Los Angeles’ Canoga Park district.

There they found an illegal cannabis product manufacturing operation apparently operated by Kushy Punch, a legal state-licensed company. Authorities seized a number of finished products, including gummies in Kushy Punch packaging and 7,200 disposable vaporizers in Kushy Vape packaging with an estimated street value of $21 million. 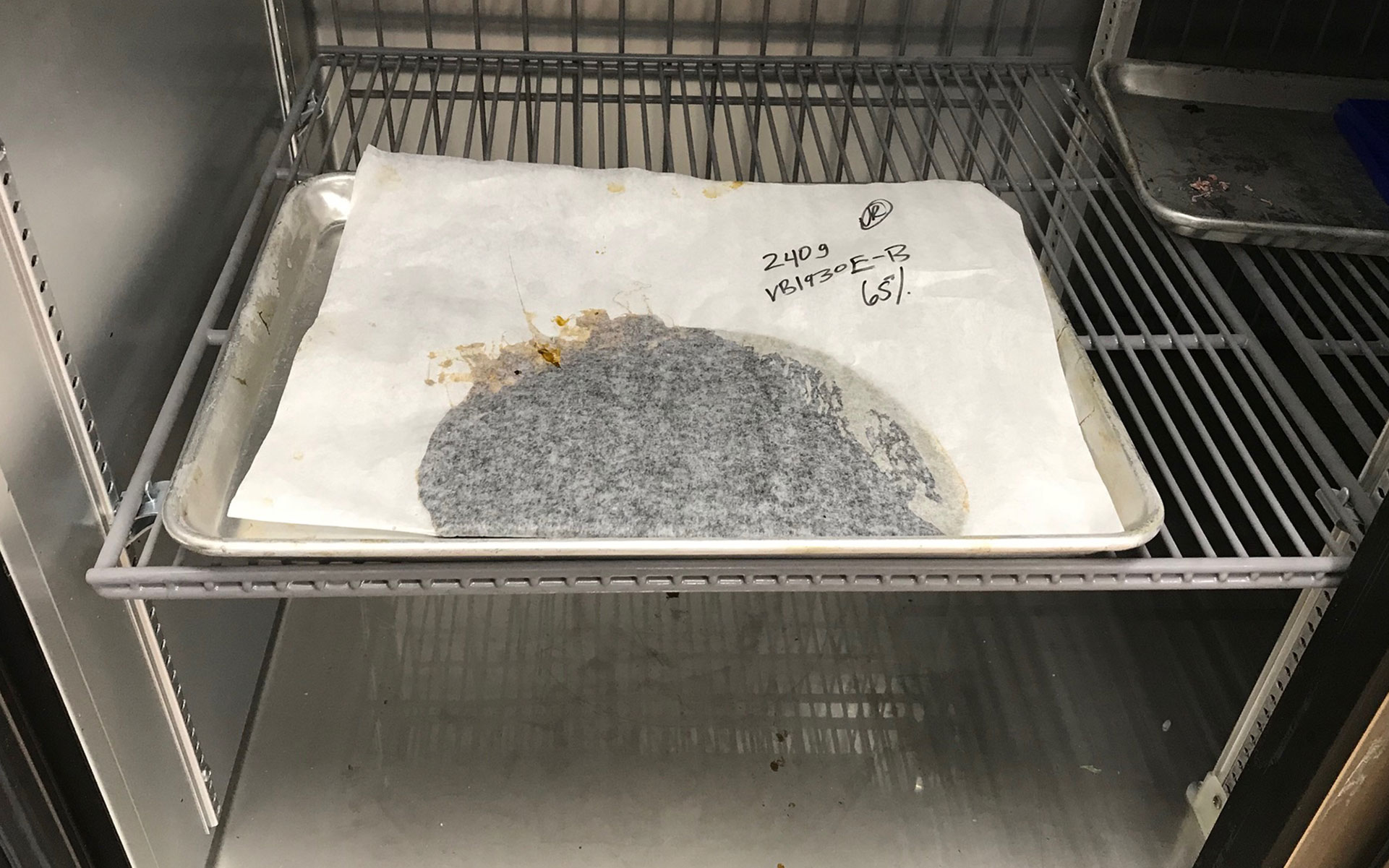 The San Fernando Valley facility appeared to be in the business of putting those extracts into professional-looking THC foods as well as disposable vape pen cartridges. Tall file cabinets held thousands of boxes of Kushy Vapes pens and Kushy Punch edibles packaged and ready for sale and consumption.

Kushy Punch’s lawyer provided a statement to Leafly on Oct. 8 confirming the facility and inventory belonged to Kushy Punch. But he denied distributing the products into the illicit market.

Undermining Kushy Punch’s position—gummies and CBD vapes labeled “Kushy Punch” are for sale in online marketplaces that list unlicensed stores as of Oct. 8.

A source familiar with Kushy Punch accused the adult-use licensee of maintaining two facilities: one licensed and one black market. (Leafly is granting the source’s request for anonymity because disclosing their personal information might endanger their own safety and the safety of others.)

A source close to Kushy Punch alleges the company maintained two facilities: one licensed and one black market.

The source alleges that cannabis that tested clean went through Kushy Punch’s licensed facility and into the licensed supply chain.

“This is where they have all black market operations going,” the source told Leafly. “They are using untested black market oil that is heavy in pesticide.”

Kushy Punch’s lawyer denied those assertions. “Kushy Punch has worked hard to successfully transition into the regulated market. All Kushy Punch products undergo stringent testing requirements to ensure product and consumer safety in compliance with all rules and regulations for licensed cannabis businesses in California.”

Kushy Punch’s licensed edibles are manufactured and distributed by Vertical Bliss Inc. of Northridge, a legal state cannabis licensee, according to documents posted on the KushyPunch.com website. 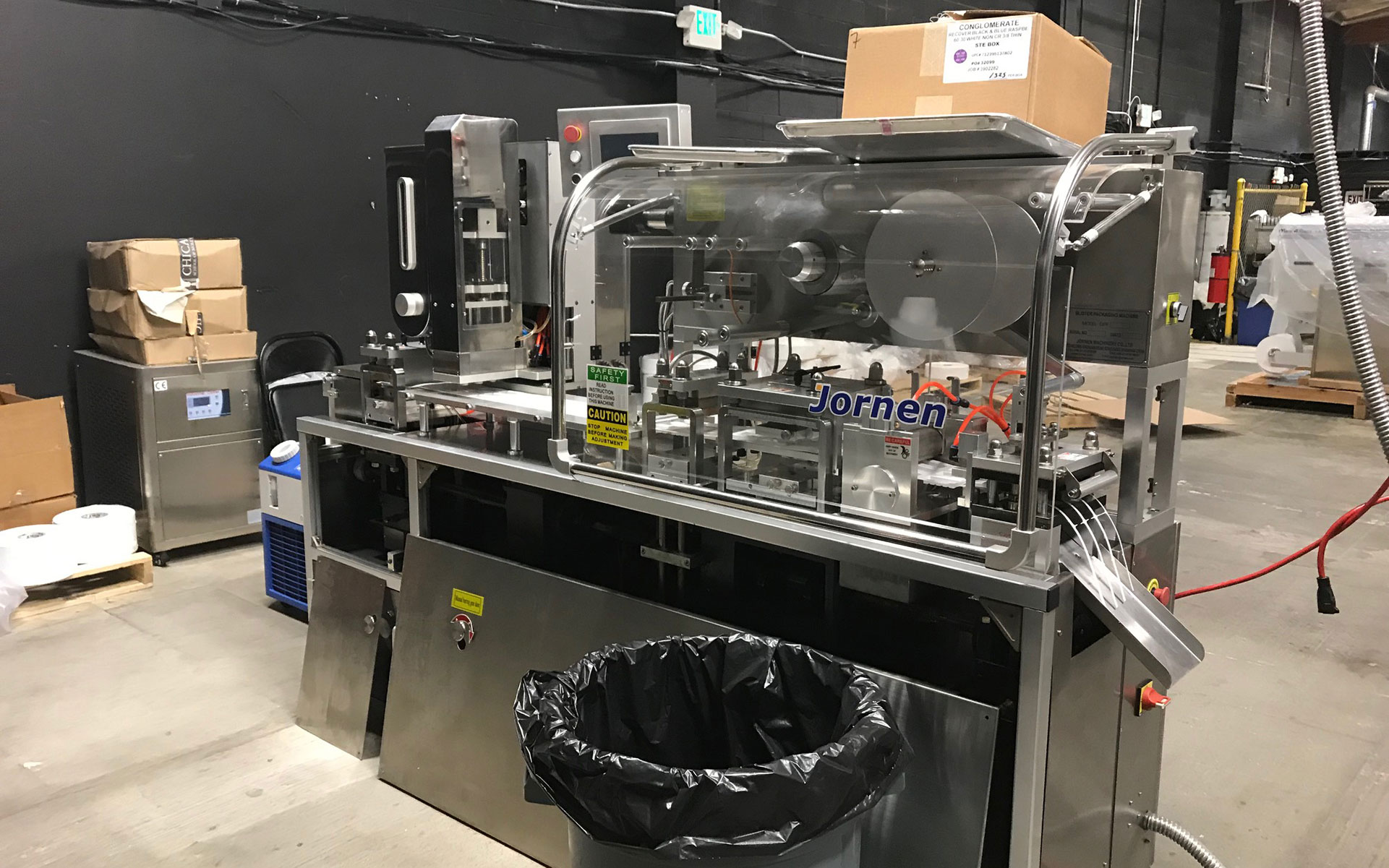 The BCC said its investigation has the same information, is testing the oil, and examining the possible links between the raided facility and the Kushy Punch brand, said BCC spokesperson Alex Traverso.

“If this is something we’re seeing linked back to someone who has a license I would be surprised if they had a license much longer,” Traverso added.

Kushy Punch’s lawyer said they will cooperate. “Kushy Punch takes the pending BCC allegations very seriously and intends to cooperate and work closely with the BCC in its efforts to protect consumers and license holders as the regulated cannabis industry continues to develop.”

Leafly’s source alleged that Kushy Punch management split the legal business from the illegal one when the company obtained a state cannabis manufacturing license. The source said Kushy Punch managers assigned the same staff members to work both the legal and illegal facility.

The company’s website also states that Kushy Punch is selling its products into both markets.

But it also states that it manufactures edibles and vape products for “California collectives and clinics for California medical card holders.” Commercial medical collectives became illegal on Jan. 1, 2019. All retail sales must go through a state-licensed adult-use or medical retailer. Licensed cannabis retailers must only carry products from licensed cannabis manufacturers. 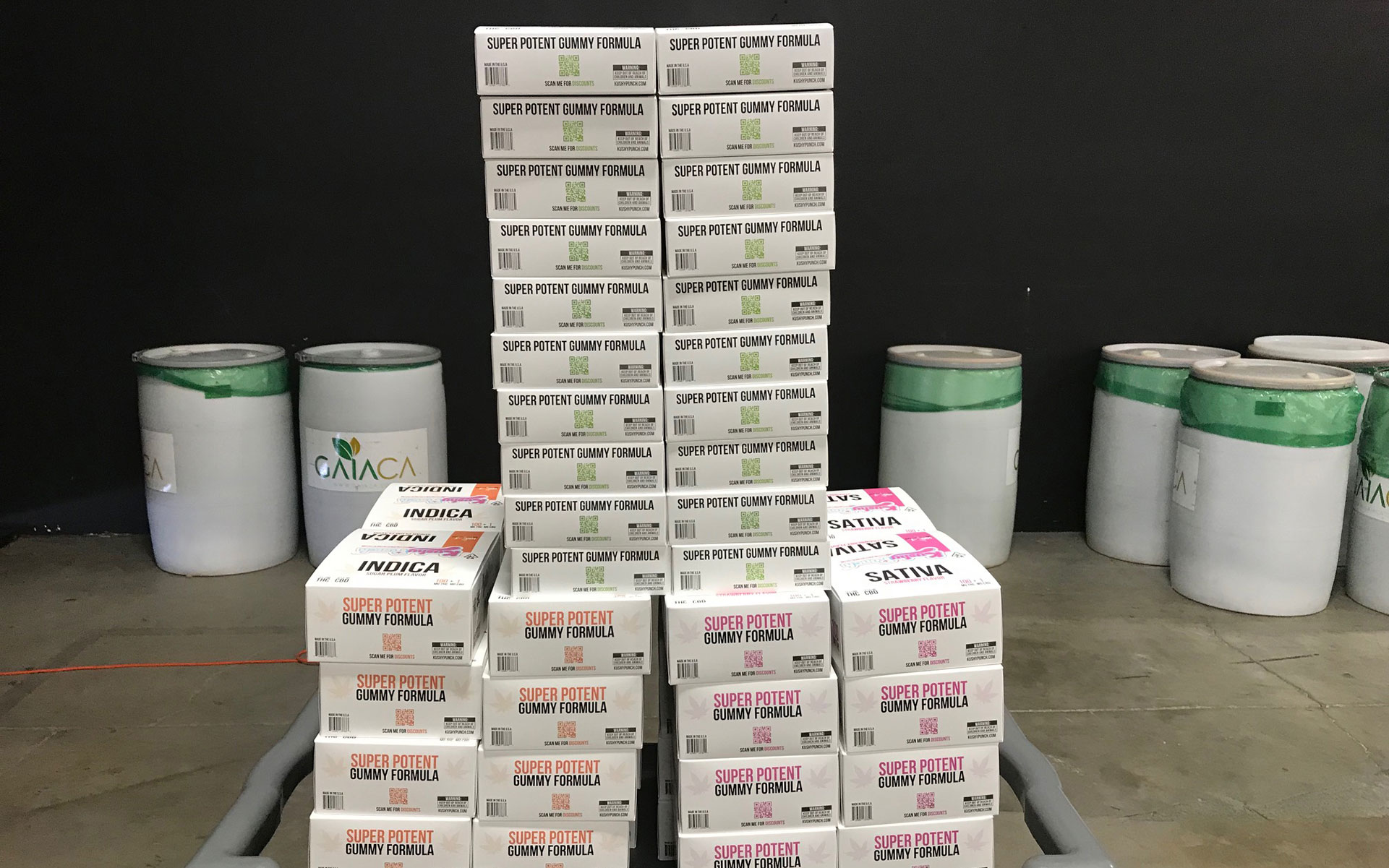 At least 1,080 people in 48 states have a confirmed or probable vaping-associated pulmonary injury. As many as 20 people have died from VAPI, according to investigators at the Center for Disease Control. Doctors said 17 victims in Wisconsin had what’s called chemical pneumonitis—akin to a chemical burn on their lungs.

One of the main suspects in the VAPI outbreak continues to be illicit THC vape carts contaminated with toxins.

One of the main suspects in the VAPI outbreak continues to be illicit THC vape carts contaminated with one or more toxic chemicals. Known toxic chemical contaminants in so-called ‘fart carts’ sold on the street and capable of causing chemical pneumonitis include: diluent thickener tocopheryl-acetate (vitamin E oil); the pesticide myclobutanil; and solvents like butane.

“The administration is really prioritizing these complaints because of the public safety aspects of that,” the BCC’s Traverso told Leafly.

Based on a tip, the BCC raided a vape shop in Fresno on Set. 25 and confiscated roughly 2,200 street market “Dank Vapes” carts and packaging for 4,400 more. Many VAPI victims have reported using Dank Vapes carts.

The BCC aims to shut down more illicit pen factories, rather than chasing down the product at their end-point—street dealers, pop-up markets, unlicensed cannabis retailers and couriers, and smoke and vape shops selling them under the counter.

“It’s not enough to just go after the retailers and shut those places down,” Traverso said. “We’re making an effort to go after the big fish.”

Industry experts suspect more than one licensed California cannabis manufacturer may be selling into the illicit market.

Why take the risk? Experts familiar with California’s cannabis industry say the extra cash generated by a street-market operation might raise enough money to keep a company afloat as it makes the costly transition to become licensed and compliant with state regulations. The illicit market is three to five times bigger in California than the licensed market. Just 450 or so stores and couriers exist for a state of 38 million people, due to local licensing bans and delays.

“It’s a law of averages. There’s bound to be a few” licensed companies also operating outside the law, said Sean Donahoe, an industry expert and central California-based consultant. “Generally speaking, we’ve got thousands and thousands of licensees. Combine human nature and statistical averages and it’s just a matter of time before one regulated operator chooses to cross over and compete with themselves in the unregulated space.”

Quoting the film Casablanca, he said, “I would not be ‘Shocked, shocked that there’s gambling—or bootlegging—going on in this establishment.’” 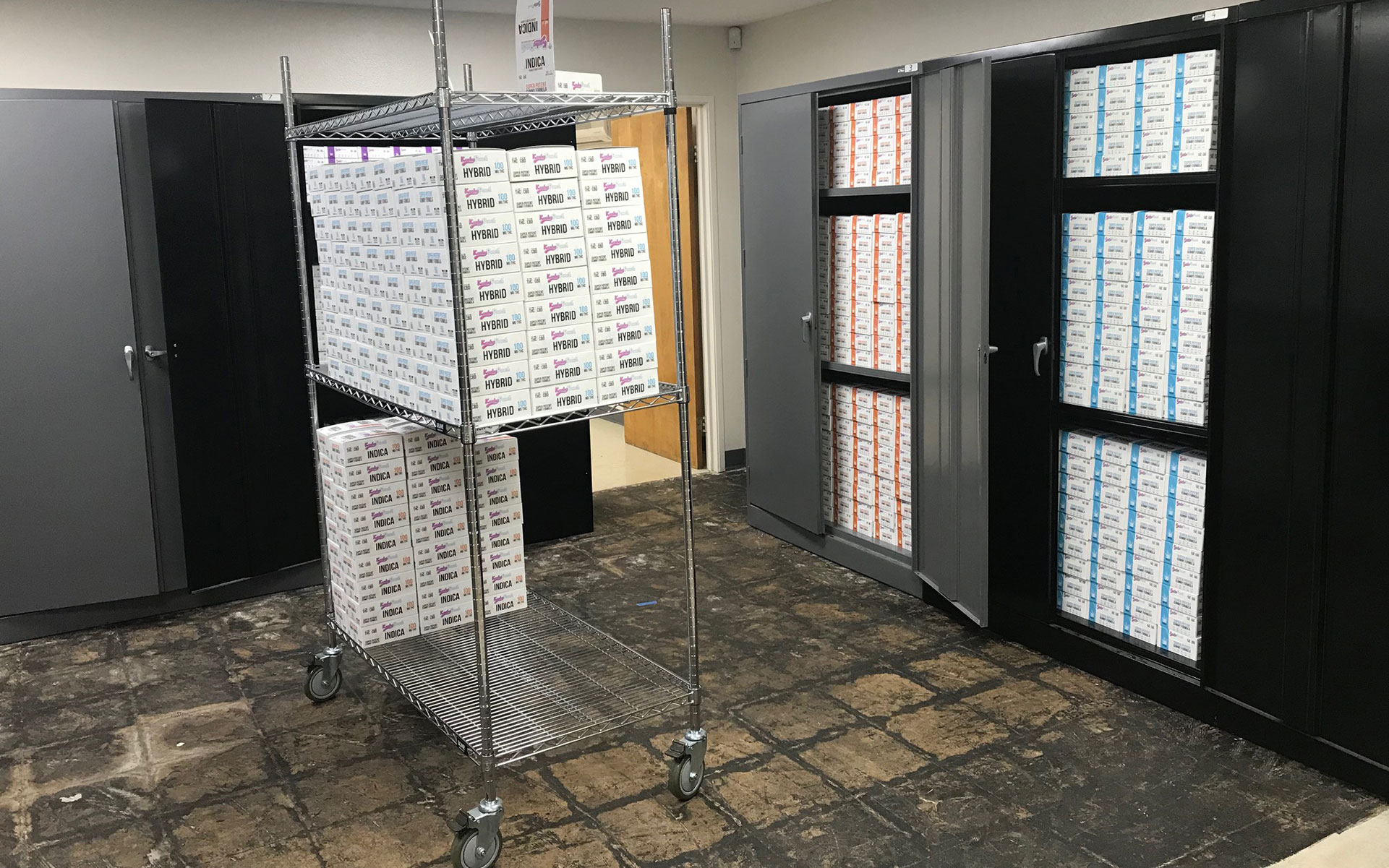 Licensed operators might also cheat in order to offload THC products that are too dirty for the state’s toughest-in-the-world purity standards.

Over the past 21 months, California’s licensed cannabis labs have quarantined nearly 6,000 product batches that failed to meet these tough standards. Most of the products had labeling issues (the potency of the product did not match the potency promised on the label), but batches also failed tests for pesticides, heavy metals, residual solvent, and microbes. And those are just the dirty batches sent to labs for testing.

Licensees can perform private “research and development” lab testing to isolate dirty cannabis before it’s sent down the supply chain. Operators are supposed to destroy dirty stock, but California’s statewide track-and-trace system has yet to get up and running—and may still be months away. Without that system, it’s easy to divert tainted cannabis.

Vape industry expert Peter Hackett, founder of the law-abiding California company AirVapor, explains the logic of selling out the back door. If a licensed company fails R&D lab testing on 30,000 vape carts at $50 retail each, do they just throw away $1.5 million?

“Hell no,” says Hackett. “That’s going to get redirected into the underground black market network.”

California NORML co-director Ellen Komp also said she heard one rumor recently of an operator selling out the back door in Southern California.

“This reportedly started happening at the time when California pesticide regulations kicked in,” said Komp. “I suppose it stands to reason that not everyone might have destroyed all their expensive products.”

You can file a complaint at the BCC’s File a Complaint web page.

“We rely on tips and complaints and definitely follow up on everyone. We don’t always see and hear everything or have the ability to have inside knowledge,” said the BCC’s Traverso. “We’re really encouraged by how we were able to quickly follow up on this complaint and get these products off the street.”

On Nov. 21, the BCC revoked the license of Vertical Bliss, Inc. aka Kushy Punch, for ties to the unlicensed facility.

The BCC and CDPH announced today that they have revoked the state commercial #cannabis licenses issued to Vertical Bliss, Inc., also known as Kushy Punch, located at 20500 Nordhoff Street in Chatsworth, CA.

“[The More Agency, Inc.] is saddened by the license revocation of its manufacturing and distribution partner … [and] is working diligently to identify licensed partners who will continue to provide [the product].”

Industry
Find Harvest House of Cannabis marijuana in Arizona
Industry
New company of cannabis pioneer seeks to unlock the endocannabinoid system
Industry
How is a cannabis pill made? Its journey from seed to capsule
Industry
Las Vegas cannabis stores are reopening. Here's what it looks like