Hezekiah Allen is the executive director of the California Growers Association, which consists of more than 1,200 cannabis growers and business owners. Leafly welcomes op-ed contributions from industry and political leaders on a range of topics related to cannabis.

Let’s get some clarity on this issue: big cannabis. Some leaders in our community think this is “noise.” Most see it as a critical component of a discussion about our future—a future that we are building with intention and a future that deserves honest, clear, and transparent dialog.

Big isn’t inherently bad. Small isn’t inherently good. But both can be—and often are—self-interested. When a business becomes big enough, amasses enough resources, and/or enjoys enough of a regulatory advantage to bend public policy to its interests, there is a problem. And that is exactly the problem we are observing now.

When small businesses work together to shape public policy, there is an intrinsic element of “the greater good” embedded in their work, because their interests reflect shared goals and common ground. Small businesses—small farms particularly—provide an irreplaceable cultural and economic value to our community.

Emerging From the Shadows

For more than a decade, most businesses in the cannabis industry in California have had little opportunity to come out of the shadows. A policy vacuum at the state level left most localities with few good options. Many cities and counties chose to put their heads in the sand, deferring to local law enforcement. This left most businesses in hiding, unable to engage with policymakers, and unable to build businesses and brands.

As we emerge from more than a century of cannabis criminalization in California, it is wise and prudent to take our time.

In the midst of this environment, a few municipalities moved forward and adopted local medical cannabis regulations. As a result, a handful of businesses in those cities got a head start. They were able to build their businesses while thousands of others around the state were left behind. This phenomenon most severely impacted the marginal and criminalized communities where cannabis commerce was most present.

So, as we emerge from more than a century of cannabis criminalization in California, it is wise and prudent to take our time. We won’t miss the opportunity to scale up just because we take a few years to get there. On the other hand, if we allow a finite, inelastic marketplace to be dominated by a few large players and close the door to others, we may lose the opportunity to establish a diverse marketplace, built around small and mid-sized businesses, that has the capacity to restore social and economic justice to our communities.

A Long Road to Normalization

Cannabis consumers deserve the same choices as grocery shoppers, and California’s cannabis growers deserve the same opportunities as the state’s food producers. And yet they don’t. Where are the consumer champions calling for cannabis growers to have access to the privileges afforded to all other growers in the state through the Direct Marketing Act, which allows customers to buy directly from producers?

Concerned about the price of cannabis? Ask your retailer what markup they are taking. Many California retailers state are striving to keep markups and prices reasonable. Others are not. Our experience as growers is that the big retailers are typically not the ones seeking to be balanced and fair. We have talked a lot about craft growers; it is probably time we start talking about small-scale retailers, cottage food makers, and all the other small businesses that have been excluded from the regulated market for years.

Why do some cannabis retailers take a 100% (or more) markup when other, similar industries are closer to 30% or 40%? Because they can. California’s cannabis marketplace is one in which too few businesses control access to consumers. We lack the competitive forces that keep a market honest.

In the past 15 years, the wholesale price of cannabis flower (the price growers are getting) has decreased, first in half, then in half again. Meanwhile, the price to the consumer has remained relatively static. Where is the surplus revenue going? To the “keystone markup” that many retailers are taking—and, ultimately to the big-budget lobbying and PR efforts that are now seeking to shape public policy and public opinion to serve a few retailers’ own interests.

If you are concerned about cost to the consumer, we should create policies that protect against price gouging. Perhaps folks concerned about massive price increases would support a surplus markup tax? After all, if it’s price to the consumer that matters most, we all share an interest in ensuring reasonable, fair markups. Right?

Or, better yet, let’s support policies that would allow small farmers to market their products directly. Cut out a few steps in the supply chain, and California can have both low prices and small farms. This is the most direct way to ensure consumers have access to high quality products and fair prices.

The High Cost of Low Prices

While everybody would like to be able to afford heirloom tomatoes, meticulously tended in small patches and selling for $5.99 a pound, many families can’t afford them.

Many shoppers can only afford the lower-priced tomatoes grown by larger, more efficient farms that pay workers less; rely on unsustainable use of natural resources, synthetic fertilizers, and toxic pest management; and consolidate even more wealth in the hands of a select few.

Rather than crashing our economy so a few people can get wealthy, let’s rebuild it so everyone can afford healthy, high-quality produce.

A small handful of well capitalized, well positioned businesses will work to protect the comfortable position that regulatory advantage has provided them.

Giving California’s cannabis farmers a transition period of five years by enforcing regulations that protect against industrial-scale agriculture will maximize choice and competition. It may inflate wholesale prices—but that is uncertain. Regardless of wholesale pricing, the facts in the market tell us that the price to consumers will still be largely determined by retail markups.

That five-year transition was clearly spelled out in Proposition 64, which California voters passed in November 2016. But a few weeks ago that phasing-in period was effectively eliminated by regulators in Sacramento.

The need for healthy competition among California cannabis cultivators is clearer than ever. That is why it is critical to ensure that as many of those cultivators as possible have an opportunity to transition to a regulated system—rather than hand the market over to the well positioned few who happen to control market access.

Keep in mind, “healthy competition” does not mean a free-for-all. Imagine the difference between a civilized sporting match and a ruthless bloodsport. The difference? Rules.

The bottom line is this: There are a small handful of well capitalized, well positioned businesses that have benefited tremendously from a controlled, inequitable market during the last decade. They will work to protect the comfortable position that regulatory advantage has provided them.

California has one chance to get this right. In order to build the cannabis marketplace that so many activists, business owners, and consumers have long envisioned, we need to do two things. First, the state needs to implement the law as the voters passed it, with the five-year transition period included. Second, we need to keep pushing for policy reform so that cannabis consumers and growers have all the opportunities that are afforded to consumers and producers of other crops.

It is time we open up the market, reduce barriers to entry, disrupt the regulatory advantage enjoyed by a few, create opportunity for as many entrepreneurs as possible, and work to reform federal and global policies so that cannabis consumers can enjoy the same choices as everyone else. Then we can let the market decide. 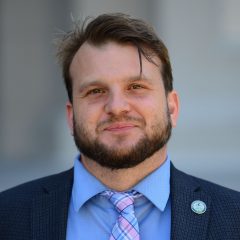 Hezekiah Allen is the executive director of the California Growers Association, which consists of more than 1,200 cannabis growers and business owners. Born and raised in rural Humboldt County, he works to protect the interests of the state’s cannabis cultivators and other small and mid-sized businesses.