Lindsey BartlettSeptember 7, 2016
Share
Share on Twitter   Share on Facebook
Print
In just a few short years, Pueblo County has become the cannabis growing capital of Colorado. Since 2013, Pueblo has approved nearly 200 cannabis licenses, three million acres of commercial hemp farms, and two to three million more acres of cannabis greenhouses. Most of these farms are raising sun-grown cannabis, unlike Denver, the state’s other grow center, where cannabis is strictly an indoor product. But now a group of cannabis critics wants to shut the industry down entirely in Pueblo County. And they’re taking their case to the voters in November.

Adult-use cannabis is the target. A handful of Pueblo County businesses wouldn’t be affected by the initiative, including industrial hemp farmers, home cannabis growers, and medical marijuana shops.

The group sponsoring the initiative, Citizens for a Healthy Pueblo (CHP), qualified the measure for the ballot with signatures from just over 5% of the town’s population. CHP chair Charlene Graham has a lifetime of law enforcement under her belt–35 years in the Pueblo Police Department, working her way up from meter maid to retire as a Deputy Chief in 2004. When Leafly reached out to Graham for comment, she declined. Shortly thereafter Graham sent a message to others backing Prop 200: 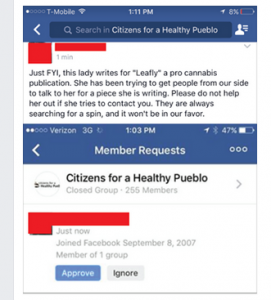 CHP explains their stance against retail cannabis on their website: “So why are they afraid of bringing this to a vote? Because WE THE PEOPLE know how devastating pot has been and they know we’ll vote it out.”

“Here in Pueblo, we’ve had an influx of a lot of homeless people that have come into the community looking to get a job in the community or looking to smoke dope,” Pueblo Police Chief Luis Velez told the Pueblo Chieftan. “They’ve caused an enormous weight on the social fabric within the city, and so much so that I think that fabric is going to tear. There’s not enough funding to take care of all of these people.”

Opposing the bill is Growing Pueblo’s Future, an industry-led group made up of 183 cannabis licensees. They began working to stop Prop 200 in early June. “We’re a volunteer group with upwards of 125 people,” said Jim Parco, the group’s leader. Parco is the founder of Mesa Organics, a retail cannabis store on Highway 50 near the Pueblo Airport. “It’s not like we have ten people running this; it’s a grass roots efforts and a passionate group of people. Everyone is entitled to their own opinion, but you’re not entitled to your own facts. We focus on the facts on how cannabis improves our community.”

A military veteran and an economics professor at Colorado College, Parco is the pop of a quintessential mom and pop shop. Mesa Organics opened in February of this year and is located on his family farm. “This spot has been in our family for 100 years,” he told Leafly. “When my wife and I left the military and moved back to Pueblo, we decided we wanted to help the economy because it was legal.” Proposition 200 is concerning, he said, “because we would have to close our doors and let all our people go.” 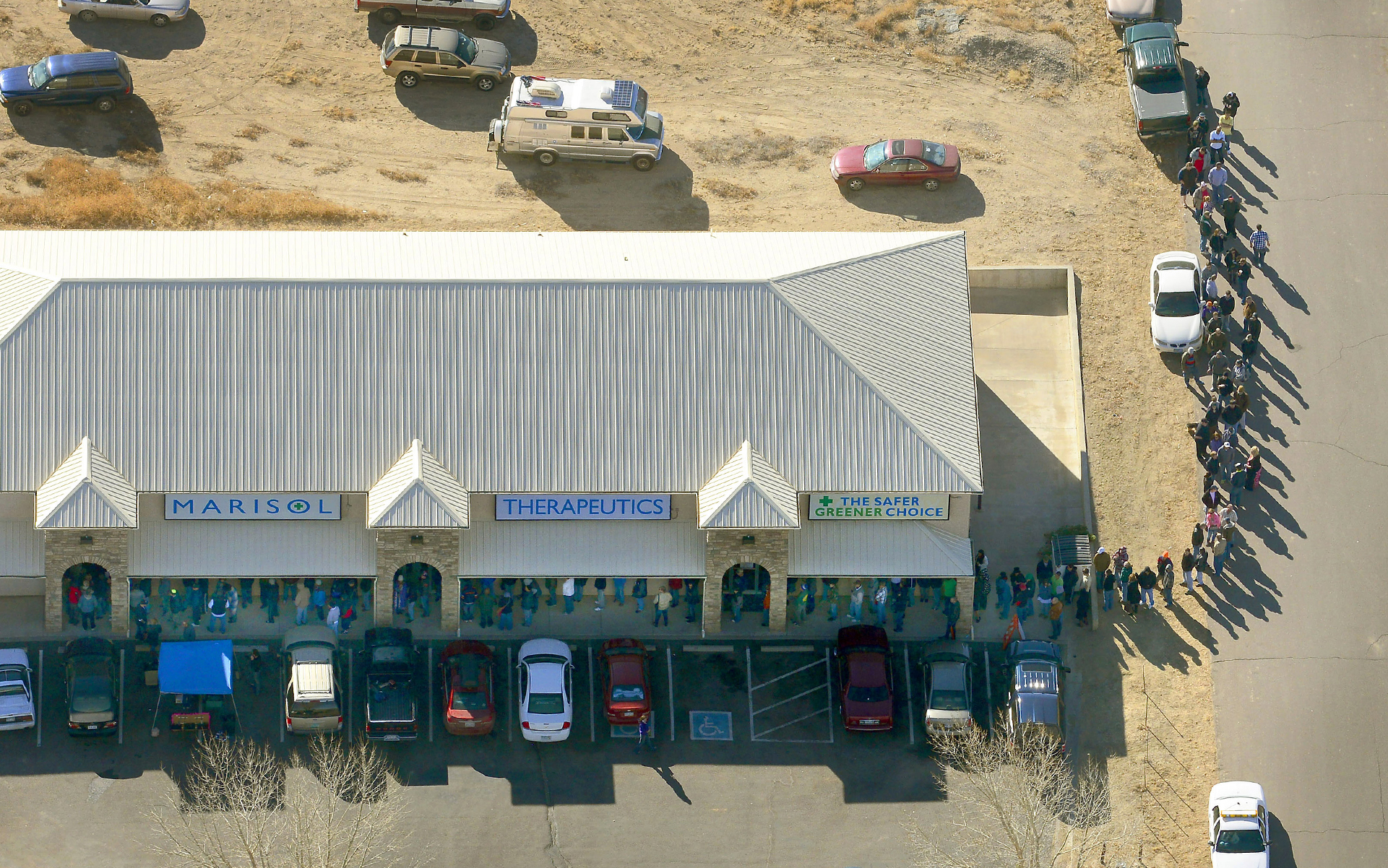 The Pueblo area struggled economically for decades before the coming of cannabis legalization. Pueblo was once known as a thriving steel town, but the closure of the last foundry in the 1970s devastated the region.

When Colorado’s Initiative 64 passed in 2012, it allowed counties and municipalities to opt into the cannabis growing and retail industry. Since then, 22 out of the state’s 64 counties have proceeded with adult use legalization of some sort. In Pueblo, 65 percent of voters embraced Initiative 64. That led the city council to opt into the legalized industry.

And that industry has boomed here. Many attribute the “green rush” to the yearly 250-plus days of sunshine the county receives, as well as a low cost of living, which is ten percent cheaper than the U.S. average. 41% of the county’s new commercial building permits are directly associated with the cannabis industry. Cannabis has created 1,300 jobs that didn’t previously exist here. The industry is bringing in approximately $3.5 million dollars in annual retail tax revenue.

In the past two years, that tax revenue has gone to high-profile programs around the county. The Colorado State Fair has received $800,000. More than $3 million went to complete the County High School construction project, and $900,000 was allocated to fund CSU-Pueblo’s cannabis studies programs. General fund expenditures of marijuana taxes also sent an additional $350,000 annually to Pueblo for things like road maintenance, middle school drug prevention and more.

“If 200 were to pass, marijuana would still be here. But they’d get rid of the jobs, tax revenue and in my opinion, open up the black market again.”
Jim Parco, Growing Pueblo's Future

If all of this goes away, what happens to Pueblo?

“It’s nerve-racking to think we may lose our first position” said Jim Parco. “We were the first to open stores, open cultivation and licensing. Pueblo would be losing out on all these economic benefits. Marijuana is not going away. It’s still going to be in the community. Why would you want to get rid of the highly regulated ordinances?”

“It worries me less on a personal level and more on a community level.” Parco is a science-minded dispensary owner in a lab coat who operates under meticulous MED regulations. It is a role he keeps entirely separate from his job as an economics professor. “It boils down to who’s able to represent the facts to the community best. We are sticking to the facts. The fact is that we created so many jobs, there’s revenue coming into the community and businesses that rely on the backs of this industry.”

“We are a more social economic community, were working class. We’re always looking for ways to improve our community. If 200 were to pass, marijuana would still be here. But they’d get rid of the jobs, tax revenue and in my opinion, open up the black market again.”

The passing of Prop 200 would have a profound impact on the town, but would affect the national legalization movement? “If Prop 200 passes in Colorado, this could be an opt-out strategy that starts happening everywhere else,” warned Parco. “If it fails here, it’ll be pretty clear evidence that the community understands how positive cannabis is.”

Denver writer and photographer Lindsey Bartlett is an editor at Westword and 303 Magazine, as well as a regular contributor to Leafly.