David BienenstockMay 27, 2020
Share
Share on Twitter   Share on Facebook
Print
Oregon grows six times as much marijuana as the state can consume—because it grows so well there, as illustrated by this outdoor grow near Ashland. Why not ship it to states with more consumers? Because it's technically illegal. For now. (just.b photography via AdobeStock)

Oregon farmers grow a lot more cannabis than Oregonians consume, and what happens to the excess depends entirely on what kind of grower you happen to be.

In the legal market, licensed companies are currently sitting on a surplus of roughly one million pounds, enough to keep the state stoned at current levels for six years. Meanwhile, Oregon’s illicit growers just keep doing what they’ve always done, supplying unlicensed cannabis to appreciative consumers in states where a combination of restrictive laws and poor climate make for a net cannabis deficit.

A 2018 regional cannabis summit created a template that East Coast governors used in the COVID-19 pandemic.

Given those dynamics, it’s no surprise that lawmakers in Oregon have been at the forefront of national efforts to give legal producers a way to export out of state.

In June 2019, Gov. Kate Brown signed legislation that would allow Oregon to make agreements with other states to import and export legal cannabis, but only if federal law changes to expressly permit the practice. Oregon Sen. Ron Wyden and Rep. Earl Blumenauer followed up by introducing the State Cannabis Commerce Act, which would do just that.

Nearly a year later, however, that federal legislation has attracted little direct support in Congress. The overall effort remains entirely symbolic. That’s spurred some within the cannabis industry to start asking if the issue should be forced—if moving forward with interstate cannabis commerce without a direct federal sign-off might be a risky but necessary next step.

With federal progress stalled, is it time to push the boundaries?

“We now know that federal progress is going to be stalled by the next presidential administration, whoever wins,” DeAngelo tells Leafly. “So I believe the best way to put pressure on them and create real progress is by saying, “Look, if you aren’t going to legalize at the federal level, then we’re going to do an end run around you among the states.”

DeAngelo points to interstate compacts, agreements between two or more states to jointly regulate an issue, as the likely legal path forward. Examples include the New York—New Jersey Port Authority Compact covering transportation between the two states, and interstate compact agreements that allow people to move to another state while on parole.

A risky roll of the dice

Despite all the state-level reform of the past 25 years, cannabis remains fully illegal at the federal level. And neither Donald Trump nor Joe Biden, the presumptive presidential party nominees, currently plan to change that.

'The big risk is if the feds do get involved, where do they stop? Do they shut down everybody who took the risk?'
John Hudak, Policy tk tk, Brookings Institute

That fact has led John Hudak, author of Marijuana: A Short History and a senior fellow in governance studies at the Brookings Institution, to warn that if two or more states do move to open their markets to each other without at least tacit federal approval, they would be undertaking a risky roll of the dice.

“It’s a good conversation to have, but a tough proposition to actually undertake,” Hudak tells Leafly. “Right now states have been fairly effective at tiptoeing around the kinds of things that would really irritate the Department of Justice. So you can poke the bear if you want, but the big risk is if the feds do get actively involved, where do they stop? Do they just simply shut down the interstate commerce, or do they shut down all the businesses that engaged. They would have the right to do either.”

On the other hand, risk is also how we got here.

“It was an extraordinary risk for Colorado and Washington to become the first states to implement adult use legalization,” Hudak says. “The governors of those states really didn’t know what was going to happen.” 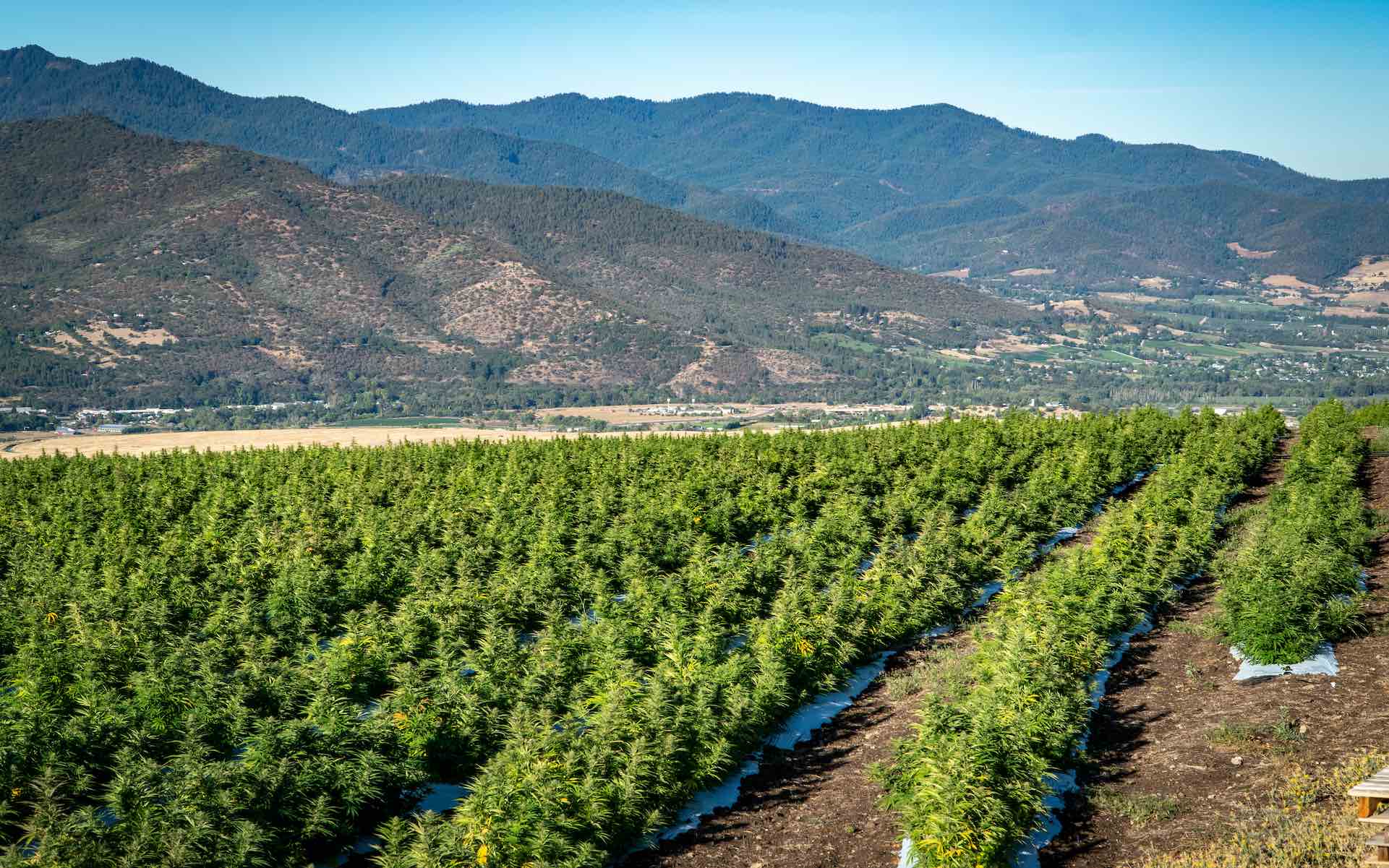 In 2019, Oregon had more than one million pounds of harvested cannabis sitting in storage. There are a lot of states that could use that product, but legally the crop can’t be shipped across state lines. (Just.b Photography via AdobeStock)

An existing interstate framework in the East

When the governors of New York, New Jersey, Pennsylvania, Connecticut and Rhode Island (all of which are looking to legalize in the near future) met in October 2018 for a regional “cannabis summit,” interstate commerce was not on the agenda. According to a jointly issued press release, though, the states did all agree “to a series of principles to setting a cannabis tax structure, as well as best practices to ensure that disproportionally impacted communities from the war on drugs have access to the new industry.”

Those meetings also had an unexpected but important benefit, according to New York Governor Andrew Cuomo. He credited the regional marijuana summit with creating a framework the states later adopted when seeking to coordinate their response to the coronavirus.

After calling such coordination “very hard to do,” Cuomo told a press conference that the cannabis summit “set a template where our regional states work together.”

A Western Alliance forms over COVID-19

There’s also now a Western Alliance of US states that’s similarly coordinating coronavirus response, and it includes the biggest legal cannabis markets in the country—California, Oregon, Washington, Colorado and Nevada.

Andrew Freedman, who was the State of Colorado’s first director of cannabis coordination, believes that if these large, relatively progressive states manage to codify a set of regional regulations they could potentially set off a “race to the top” by setting a standard the rest of the country would have to follow. Particularly if and when federal legalization brings a measure of national standardization to an industry that’s thus far been governed by a patchwork of state and local laws.

Hudak, however, is not so sure.

“I think it’s a little pollyannish to assume that something the states choose to do will prevent the federal government from taking a significant role in setting the rules whenever they choose to get involved,” he says. “States are going to do what they want now but that’s not going to forestall the feds from coming in and setting new ground rules eventually, rules that some states will be largely in compliance with while others will have to make significant changes.”

Of course, not everybody in the industry would welcome interstate commerce, at least not at this juncture. If you just spent millions of dollars to open a cannabis cultivation facility in a state with few producers, strict regulations and high prices, do you really want to start competing against Oregon’s six-year surplus of cannabis, which was grown at a far lower price point than your own product?

Crazy notion: Transport cannabis from Oregon, where it's grown, to New Jersey, where it's purchased.

Also, through economies of scale, increased lobbying power, and the ability to buy out competitors and market share, interstate commerce would give larger and better-funded companies distinct advantages over smaller businesses, which already struggle to compete in the current system.

But what if that dynamic was flipped on its head, by allowing social-equity businesses in states like New York and New Jersey the opportunity to stock their shelves with products from out-of-state craft growers? Such a move might give those retailers a significant competitive advantage in terms of price, selection, and quality, while also helping to relieve over-production on the West Coast.

“That would alter the entire economic structure of the cannabis industry,” according to Jason Ortiz, president of the Minority Cannabis Business Association (MCBA). “This concept promises economic justice at a much more significant scale than anything we’re currently discussing at the state level.”

Ortiz made that statement last year to Adam J. Smith, head of Our Craft Future, which was integral in pushing for Oregon’s early adoption of interstate commerce legislation. The concept of linking the fortunes of craft growers and equity business owners has been gaining traction ever since, even gaining the backing of the National Cannabis Industry Association.

While the path forward for interstate cannabis remains unclear and complex for both industry and lawmakers, according to DeAngelo there are clear winners every time the overall market expands: consumers and medical cannabis patients.

Given the health, economic, and social justice considerations involved, that’s whose interests should be at the forefront of these policy decisions.

“Some people in the industry may have trouble identifying a benefit with interstate commerce,” DeAngelo says, “but it’s something that every consumer should understand will lead to increased competition in the industry, which will in turn lead to higher quality products at lower prices. That’s the main reason to do this, because a truly sane and humane cannabis policy in this country would be designed to transition people away from pharmaceuticals and alcohol, towards the safer and more socially responsible choice of cannabis.”

Industry
Find Harvest House of Cannabis marijuana in Arizona
Industry
New company of cannabis pioneer seeks to unlock the endocannabinoid system
Industry
How is a cannabis pill made? Its journey from seed to capsule
Industry
Las Vegas cannabis stores are reopening. Here's what it looks like
Sign up for more Leafly news
Thank you for subscribing!