Joel and Jessica Guerrero: Caught in the Trap 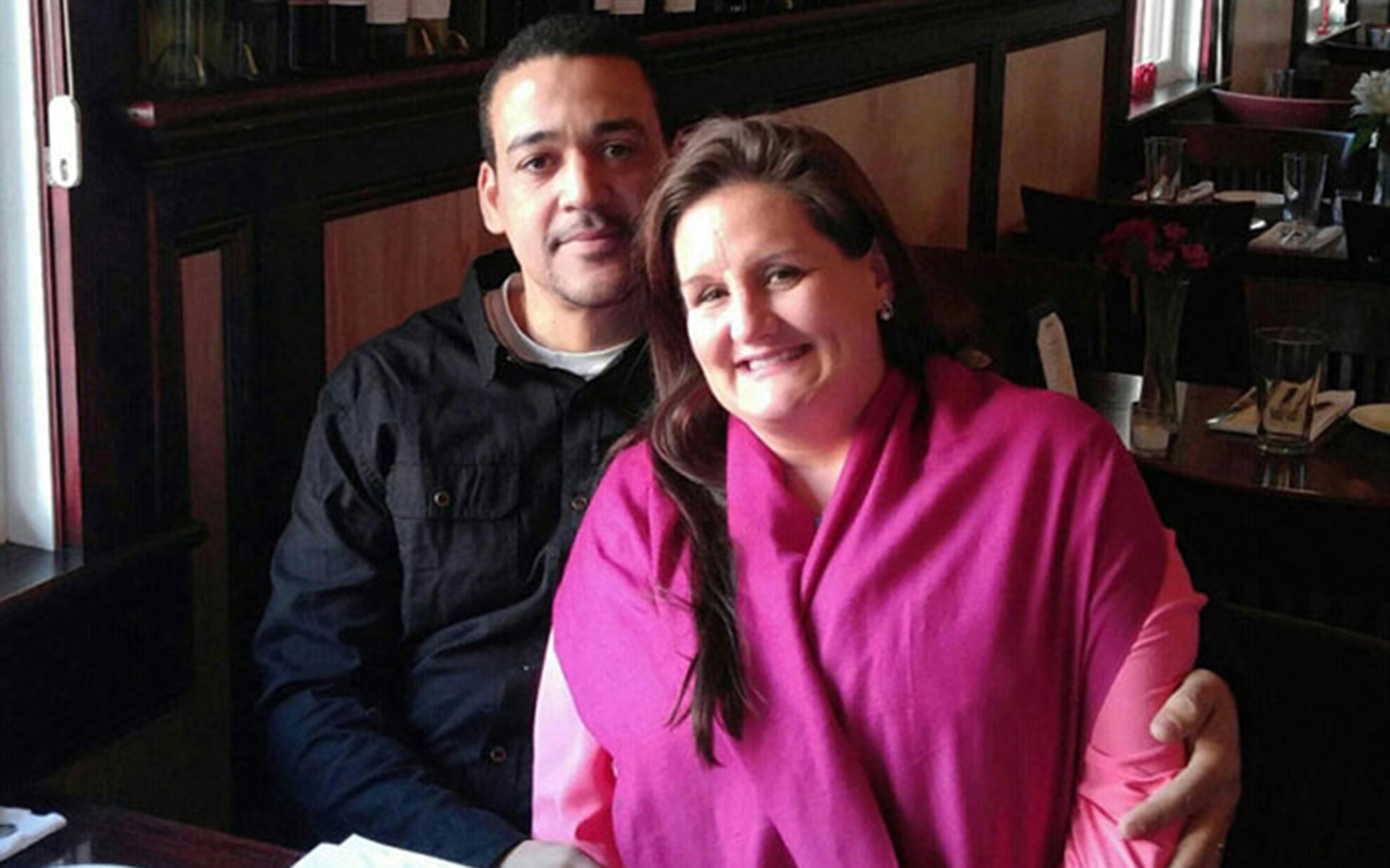 Joel and Jessica Guerrero: Everything was fine until the new immigration rules came down. Then Joel’s decade-old cannabis misdemeanor led to his arrest. (Photo from GoFundMe)

Guerrero, a 37 year-old newlywed and expectant father, immigrated legally to the United States 20 years ago when he was 17. He was arrested at a routine ICE check-in at the New York City Immigration Court in downtown Manhattan on February 28. Guerrero is currently being held at the Hudson County Correctional Facility, according to ICE inmate records, where he’s slated for deportation.

Joel Guerrero has a minor cannabis charge dating to 2004. It was never a problem until last month.

The reason? Guerrero has a minor cannabis charge dating from 2004. Since January 2017 almost 40,000 immigrants  have been deported, many of them for minor infractions. Trump removed an Obama-era rule forcing ICE to focus on serious criminals, giving border patrol agents more power to make arrests and deportations based on minor infractions.

The details of Guerrero’s case are disputed. In a statement to Gothamist, Rachael Yong Low, a spokesperson for ICE, said that Guerrero has a “felony conviction with intent to manufacture, sell or deliver…marijuana or a synthetic equivalent.”

But Joel Guerrero’s wife, Jessica, challenged this account in a phone interview with Leafly. “Either they’re lying or they’re misinformed,” she said, her voice rising. “And either way, that’s really scary for our country.” 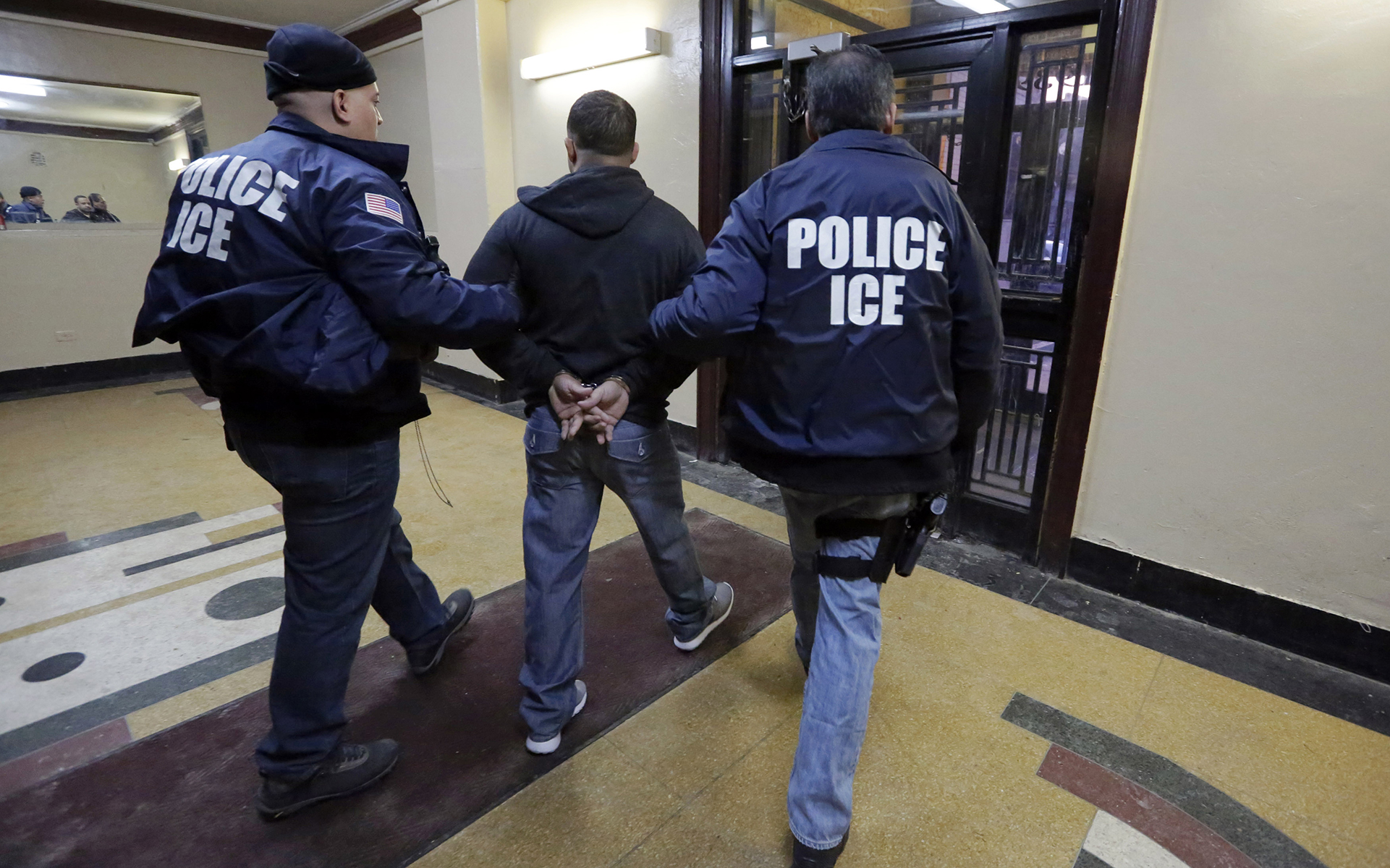 In this March 3, 2015 photo, Immigration and Customs Enforcement officers escort an arrestee (not Joel Guerrero) in an apartment building, in the Bronx borough of New York, during a series of early-morning raids. (Richard Drew/AP)

Jessica Guerrero, who was with her husband when he was arrested, said an ICE officer even told her specifically that Joel Guerrero was being deported for a misdemeanor marijuana charge.

She’s ordered a copy of the judgement from Onslow County, North Carolina, where Guerrero was originally charged, she said.

A court clerk confirmed that Guerrero was charged with a misdemeanor—not a felony.

A clerk at the Onslow County Superior Court confirmed to Leafly that Guerrero was indeed charged with a misdemeanor—not a felony.

If the ICE spokesperson is right about that, then the fact that Guerrero was convicted of a misdemeanor, not a felony, would not matter in his deportation case. Immigration law treats anything beyond simple possession as a drug felony, regardless of the original charge. That gives ICE officials broad authority to deport all but the most minor cannabis offenders.

Cannabis As a Deportable Offense

President Trump may be taking a harsh public stance on immigration, but the strictures allowing deportations for minor drug offenses have been around since the mid-90s, when Bill Clinton and Congress enacted them as part of the 1996 omnibus crime bill. They’ve stuck around ever since. And the Trump White House isn’t the only administration that’s used them. Data provided by Syracuse University shows that deportations for drug offenses increased by 15% from 2008 to 2013, while Barack Obama was in office. In 2013 alone, over 40,000 people were deported for drug offenses.

Those rules have been known to most non-citizen residents. Yascha Mounk, a Slate columnist and Harvard lecturer, wrote recently in the New York Times about his own “overly cautious” approach to protecting his US residency. “When applying for a work visa, or for a green card, or for naturalization,” he wrote, “I would have to document every citation and arrest. And since the law explicitly instructs the officer who would decide my fate to ascertain whether I am of ‘good moral character,’ I preferred to avoid the slightest risk of legal trouble.”

The Obama administration focused on what it called “smart enforcement,” a policy under which immigration authorities aggressively deported immigrants identified as criminals or terrorists. Because of that policy, the percentage of people deported as a result of criminal convictions rose steadily from 2011 through 2016, from 67% to 92%. And those removals weren’t all for violent crimes. Sejal Zota, a lawyer at the National Immigration Project, estimates that in 2013 alone, roughly 6,000 people were deported for personal possession of marijuana. 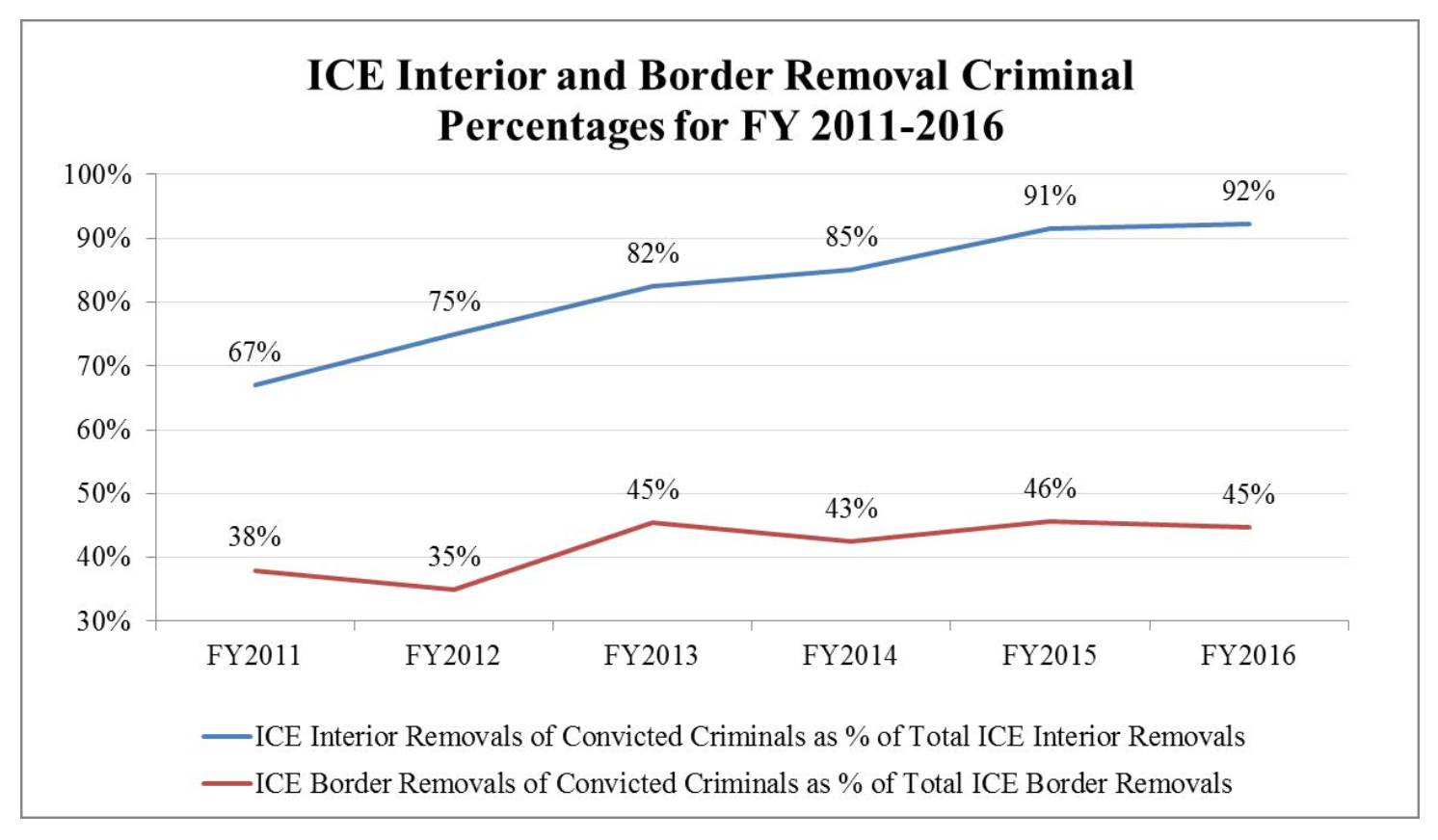 What has changed under President Trump? It’s difficult to say with any certainty so far. We have mostly anecdotal reports, and it’s hard to know whether those are increasing because enforcement is ramping up or because Trump has thrown such a bright spotlight on the subject. We do have two months of data–January and February 2017–but those figures are muddled because ICE operated for three of the four January weeks under existing Obama-era policies. According to the latest numbers supplied by ICE, 35,604 people were deported in January and February combined. If 2016 figures were evenly spread over 12 months, they would average out to 20,021 deportations per month, which is a higher rate, so far, than ICE has recorded in 2017.

It’s a far lower rate, in fact, than ICE recorded under the Obama administration in 2012, when an average of 34,154 people were deported per month. 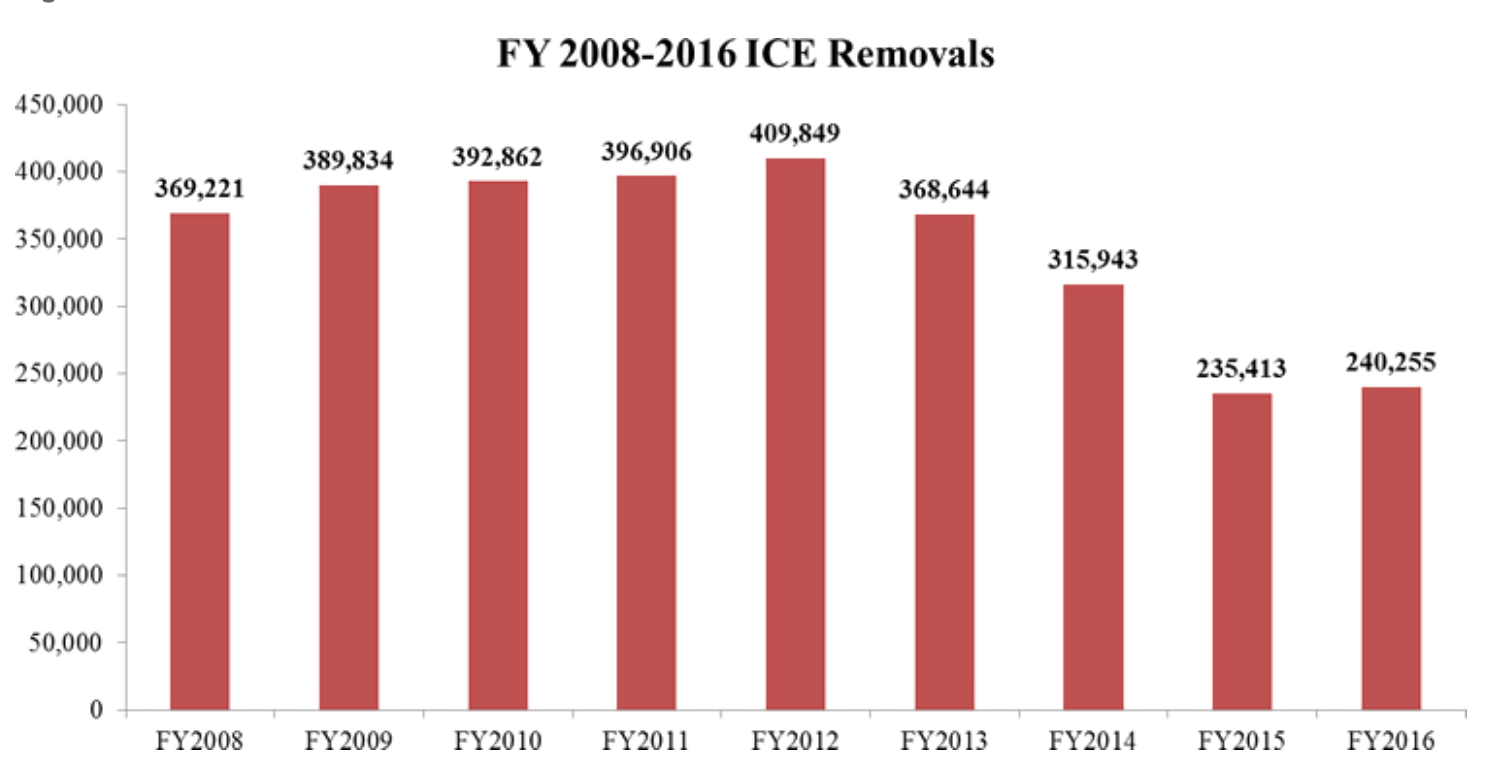 Annual deportations from the United States. Source: US Immigration and Customs Enforcement.

Anything Beyond Simple Possession

By law, any drug offense beyond simple possession of 30 grams or less of marijuana is enough to deport someone. Even other minor cannabis crimes, like a second possession charge or smoking in a school zone, are enough to trigger a deportation, according to lawyers who specialize in criminal immigration law.

For people applying for green cards, or for legal residents returning to the country, the rules are even stricter. Admitting to ever smoking pot — even in a legal state like Colorado — is enough to have someone ruled “inadmissible” to enter the United States.

Last year, the Denver-based alt-weekly Westword reported the story of a young Chilean woman who was barred from entering the United States after she admitted to trying state-legal cannabis in Colorado on a previous visit.

A couple of things seem to have changed under Trump. Various reports indicate that many Immigration and Customs Enforcement agents feel like the restraints holding them back have been released. Agents “feel emboldened and they feel that now they have a president that’s basically is going to give them carte blanche,” Rep. Raúl Grijalva (D-Ariz.), a frequent critic of ICE tactics, said in a recent interview with HuffingtonPost’s Elise Foley. During Trump’s first week in office, he signed an executive order that called on border officers to “detain individuals apprehended on suspicion of violating Federal or State law, including Federal immigration law.” That’s always been the law, of course, but Trump’s order and his public proclamations made clear that he expected ICE agents to stop prioritizing violent criminals and go after every and any non-citizen suspected of violating federal or state law, no matter how minor the offense.

Today, “there is a clear ‘everything goes and everyone is a target’ culture in ICE,” Greisa Martinez, advocacy director at the undocumented activist group United We Dream, told Elise Foley. “It’s the realization of the dreams of a lot of ICE agents that endorsed Trump.”

A big part of the new, bolder tactics on the border is the stepped-up investigation of an immigrant or traveler’s mobile phone, email, and social networking data. Six years ago, Customs and Border Agents rarely asked to search a traveler’s cell phone. As Leafly’s Chris Roberts documented yesterday, in 2010 border agents nationwide searched fewer than 400 phones per month. In February 2017, they searched about 5,000 devices, often looking for evidence of lawbreaking–including the purchase or consumption of state-legal cannabis.

Jacob Sapochnick, a immigration lawyer based in San Diego, said he had a German client who was detained for seven hours in August after Border Patrol agents found images from Burning Man on his phone. Another client, Sapochnick said, was asked if he’d tried marijuana while on vacation in Maui.

“Those are the kinds of things where you have to be careful how you answer,” Sapochnick said. “That’s why they’re searching your social media and phone–to elicit cues for whatever they’re looking for, to be able to deny you entry.”

Since Trump took office, Sapochnick said, he knows of at least three people who have had their student visas revoked for marijuana offenses — all of them from Muslim countries.

“I think it’s going to get worse and worse, honestly,” Sapochnick said. “People are going to have to be very, very careful.”

Bad Under Obama, Worse Under Trump

After Washington and Colorado legalized recreational marijuana use, in 2013, Eric Holder, then attorney general, made a historic announcement: The Obama administration would not go after marijuana users or businessmen who were following state law.

At the same time, the Obama Administration took the opposite stance on immigrants with marijuana offenses, argues Matt Adams, a lawyer at the Northwest Immigrant Rights Project.

“That was under Obama,” he added. “Of course, the outlook is even more grim when you look at Sessions coming in as attorney general.”

Things are certainly grim for Joel Guerrero. He’s been checking in with ICE every six months since 2011. His green card was revoked that year when he returned from a trip to the Dominican Republic and then missed an immigration court date.

In 2014, an immigration judge gave Guerrero an Order of Removal, according to his wife, Jessica. But she said ICE agents told him, “If you keep reporting to us, you don’t have to worry about it.”

“He shouldn’t have taken them at their word,” she said. If her husband gets deported, Jessica Guerrero, who’s from New York, plans to leave the country with him.

Part one
ICE Uses a Cannabis Misdemeanor To Arrest, Deport
Part two
How to Stay Legal at the Border and Beyond
Part three
Under Trump, Legal Cannabis Is a Deportable Offense
Sign up for more Leafly news
Thank you for subscribing!