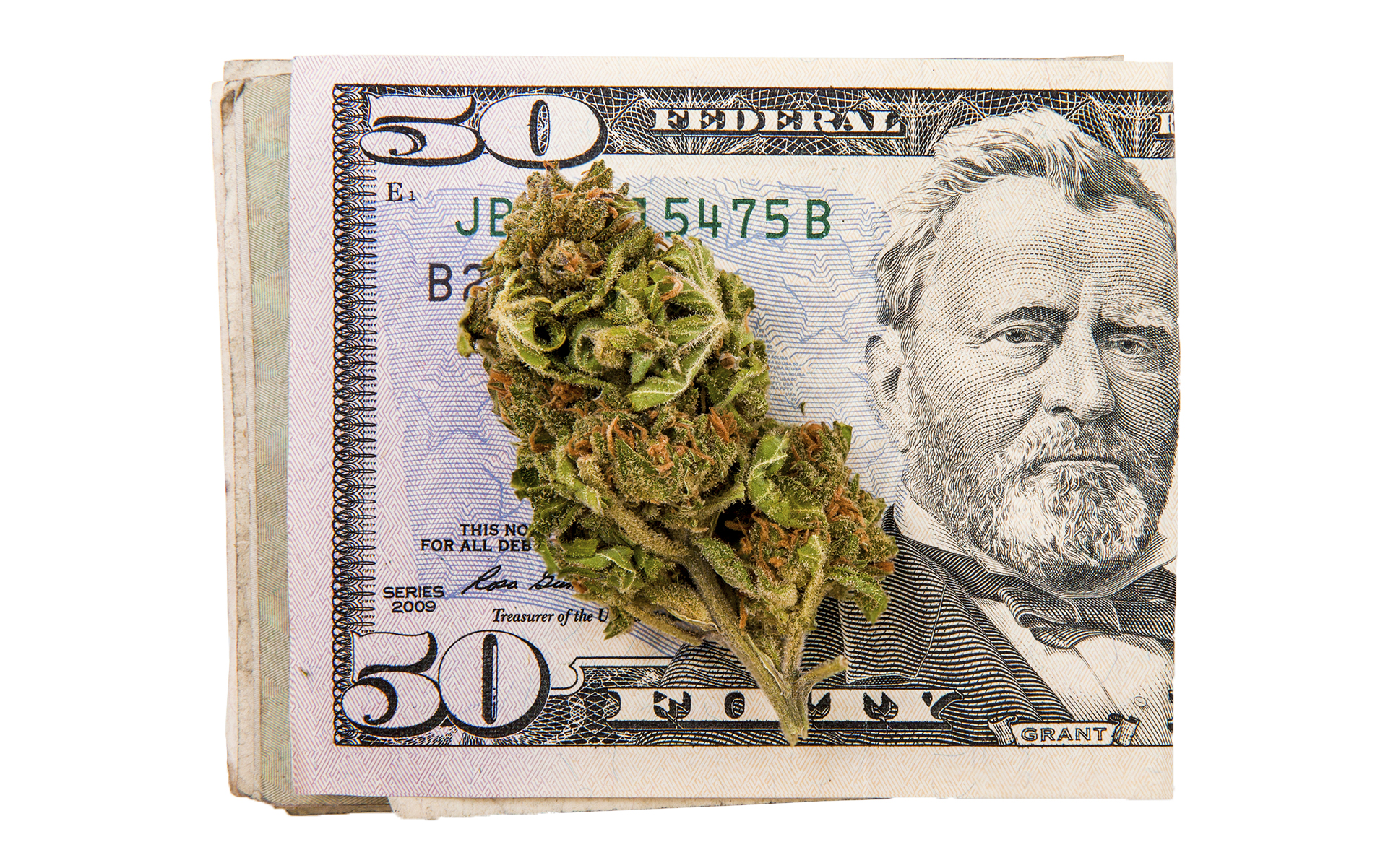 Marijuana and Dollar notes
Where is all that campaign cash coming from?

In key legalization battleground states like Massachusetts and California, legalization opponents have claimed that out-of-state donations are funding cannabis campaigns.

Is it a fair claim?

To find out, we made a dive into a number of state campaign finance databases.

The short answer: It depends on the state. In most cases—California, Florida, and Nevada—a majority of money donated in favor of legalization has come from in-state sources. In Massachusetts, though, it’s a different story. In the Bay State, most advocacy money has come from out-of-state sources, and most opposition cash has come from within the state.

Here’s a state-by-state breakdown in some of the most important races. 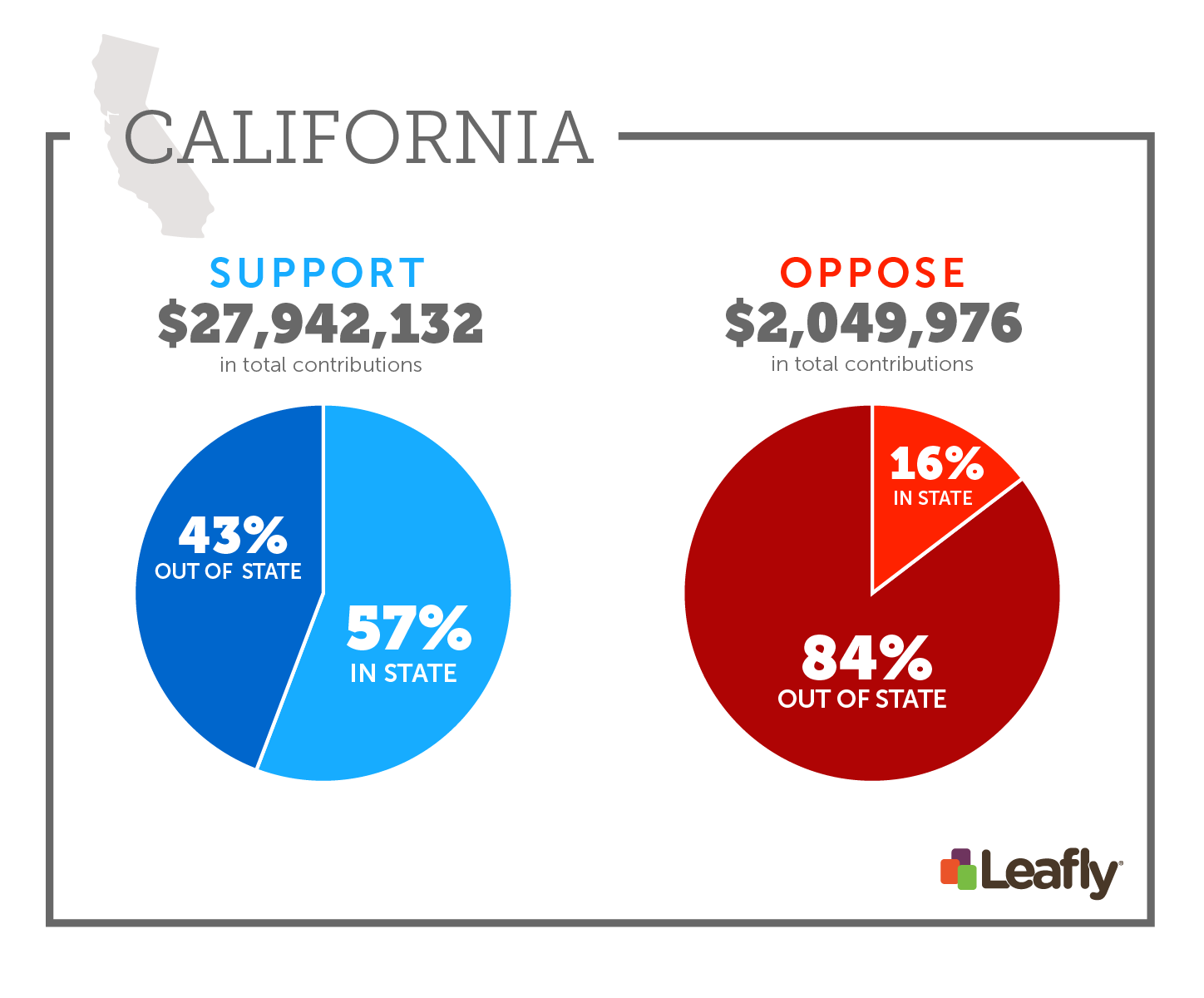 For the opposition, it’s a different story. In-state money makes up only 16 percent of the total donations reported by legalization opponents. Anti-Prop. 64 groups have reported $2,049,976 in 58 total donations, with in-state donations accounting for just $345,915 of that money. 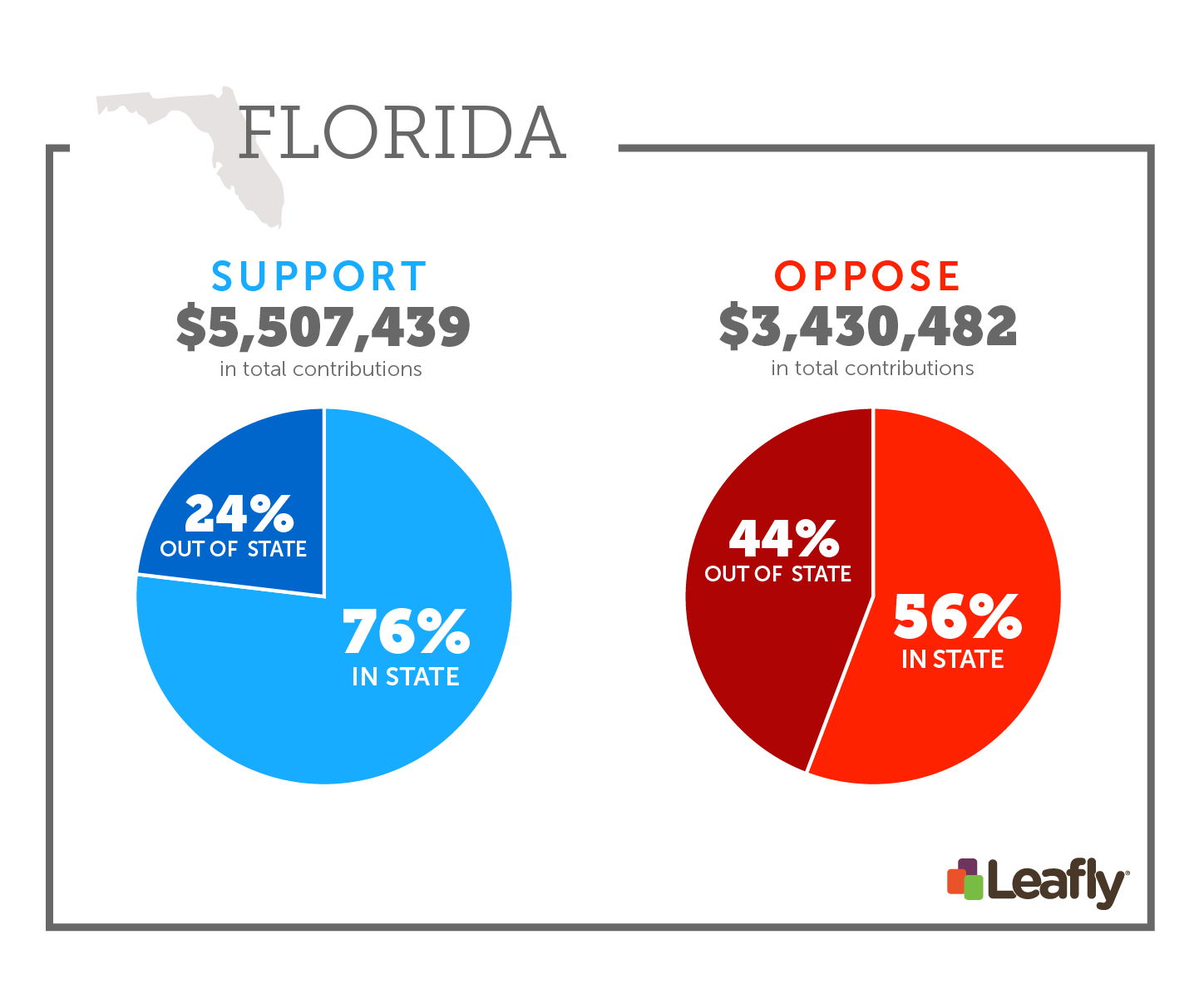 The opposition in Florida has seen fewer in-state dollars flowing into their war chest. They reported 41 donations for a total of $3,430,482 raised. Only 56 percent of that 3.4 million is from the state of Florida, with $1,930,380 coming from out of state. 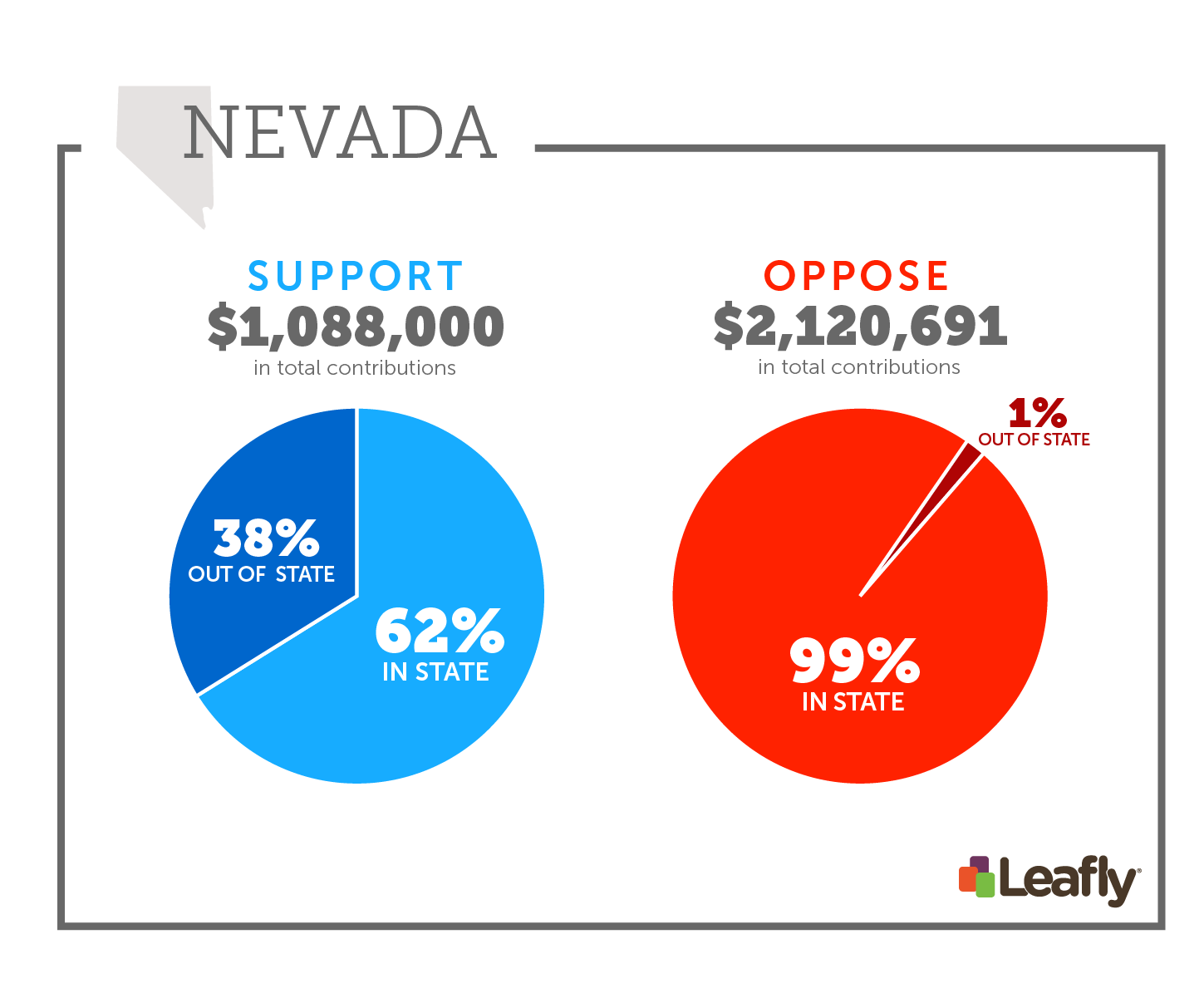 Things in Nevada are a little different. Las Vegas-based casino magnate and billionaire Sheldon Adelson donated $2 million to the opposition last week, which as you might  imagine, changed the No On 2 campaign’s financial picture considerably. In fact, Adelson’s contribution represents 94 percent of the campaign’s contribution total. 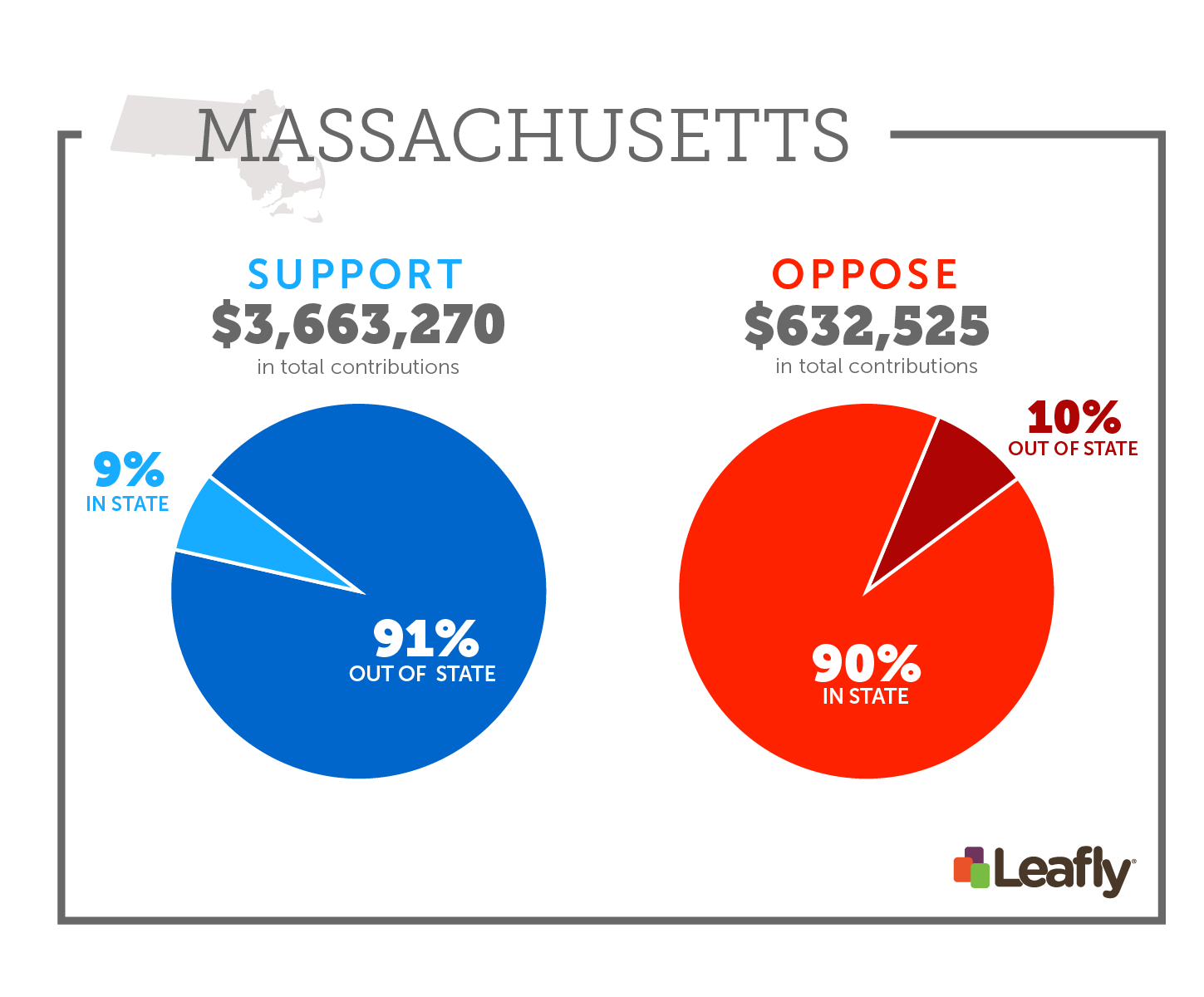 Out-of-state donations make up the majority of funds banked by Massachusetts’ campaign to legalize adult-use cannabis. Several Washington DC-based PACs, notably the New Approach PAC, have donated millions of dollars to the campaign. In total, 276 donations have brought in $3,663,270. In total, 276 donations have brought in $3,663,270. There were 50 donations from out-of-state donors reported for the advocates, but that total made up the majority of donations, with 91 percent of the 3.6 million coming from out of state ($3,323,750.00).

The opposition campaign has only generated $632,525 in 88 donations. The percentage of in-state donations totals 90 percent, as there only $61,500 was donated from outside of Massachusetts.