Here’s Why You Should Consider Dabbing With Quartz

Patrick BennettJanuary 22, 2019
Share
Share on Twitter   Share on Facebook
Print
(rgbspace/iStock)
Perhaps no other material has made as big of an impact on dabbing culture as quartz has over the past several years. Initially created as an alternative to materials like titanium and ceramics, quartz is now regarded as the gold standard for dabbing rig pieces.

Quartz can withstand and retain heat with less risk of breaking and it can preserve concentrate flavors better than other materials.

What makes quartz so great for dabbing cannabis concentrates? It can withstand and retain heat with less risk of breaking and it can preserve concentrate flavors better than other materials.

Here we look at what makes quartz so popular, how quartz nails and accessories have evolved, and best practices for quartz cleaning and maintenance.

Silicon Dioxide (SiO2), also known as clear-fused quartz or fused silica, is a solid, amorphous (non-crystalline) material comprised of silicon and oxygen. While very similar to traditional glass, the two are distinct in that quartz contains no other materials.

How to Choose the Best Dab Rig Nail for You

Why Dab With Quartz?

Quartz is great for low-temperature dabbing, the practice of using reduced temperatures when heating a nail in order to preserve terpene flavors during the sublimation and inhalation processes.

When used in conjunction with a carb cap or any other device designed to create convection, quartz nails preserve terpenes because they can maintain a lower temperature for a longer period of time before cooling off. This creates a much more robust and enjoyable dabbing experience compared to other nail materials, which can burn off terpenes with higher temperatures.

What is cold-start or reverse dabbing?

Quartz is also a champ when it comes to thermal conductivity. It can withstand high temperatures over time with less risk of breaking, and can also retain steadier temperatures for longer periods, making for easier and less rushed dabbing without the fear of cooling.

The amount of heat a quartz nail can retain depends on its thickness, and this is usually advertised by the retailer.

A Brief History of the Quartz Nail

Before 2010, low-grade flathead nails were easy to produce and often accompanied early versions of dab rigs. These impure glass nails would break easily, so quartz began to show up as a stronger, more resilient alternative.

The introduction of the quartz domeless nail was the turning point when quartz became a major contender for nails.

But the flathead design of early quartz nails was still imperfect. Although it fit well with early dab rigs that had domes for creating convection, concentrates would often melt off the ridges and go to waste. Cupped designs proved to be a better option with domed rigs, but these nails couldn’t retain heat long enough.

The introduction of the quartz domeless nail was the turning point when quartz became a major contender for nails. Designed to be used without a dome, these nails could hold concentrates easier and retain heat longer. Quartz domeless nails were quickly recognized for providing a better flavor when dabbing, compared to titanium and ceramic nails.

How to Shop for Your First Dab Rig

As it grew in popularity, several influential American glassblowers started custom designing nails with quartz. Out of this explosion of creativity came several designs, including the Honey Bucket model from Mothership Glass, the Quartz Club Banger from Quave Glass, and the Trough from Joel Halen.

While each of these designs are still popular today, the simplified banger nail has easily become the most popular for quartz enthusiasts because of its functionality, simple and sleek design, and easy replicability. Quartz nails complement glass more than other materials like titanium, bringing a more attractive aesthetic to expensive dab rigs. 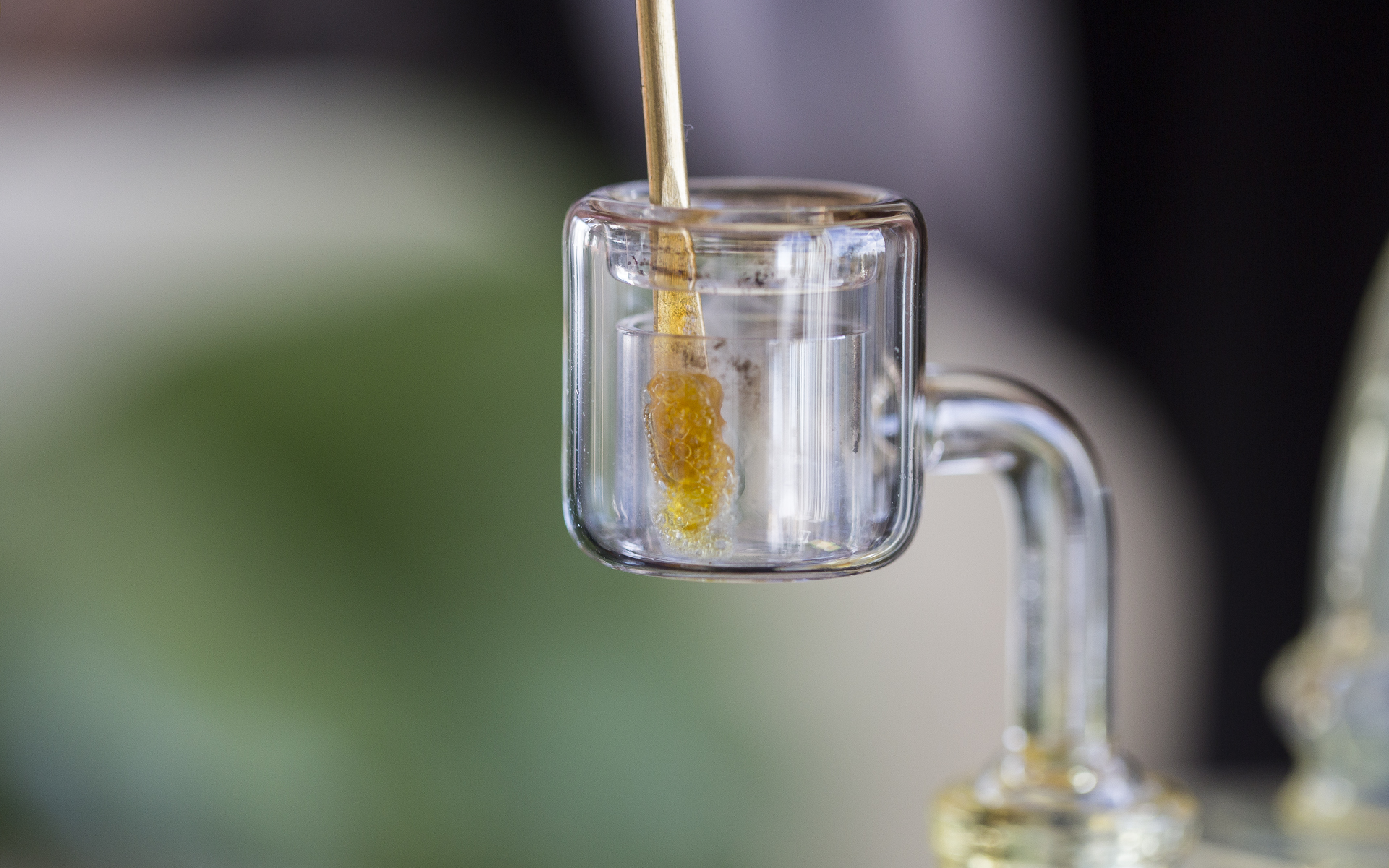 A fresh quartz nail, translucent and free of cloudiness and debris, will give you better dabs, allowing you to taste the flavors and terpenes of concentrates better.

Because of the amorphous nature of fused quartz, its atomic structure is in a perpetual state of imbalance. When heated to extreme temperatures, a process called devitrification occurs, when the atoms of quartz attempt to reorganize into a crystalline structure.

This can happen when cooled quartz is exposed to various elements, including extreme temperatures, like a red-hot torch flame, the introduction of contaminants like oil reclaim, or continued and prolonged exposure to oxygen as a byproduct of oxygenated torching.

The Avid Dabber: 3 Tips for Keeping Your Quartz Banger Clean

When devitrification occurs, quartz becomes cloudy. This process is irreversible without lab-grade chemicals and it can negatively affect the function of the nail. To avoid this altogether, be proactive in taking care of your nail:

An old standard for nail care was seasoning—heating a new nail until it clouds and turns red, seasoning it like you would a cast iron skillet. But seasoning is, in fact, not considered a best practice for nail hygiene these days because the extreme temperatures cause devitrification.

How to Clean a Dab Rig Nail

The world of quartz dabbing accessories continues to grow with new technologies, fueled by a never-ending pursuit to create a quality low-temperature dabbing experience. Here are some exciting innovations in quartz to look out for:

Quartz bangers can create build-up and residue of concentrates inside the nail stem. This occurs when oil either bubbles over or solidifies within the stem when taking a dab. Thermal bangers mitigate this with their design: With a large cylinder to redirect airflow, residue can’t reach the downstem of the nail.

Carb caps are designed to create convection when dabbing, allowing concentrates to sublimate more evenly over longer periods of time when exposed to lower temperatures. Bubble carb and directional caps help facilitate this process by siphoning airflow toward every corner of the skillet.

The Avid Dabber: Why You Should Cap Your Dabs

Their unique design allows the dabber to manipulate the direction of incoming air when taking a dab by moving the cap around. The result is less reclaim at the end of the dab and a better flavor when low-temperature dabbing.

One way to ensure that high-end quartz nails don’t suffer the fate of devitrification is to use a quartz insert or skillet. These skillets are designed to be pre-loaded with concentrates and placed in a heated flat-top nail. This lets the concentrate be sublimated inside of the skillet, leaving the nail basin free from the potential of residue buildup.