In a world of vaginal steaming and jade vaginal eggs, it’s reasonable to wonder if cannabis suppositories are just another Goop-y addition to the canon of questionable women’s “health” products.

But suppositories are nothing new. In fact, they predate modern society, with historical references to cannabis suppositories going back over 5,000 years, to ancient Mesopotamia. Nowadays vaginal suppositories with various ingredients are used to treat inflammation, menstrual pain, birth control, and bacterial and fungal infections.

Suppositories filled with cannabis, hemp, or isolated cannabinoids like CBD aren’t available in stores yet, which can leave consumers unsure of their legal status. Classified as cannabis extracts, suppositories are legal in Canada, although we’ve yet to see a Health Canada-approved cannabis suppository hit the adult use market.

So where are they? “No seriously, where are they?,” asks Rahim Dhalla, owner and head pharmacist at Hybrid Pharm. At his pharmacy, Dhalla works with a gynecologist to custom make suppositories for patients with pain, endometriosis, and pelvic floor dysfunction. Dhalla says vaginal suppositories can be effective alternatives to conventional treatments for these conditions—such as over-the-counter painkillers and selective serotonin reuptake inhibitors (SSRIs)—often with fewer negative side effects.

There isn’t a big market for cannabis suppositories. The only people who really use them are usually already experienced with cannabis and its benefits.


“There isn’t a big market for cannabis suppositories. The only people who really use them are usually already experienced with cannabis and its benefits,” shares Dhalla.


Women, trans, and non-binary people are often uncomfortable discussing their reproductive processes, which compounds the lack of consumer demand. “We don’t even say menstrual cycle or period,” says Tabitha Fritz, director of cannabis education at cannabis retailer Mihi. Fritz explains that this aversion to discussing the reproductive cycle leaves little financial incentive for companies to invest in clinical research or product innovation.


Related
Conceive With Caution: How Cannabis Can Affect Fertility

The Canadian market has attempted a few female-focused brands, but they can feel disingenuous and a bit like pink-washing, says Fritz. And with barely more than a year of legalization behind us, many brands are still setting up their basic infrastructures, and focusing on the products they believe will net the highest returns. Cannabis suppositories are niche products—vaginal suppositories even more so. This doesn’t mean there’s no place for them, says Fritz, just that the industry needs more time to mature.

“In order to successfully carve out a niche, and turn a profit, you have to make products that the target market actually wants to purchase,” she explains. There’s a huge potential market there—roughly half the population—but success will require demand, followed by supply of quality products.

More research is needed on cannabis and how it interacts with the endocannabinoid receptors in the female reproductive system in order to successfully bring these types of products for market, says Fritz.


Related
How Does Cannabis Affect Men and Women Differently?

The more we talk about it without blushing, the more we bring normalization and acceptance.


“The more we talk about it without blushing, the more we bring normalization and acceptance,” says Fritz. When people with vaginas feel empowered to talk about them, it gives others permission to do the same.

Moreover, once the industry does start producing cannabis suppositories, it’s essential to include all potential customers. “I have health issues that fall under “women’s health” and yet I’m not a woman. I often feel there isn’t a seat at the table for me,” says Xavier, a cannabis industry professional who identifies as non-binary, and asked to be identified by first name only. Targeting vaginal products just for women limits revenue potential in an already niche product line by excluding a portion of the consumer market (also, it’s 2020 folks).

Where to find vaginal suppositories now

I just wish I could buy regulated suppositories. It's time consuming to make them from scratch, and it’s tough to know the exact dosage with homemade infusions.


For now, Canadians who want to take cannabis vaginally are turning to compounding pharmacies like Dhalla’s Hybrid Pharm, or making their own at home.

“I just wish I could buy regulated suppositories. It’s time consuming to make them from scratch, and it’s tough to know the exact dosage with homemade infusions,” says Xavier.

Pharmacy involvement has huge potential to bridge the gap in healthcare when it comes to the accessibility of cannabis health products. At Hybrid Pharm, cannabis suppositories for rectal and vaginal use are quite popular, says Dhalla. “There can be hesitation when suggesting suppositories, but patients using cannabinoids have usually exhausted all other options and are willing to try alternatives,” he says. 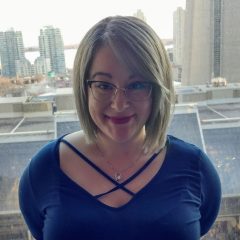 Ashley Keenan is a content creator and media consultant in the cannabis industry. Ashley writes meaningful, fact-based content to entertain, educate and destigmatize the plant. Ashley is also a skincare expert and spent 10 years as a practicing esthetician, prior to pursuing her masters degree and new career path. Ashley is a passionate medical cannabis advocate and warms hearts with her open and honest health journey.