For at least two decades, cannabis-scented air has been a common part of Montreal’s olfactory character. At any time of day or night, you can walk down “The Main” (Saint-Laurent Boulevard) or Sainte-Catherine Street and smell someone enjoying a pinner on break from work, or out walking their dog, or concluding a business meeting. Yes, cannabis is still illegal here—at least until this summer’s deadline for national legalization—but the overall culture of our city is enormously cannabis-positive. If you’re coming to Montreal, here are five fantastic places to visit while high.

Every Sunday during the summer, hundreds of people gather around the statue of George-Étienne Cartier in Jeanne-Mance Park to join in a massive drum-circle and attempt to hotbox the great outdoors. This has been going on at least since the early 1990s. Police are present but don’t bat an eye at people sparking a joint (they’d have to arrest all 400 people), so a massive cloud of skunk smoke hovers over the crowd from lunchtime till dusk. This makes it easy to find: If you’re in Montreal’s Plateau area, just follow the sound of the drums until you smell weed, and let your nose guide you home.

The Tam-Tams appeal to a particular type of cannabis consumers, those who identify with “cannabis culture.” This can be a turnoff—not everybody loves Bob Marley, hacky sacks, and white college students wearing Baja Hoodies in Jamaican colours. But if you like to get high with a crowd of other cannabis enthusiasts and explore the rhythmic textures of a hundred drums, you couldn’t ask for a better place to spend a Sunday.

Montreal is named for the large hump in its centre, Mount-Royal. This isn’t a mountain, exactly, but it’s enough. If the Tam-Tams scene is too busy for you, follow the Chemin Olmstead trail through the Frederick Olmstead–designed Mount Royal Park until you get to the gigantic staircase. This will require you to climb a couple of hundred stairs more or less straight up, but the reward for your effort is a fantastic view. The biggest and most famous lookout at the top of the mountain is the huge and stately marble Kondiaronk Belvedere, which is lighted at night. The view of the city from here is breathtaking, and if you want to play some music, hoof a hacky-sack around, or throw a frisbee, this is the ideal place to do it. It can be crowded in daytime, but thins out after dark.

Also: At the top of the stairs, there is a smaller path that veers off to the right—this leads around the crest of the hill to a series of tiny, secluded lookouts in the woods that offer even more stunning views. Don’t like crowds? Prefer the feeling of getting high in deep nature while looking out over a teeming city? This is your spot.

If you’re not from Montreal, you probably haven’t had poutine. Sure, maybe you’ve had something called poutine, and that’s great. But the precise combination of fries, local cheese curds, and sauce brune is something that other cities never quite get right. Once the munchies set in and your tastebuds are dialed to delicious, Montreal offers you an imposing selection of poutine-speciality restaurants. I will offer here only four:

When Saint-Joseph’s Oratory was completed in 1967, it was (and remains) Canada’s largest church. In a city where exquisite church architecture adorns nearly every corner, the Oratory stands out as a singularly magnificent building, visible from much of the city. It’s stunning enough you don’t even need to go inside (and if you’re reeking of skunk, you may not want to). At all hours of night and day, you can walk around the grounds and gardens and the Stations of the Cross soaking in the immensity of Brother André’s faith. But venture inside is worth it: the gigantic building’s mid-century vintage means it’s designed like a Sistine Chapel imagined by Gene Roddenberry. Whether or not you’re religious, a visit to the Oratory is a far-out experience.

Are you the type of person who likes to get high and experience something bewildering? Take the metro out to the inner edge of suburbia, where you’ll find the post-apocalyptic Décarie Square Mall, legendary even in the 1980s for its high vacancy rate. Wander its surreal halls, past the Dollarama and the empty stores, and enter one man’s cinematic vision: Dollar Cinéma. Legendarily odd hair-loss miracle-cure promoter/cinema owner Bernie Gurberg took over Décarie Square’s two-screen movie house (abandoned in 1997) in 2004, and by most accounts he is the only person who works there. Dollar Cinéma’s lobby feels like his garage, kind of dingy and filled with thrift-store furniture but decorated with genuine enthusiasm. Admission at the Dollar Cinéma is now $2.50, but snacks remain a very enticing $1 each. Bernie takes the tickets, sells the candy, and apparently starts the projectors on the second-run movies he programs. In 2009, the Dollar Cinéma debuted the spectacularly strange VIP Room, a large storage closet filled with patio furniture and a large-screen TV on which Bernie plays DVDs of movies. There is no better theatre in the world in which to see The Room. This is disorienting enough sober, so be prepared. 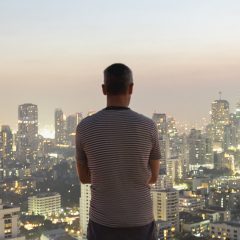 J-P Vaillancourt is a proud Montrealer, eager to share his beautiful frozen island in the St-Laurent with newcomers. He acknowledges that, yes, Quebec has gotten more hostile to cannabis in recent years, but that's the just régions: Montreal is still a cannabis fancier's paradise, and he'd love to show it off to you.