Once a month, staff members at the Santa Cruz Veterans Alliance (SCVA) fill more than 100 brown paper bags with high-quality medical cannabis and pass them out for free at a local community center. For the military veterans who receive it—many of whom struggle with PTSD—the medical cannabis acts as a lifeline to health.

The SCVA, which operates out of an old office in a Santa Cruz neighborhood, has been serving local men and women since 2011, when the organization was founded by military veterans Aaron Newsom and Jason Sweatt.

After six years of service, though, SCVA’s mission now faces challenges due to an ironic new development: the legalization of cannabis in California. New regulations due to take effect in early 2018 don’t allow the SCVA to continue operating as they do today.

“We’ve tried to create this environment of peace through cultivation and cannabis with a purpose.”
Aaron Newsom, SCVA Co-Founder

“With the new law, if we’re not at the end of the chain of custody, we are not allowed to give away anything for free,” Newsom told me during a recent interview in his office in Santa Cruz. “We have to get a storefront where we can retail our product and determine whether we sell it for $50 or $1.00–or provide it in a volunteer-return basis.”

Newsom, 35, is clean-cut and bright-eyed. He served in the marine corps before co-founding the SCVA. Sweatt, 41, is a 10-year Army vet and director of the SCVA. He offered a quieter hello behind black-framed glasses.

As we spoke earlier this summer, workers were busy carrying out construction projects needed to turn the space into a retail cannabis store. California’s Prop 64, which will soon regulate what was once a loose, laissez faire medical cannabis market, requires that the SCVA obtain state licensing and operate a storefront in order to continue carrying out its mission.

That mission includes growing their own medicine.

In the SCVA’s garden, hundreds of cannabis plants are cultivated by a staff of volunteers and a few paid staff.

Rows upon rows of cannabis plants vegetated in silent darkness, lit only by a dim green light. Fans hummed quietly, creating a pleasant breeze in the branches. The grow rooms feel peaceful, surrounding curious visitors among the slow growth of life.

“We’ve tried to create this environment of peace through cultivation and cannabis with a purpose,” Newsom said. “It’s horticultural therapy.” 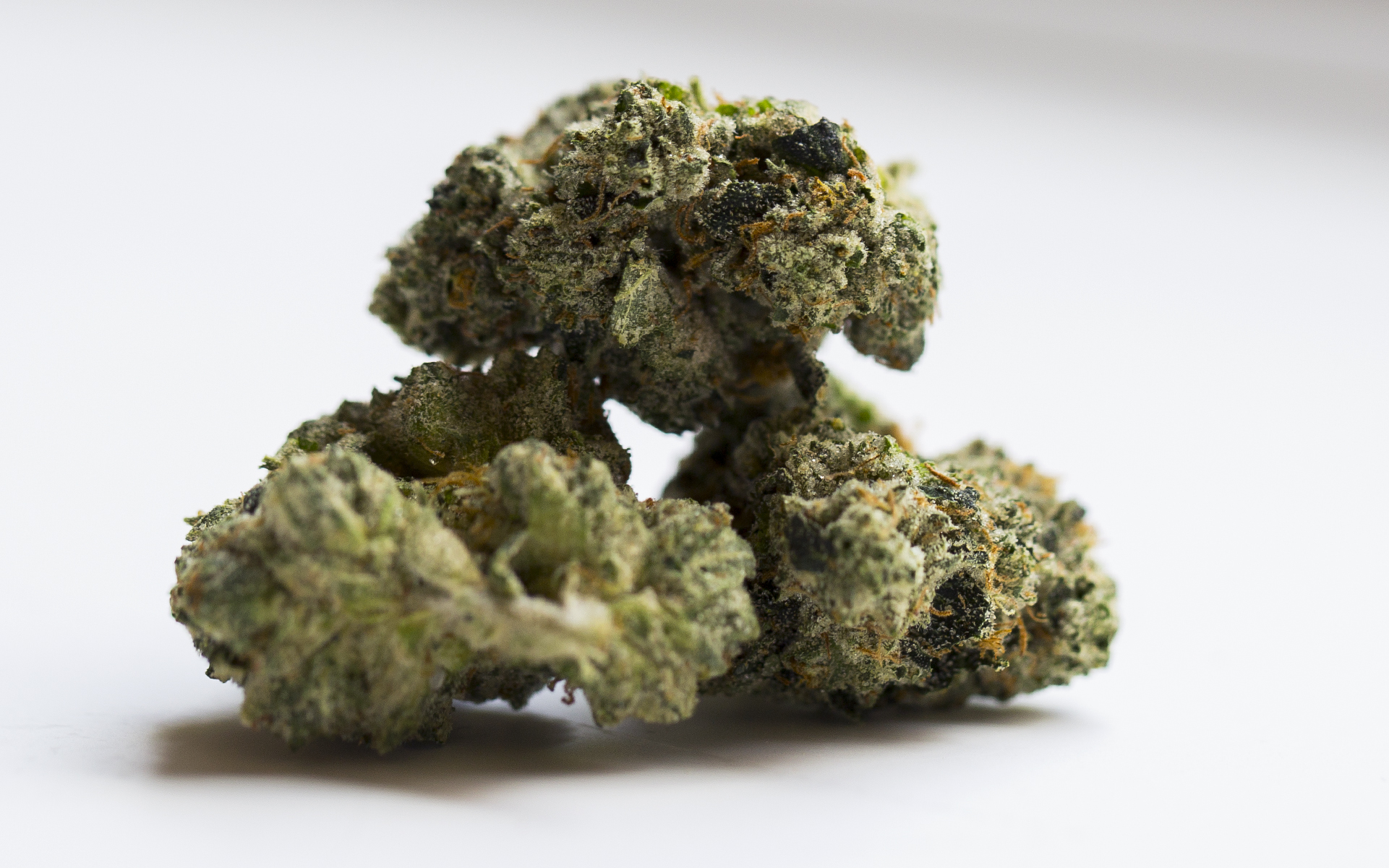 Another room was brightly lit and populated with flowering plants that filled the room with their sweet, fragrant aromas. Kosher Kush, White Fire OG, and a Tangie hybrid were among the stock that sat glittering with trichomes. Though Jason and Aaron started the garden years ago as a twosome, a few other veterans now help tend the plants.

“A lot of these guys were over there [in war] kicking in doors and taking lives,” Newsom explained. “They’re able to come back to slow growth and cultivating life, and then [they’re able] to bring back life in [other] patients.”

When we returned to the office, SCVA staff members had begun packing freshly cured cannabis into brown bags for their veteran brothers and sisters. Music danced in the air, dogs flopped on the floor, and between busy hands, cannabis was shared. Aaron excitedly and emphatically rallied everyone between puffs, and in that moment where it seemed everyone was smiling in unison, it was hard to imagine what each of them had been through. 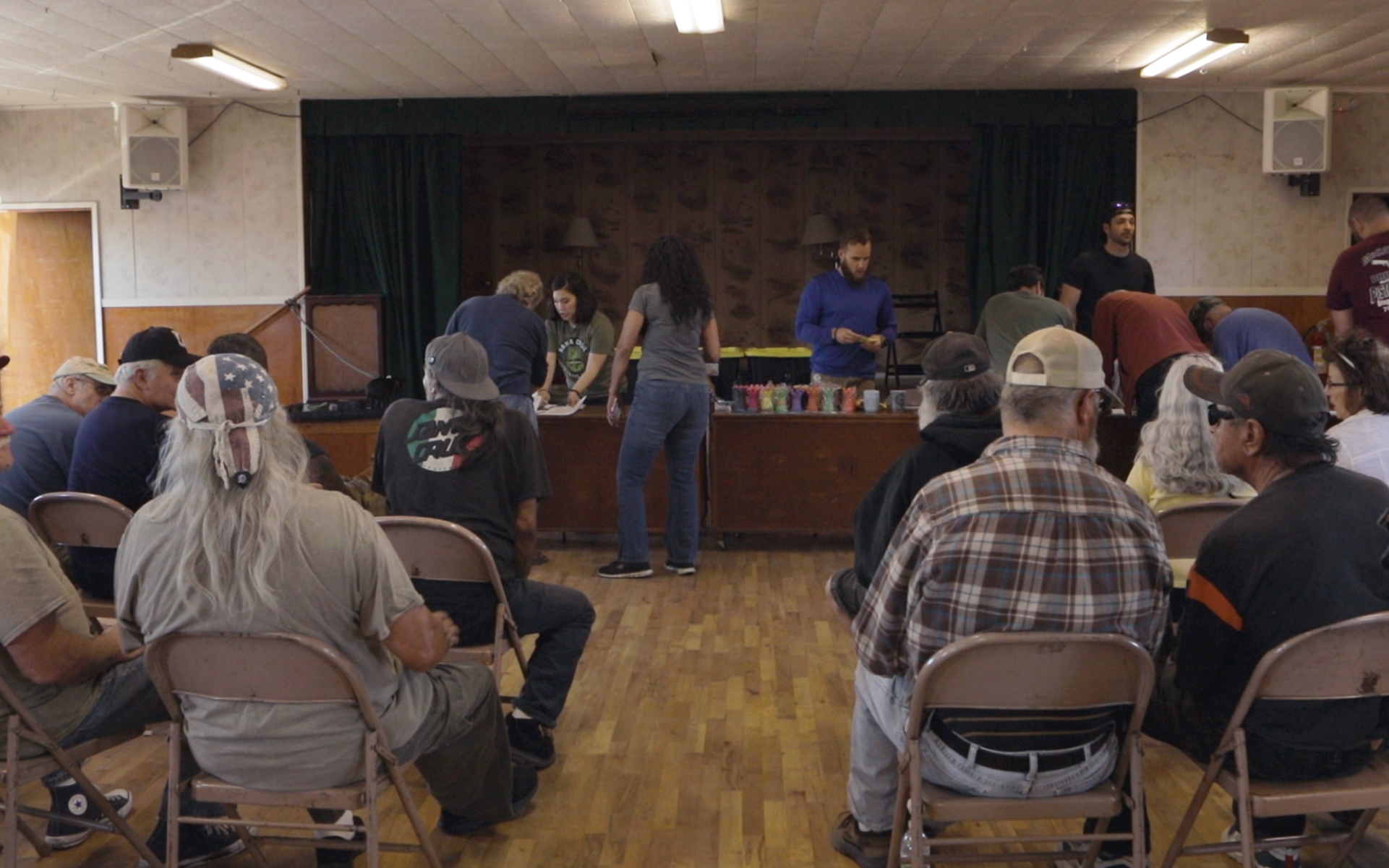 Veterans gather for the monthly SCVA meeting, where medical cannabis is distributed.

For many of those who live with post traumatic stress disorder (PTSD), there is no cure–only temporary relief. It’s a condition that lives in the basement of your mind. Now and then, a trigger kicks in the door leading down to the dark, ushering in fear and anxiety. The dormant trauma, living and breathing below the surface, snaps awake by flashbacks, nightmares, or subtle reminders in daily life. Like a scab on the psyche, it gets torn open again and again.

Therapy and mood-stabilizing drugs have helped many patients strip the “disorder” aspect of their PTSD so that it’s possible to live without the constant looming shadow of memory. But for others, conventional treatments don’t work.

Some patients with this type of chronic, treatment-resistant PTSD have found that cannabis helps bridle PTSD symptoms. It calms an overactive mind, slowing it down to a sustainable pace where peace can be found. Cannabis can also reduce a patient’s reliance on heavier pharmaceuticals, medications with side effects that can devastate a person’s quality of life. 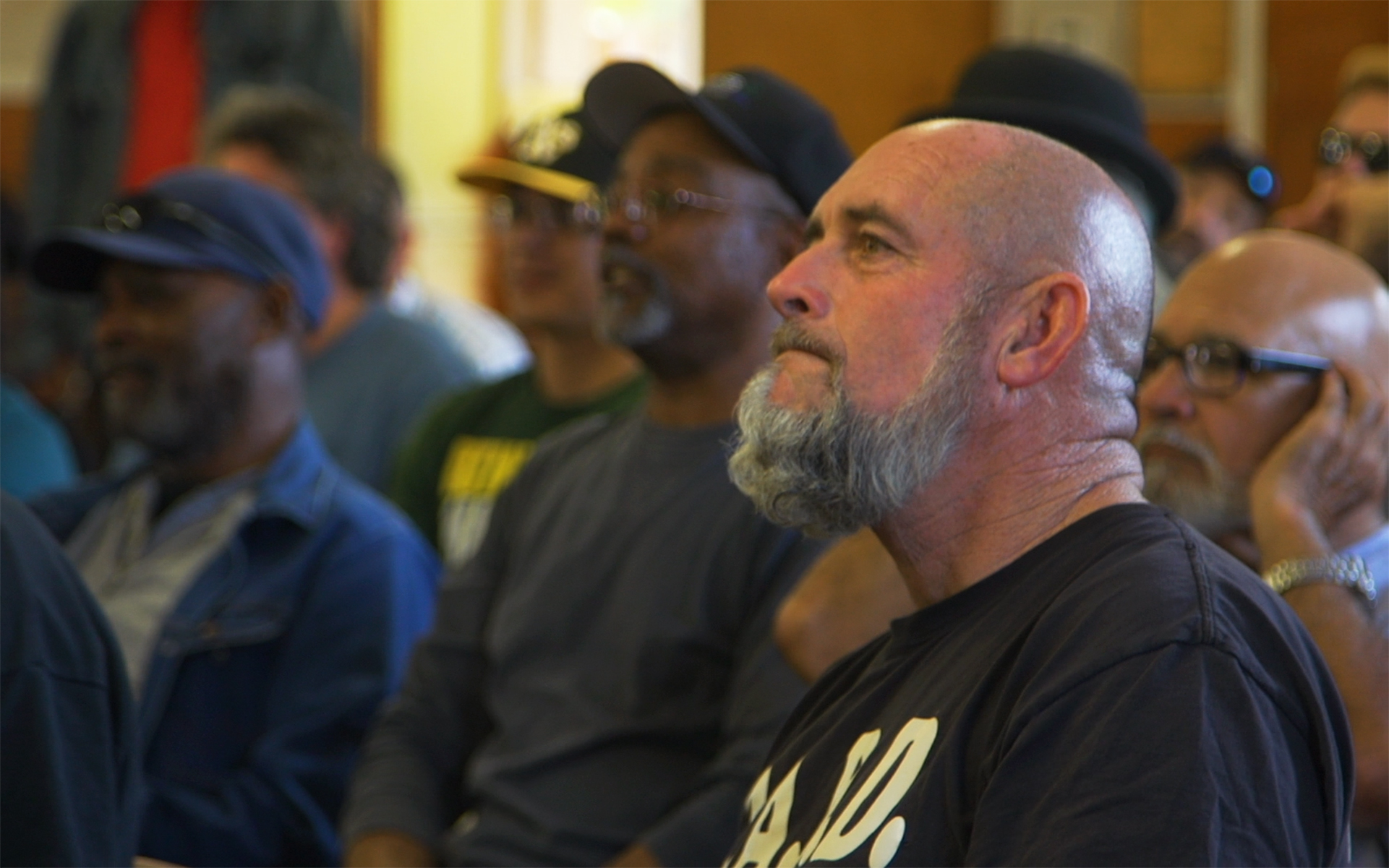 Members of the SCVA tuning in to announcements before cannabis is given out.

Later that day, an SCVA staff member showed me some footage he’d taken during his own combat tour.

On a laptop screen, I watched as a shaky camera moved through a dusty stone corridor. It followed a group of soldiers, guns in hand. The sound of footfalls and muffled movement carried on for just seconds before a blast overwhelmed the senses, blackening sight and deafening ears. When the dust cleared, a soldier was on the ground, surrounded by shouts. A medic leaned over the wounded soldier, repeating words of reassurance.

The soldier who’d captured the footage of the detonated IED (improvised explosive device) was standing behind me, alongside other SCVA staff members. They stood watching with fixed eyes and folded arms, eyebrows folded slightly inward.

Knowing that PTSD manifests differently for everyone, I asked Newsom, Sweatt, and other members of the SCVA what the condition looked like for them.

For Sweatt, the many convoys he did in Iraq left him unable to drive for two years. “I experienced a lot of heightened alert, my head was on a swivel,” he admitted. “When I drove, I was really hypervigilant, looking around, constantly checking my surroundings.”

Sweatt had difficulty reintegrating into civilian life. He moved to California and lived in a van for six months. The re-entry difficulty and social isolation seemed to be common among many of the veterans I spoke to.

“I saw patients whose lives were destroyed by the ravages of drugs and alcohol, but never anyone who was sick from cannabis.”
Dr. Jordan Tishler, Former VA physician

“We’ve got homeless veterans, and many who [struggle to gain] employment and education,” Newsom said. “Returning to civilian life, everyone is out on their own.”

Due to the Schedule I status of cannabis, VA doctors are legally unable to recommend it to veterans. Instead, they are left to prescribe a cocktail of antidepressants, anxiolytics, antipsychotics, opioids, and sleeping medications.

These pharmaceuticals can sometimes create more problems than they correct. Most of the veterans I spoke to noted that cannabis helped them reduce their reliance on opioids, benzos, and other prescription pharmaceuticals. But there’s a catch. The pharmaceutical costs are covered by the VA. Cannabis is not.

And yet it seems to work. I heard a lot of comments like these from veterans working with SCVA:

Lucy, a soft-spoken marine veteran and SCVA member, sat and talked with me for a while. “A lot of therapists who don’t understand veterans, they’re quick to prescribe the same pills I was trying to get away from,” she lamented. With cannabis, however, Lucy found relief.

“I thought it might mellow me out,” she smiled. “It worked.” 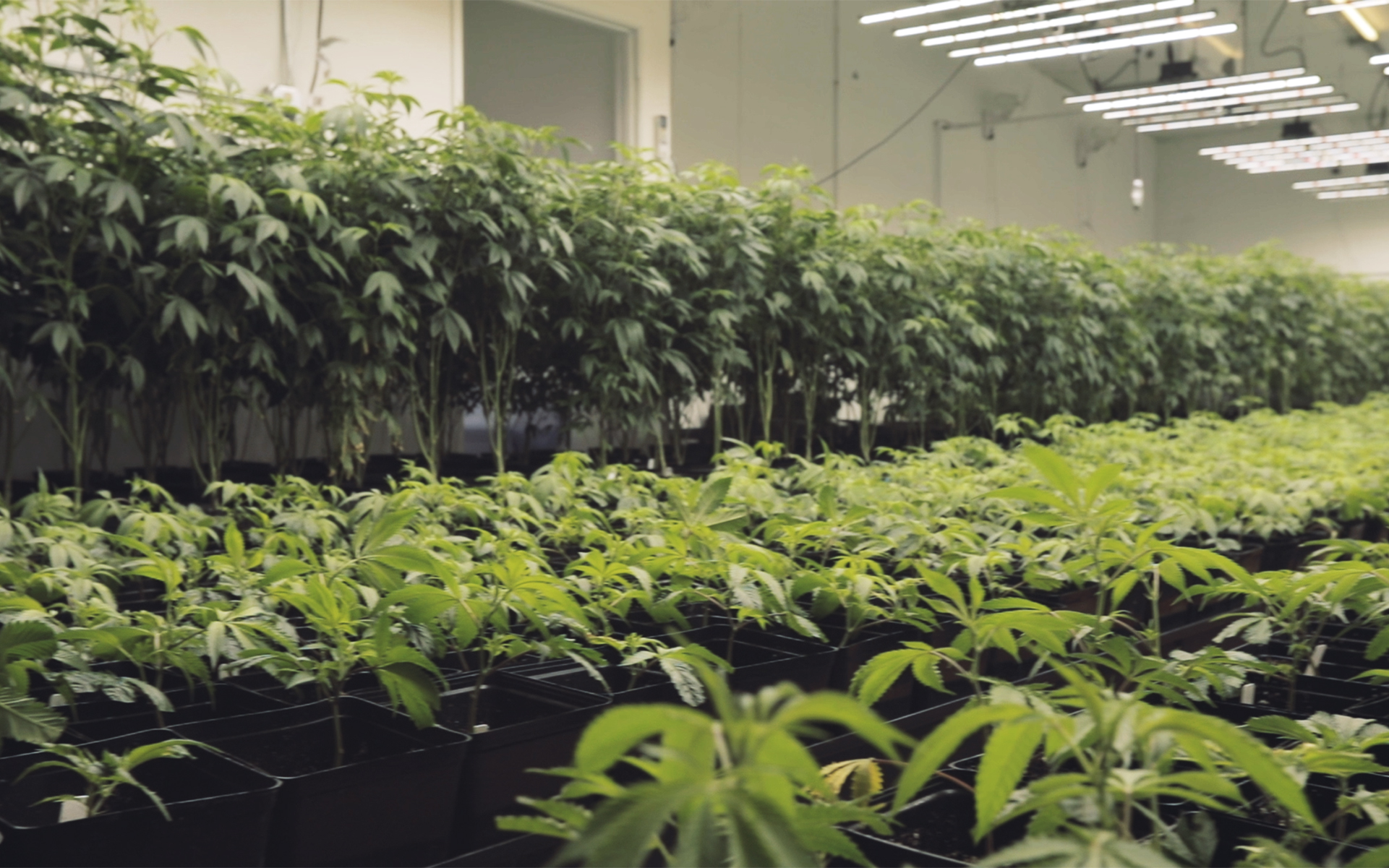 To find out why cannabis could be helpful to a mind plagued by trauma, I contacted Dr. Jordan Tishler in Boston.

A Harvard medical graduate who worked for 15 years as a VA physician, Tishler went on to establish a private practice, Inhale MD, so he could advise patients on medical cannabis.

“Time and time again I saw patients whose lives were destroyed by the ravages of drugs and alcohol,” he told me in a recent phone interview. “It occurred to me that I had seen all these harmed individuals, but never anyone who was sick from cannabis.”

Tishler saw firsthand the therapeutic potential of cannabis for the treatment of both pain and PTSD, so he dove into the research to learn more. He came up with a theory about how cannabis helps calm the mind of a PTSD patient.

“THC and CBD tend to work as a retrograde postsynaptic shut-off valve,” he said. “Their job is to decrease the level of stimulation in systems that tend to be excitatory. These are important systems in our brain that can get revved up and overly triggered [by PTSD or anxiety]. Cannabis tends to dampen those systems.”

Another theory, first posited by neurologist Ethan Russo, proposes that conditions like PTSD can result in a deficiency of endogenous molecules (called “endocannabinoids”) that serve to balance the signals Tisher described. The molecules in cannabis, like THC and CBD, function like these endocannabinoids and can help to restore that balance of signals. And that, in theory, is why PTSD and anxiety patients feel calmer under the effects of cannabis.

For his PTSD patients, Tishler generally recommends a small dose of cannabis at night just before going to bed, noting, “The anti-anxiety effect will last that next day even though the intoxication has worn off.”

For people with PTSD, sleepless nights often open the door to other symptoms and setbacks. Addressing insomnia and nightmares is a common first step. But it’s important, Tishler cautioned, to consider starting at a low dose.

Most doctors aren’t as well-equipped as Tishler to explain the benefits and risks of medical cannabis. Some haven’t educated themselves on cannabis. Others are hampered by ties to the federal government.

As a result, many patients are using medical cannabis with no professional guidance whatsoever. Others have no safe access to it, period. The continued absence of compassionate cannabis laws across the nation is astounding to doctors and patients who have experienced an improved quality of life firsthand. 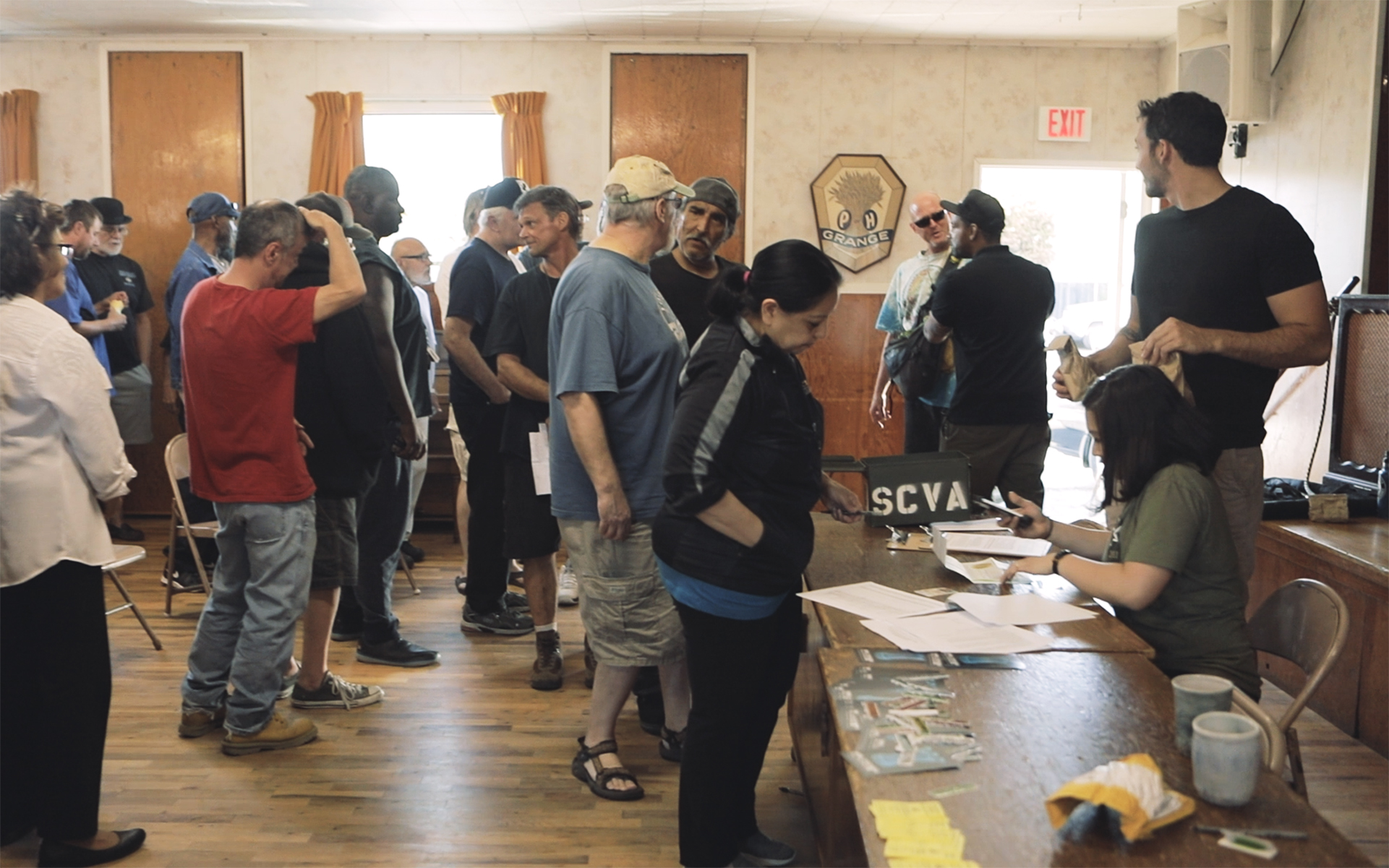 SCVA members line up to receive their monthly cannabis donation.

Back in Santa Cruz, upwards of 100 military veterans poured into a local community hall for the monthly SCVA meeting. Old metal folding chairs screeched against the wood floors as veterans took their seats and caught up with old friends.

At the front of the room, the SCVA staff prepared to pass out brown paper bags full of cannabis grown by their small team. A staff member tossed out silicone accessories for cannabis concentrates, cracking jokes amid booming laughter.

After a few short announcements, the veterans signed in, as if at a dispensary, and accepted the brown bags with smiles and handshakes. Many stuck around long after the meeting ended to catch up with other members. The sense of connection between them contrasted sharply with the isolation and social withdrawal many of them experienced after returning from service.

“We’re not therapists, and we’re not doctors,” Aaron Newsom said. “We just understand each other. That in itself is a healing tool.”