Denver Post Reportedly Cuts All Editorial Staff at The Cannabist 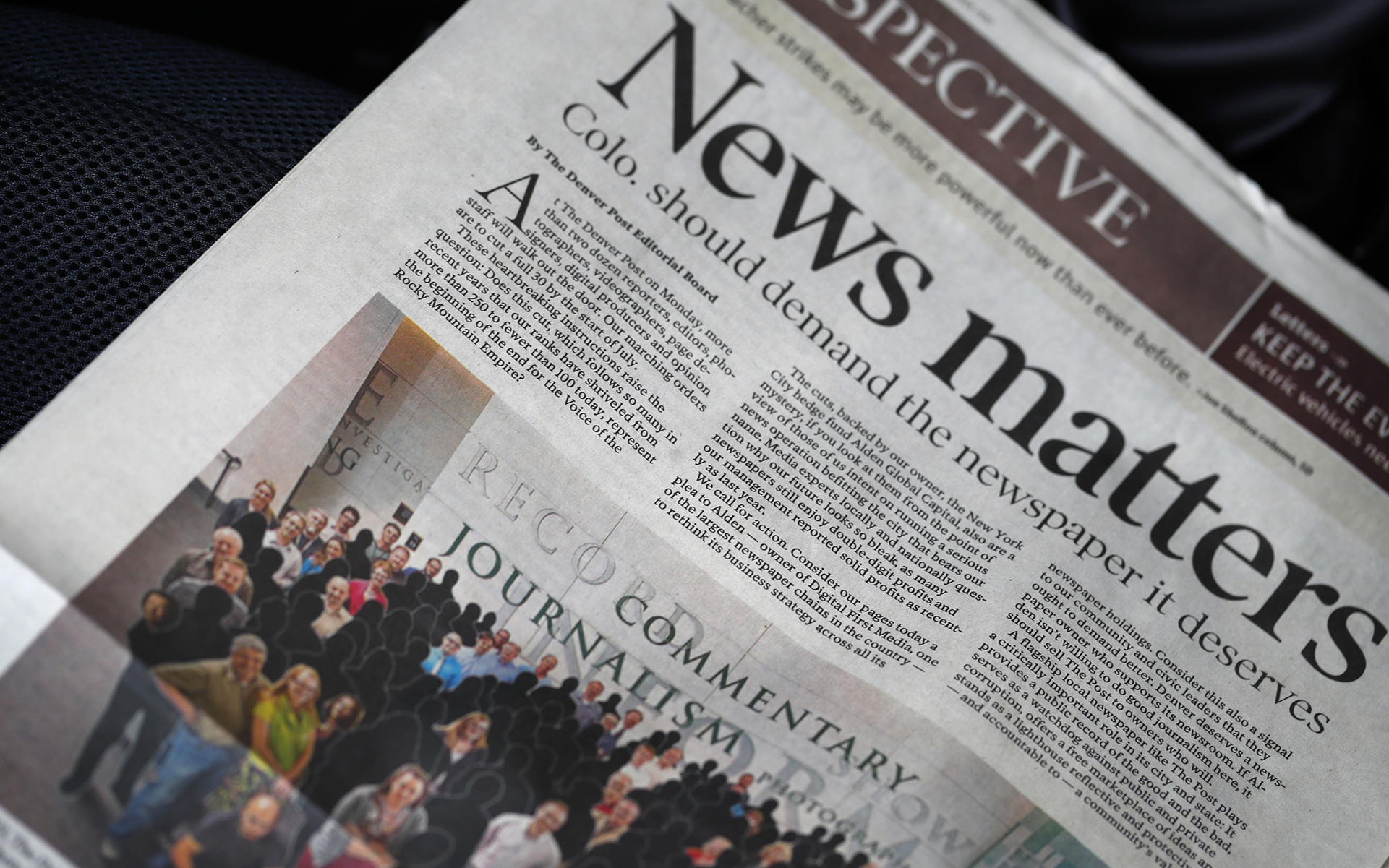 This April 21, 2018, photo shows the front page of the Perspective section of The Denver Post from Sunday, April 8, 2018, in Denver. The Post’s cry for help in the form of an editorial pleading for new ownership resonated nationally. Its owner is called Digital First Media, which is controlled by a New York-based hedge fund known as Alden Global Capital. Digital First Media has made deep cuts in several newspapers across the country. The Post’s editorial has also led Colorado business, government, and philanthropic leaders to start discussing if they could buy the Post or start an alternative publication to take its place. (David Zalubowski/AP)
Reports out of Colorado this morning claim the Denver Post has eliminated all editorial positions at its trailblazing cannabis vertical, The Cannabist. Jake Browne, the managing editor of Colorado-based Sensi Magazine, posted the news on Twitter:

(THREAD) One of the great experiments in journalism is, for all intents and purposes, dead today. The Denver Post's marijuana vertical, The Cannabist, has cut all editorial staff and will replace them with bots. This is the story of stupid, stupid hedge funds.

Reached by phone, Denver Post editor Lee Ann Colacioppo said she was unable to confirm the report. “We don’t talk about personnel decisions,” she told Leafly.

Asked about the future of the Cannabist itself, Colacioppo said, “We’re going to keep to the care and feeding of it. There will be stories posted. We’re not killing The Cannabist, is what I’m saying.”

Another employee, who did not give his full name, said the number of employees who work on The Cannabist was relatively small. “I don’t know the exact number of people on staff for The Cannabist, but I wouldn’t imagine it’s more than four,” he said. “I do know one person is leaving today. One person’s last day was two days ago.”

Some predict that the site going forward may longer produce original content:

Holy shit. The Denver Post has reportedly cut all of the The Cannabist’s editorial staff. Site will continue, but only as an aggregator. Big blow to marijuana journalism scene…https://t.co/axIfnCp4by

Leafly has reached out to The Cannabist’s current editor, Alex Pasquariello, whose last day at the paper is today. We’ll update this story as more information becomes available.

“I am absolutely gutted today,” says Baca, who founded Grasslands: A Journalism-Minded Agency in early 2017 after resigning from The Post, where he worked as a reporter, critic and editor for 15 years. He continued:

“We were so lucky to know The Cannabist as we did, and The Denver Post was lucky that we caught this lightning in a bottle during those historic days. We avoided the blind, pro-legalization activism of publications like High Times, and we also were an objective news source to counter prohibitionist misinformation that had plagued so much of the mainstream media’s irresponsible coverage of cannabis throughout the last eight decades.

“But it’s devastating to have helped create a news and culture site that changed the way so many people, journalists included, talked about marijuana—and to watch it fall apart, especially now that legal cannabis is increasingly becoming the law of the land. Now more than ever, we need serious journalists covering these state-legal marijuana markets, but this trend is not encouraging, as we’re also seeing staff reductions at the San Francisco Chronicle’s Green State vertical and elsewhere. If The Post’s most recent staff reduction broke my heart, which it unquestionably did, this news about The Cannabist losing its dedicated staff is thoroughly drubbing the rest of my internal organs with a meat tenderizer.

“These layoffs are putting The Cannabist on life support and destroying The Post’s ability to comprehensively cover Colorado, and it is entirely to blame on Alden Global Capital, the black-hearted hedge fund that owns Digital First Media and 100 American newspapers, including The Post. These vulture capitalists are literally hated throughout Denver, and while everyone from Gov. John Hickenlooper and Mayor Michael Hancock stands in support of The Post, we need to continue to let Alden Global Capital know that they are not welcome in Colorado, and they need to sell The Denver Post to a more responsible owner who will finally curb this undemocratic bloodletting.”

Leafly will continue to follow this story as it unfolds. For now, the news has sent a wave of disappointment through the cannabis media.

There are few dedicated cannabis reporters at a time that the beat may be more important than ever. Much of the country is becoming legal. The public and government are weighing a lot of complicated and conflicting information about cannabis. Who will make sense of it?