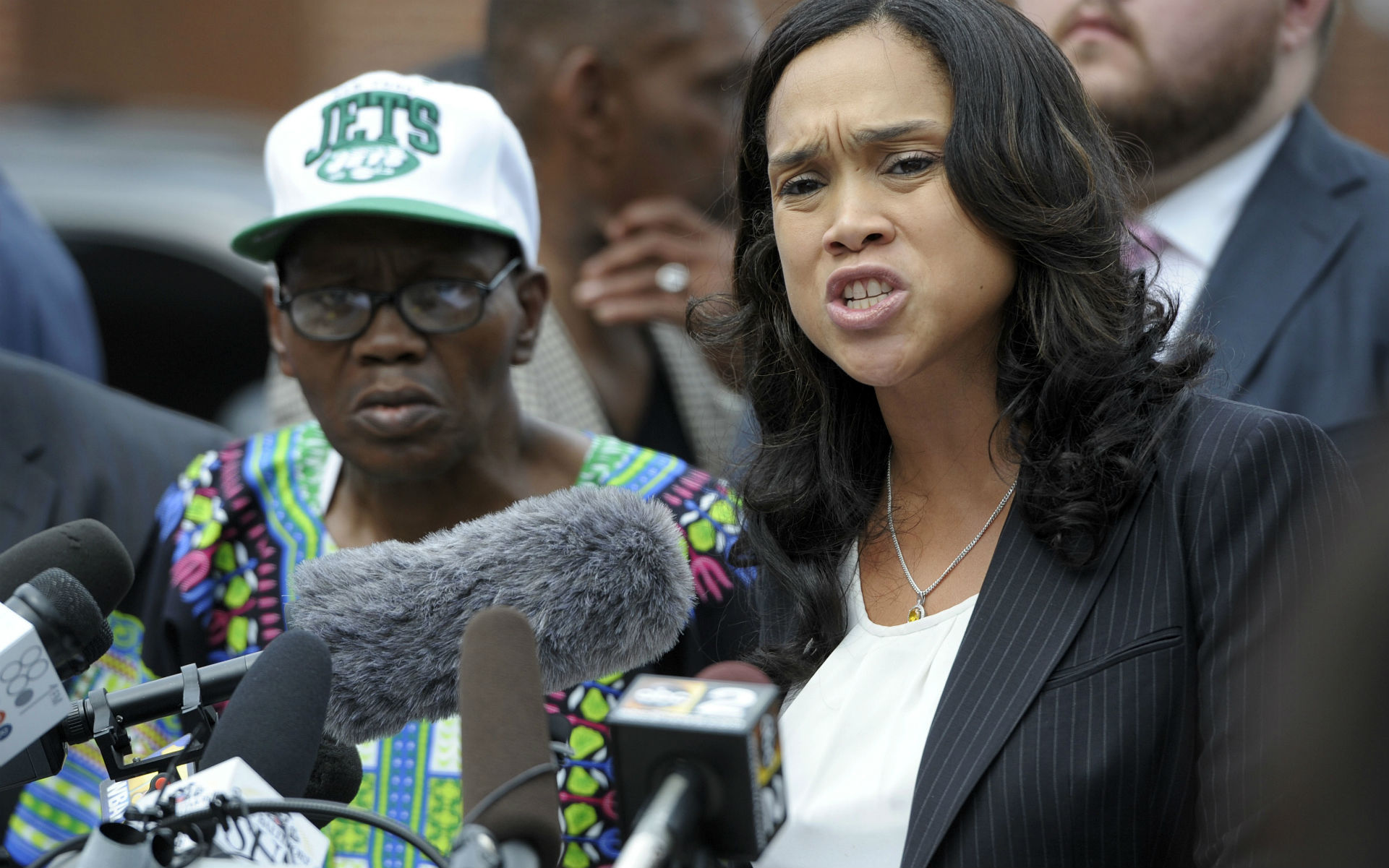 In this July 27, 2016 file photo, Baltimore State's Attorney Marilyn Mosby, right, holds a news conference near the site where Freddie Gray was arrested after her office dropped the remaining charges against three Baltimore police officers awaiting trial in Gray's death, in Baltimore. Mosby will no longer prosecute any marijuana possession cases, regardless of the quantity of the drug or an individual’s prior criminal record, authorities have announced. (Steve Ruark/AP)
BALTIMORE (AP) — Baltimore’s top prosecutor has filed a rarely used legal petition intended to vacate 3,778 convictions for cannabis possession, arguing an extraordinary legal strategy is necessary to “right an extraordinary wrong.”

In a highly unusual “Maryland v. Maryland” filing in state court, State’s Attorney Marilyn Mosby used a petition called “writ of error coram nobis” that allows a court to reopen cases when substantial error is found that wasn’t apparent in initial judgments. The petition, if granted, could wipe out thousands of cannabis possession convictions.

Mosby’s arguments are based on what she paints as an opportunity to achieve retroactive justice by acknowledging racial disparities in how pot possession cases over years were policed and prosecuted in Baltimore, a city under a federal oversight program due to discriminatory and unconstitutional policing.

“The sordid history of marijuana prohibition lies in ethnic and racial bigotry,” she writes in the filing, which notes that racial disparities in possession arrests continue to exist in majority-black Baltimore even after Maryland’s 2014 decriminalization of amounts less than 10 grams.

Mosby’s actions are part of an ongoing national shift with the way criminal justice functions regarding marijuana, which is allowed for some form of medical use in most U.S. states even as it remains illegal under federal law. Simple pot possession is a crime prosecutors in some other American cities including New York, Philadelphia and St. Louis won’t pursue.

Her court petition comes the same week she announced her office will no longer prosecute any cannabis possession cases, regardless of the quantity or an individual’s criminal record. She argued that limited resources were needed to address more significant crimes in a U.S. city grappling with chronically high violent crime rates and no shortage of dangerous drug syndicates.

Some have dismissed Mosby’s moves this week as a kind of stunt, arguing that Baltimore essentially stopped prosecuting simple cannabis possession cases years ago. Thiru Vignarajah, an ex-Maryland deputy attorney general who unsuccessfully challenged Mosby in last year’s primary for Baltimore’s state’s attorney job, said that only 78 out of more than 1,100 possession cases actually went forward since 2014.

“Ending prosecutions does not end arrests & changing policy requires partnership — without the police, this is just hollow grandstanding,” he tweeted.

She hasn’t gotten immediate buy-in from Baltimore’s acting police leader, who notes officers are sworn to enforce existing laws made by lawmakers. Interim Commissioner Gary Tuggle stressed that his officers will continue to make arrests for illegal marijuana possession “unless and until the state legislature changes the law regarding marijuana possession.”

Tuggle will soon be replaced by New Orleans Police Superintendent Michael Harrison, who is starting as Baltimore’s acting commissioner on Feb. 11.

Meanwhile, the city’s mayor, Catherine Pugh, said she was supportive of what she believes Mosby is trying to address while also stressing that drug dealers fuel violence. She urged state lawmakers to “look carefully at these issues” to figure out a unified approach.

Harford County Sheriff Jeffrey Gahler said: “I wanted to be sure the citizens of Harford County understand, this latest disappointing action of the City State’s Attorney has no impact here. We will continue to enforce the State’s laws in regards to marijuana possession because that is what we are sworn to do.”

In a phone interview, University of Baltimore law professor David Jaros said Thursday that it is not yet clear whether Mosby’s decisions might change Maryland’s conversation about marijuana and criminal justice in a productive way.

“It’s political theater if all it does is get your name out there and nothing changes. But if its politics that promotes change, it’s something different,” he said.

Jaros pointed out that one criticism of Mosby is that she positions herself among America’s “progressive” city prosecutors but some argue they haven’t seen nearly enough progressive policies coming from her office.

“This is a legitimate move that is part of a move across the country that she is now aligning herself with. And I think it’s a productive move. But whether or not it’s a panacea I think is a very legitimate question given there weren’t a large number of these cases going forward,” he said.