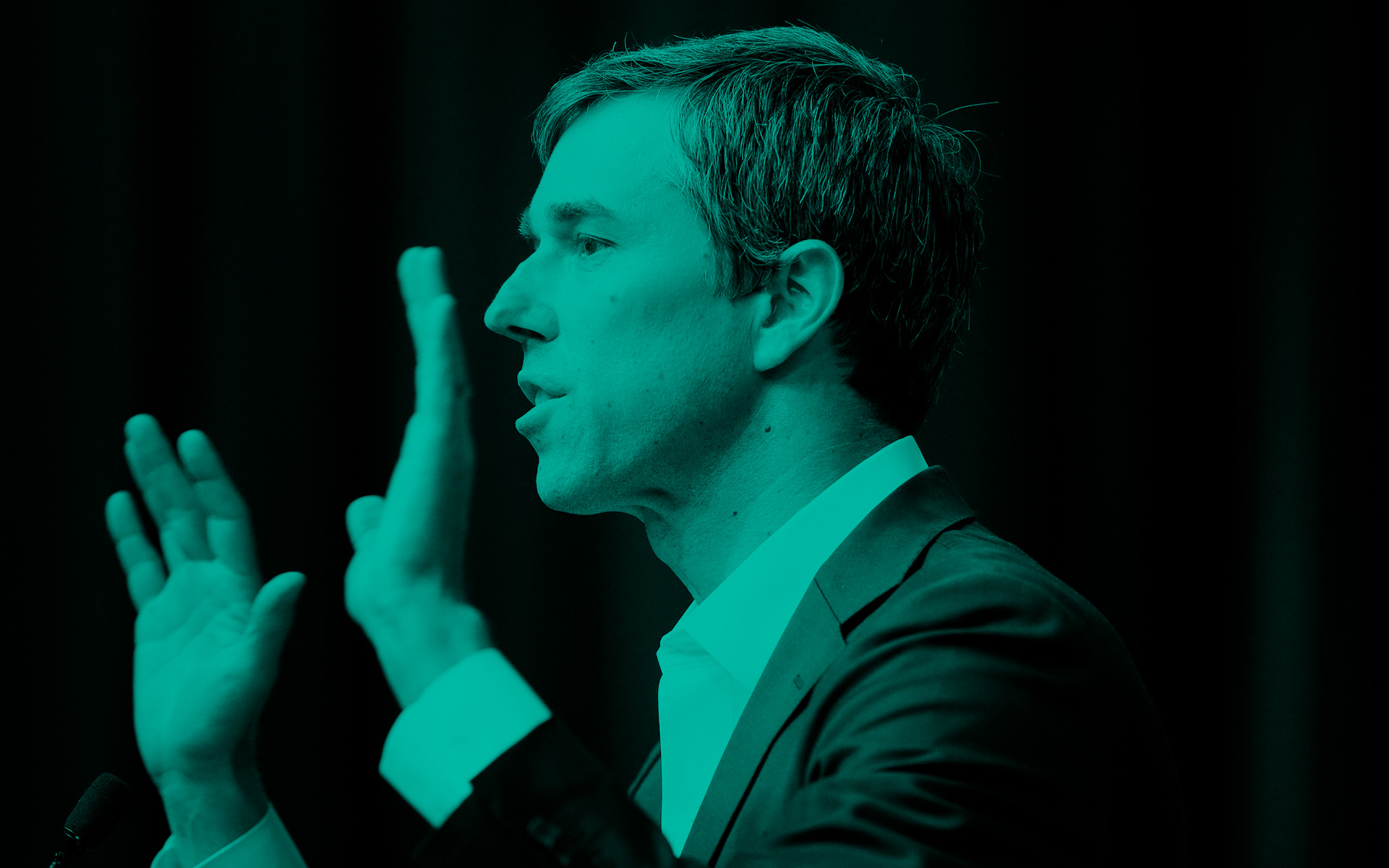 Democratic presidential candidate and former Texas congressman Beto O'Rourke got his start on the El Paso city council. When a Congress member squelched a local debate on drug reform, O'Rourke ran for his seat—and won. (Seth Wenig/AP)
When Beto O’Rourke first publicly called for “the repeal of ineffective marijuana laws,” a large majority of Americans still disapproved of legalization. Colorado and Washington were three years away from becoming the first states to actually pass such a law. And most politicians living in deep red states still considered the issue a classic “third rail” of the left.

So what convinced O’Rourke—currently a top-tier contender in the Democratic presidential primary—to take such a controversial issue by the horns?

He looked across the border.

A Tale of Two Cities

Beto O’Rourke lives in El Paso, Texas. His house is close enough to the US-Mexico border to see the troubled town of Juarez from his front porch. While he served on its city council (2005-2011), El Paso routinely ranked among the safest places in the United States, while Juarez was once pegged as the most violent city in the world.

In 2009, with little fanfare, O'Rourke introduced a city council resolution calling for the end of cannabis prohibition. That ultimately sparked his career.

Certainly it was no secret that Mexico’s steady descent into a Narco-state was responsible for all of that carnage in the streets of Juarez. And yet few politicians on O’Rourke’s side of the border wanted to talk about how US drug policy created the conditions and incentives for the rise of massive, destabilizing drug cartels, or what can realistically be done to stop them.

So in January 2009, with no fanfare and little notice, O’Rourke introduced a resolution to the city council calling for an end to cannabis prohibition and the beginning of an “honest, open national debate on ending the prohibition of narcotics.”

The resolution passed 8-0, and the mayor of El Paso appeared ready to sign it. At which point Sylvestre Reyes—a conservative Democrat, a former border patrol guard, and El Paso’s congressional representative—sent a letter to the mayor, calling on him to veto the measure.

Both in his letter and in personal lobbying calls to every member of the city council, Reyes made clear that passing the resolution would risk swift and harsh reprisal, including cuts to federal funding for local law enforcement and other community programs.

The mayor responded by vetoing the resolution. Four city council members then changed their positions to “no,” quashing any hope of overriding the veto. O’Rourke told the local El Paso Times newspaper that it was “a sad day in America, when you are threatened for wanting to have an open debate on an issue that is affecting our country and our region.”

O’Rourke grew so incensed at Reyes (a fellow Democrat) for undermining his resolution that he vowed to run against him for Congress. Which he did in 2013, in a primary campaign where cannabis legalization was a top tier issue. That’s how the whole thing started. And that’s how it ended, with Beto O’Rourke headed to Washington, DC, and Silvestre Reyes going down in history as the first American politician to lose his job for being blindly devoted to the War on Drugs.

'We stand a better chance of keeping kids from using marijuana if it is sold by regulated businesses instead of by teenagers on street corners.'
Beto O'Rourke, 2013

“We stand a better chance of keeping kids from using marijuana if it is sold by regulated businesses instead of by teenagers on street corners and middle school playgrounds,” O’Rourke wrote to supporters shortly after arriving in Congress. “Regulating and taxing the sale of marijuana would limit bloated black market profits from empowering murderous criminal enterprises that have grown too powerful in many U.S. neighborhoods and in neighboring Mexico.”

In hindsight, it’s clear that O’Rourke—a talented, ambitious politician—had paddled out in front of a massive wave of support for reforming America’s horrifically unjust laws against cannabis. He was then clever enough to keep paddling. Which helps explain how he went from an obscure local politician to a serious contender for the presidency in just six years.

And while seemingly every 2020 Democratic presidential candidate this side of drug war dinosaur Joe Biden has now come out in favor of cannabis legalization, none can boast O’Rourke’s bona fides on the issue. Nor can they match his larger vision of ending the War on Drugs as we know it, a bold and potentially transformative proposition that seems to rank among the top political priorities of a man frequently criticized for being light on policy.

“Please Give Me Refuge”

While there’s many legitimate progressive concerns about O’Rourke’s voting record in Congress, anyone doubting the depth of his conviction when it comes to rethinking drug policy need only listen to his ongoing series of interviews with Dean Becker, host of Drug Truth Network, an independent media production organization “dedicated to exposing the fraud, misdirection, and wastefulness of the ‘war on drugs.’”

O’Rourke first became a recurring guest on Drug Truth Network shortly after his city council resolution went down to a veto. In the decade since, he’s returned many times, including during his recent run for the US Senate against Ted Cruz.

Listening in to these conversations, it quickly becomes clear that Beto O’Rourke sees the War on Drugs for what it is—a dismal failure that corrupts institutions, incentivizes violence, fills prisons, wastes resources, and decimates lives and even whole communities, particularly among the poor and people of color, all while drugs remain readily available.

In a 2013 DTN interview, O’Rourke marveled that America represents just 5% of the world’s population, while consuming 25% of its illegal drugs. Most US politicians never talk about how this hyper-demand gives rise to a sophisticated, blood-soaked, illicit international supply chain. But Beto does, in the starkest terms, on episode after episode of Drug Truth Network:

“This volume of drugs and cash and weapons breaks down the rule of law… It creates the conditions that allow for criminals to operate with impunity. It allows them to be able to hire young otherwise hopeless men who don’t have an education, and don’t have job prospects, into a very lucrative even if short-lived, violent and dangerous, deadly career in these drug and criminal syndicates.

It allows these criminals to purchase politicians and justice and remove it from the common person. You can have no more poignant example of this than a seven-year-old child making a one thousand mile plus journey through Mexico and literally knocking on the front door of the United States down in the Rio Grande Valley in Texas and saying, ‘Please let me in. Please help me. Please shelter me. Please give me refuge from the violence in my home town, in my home country.'”

It’s time to end the war on drugs. That starts by ending the federal prohibition on marijuana.
— Beto O’Rourke (@BetoORourke) September 21, 2018

In a later 2018 DTN interview, O’Rourke talked about the damage done on the American side of the border, in particular when it comes to “mass incarceration” of poor and minority communities:

It costs $22,000 per year to keep someone locked up, and we’re also locking up their earning potential, their ability to finish their education, their ability to raise their family, their ability to do whatever they’re supposed to do in their lifetimes… And so we can either continue to do that and expect a different result, or we can do the right thing and end this war on drugs, and end the prohibition on marijuana, and make sure that we live up to our true potential as a country and our highest ideals and values.”

O’Rourke is often labeled a moderate. But at times he sounds like a long-retired punk rocker, or a one-time teenage member of a legendary OG hacker group known as Cult of the Dead Cow. Which he is. (Among the hackers he used the handle Psychedelic Warlord.)

For the record, he’s never admitted to personally using cannabis and has denied ever trying LSD. Though presumably he caught a contact high the night he shared the stage with fellow Texan Willie Nelson at one of his campaign rallies. Beto even sat in with Willie and the band on a rendition of the Red Headed Stranger’s classic anthem “On the Road Again.”

“I like the way he goes about trying to get elected,” Nelson explained to Rolling Stone. “He’s been to every county in Texas. He’s knocked on every door. And that’s hard work.”

O’Rourke will have to log a lot more road miles if he wants to win the presidency. Here’s hoping that if he wins, he invites Willie to perform at the inauguration, and then lets him smoke another joint on the roof of the White House.