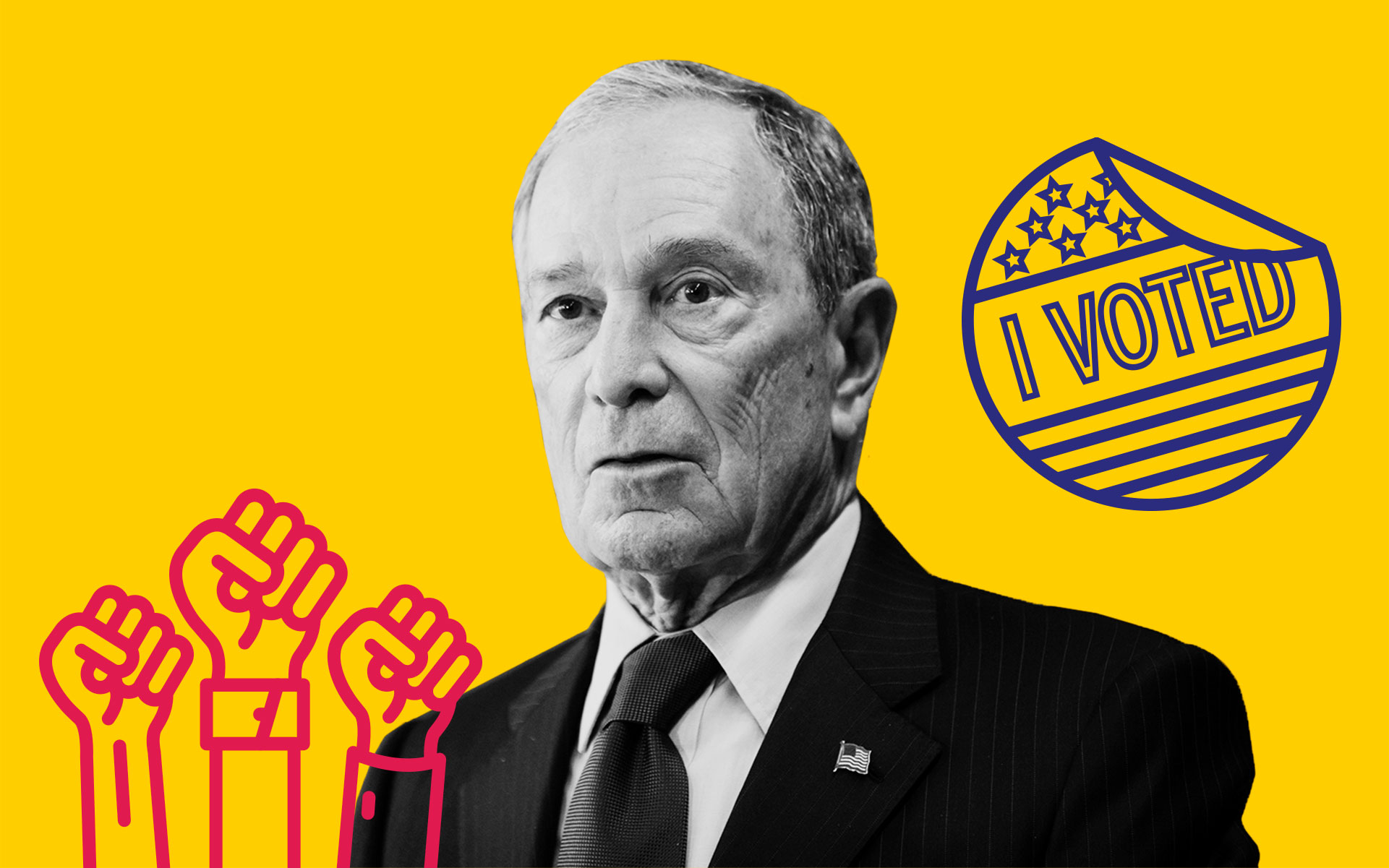 Joe Biden worked hard to be the worst Democrat on cannabis. Bloomberg to Biden: "Hold my beer." (AP Photo/Matt Rourke)

Now that former New York City Mayor Mike Bloomberg is considering a run for the Democratic presidential nomination, his policies and past actions on cannabis are going to come under scrutiny. In a party and a nation that now solidly embraces legalization, it’s not going to go well for Mayor Mike.

During Bloomberg’s first run for New York City mayor in 2001, an enterprising local reporter casually asked if he’d ever had occasion to partake of some marijuana. In a flippant (read: honest) reply, Bloomberg indicated that not only had he consumed an undisclosed amount of cannabis in the course of his life, he found it to be a rather pleasurable experience.

When Mike Bloomberg became mayor, NYC cops made 1,000 cannabis arrests per year. By the time he left office, that number had jumped to 25,000.

Presumably, the billionaire businessman turned novice politician felt a twinge of regret the moment that overshare left his lips. But it’s also possible that Bloomberg’s off-the-cuff response was far more calculated than it appeared—a dog whistle aimed squarely at millions of cannabis consumers living in the Baked Apple, right as they had to decide who to vote for in the race to succeed Mayor Rudy Giuliani.

Things were bleak back then for Gotham’s pot smokers.

When Giuliani first came into power, the entirety of New York City saw fewer than 1,000 marijuana possession arrests per year. But as “America’s Mayor” prepared to leave office, the same city produced 25,000 such arrests annually, and they vastly disproportionately targeted the poor and communities of color. The ramp-up was part of a since discredited “broken windows” approach to policing that also included stopping-and-frisking around 100,000 citizens from low-income and minority communities every year. “I smell marijuana” was often used as the handiest pretext for these everyday harassments.

For those found in possession of personal amounts of cannabis, an arrest frequently involved getting taken into custody, booked, strip searched, and then held for hours or even days before seeing a judge. So it would have made a lot of electoral sense for Candidate Bloomberg to show some solidarity with the cannabis community as the mayoral vote approached. Particularly since he was running as a Republican in a deep blue city against a progressive challenger who opposed the NYPD’s racist war on marijuana.

It’s impossible to know if Bloomberg’s wink towards weed won him any new supporters in the final stretch, but in an election held just weeks after the terrorist attacks of 9/11, he did barely squeak into office.

What happened next should serve as a warning to anyone considering Mayor Mike as the savior of the Democratic Party in 2020. Because when it came to cannabis policy, he took everything Rudy Giuliani was already doing wrong and made it much worse.

Not long after Bloomberg’s inauguration as mayor, the National Organization For the Reform of Marijuana Laws (NORML) spent $500,000 to plaster New York City with this message:

At the time, NORML founder Keith Stroup said the ad buy was meant to commend the new mayor for his honest statement, and create an opportunity for open dialogue about changing the city’s approach to enforcement.

“We’re not asking Mayor Bloomberg to change the law,” Stroup said. “We’re simply asking him to end the double standard by which ’open container’ violations [for alcohol] are handled with a ticket and a fine, while ’open smoking’ results in arrest and jail.”

As it turned out, Bloomberg had other plans.

“I’m not thrilled they’re using my name,” he said when asked about the NORML ad at a press conference. “I suppose it’s that First Amendment that gets in the way of me stopping it.”

Yup, that pesky First Amendment, always giving freedom of speech to the wrong people. And that darn Fourth Amendment, protecting them against unreasonable searches and seizures by the government.

It was, in fact, the Fourth Amendment that federal judge Shira Scheindlin cited in 2013 when ruling that the NYPD’s stop-and-frisk campaign, encouraged by Mayor Bloomberg, violated the constitution. During his time as mayor Bloomberg oversaw a sixfold increase in the number of stops by police, and a 50% increase in the number of arrests for simple possession of marijuana.

So yeah: Bloomberg took everything Giuliani did wrong and made it way worse.

Has he evolved? That’s a hard no

A lot has changed in the nearly six years since Mike Bloomberg’s time as mayor came to an end on December 31, 2013. The very next day, in fact, the first ever recreational cannabis stores in the United States opened in Colorado. Since then 12 more states have followed suit, and national support for legalization has continued to reach record highs, particularly in the states where it has already been implemented.

Nearly every other Democratic contender has embraced legalization. Bloomberg says 'we've got to fight it.'

So given all the new information that’s come to light, and given the fact that he may soon jump into the primary contest of a political party where cannabis legalization polls at 76% approval, you might think Mike Bloomberg would look for ways to pivot toward common sense when it comes to cannabis.

You would be wrong.

In a recent speech at the U.S. Naval Academy, Bloomberg called cannabis legalization “perhaps the stupidest thing anybody has ever done.” He added: “We’ve got to fight that.”

It’s tempting to create a humorous list of incredibly stupid things that “anybody has ever done” and then compare them to Bloomberg’s indefensible claim. Cheap laughs aside, it misses the point. To Bloomberg, cannabis legalization—despite its successful implementation and political popularity—remains a monumental disaster quite simply because he’s already personally subjected so many people to arrest.

He can’t admit that he was wrong on cannabis without being really really wrong, in a way that would rightly stain his reputation forever. So instead, he has convinced himself that cannabis legalization must be stupider than, say, letting a bunch of Wall Street fat cats (like him) crash the world economy in 2008 with absolutely zero arrests.

Michael Bloomberg must be aware that his out-of-step position on this issue will come up quickly upon his official entry into the 2020 Democratic Primary. With the exception of Joe Biden, all of his primary opponents support federal cannabis legalization. And even Biden now “supports decriminalizing marijuana.”

So if one of the biggest drug warriors in recent history can change his tune, how exactly does Michael Bloomberg continue to believe that legalization is the stupidest thing anyone has done? Simple. By inventing facts and sticking to them despite all evidence to the contrary.

Like when Bloomberg called medical cannabis (which over 85% of Americans now support) “one of the greatest hoaxes of all time.”

Perhaps nothing captures the utter stupidity of Bloomberg’s approach to cannabis policy than the following statement, made during a 2013 radio interview:

“Drug dealers have families to feed. If they can’t sell marijuana, they’ll sell something else. And the something else will be something worse. The push to legalize this is wrongheaded.”

Hang on. That’s worth unpacking. Bloomberg sees no place in the legal cannabis industry for the legacy growers and suppliers who operated under prohibition. He can’t even conceive of it. Instead, he assumes that your friendly local weed dealer will switch over to slinging heroin.

Which is obviously nonsense.

As is the idea that cannabis legalization will lead to more demand for heroin and thus more supply in the form of more dealers. Basically, nothing Bloomberg says about cannabis adds up. But that’s how things go once you start making up your own facts. When you’re a billionaire, they let you do it.