Sara Brittany Somerset March 6, 2018
Share
Share on Twitter   Share on Facebook
Print
This is the first in a three-part Leafly series on cannabis in New York City. Later installments will examine how the city’s prohibition market works, and what reforms need to happen next.

City Council Members Are Fed Up 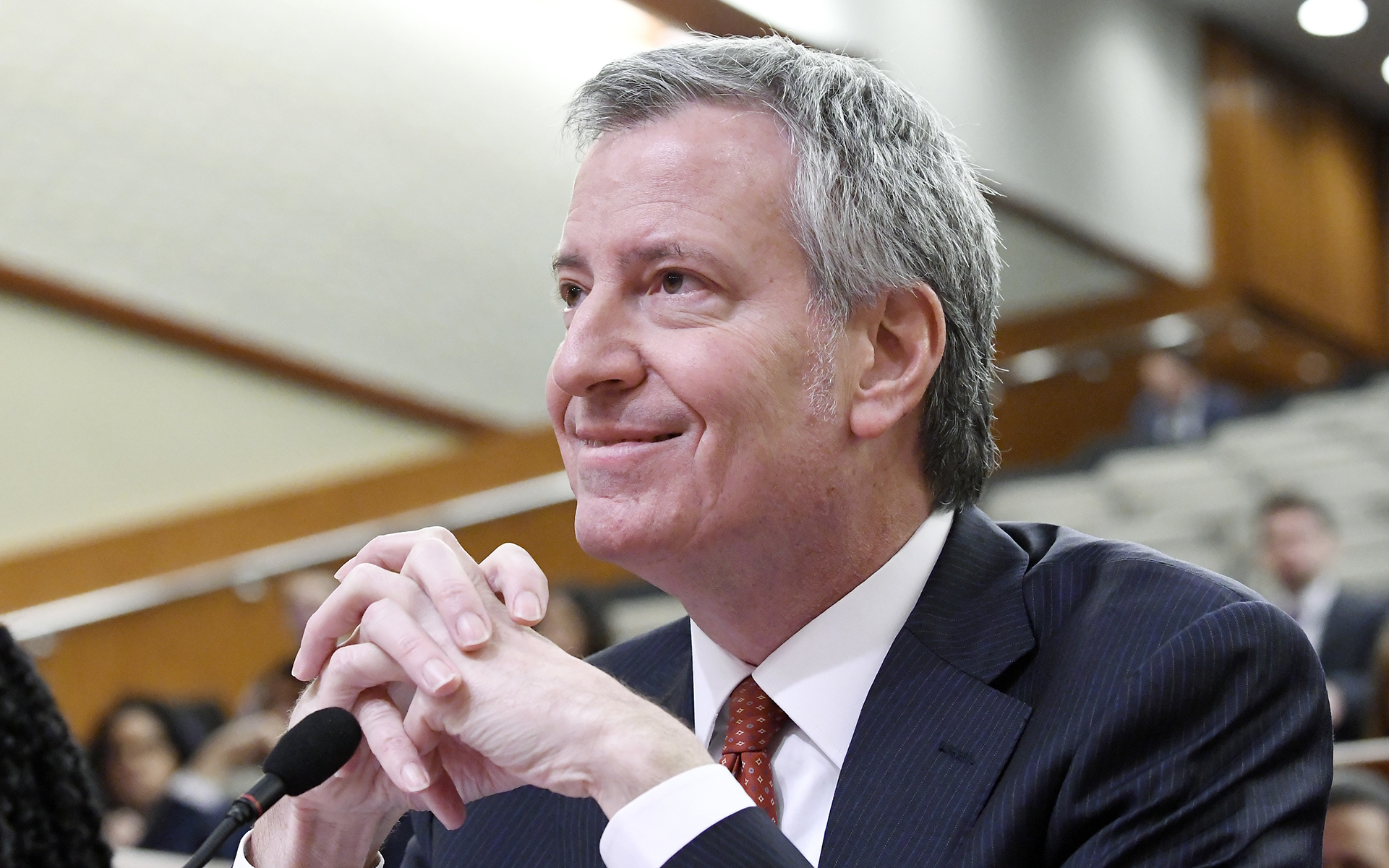 Under Mayor Bill de Blasio, 85% of the people arrested for cannabis offenses were people of color. Under Michael Bloomberg, that figure was 84%.

How can the rest of the country continue to make progress—decriminalizing in big cities, legalizing in more and more states—while New York City actually goes backwards?

That’s what members of New York’s City Council wanted to know last week. In a joint meeting of the Council’s Committee on Public Safety and Committee on the Justice System, councilmembers questioned leaders of the New York Police Department about racial disparities in the enforcement of the city’s cannabis laws. It was not a congenial affair. Councilmembers repeatedly took the NYPD to task for withholding critically important arrest data, and for the glaring racial disparities in the little data that was offered up for public scrutiny.

Councilmember Donovan Richards, head of the public safety committee, started off the session by airing data on marijuana arrests, per New York City mayor, during their first three years in office:

Politico’s Brendan Cheney brought out the differences between mayoral administrations in his article last month, which included this telling graphic: 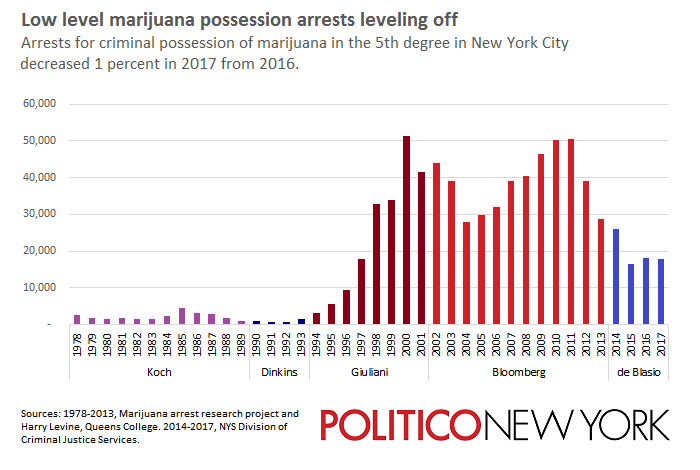 The data given to city council members, though, seemed to be oddly constrained. Dermot Shea, the NYPD’s chief of crime control strategies, explained that the data given to the council was comprised of the statistics from within the confines of the following police precincts:

Why Only Those Precincts?

Councilmember Richards’ follow-up question—”What do all these precincts have in common?”—was met with collective, laughter from the public gallery. The unspoken implication was that the precincts are situated mainly in communities of color.

NYPD’s Chief Shea mentioned that regarding arrests, the statistics are derived from the areas are where the NYPD receives the most complaints, via incoming calls to 911 and 311. (311 is a non-emergency number that connects callers to city services, including the police.)

“I’m not saying I don’t trust your word,” Richard then told Shea, “but let’s go through the stats. We’re trying to determine where the calls that are specifically related to marijuana are coming from.”

Let’s Look at the Data

According to a survey of city residents, in the past year, 33% of whites, 32% percent of blacks and 27% of Latinos in New York City have acknowledged consuming marijuana.

'Are blacks the only ones using marijuana in New York City?'
Councilmember Donovan Richards

Noting those figures, Councilman Richards, who is black, asked: “Are blacks the only ones using marijuana in New York City? It’s pretty even across the spectrum of marijuana use. So why is so much enforcement happening in communities of color?”

Chief Shea dodged the question. He said that in 2014, the city made a legal differentiation between ‘using marijuana’ and ‘burning marijuana.’ Since then, he said, 90% of arrests for marijuana are for ‘burning.’

“Communities of color are not the only ones ‘burning,’” he said.

Under Mayor de Blasio, 85% of the people arrested for cannabis offenses were people of color. Under Mayor Bloomberg, that figure was 84%.

“If the administration is serious about changing the racial disparity of arrests,” said Richards, “we are not seeing that.”

Chief Shea defended the NYPD’s arrest statistics. “We are following specific complaints from the public, regarding marijuana burned in public view.”

He added, “We are probably the most transparent we have ever been as a department, as an administration.”

This seemed hard for Council members to believe, because no data was presented by the department to corroborate their claims, despite repeated prior requests for said data to be presented before the hearing. 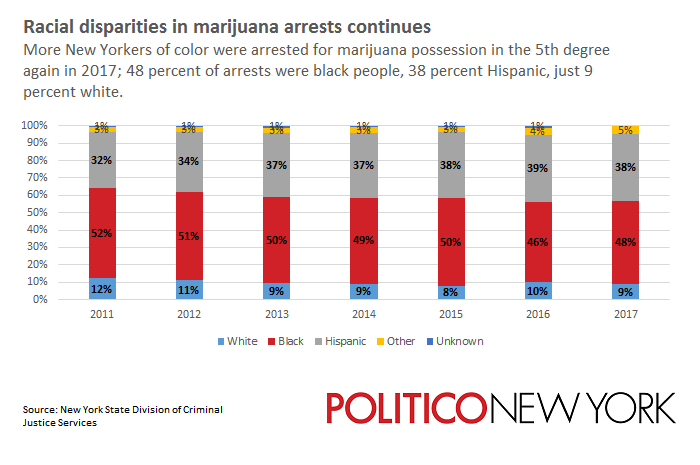 911 Calls: Only in Communities of Color?

Richards was having none of it. “These numbers do not show that we are making progress. Arrests have gone down, but the disparity of where these arrests are occurring, are not transformational.”

'Until you show me the data we requested that shows the correlation between 311 calls, I just cannot accept this justification for this incredible disparity.'
Councilmember Richards

“The department isn’t serious about addressing disparities in communities of color. Many of our young, black, and brown men and women are still getting summonses over marijuana, while other states are legalizing. It is a disgrace.”

“Following up on 911 calls, I refuse to believe in a city of eight million, that the only people calling 911 are in communities of color. You can smell it in City Hall Park on some days. We have to do better. Marijuana should not be a life sentence,” he said.

Richards said he wants to analyze the aforementioned 911 calls and hear the complaints.

Chair of the Committee on Justice System, Councilman Rory Lancman concurred. “Where is the data?” he asked Chief Shea.

Councilman Lancman voiced his concern that if marijuana enforcement is driven by 311 calls, relying on 311’s extraordinary disparity is troubling.

“We asked the department to produce the 311 data we heard Police Commissioner Bratton talk about, and we did not receive it either before the hearing or at the hearing. We have been asking for it in emails since the middle of February because this is how the department justifies a seemingly unjustifiable disparity. You can’t produce any documentation to support your assertion that the most 311 calls are coming from these communities. Until you show me the data we requested that shows the correlation between 311 calls, I just cannot accept this justification for this incredible disparity.”

'There is no magic button to produce this report. We have 15 different key words to search: pot, weed, etc.'
Dermot Shea, NYPD official, explaining the lack of data

At that point, Lancman called for the hearing not to be concluded, but to be adjourned until the data the NYPD are relying on is provided, “so we can have a real conversation about this extraordinary impact on communities of color,” he said.

“Either way you have provided us with neither data,” Councilman Rory Lancman retorted.

“Agreed, and no one is more frustrated than me,” said Shea. There is no magic button to produce this report. We have 15 different key words to search: pot, weed, etc. We have seen significant jumps, which coincides with a drop in arrests. I have to be responsive to the woman walking into her building with her kids, having to walk through three people smoking pot or shooting dice or whatever it is. We have to balance out cutting arrests with overall public safety. The data is far from perfect. If you ask three different people, you will get three different interpretations, and none will be wrong,” Chief Shea explained.

It is highly doubtful that police officers would compile their arrests reports using any slang terms for cannabis, but the council let that excuse pass, in favor of interrogating the top brass along racial lines.

Councilman Rory Lancman, “So if the data is shaky, where is the disparity coming from?”

Again, this line of direct questioning was sidestepped. “We are trying to revolutionize how we police New York City with our build a block meetings. We are responding to complaints that are coming to us.”

Councilman Rory Lancman persisted, “Any other factors involved?  Have you considered that there may be bias in the NYPD?”

Chief Shea was evasive once more. “We went to great lengths in 2014 when we revised our policies. We created different ways to process possession and burning versus smoking. It’s not a license to smoke outside though.  Deployment issues come into effect. Who smokes it outside? I don’t have racial data. When we deploy officers, if they’re smoking outside, we enforce existing law.”

Councilman Anton concurred. “I want to see how many people in a gentrified community are being arrested.”

Chief Shea said he had no data to support that or reason to believe that.

“221-10 marijuana arrests are not going to Rikers Island. There could be other factors, existing warrants, etc. Someone smoking a marijuana cigarette is not going to see a sentence. We are in lock step with prosecutors about that.  Nearly nine out of 10 arrests are for smoking or burning outside. The perpetrators may be wanted for other crimes; they may not have ID on them. There are other factors. That is why we created this differentiation in 2014.” Chief Shea said.

‘No Position’ on Legalization

When asked specifically out of the 17,500 arrests in 2017, how many had mitigating factors, such as possession of a handgun, Chief Shea admitted,  “I don’t have the data, but it’s not going to be an ancillary charge. It will be the top charge.”

Council member Donovan Richards asked, “Are you aware of the task force appointed to analyze legalization?”

Councilwoman Rose was also highly skeptical of the Chief’s remarks. “I have a hard time believing that calls to 311 are driving the arrests. Nobody is getting summonses for public burning. They are getting arrested for public burning. By the time your officers arrive on the scene, unless someone is smoking an extra long burning blunt, how will you get there in time to find the person who was smoking?”

Councilwoman Rose, who represents an area of Staten Island, then zeroed in on her turf, “I guess we aren’t smoking marijuana in Staten Island because I didn’t hear any stats. Are the arrests disproportionately in the North Shore of Staten Island, in the confines of the 120 or 121 precincts?” she asked.

There is a pattern of collecting data from communities of color, rather than affluent or gentrified neighborhoods in Staten Island.

Councilman Richards tried to manterrupt Councilwoman Rose more than once. However, as one of the few women in the meeting, she insisted on getting her points across. She was the only council member to address what many attendees expected to be a focal point of the meeting: the rape of a woman in NYPD custody, who had been arrested on marijuana possession charges.

“A woman was raped and violated in the custody of NYPD [after being arrested for possession of marijuana]. Resolution 177 was proposed to include in the penal law 130.05, that individuals in police custody are categorically incapable of giving consent,” she said.

“That’s Not True, for the Record”

Although the topic of racial disparity was raised by every council member in attendance, the exchange between Councilmember Jumane Williams and Chief Shea became particularly heated.

When Councilmember Richards asked if someone could become a police officer if they have smoked marijuana in the past, Chief Shea replied, “Yes you absolutely can.”

Many of the remarks were met with outright laughter, such as when Chief Shea said there is no expectation of productivity goals or arrest quotas.

Near the end of the hearing, Councilmember Anton summarized, “In 10 years we will look back on this conversation and laugh, because New York will be a legalized state.”

Coming tomorrow: A look at how New York City’s cannabis consumers obtain their products in the nation’s largest prohibition market.