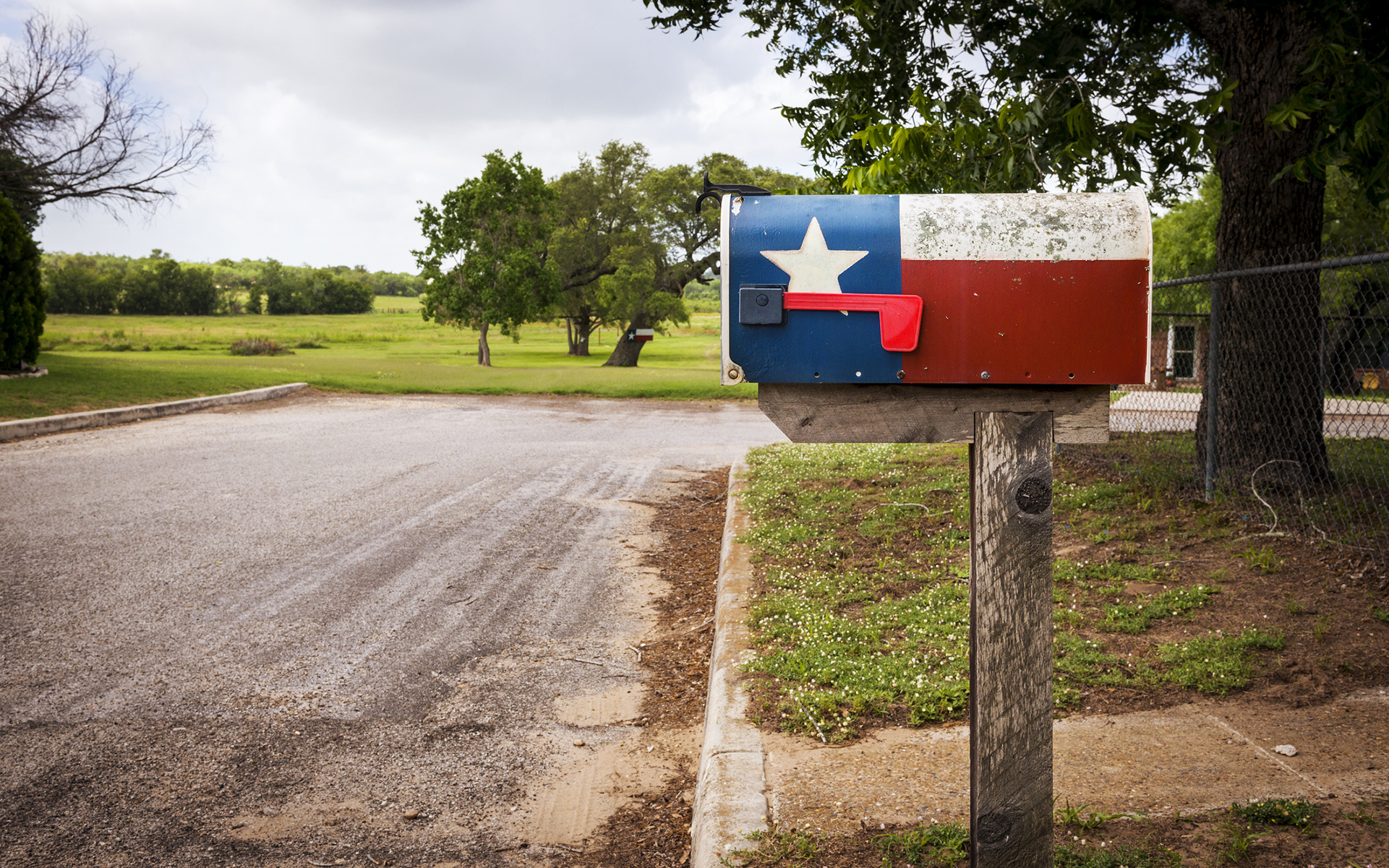 Mailbox painted with the Texas Flag in a street in Texas, USA
This coming Thursday, February 23, the Texas Department of Public Safety (DPS) will start accepting applications from companies to grow and process cannabis under Texas’s new Compassionate Use Program, which regulates the production and sale of low-THC, high-CBD medical cannabis. The agency is scheduled to conditionally approve at least three dispensaries by May. But because of a quirk in the bill’s language, medical marijuana advocates worry that there may not be any patients to purchase the dispensaries’ products.

Texas starts taking license applications this week. But there may not be any patients.

The Texas Compassionate Use Act, signed by Governor Greg Abbott in 2015, allows physicians to “prescribe” low-THC, high-CBD cannabis to patients with epilepsy. Groups like Marijuana Policy Project (MPP) and the National Organization for the Reform of Marijuana Laws (NORML) say that’s impossible. The DEA, which licenses physicians to prescribe scheduled drugs, still treats marijuana as a Schedule I drug — a category reserved for “drugs with no currently accepted medical use.” And a DEA manual makes it clear that doctors can’t prescribe Schedule I substances.

Defenders of the law say the Texas DPS, the agency tasked with running the program, has defined the word “prescription” in a way that resolves the problem. But it’s not entirely clear how that works.

With the application deadline approaching, and the Texas DPS still unwilling or unable to answer basic questions about this issue, the Compassionate Use Act is beginning to look like the latest in a long line of flawed Southern cannabis programs.

In every state with a workable medical marijuana program, doctors “recommend” or “certify” patients for cannabis use. They do not “prescribe.” In a 2002 court case, the U.S. 9th Circuit Court of Appeals ruled that the government couldn’t punish doctors for recommending cannabis so long as they weren’t helping patients obtain it. (The Supreme Court declined to hear the appeal, so the ruling stands.)

A prescription doesn't give doctors the same legal protection as a recommendation.

Because a prescription is, essentially, an order for controlled drugs, it doesn’t provide doctors with the same protections as they enjoy for a recommendation or a certification. In 1978, Louisiana became one of the first states to legalize medical marijuana, for glaucoma and cancer patients. That law required a prescription, but the state Health Department never created a system for doctors to legally prescribe, or for patients to legally access their medicine. So the law never served a single patient.

Officials with the Marijuana Policy Project (MPP) and NORML insist the prescription language will effectively kill Texas’ efforts to create a low-THC medical cannabis program. In 2015, when the Compassionate Use Act passed the Texas Senate, MPP lobbied to fix this wording, according to Heather Fazio, a Texas spokesperson for MPP. But Kevin Eltife, the Senate sponsor for the bill, refused to consider any amendments, Fazio said.

Some companies may take the risk

One of the companies applying for a Texas DPS license is AcquiFlow. Founded in 2014 by Patrick Moran, a Texas native turned pot entrepreneur, the business touts itself as “the first open, transparent and legal Texas based cannabis company,” according to its website.

Despite the prescription problem, Moran is optimistic about the Compassionate Use Act. He argues that programs with the “recommend” language, like California’s, have too often created a gray market. He believes the Texas bill will be functional in part because State Representative Stephanie Klick, who co-sponsored the bill, works in the medical profession herself. (Klick is a medical-business consultant and a registered nurse.)

More significantly, Moran notes that the Texas DPS has defined a marijuana prescription as “an entry in the compassionate-use registry.” Since this definition “remains in the state framework,” he said, “the DEA has no authority.”

That’s Moran’s claim—but it may not be so in the eyes of the DEA. Since California passed the nation’s first workable medical marijuana law in 1996, the DEA has considered all variations of medical cannabis to be illegal and subject to federal enforcement.

State officials: Nobody knows how it works

It’s true that the DPS defines a marijuana “prescription” in relation to the Compassionate Use Act. But does this mean doctors don’t have to follow the usual rules around prescriptions? Would this wording protect them in the same way the “recommend” language does? For at least two weeks, I’ve asked these simple questions to a number of state organizations, including the Texas DPS. The answers — or lack thereof — do not inspire confidence.

I asked DPS officials if doctors would be legally allowed to prescribe–rather than recommend–marijuana, and if they would risk any penalties for doing so. Tom Vinger, a DPS spokesperson, told me via email that these questions weren’t “on point.” When asked for clarification, Vinger said the Compassionate Use Act “does not affect federal law or require the DEA to alter its enforcement practices.” He referred me to the DEA.

The Texas law 'does not affect federal law or require the DEA to alter its practices.'
Texas Dept. of Public Safety spokesman

When asked the same questions, Jarrett Schneider, a spokesperson for the Texas Medical Board, said via email that, as far as he knew, the Compassionate Use program was “still being developed.”

“Schedule I drugs are illegal,” Schneider added. For more information, he referred me back to the DPS.

I contacted the Texas State Board of Pharmacy (TSBP), which regulates the distribution of pharmaceutical drugs in Texas. Gay Dodson, Executive Director of the TSBP, told me in a voicemail that the Compassionate Use Act was “not administered by this agency.” She also directed me to the DPS.

I reached out to the offices of State Representative Stephanie Klick, who co-sponsored the bill. A spokesperson told me Bryan Shufelt, Klick’s Chief of Staff, could answer my questions. Shufelt later called to say he couldn’t do a phone interview before my deadline. When I emailed my question instead, Shufelt didn’t respond.

Brent Annear, a spokesperson for the Texas Medical Association, said he doesn’t know of any Texas physicians who have registered with the DPS to become marijuana prescribers. “Apparently no formal rules are in place to make that possible yet,” he said in an email. “Federal law prohibits writing a prescription for a Schedule One drug anyway.”

There’s a bill in the works, but…

The DPS seems to recognize the problem. In audio from a December 2015 meeting, RenEarl Bowie, Assistant Director of Regulatory Licensing at the Texas DPS, said the prescription issue was “something that will have to be addressed by the Texas legislature.”

Texas State Senator José Menéndez is trying to do just that. In December 2016, he introduced a revised medical marijuana bill that would replace the word “prescribe” with “recommend.” It’s been referred to the Senate Committee on Health and Human Services, which has yet to decide whether to give the bill a hearing, according to Heather Fazio, the Texas MPP spokesperson.

One complication: Menéndez’s bill doesn’t just change the language around prescriptions. It also removes caps on THC. It’s not clear how that bigger change will sit with conservative lawmakers. If Menendez insists on removing the THC limits — for instance, by not allowing amendments — efforts to fix the prescription language may once again fail.

One more twist in the Southern CBD saga

The American South is known for dysfunctional marijuana laws. In much of the South, cannabidiol programs don’t even allow patients to purchase their medicine in state. When Texas bucked that trend in 2015 with its Compassionate Use Act–which established licenses for the production of low-THC, high-CBD cannabis–it created a buzz in the Southern medical marijuana community.

The Texas program seems increasingly mired in problems of its own making.

Now, almost two years later, the Texas program increasingly seems mired in problems of its own making. After all, even Southern states like Alabama and Georgia — not exactly models of workable medical CBD programs — use the “recommend” language in their laws.

“The other low-THC laws aren’t that foolish,” said Karen O’Keefe, Director of State Policies at MPP.

The prescription language isn’t the only part of the Compassionate Use Act to generate controversy. Although the law originally set licensing fees at $6,000, the DPS tried to raise licensing and renewal fees to around $1.3 million in November. After an uproar, the costs were lowered slightly, to $488,520. That’s still by far the highest licensing fee in the nation, for what may be the country’s smallest and tightest market.

A couple weeks ago I called Patrick Moran, the AcquiFlow founder, to see if he was still feeling optimistic. He said he didn’t have much time to talk. In the tiny north Texas town of Gunter, the city council had approved Moran’s plan to turn a former cotton gin into a grow operation. He’d already broken ground, he said.

With the program’s rollout just on the horizon, Moran admits there’s still disagreement around the prescription issue. He thinks that concern is misguided, though. Besides, if all else fails, Moran told me he has a contingency plan. Using his hydroponic cultivation setup in Gunter, he said, he could grow herbs like basil instead.