The move took many by surprise, especially following statements by the president decrying international drug cartels and the nation’s ongoing opioid crisis. Key responsibilities of the ONDCP, after all, include reducing substance use and drug trafficking.

On Tuesday, Chuck Canterbury, the national president of the Fraternal Order of Police, which endorsed Trump’s campaign bid, sent a letter to the White House urging the administration to reconsider.

“You made very clear on the campaign trail and in your time in office that you recognize the threat posed by drug trafficking and abuse,” he wrote. “Our nation is currently facing an epidemic of opioid-related deaths. The ONDCP plays a vital role in coordinating a national strategy to fight drug trafficking and reduce illegal drug use.”

LETTER TO @realDonaldTrump @POTUS REGARDING IMPORTANCE OF THE OFFICE OF NATIONAL DRUG CONTROL POLICY pic.twitter.com/IQ1MR1kS7O

The White House budget has been delayed for several weeks while awaiting Senate confirmation of Trump’s newly appointed budget director, former US Rep. Mick Mulvaney, a Republican from South Carolina. But as soon as the Senate confirmed his appointment 51–49, Mulvaney drafted a list of proposed agencies to get the axe. Most run on less than $500 million a year, which analysts point out is a drop in the bucket in terms of government spending. In other words, the targeted list could also indicate the administration’s political priorities.

Trump has reportedly been considering former Rep. Frank Guinta (R-NH), as well as Florida Attorney General Pam Bondi, for the position of Drug Czar, overseeing the Office of National Drug Control Policy. Now that the agency itself hangs in the balance, there’s no indication of whether the position will still exist under the new administration.

Trump and Sessions Seem Focused on Cartels, Not Cannabis

The Office of National Drug Control Policy dispenses grants to reduce drug use and trafficking, and the office was allotted $30.6 billion in funding for fiscal year 2016. The office was established by the Anti-Drug Abuse Act of 1988 in order to help establish and maintain a drug-free workplace through drug assistance and rehabilitation programs, drug counseling, and drug-free awareness educational programs. 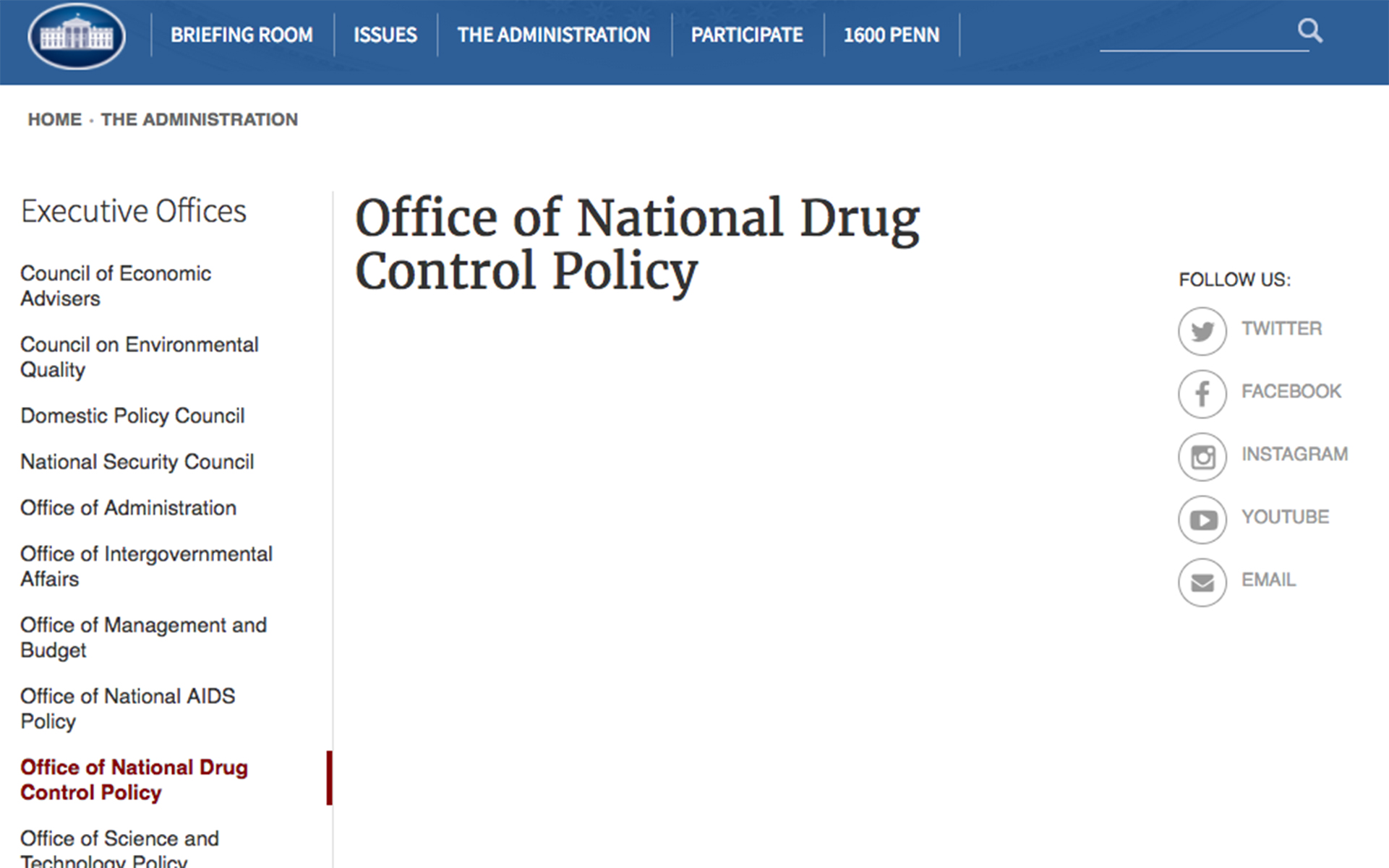 The White House website’s ONDCP page has been blank amid the controversy. (whitehouse.gov/ondcp)

Cutting the Office of National Drug Control Policy could have devastating effects on law enforcement agencies around the country as well as on the federal Drug Enforcement Administration. As Canterbury notes in his letter, one of the office’s key initiatives, The High Intensity Drug Trafficking Areas Program, would be directly affected. The program provides critical support for cooperation between state, local, and federal law enforcement. It’s seen as particularly crucial along the US–Mexico border, across which cartels often attempt to smuggle illegal drugs.

Though impacts of the cuts appear unlikely to affect state-legal cannabis operations, cutting the ONDCP could have dire and far-reaching consequences on at-risk populations. Without coordinated efforts across state lines, drug trafficking is likely to rise and the opioid epidemic in America, already at devastating levels, could languish.

In 2013, 120 Americans died each day due to a drug overdose. There has been a noticeable decline in opioid overdoses and deaths in states that have legalized the use of medicinal cannabis

The Trump administration has so far remained mum on any federal changes or enforcement efforts related to state-legal cannabis operations, leaving many in the cannabis industry wondering what the next four years could have in store.