Brian SaadyMay 4, 2017
Share
Share on Twitter   Share on Facebook
Print
(Alex Brandon/AP)
Most Americans can’t cite the Constitution’s Sixth Amendment, but nearly everyone is familiar with this portion of the Miranda rights: “If you cannot afford an attorney, one will be appointed for you.”

We tend to take this right for granted, but it’s not nearly as available as we assume. In a recent 60 Minutes segment, Anderson Cooper reported on a decision last year by New Orleans chief public defender Derwyn Buntin to not accept any more felony cases.

Buntin said there wasn’t enough staff or funding to adequately represent the office’s clients. At the time, his office of 52 attorneys was responsible for defending more than 20,000 people every year. Some estimates have put the caseload for the New Orleans Public Defender’s Office at nearly five times the recommended limit.

Even states with healthy budgets are experiencing similar crises. The ACLU has filed lawsuits in California, Michigan, Washington, Utah, and Idaho alleging that the states haven’t provided adequate funding for public defenders.

What’s the major contributor to this constitutional crisis? The drug war.

State of the Leaf: Sacramento Sees 500% Drop in Cannabis Arrests

A study conducted last year by the ACLU and Human Rights Watch revealed that someone is arrested for drugs every 25 seconds in the United States. The same study found that arrests for cannabis possession outnumber all violent crime arrests combined.

President Obama’s attorney general, Eric Holder, was a vocal proponent of ensuring access to public defenders. In a 2013 speech, he said that “America’s indigent defense systems exist in a state of crisis,” and went on to establish a Department of Justice division, the Office for Access to Justice, to help provide more resources to public defender offices throughout the country.

At the same time, Holder spent much of his tenure carrying out the federal war on drugs. In 2010, he who vowed to “vigorously enforce” federal prohibition if California voted to legalize adult-use cannabis. He later backed down from that stance and allowed Colorado and Washington to proceed with regulated legalization, but federal raids on medical marijuana dispensaries didn’t end until Congress zeroed out the Justice Department’s budget for prosecuting medical cannabis cases.

In other words, Holder’s new division was treating the symptoms even as his Justice Department as a whole was feeding the disease.

You don’t hear much about this issue because few politicians want to be labeled as “soft on crime”—and using public money to defend accused criminals is frequently attacked as exactly that. Yet even the courts have acknowledged the system’s failings. In Louisiana, a federal judge highlighted the need for reform even as he dismissed a lawsuit on the matter filed by the ACLU.

“It is clear that the Louisiana legislature is failing miserably at upholding its obligations,” wrote US District Judge James J. Brady, noting in his decision “the undisputed inadequacies of a state funding system.” However, Brady dismissed the case largely because of his reluctance to intervene in state budgetary matters.

Insufficient staffing and funding have forced numerous public defender’s offices to make unenviable choices. In December of last year, a judge held the chief public defender of New Mexico in contempt of court because he refused to provide lawyers for indigent defendants.

In response, the office in March filed a petition to the state Supreme Court requesting that private attorneys be ordered to represent these defendants for free.

A better, cheaper option would be to stop flooding the courts with unnecessary cannabis cases.

The director of the Missouri’s public defender’s office, Michael Barrett, also took bold steps to raise awareness about the issue. Citing a state law that grants him the power to assign cases to any lawyer in the state, assigned one of his open cases to Gov. Jay Nixon, who had repeatedly reduced funding for public counsel.

In terms of due process, it would be wonderful if every state allocated more funding for public defenders. In New Orleans, Buntin’s controversial decision to turn down felony cases resulted in more funding, which enabled the office to hire nine more staff attorneys.

But increased funding is much like placing a bigger Band-Aid on a gaping wound. A better, cheaper option would be to stop flooding the courts with unnecessary cannabis cases.

It is no coincidence that one of the more extreme examples of this constitutional crisis is occurring in New Mexico, where Gov. Susana Martinez has insisted upon implementing an absurdly rigid anti-drug agenda. She’s already twice vetoed bills to legalize industrial hemp research, for example, rejecting the bipartisan legislation even as her state boasted the highest unemployment rate in the nation.

While legalizing cannabis could go a long way toward addressing the constitutional concerns, there are many states where all-out legalization is still distant on the horizon. Consider Florida.  While there’s not yet sufficient support for legalizing adult-use cannabis in the state, the Florida Legislature may soon pass a compromise that could curb the flow of criminal cannabis cases.

If the proposal passes, Florida police officers would be able to issue civil citations for various misdemeanor offenses—including cannabis possession—instead of making arrests. Seven of the state’s counties have already implemented similar policies. The cost savings are considerable, and it frees up the court system and law enforcement resources to handle more serious crimes.

State of the Leaf: Tennessee Halts Decrim in Memphis & Nashville

This “smart on crime” approach is gaining in both traditionally liberal and conservative districts. In Harris County, TX—where prosecutors are among the most likely in the nation to seek the death penalty—the district attorney’s office in March began a similar civil citation program for defendants found with small amounts of marijuana.

“Officers no longer have to go through the booking process with persons caught with small amounts of marijuana and don’t have to spend time testifying against them in court,” Dane Schiller, a spokesman for the DA office, told local news reporters.

Progress is a slow process, but public opinion polls continue to show that support for the drug war is waning. People are waking up to the direct consequences prohibition, and they’re finally considering the indirect fallout such as the public defender crisis.

It makes practical sense to save taxpayer money by slowing the needless additions to the world’s largest prison population. But it’s also a matter of justice: It’s imperative to uphold the 6th Amendment. Justice shouldn’t be available only to those who can afford it. 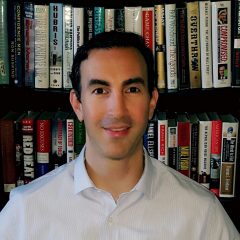 Brian Saady is the author of the three-book series Rackets, about the legalization of drugs and gambling and the decriminalization of prostitution.