Residents in nine of the 11 states that have legalized the adult use of cannabis have no regrets about ending prohibition. In fact, according to a new survey, large majorities now deem the move a whopping success.

YouGov, an international research data and analytics group based in London, surveyed more than 32,000 Americans in legal states. Participants were asked if they considered recreational marijuana legislation to be more of a success or failure. The survey was conducted April 17-20, 2020.

In Colorado and Washington, the first states to legalize (in 2012), voters responded with two thumbs up. In Colorado, 71% of those asked said they considered legalization a success, while only 17% saw it as a failure. In Washington, 65% counted it a success, with only 18% considering it a failure.

Popularity of legalization grows after implementation

Those margins indicate that a significant block of people who originally voted against legalization now see it as a good move for the state. Colorado’s Amendment 64 passed in 2012 with 55% of the vote, while Washington’s Initiative 502 passed with 56% approval.

Other states have similar approval ratings:

YouGov did not receive a reportable sample size from Alaska or Vermont, the two other legal cannabis states. 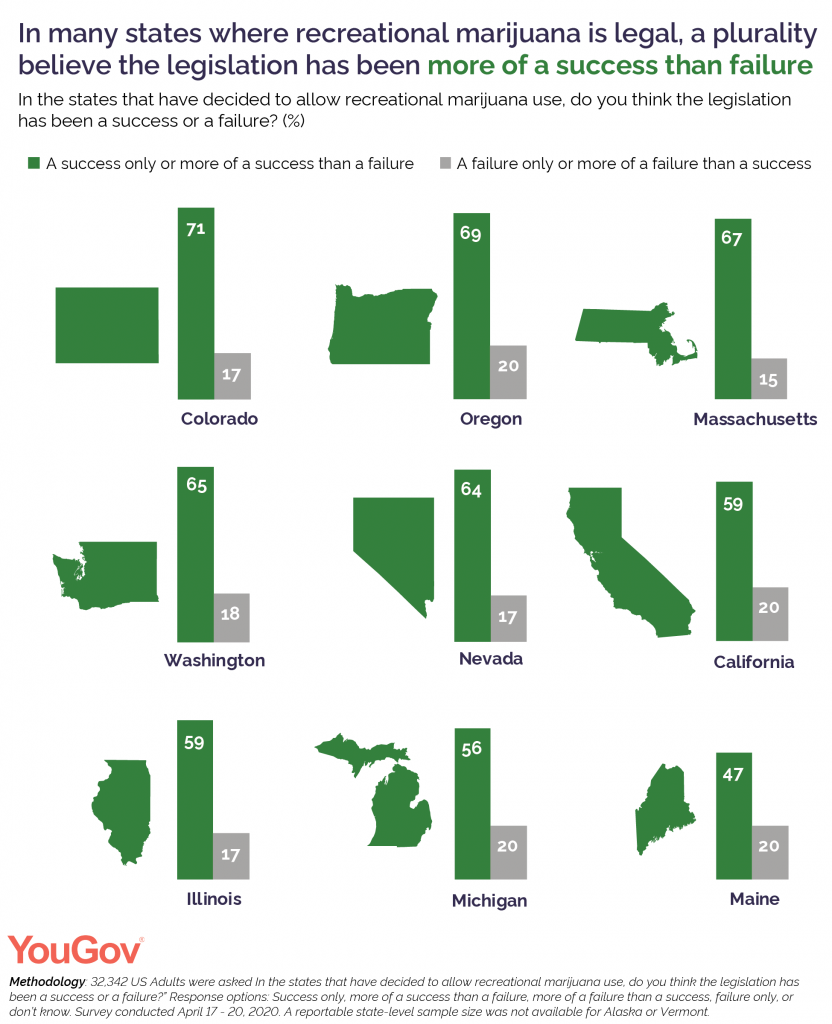 Interestingly, the perception of success seems to correlate with both the passage of time and the efficiency of a state’s retail recreational marijuana system. Colorado, Washington, and Oregon were among the earliest adopters of adult-use legalization, and their retail industries have been booming for years.

Maine, by contrast, passed adult-use legalization years ago but its residents are still waiting for the state’s first recreational stores to open. That was a result of efforts by a previous governor to undermine the will of the voters by slow-walking Maine’s rollout.

California voters may be less than ecstatic about legalization because large sections of the state still function as legal-cannabis deserts. Retail stores abound in San Francisco, for instance, but many rural counties and cities have banned them altogether, leading to a less-than-satisfying outcome for many voters. It’s legal in California, but many residents have to drive hundreds of miles to find the nearest licensed store.