At the Trichome Institute, Students Learn to Predict Cannabis Effects by Aroma

Students hunched over the table, holding lights and magnifying tools close to the specimen. Cannabis buds were lined up on wire frames, illuminated under bright lamps that exposed every detail and flaw of the flower. Across the room, curious pupils passed around jars of cannabis, inhaling with three short breaths through the nose like wine sommeliers.

In Denver, Colorado, the Trichome Institute invites aspiring cannabis connoisseurs from around the world to come and learn the intricacies of quality cannabis. With pinpoint precision, students learn to identify mold, aging, nutrient lockout, and other poor growing practices.

But separating the good cannabis from the bad isn’t the only skill you’ll pick up in this class. Attendees also learn how to better predict the effects of any given cannabis flower with the help of just one tool: their noses.

How Aroma May Determine Sativa, Indica, or Hybrid Effects 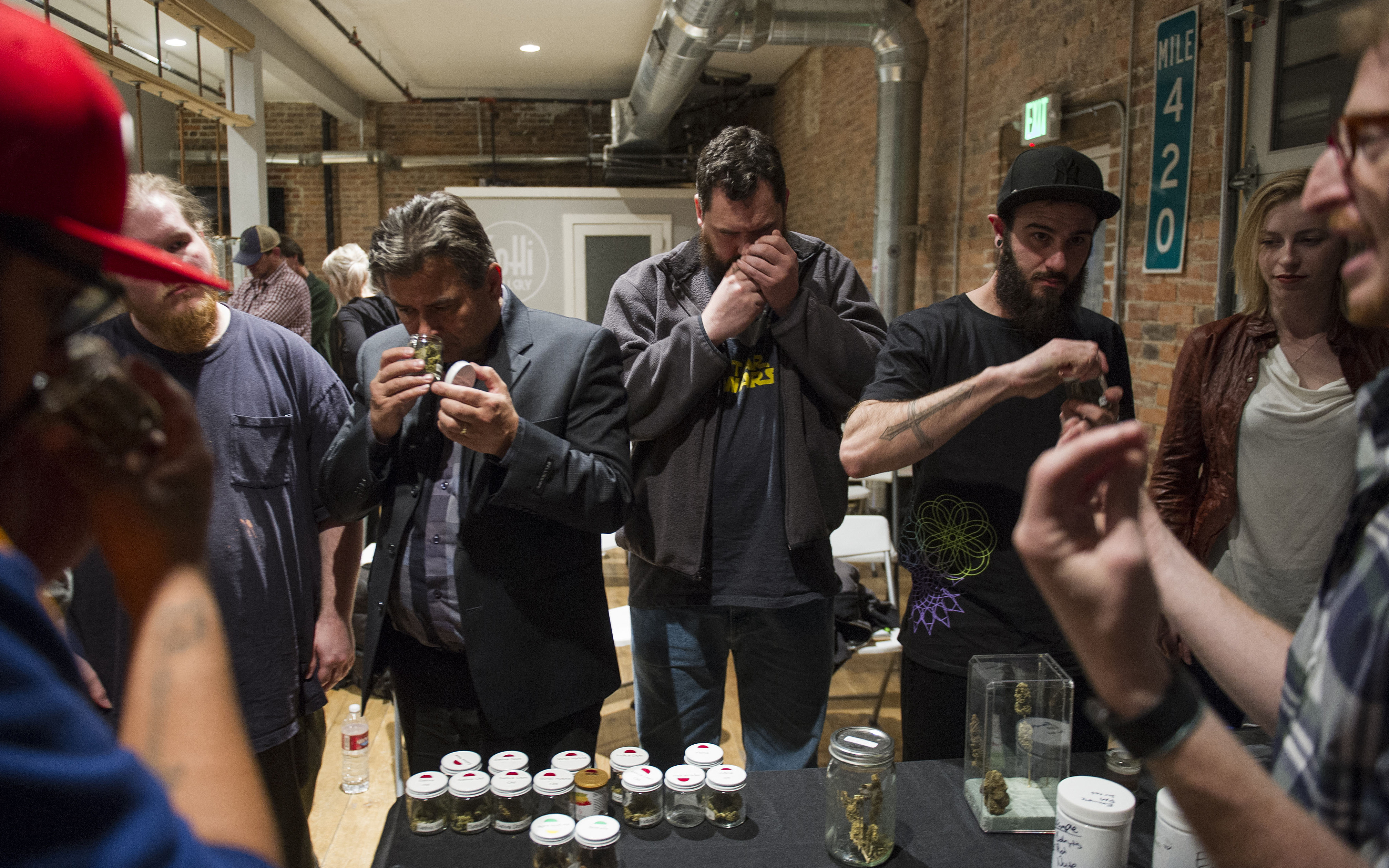 When choosing a cannabis strain, many consumers rely on three words to guide their decision: indica, sativa, and hybrid. Popular knowledge has trained us to associate sativas with energy, indicas with rest and relaxation, and hybrids somewhere in between. But by now, most of us know this pattern doesn’t always hold true.

“I’m trying to help the world break away from calling these indicas and sativas because it doesn’t always work out that way.”

That’s why Max Montrose, founder of the Trichome Institute, designed a program that would equip consumers with a more reliable method of predicting a strain’s effects.

“When you see [a strain] that’s a 40/60 indica, that’s someone giving you their best guess based off of their experience, what they believe that ratio is after they smoke it,” he told Leafly in an interview. “I’m trying to help the world break away from calling these indicas and sativas because it doesn’t always work out that way.”

While expectations attached to indica and sativa classification often influence our experience, Montrose believes we can do better. And all it takes is a few good sniffs of your flower.

The method is called “interpening,” and it’s based on the idea that a strain’s effects can be best predicted by the aroma the flower produces. The reason is this: cannabis flowers produce aromatic oils that contain terpenes, organic compounds that not only create different flavors, but unique effects as well. Think of it like aromatherapy. Inhaling lavender essential oils relaxes the body due to the function of terpenes like linalool. Other terpenes like pinene (which smells like–you guessed it–pine) offer stimulating, alerting effects.

The amount of THC and CBD may dictate a strain’s psychoactive potential, but more consumers are subscribing to the belief that terpenes are what determine the sedating or stimulating tone of a strain.

Interpening teaches students to characterize strains not only by the aroma itself, but where in the nose the aroma is felt. “When you smell citrus, that’s the nerve in your brain that knows that the smell is citrus,” Montrose said. “People who don’t have that ability to smell [differences in aroma] can still feel the terpenes in the different parts of their nose, and that’s something I thought was really incredible.”

Montrose hopes that interpening will help consumers dig beyond the indica/sativa/hybrid label. Even still, you’ll hear the words “indica” and “sativa” used in the interpening class to denote relaxing and uplifting strains respectively. That’s simply because the cannabis industry has appropriated these botanical terms to such a degree that removing them or redefining them would be like moving a mountain.

The method is called “interpening,” and it’s based on the idea that a strain’s effects can be best predicted by the aroma the flower produces.

Is Interpening Legit, or Just Difficult?

When students reach Level 2 of the interpening program, they must take a test in which they plot anonymous strains on the indica to sativa spectrum using only their nose–and only about 10 percent of exam takers will pass and achieve their interpening certification. But is the test really that difficult, or is there a problem with the method?

“If there are distinctions between available cannabis ‘strains,’ such phenomena are most likely related to relative terpenoid contents and ratios.”

“I’m super confident in basing strain classification on aroma. I’m 100% solid on that,” Montrose told Leafly. “What I also respect is how hybridized these flower types are.”

Each flower can contain more than 200 different terpenes, some of which deliver more intense aromas than others.

“Let’s say 150 of them are more sedative terpenes, but you still pick out that strong citrus note because it’s sharp, it’s strong, and you’re familiar with it,” Montrose said. “But maybe there are many more terpenes that have a pharmacy of being more sedative.” In this way, interpening can sometimes be incredibly difficult for the initiate. 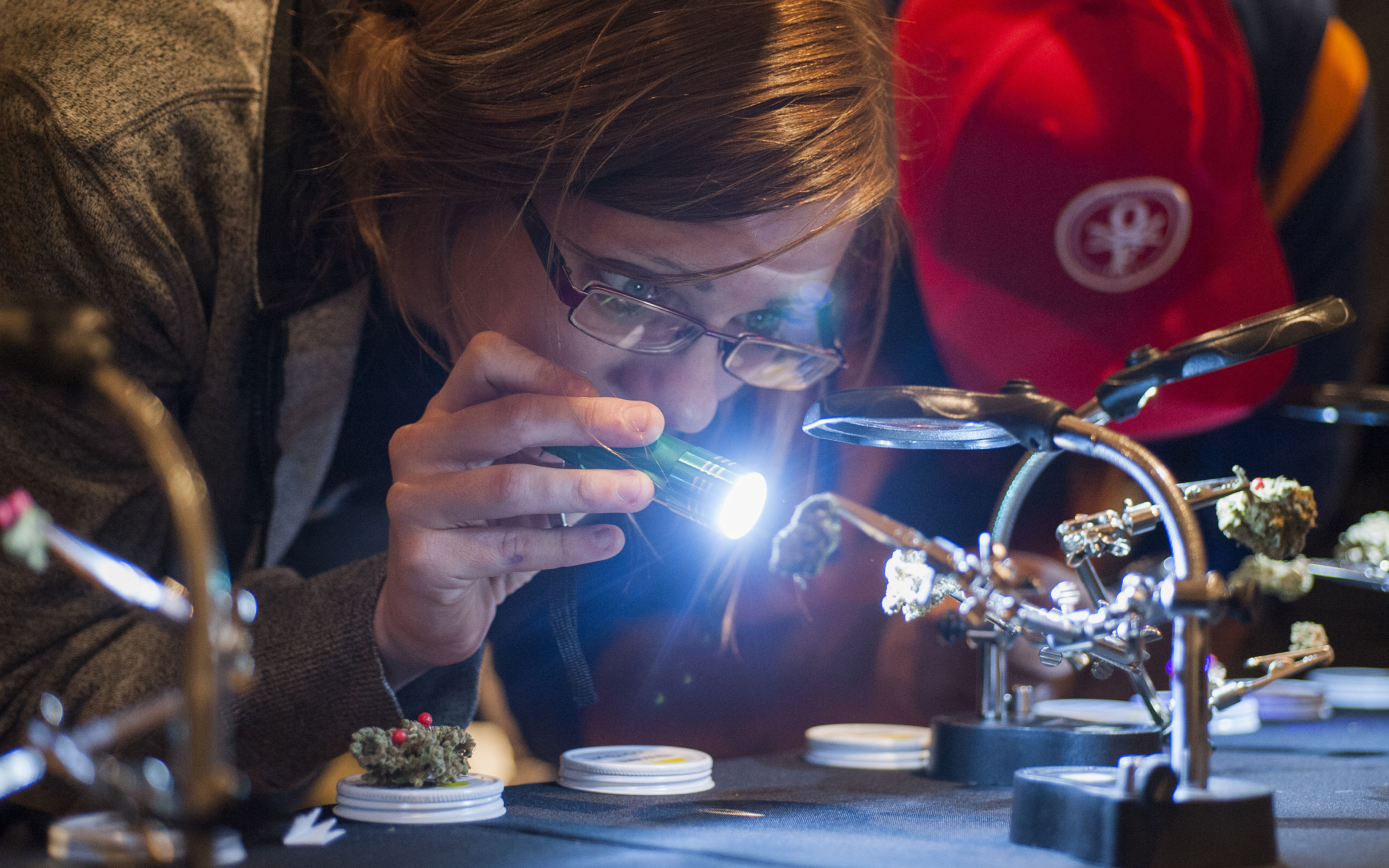 Arizona resident Kiley Kane uses a flashlight to observe a flower during a sommelier class at SOHI Art Gallery in Denver, CO. (Daniel Brenner for Leafly)

“Someone else besides me will need to design a test to prove this theory,” Montrose said, when asked how interpening will be fact checked in the future. He mentions using neurological studies someday to bring empirical evidence to the correlations.

Research on cannabis terpenes is already on the rise, thanks in large part to neurologist and psychopharmacologist, Ethan Russo. “If, as many consumers and experts maintain, there are biochemical, pharmacological, and phenomenological distinctions between available cannabis ‘strains,’ such phenomena are most likely related to relative terpenoid contents and ratios,” Russo stated in a paper titled “Taming THC.”

Related
The entourage effect: How cannabis compounds may be working together

THC and CBD cannot be solely responsible for all the nuanced effects of cannabis flower, and as educated consumers shift their thinking towards terpenes, it makes sense to teach and engage practices such as interpening.

Montrose gives the example of Banana Kush and Golden Goat, two strains he found with identical cannabinoid profiles. “They were both 22% THC, 1.5% CBD, and 0.5% CBN,” he said. “So why does one flower make you feel like you can clean your whole house while the other makes you feel like you can’t lift a pinky? What’s the difference if their cannabinoids are identical? It’s terpenes. And terpenes are complex.”

Interpening in a Rapidly Changing Industry 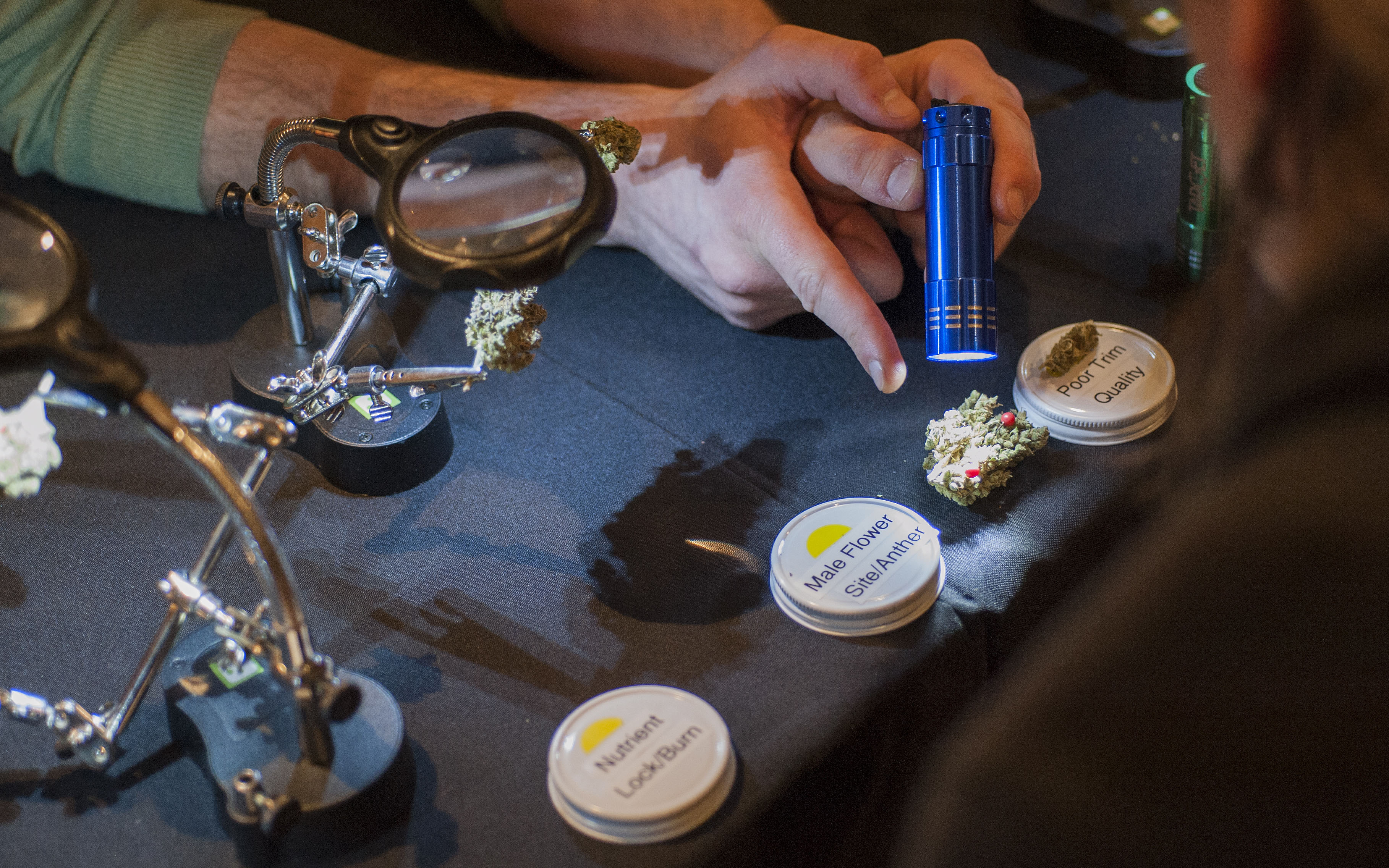 Trichome Institute sales and operations manager Rollie Hermoso points out different aspects of a flower during a sommelier class at SOHI Art Gallery in Denver, CO. (Daniel Brenner for Leafly)

While appreciating the nuances of cannabis aroma could be as much of a hobby as coffee, beer, or wine tasting, interpening serves purposes beyond enjoyment or bragging rights. It allows patients and consumers to be more confident in their selection of a product–a product whose label often lacks the real information they need.

“Interpening is important for people today because it helps them select what they are getting in a time period where that’s a challenge in our industry,” Montrose said.

Related
Budtender Resource: How to Help Your Patients Choose the Right Strain

Even in legal, regulated states where lab testing is mandated, consumers typically only know:

It’s become commonplace to rely on just a single facet of a product, such as THC percentage or strain name. For many consumers, that’s enough, especially if they aren’t insistent on a particular experience or therapeutic benefit.

But Montrose thinks we can do better for the wide variety of consumers that exist, like the insomniacs who need to know they’ll be able to sleep at night. The novice consumer looking for a relaxed first time experience. The person treating depression who requires a stimulating strain to stay up and out of bed. We can do better for anyone who just wants more out of their experience, because the world of cannabis is an ever-expanding playground if we take the time to learn more about it.

“Even if you’ve smoked cannabis for 10 years, it still isn’t anywhere close to what you think it is,” Montrose said. “There’s so much more to know about it.”