Canada’s next cannabis tourism destination could be this small town

Most kids visited the factory at least once growing up with grandparents or on a school field trip, and many still remember it for the bin of broken chocolate at the end of it, which you could buy by the bagful at diabetically low prices. 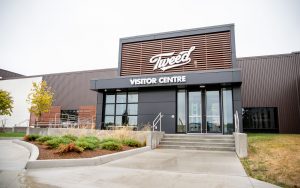 Canopy Growth’s decision to base itself in that old Hershey factory did wonders for the economy of Smiths Falls, an hour’s drive southwest of Ottawa, with a population of about 9,000.

But one thing it didn’t do was spark tourist interest—principally because Health Canada frowns on LPs selling broken buds by the bagful, along with many other practices that goose tourism business.

Smiths Falls itself set out this week to change that, presenting its Cannabis Tourism Strategy to town council with the aim of “[establishing] Smiths Falls as the premiere cannabis tourism destination in Canada.”
Related

Mayor Shawn Pankow noted hopefully, “In other parts of the world where legalization has been introduced, cannabis tourism has injected hundreds of millions of dollars in direct and indirect revenue.”

Of course, in those other parts of the world, you can also legally enjoy cannabis lounges, or smoke a joint while outdoors in a boat. Ontario is struggling with both these ideas—leaving those aspiring to cannabis tourism stuck for options.

Legally, you can’t sell or give cannabis away to the public without a Health Canada license; you can’t serve cannabis as food; you can’t smoke or vape while on a boat, or in a lounge, or club; nor can you smoke in bars.

As well, all advertising of cannabis products is tightly regulated.

Mayor Pankow and his forward-looking team hope cannabis-themed spas might be a growth area, as well as edibles, but the town does not yet even have a cannabis store (and LPs are not licensed for on-site “farm gate” sales).

To date, 30,000 have visited Canopy’s visitor centre, which is a good start, but it’s not 24-hour-Vegas-dispensary popular.

Industry
Eastern Ontario Towns Shut Out in Latest Cannabis Retail Lottery
Canada
Opinion: Advertising Rules for Cannabis in Canada Are Too Strict
Lifestyle
Cannabis Tourism 101: What to Know and Where to Go
Industry
Here’s Where Ontario’s Next Crop of Legal Cannabis Stores Will Open