Meet the Woman Throwing the Coolest Cannabis Parties in California 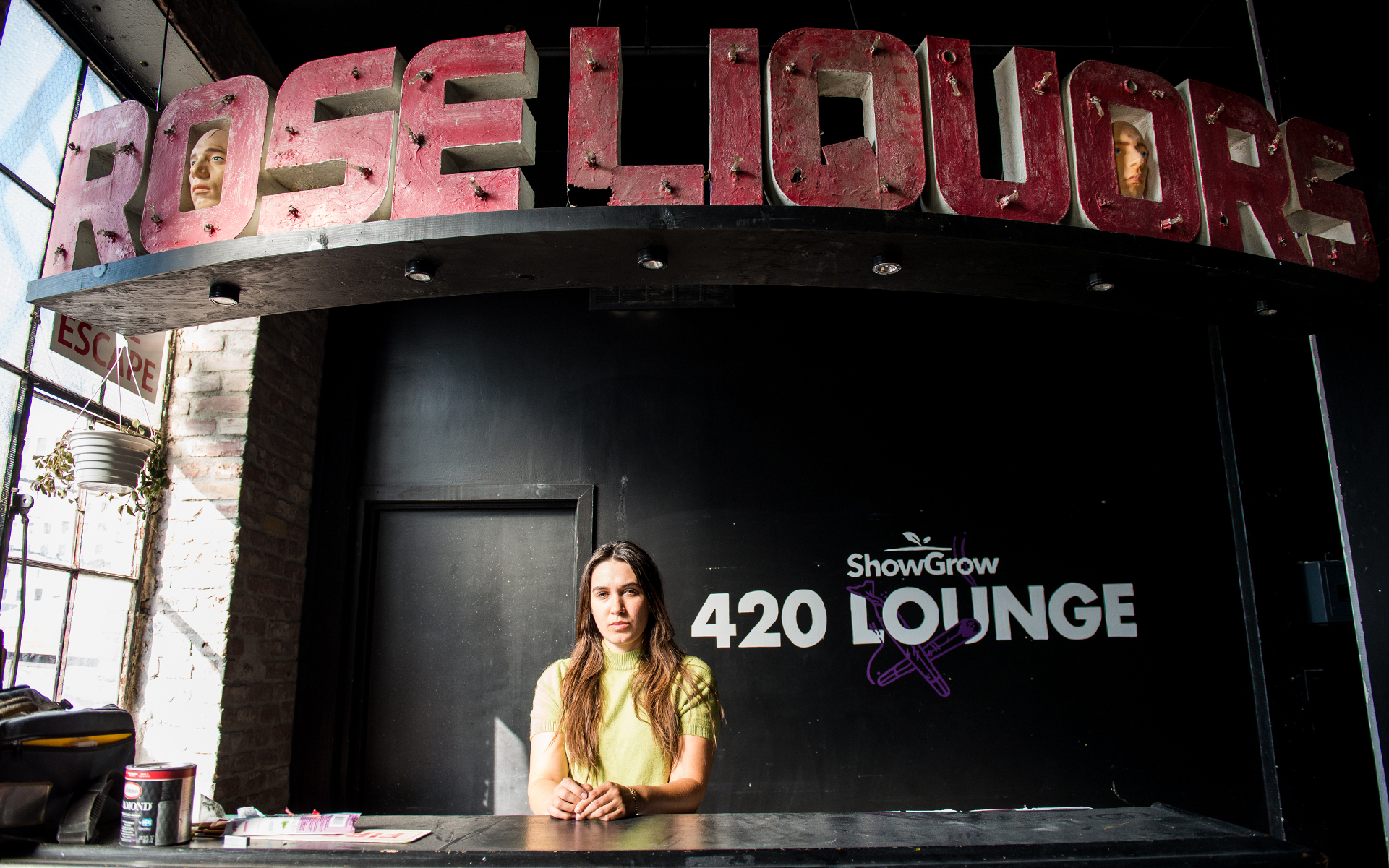 Katie Partlow, Director of Social Experiments at Little Face events, pauses for a portrait in the 420 Lounge while preparing for the opening of the Drinkin' Smokin' & West Coastin' art show at the Think Tank Gallery in downtown Los Angeles, CA Sunday, August 13, 2017. The show opens on the 19th and features various interactive art installations and events. (Justin L. Stewart for Leafly)
Katie Partlow’s cannabis parties have been called the best in California—and with California home to the deepest-seated cannabis culture in the world, these just may be the best cannabis events on Earth.

Through her events company LITTLE FACE, Partlow focuses on full, curated immersion of all five senses and a true search for exactly what makes us tick when we’re high. Forget the sorts of activities you’d enjoy at a cocktail party or a festival—we want entirely different experiences with cannabinoids in our system.

Partlow has been obsessed with throwing themed parties since she was young. Bit by bit, cannabis and events have co-mingled to form the incredibly cool career path she’s following today. Yet few people could have gone from throwing their first public cannabis event at the beginning of 2016 to being one of the best cannabis party planners in the world a year and a half later. I chatted with Partlow to learn how she got her start, exactly what inspires her, what’s still problematic about cannabis parties, and what hot-ticket events she’s working on next.

Leafly: Rolling Stone called your last event the best pot party in California. What got you started throwing events? 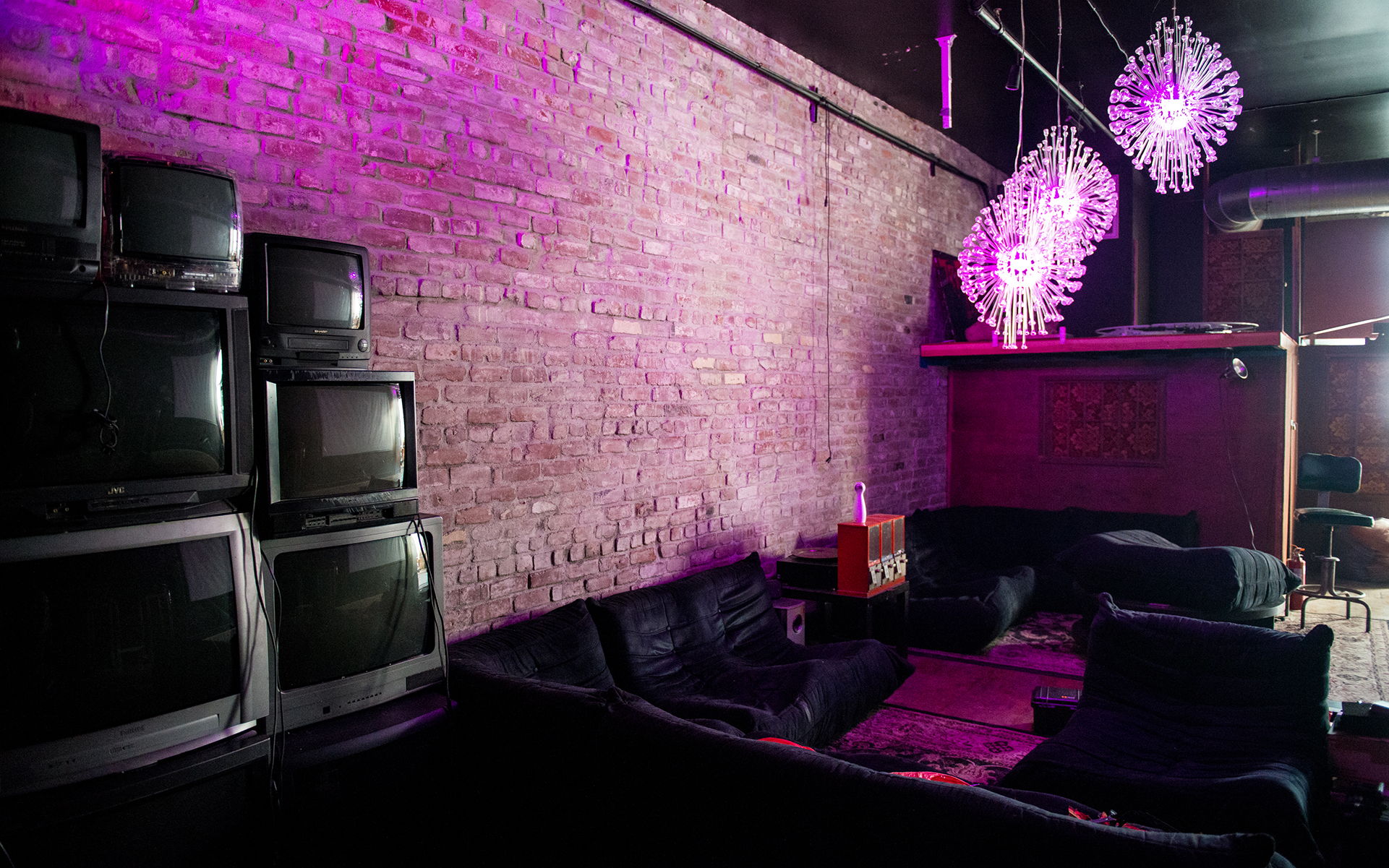 KP: I started taking event planning seriously while I was in college. Throwing cannabis-infused events is something I had always dreamt of doing. When I moved to LA to throw events, I immersed myself in the cannabis industry, working as a budtender, trimmer, joint roller, and cultivator.

Tell me about the upcoming Drinkin’ Smokin’ & West Coastin’ art exhibition and event series hitting LA on August 19th, and which events you’ll be involved in. 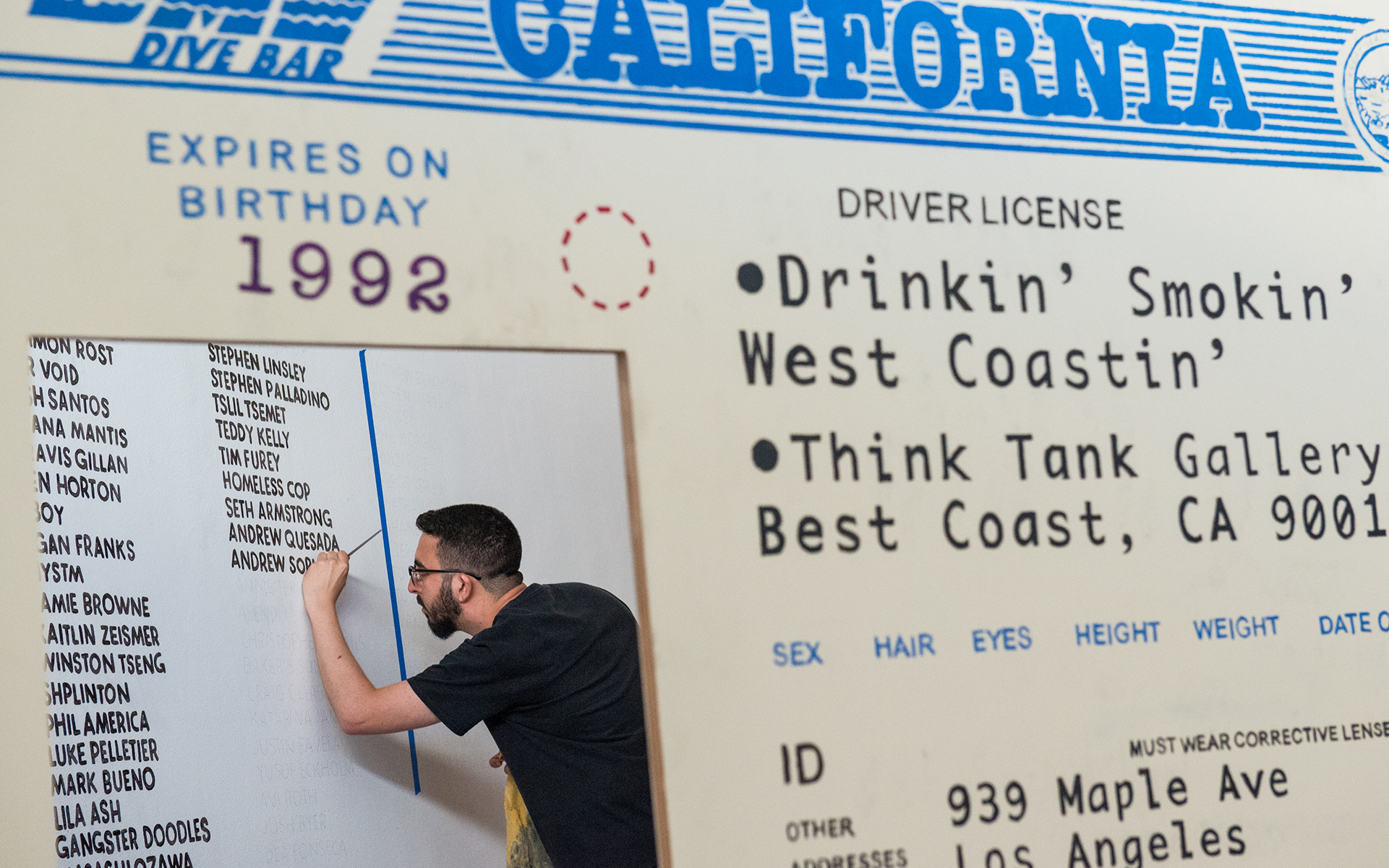 Artist Ash Santos paints the names of all the artists in the Drinkin’ Smokin’ & West Coastin’ art show on the wall of the Think Tank Gallery in downtown Los Angeles, CA Sunday, August 14, 2017. The show opens on the 19th and features various interactive installations. (Justin L. Stewart for Leafly)

Drinkin’ Smokin’ & West Coastin’ is ‘a month of art and events about Los Angeles, and all the stereotypes that come from it – especially the true ones. It’s a reflection on classic Best Coast culture from the ’84 Olympics to the Kings/Lakers rivalry, the period when we grew up with our city, and all the great and terrible things that happened in between.’ It opens August 19th and runs ‘til September 23rd. I am hosting or co-hosting three shows:

Brunchies (August 20th; 11 a.m.–3 p.m.): After the madness of [DSWC’s] opening night, many of us will want to wake and bake with the homies. So we asked West Coast legends Roscoe’s Chicken + Waffles to hook it up. They’re taking over our secret diner for a one-day-only event focusing on West Coast hip-hop, lowbrow art, and chicken and waffles [complete with] weed mimosas [and] prerolls.

Cannabis Cabaret (September 1; 9 p.m.–1 a.m.): An immersive performance cannabis speakeasy, co-produced with Higher Beauty. Pairing Los Angeles’ most explosive performers including the best in burlesque, drag, puppetry and more. I grew up a dance performer—ballet, Latin, and burlesque—and I always thought it would be great to host a Prohibition-themed burlesque show, with cannabis being served.

I want everyone to attend all of my events and feel like, ‘Wow, I have never experienced this before, but I’ve always wanted to.’

At all my events, the focus is around art and community. I am excited to bring the cannabis community into a space filled with artwork, and for the artists and community to get to know all the new cannabis products. I focus on the things I know and love best—food, performance, and laughing.

You told me that your cannabis cabaret event will be the largest you’ve ever done. How long does it take to put something like that together? 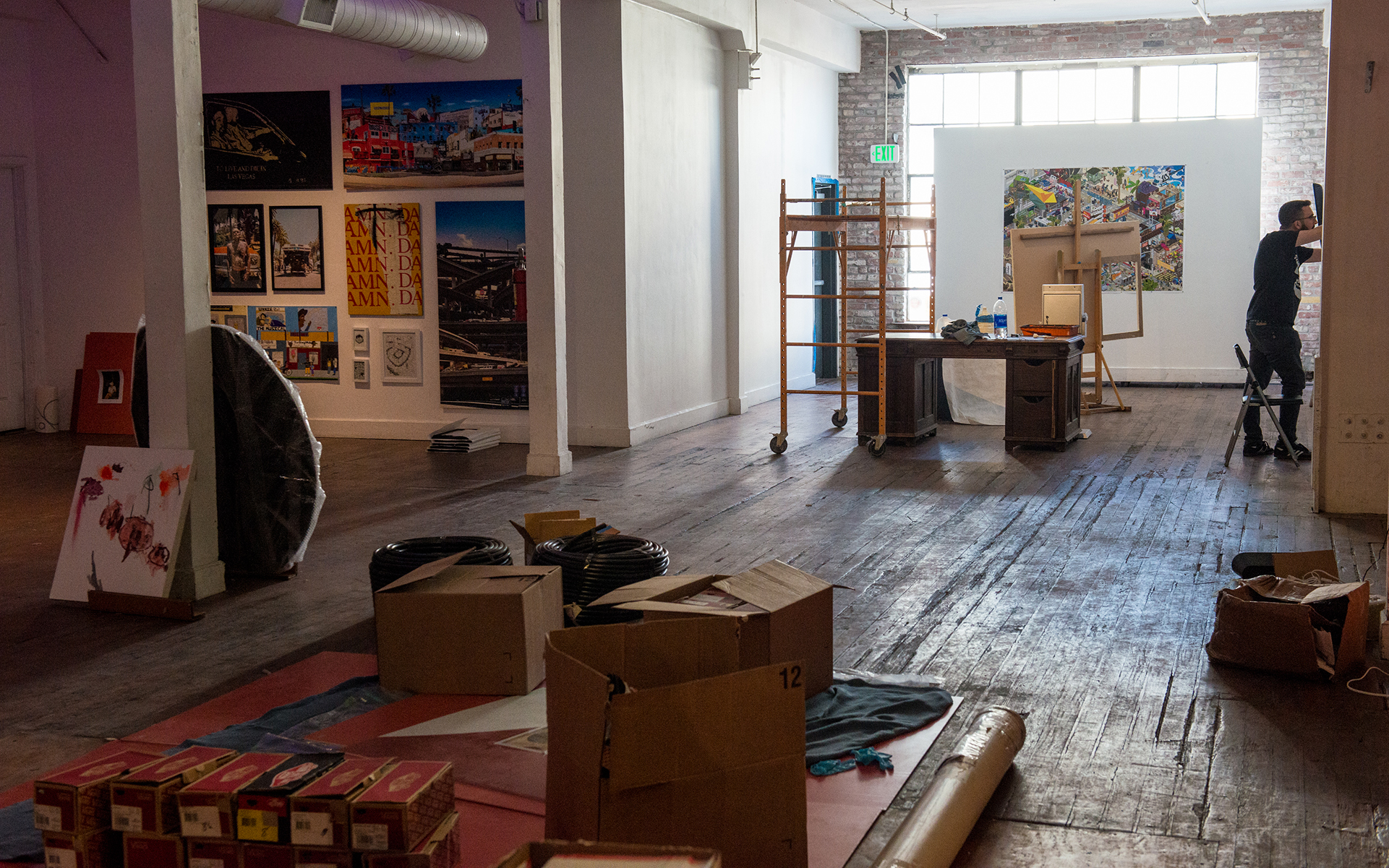 I feel like I have been planning my whole life for Cannabis Cabaret! It has been floating around my mind for years. At first, venues and dispensaries wouldn’t quite understand what I meant by “curated weed event” and they wouldn’t want to have anything to do with me. Can you blame them? It takes some explaining, but once you build trust with venues, they keep calling you back. Now that I have a solid network and team of folks behind me, it usually takes just a few weeks for full planning, marketing, and execution. It takes community support to really make all this happen … and I’m thrilled to be collaborating with the dream team again.

What’s different about throwing cannabis parties as opposed to, say, a cocktail party? 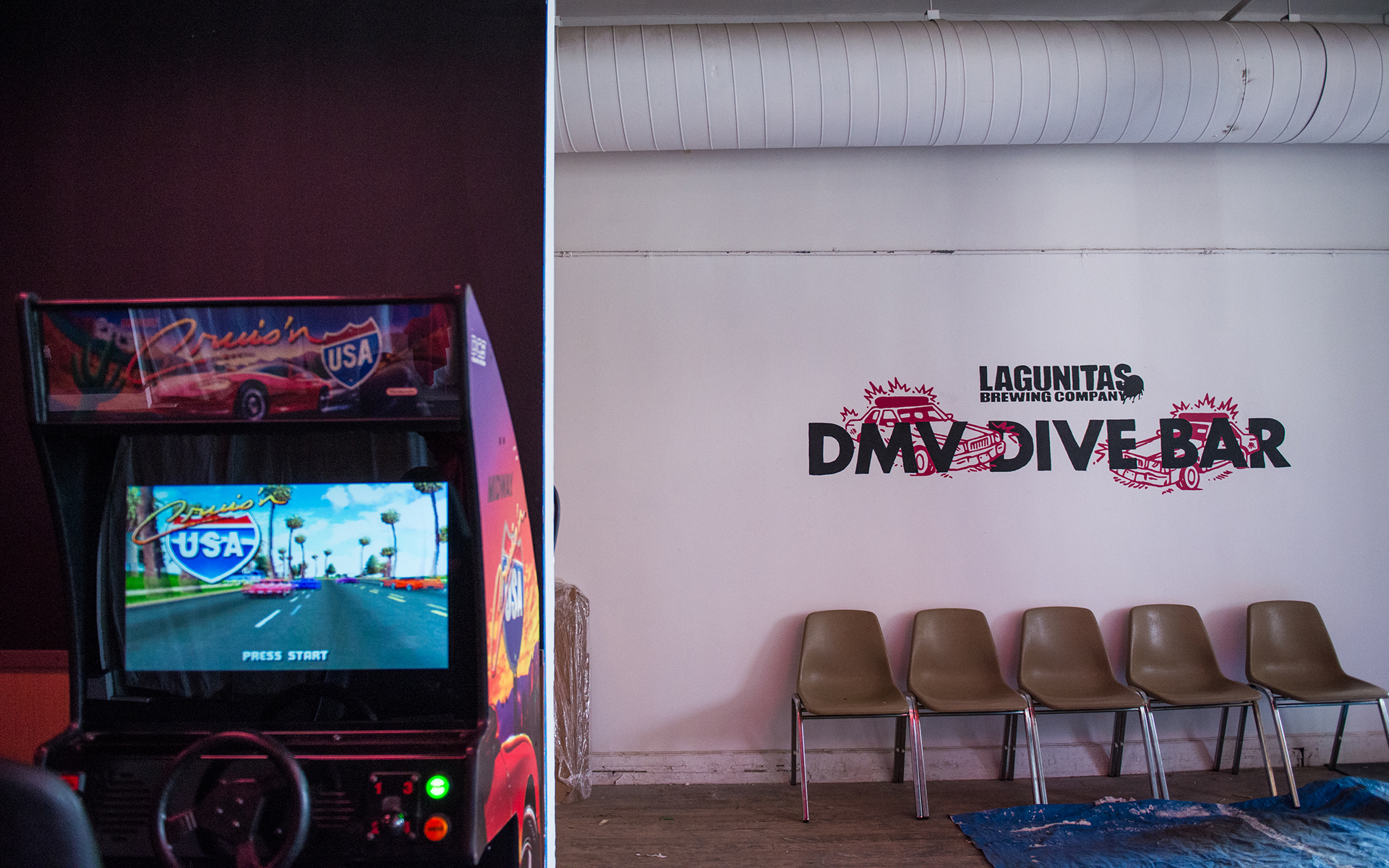 I consider it a huge privilege and responsibility to introduce people to cannabis products. This is an exciting time, there is weed in every single thing you can think of, so I vet out the brands, see who takes the time to get their flowers lab tested, etc. I curate the brands, food, and entertainment solely on whether or not I would consume it and like it.

It’s important to me, whether it’s someone’s first bite or million-and-first bite of a pot brownie, that everyone has a great experience.

I am extremely mindful of the space and environment, whether or not it’s a good space for someone who is ‘medicated.’ Would it be a place I would like to be if I was stoned? If the answer is yes, I proceed.

You can overdo it with weed, so I like to encourage folks to microdose. You can always take more, you can’t take less. I don’t want anyone to feel awkward. I want to create a community where people feel safe and like they can be themselves. No judgment if you are new at this, this is what the place is for.

What’s your relationship to cannabis? Do you have a favorite means of consumption? 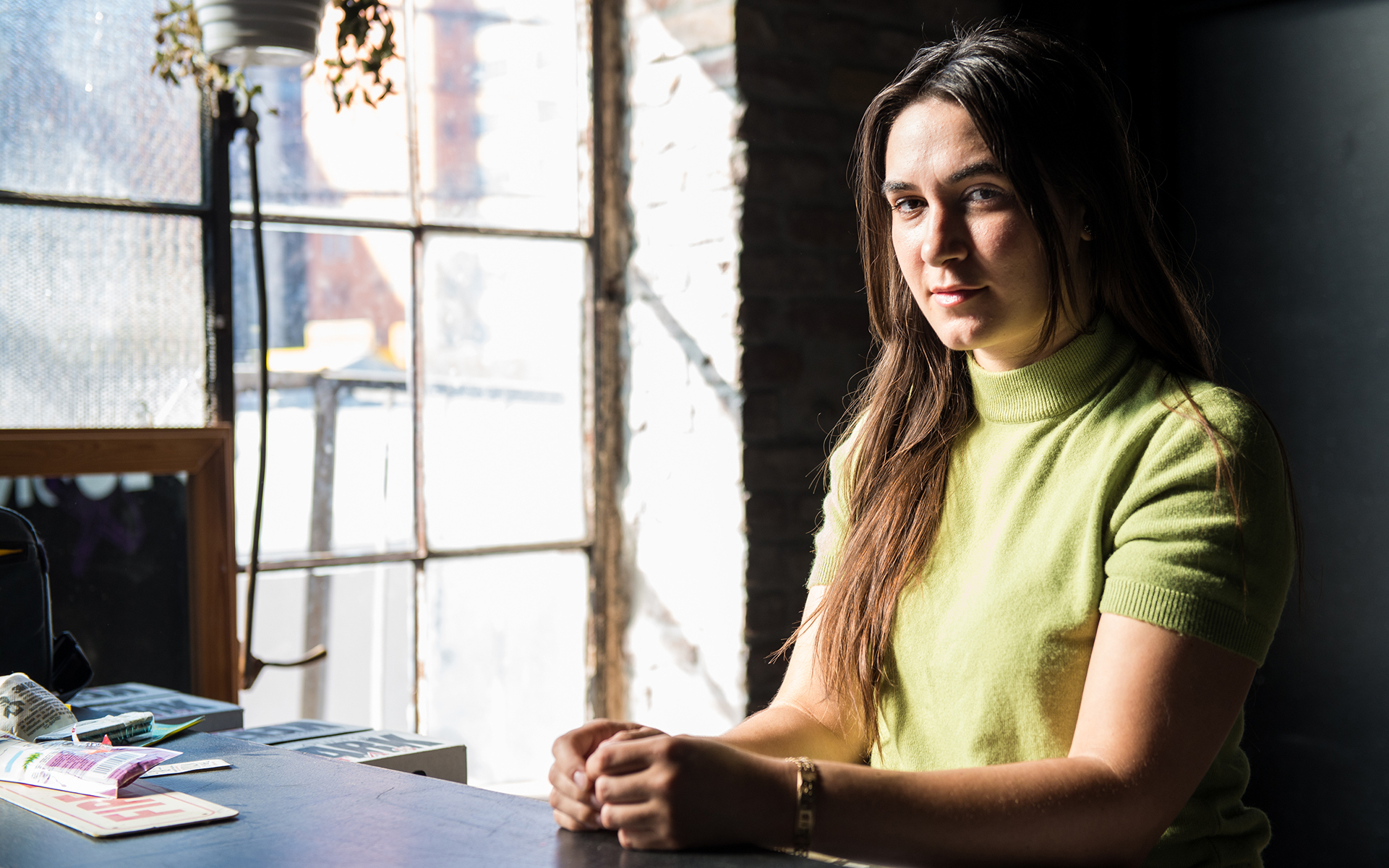 Katie Partlow, Director of Social Experiments at Little Face events, pauses for a portrait in the 420 Lounge while preparing for the opening of the Drinkin’ Smokin’ & West Coastin’ art show at the Think Tank Gallery in downtown Los Angeles, CA Sunday, August 13, 2017. (Justin L. Stewart for Leafly)

My relationship to cannabis? We are in a committed relationship. I really enjoy it all. When I want to be social, I usually stick to joints or make infused drinks. If I’m at a movie, I will usually take a small bite of a gummy candy to relax my body. I use topicals for sore muscles. For strains, I usually follow with my nose – I tend to like citrus-smelling sativas and sweet, pungent indicas.

Obviously the ability to throw cannabis parties is a privilege, and many others don’t have the same privilege. How do you hope to address this type of inequality through your events?

I left Washington, DC with many friends (myself included) who had been arrested for simple possession of marijuana and who suffered from the war on drugs. Either legal fees, probation, or jail time. When I arrived in LA, smoking outdoors felt funny at first.

California feels like a bubble, where people are forgetting about all the other people in other states who are still getting arrested, losing their jobs, losing their livelihoods due to the criminalization of cannabis. [I] remind people not to forget about those that were or still are in jail for marijuana. It’s hard for me to really “celebrate legalization” until the War on Weed is officially, federally over.

At my events, I welcome organizations and groups who are fighting for drug reform and racial justice—to join Little Face in celebration, but to raise awareness and funds to continue to support those who are and who have been negatively impacted by the War on Weed. One of the great things about the cannabis community is that it is truly diverse. All ages, races, colors, and creeds use cannabis so I think if we can all stick together, we can really smoke this legalization thing over the top!

Little Face is committed to building an inclusive space within the cannabis community, to education and research making us all better consumers, and to promoting likeminded artists and activists to grow the future we dream of. If you are interested in getting involved, performing, or attending, please connect with me: katie@littleface.events.

This article was updated August 22, 2017, to reflect a date change for Comedy, Cake + Cannabis. 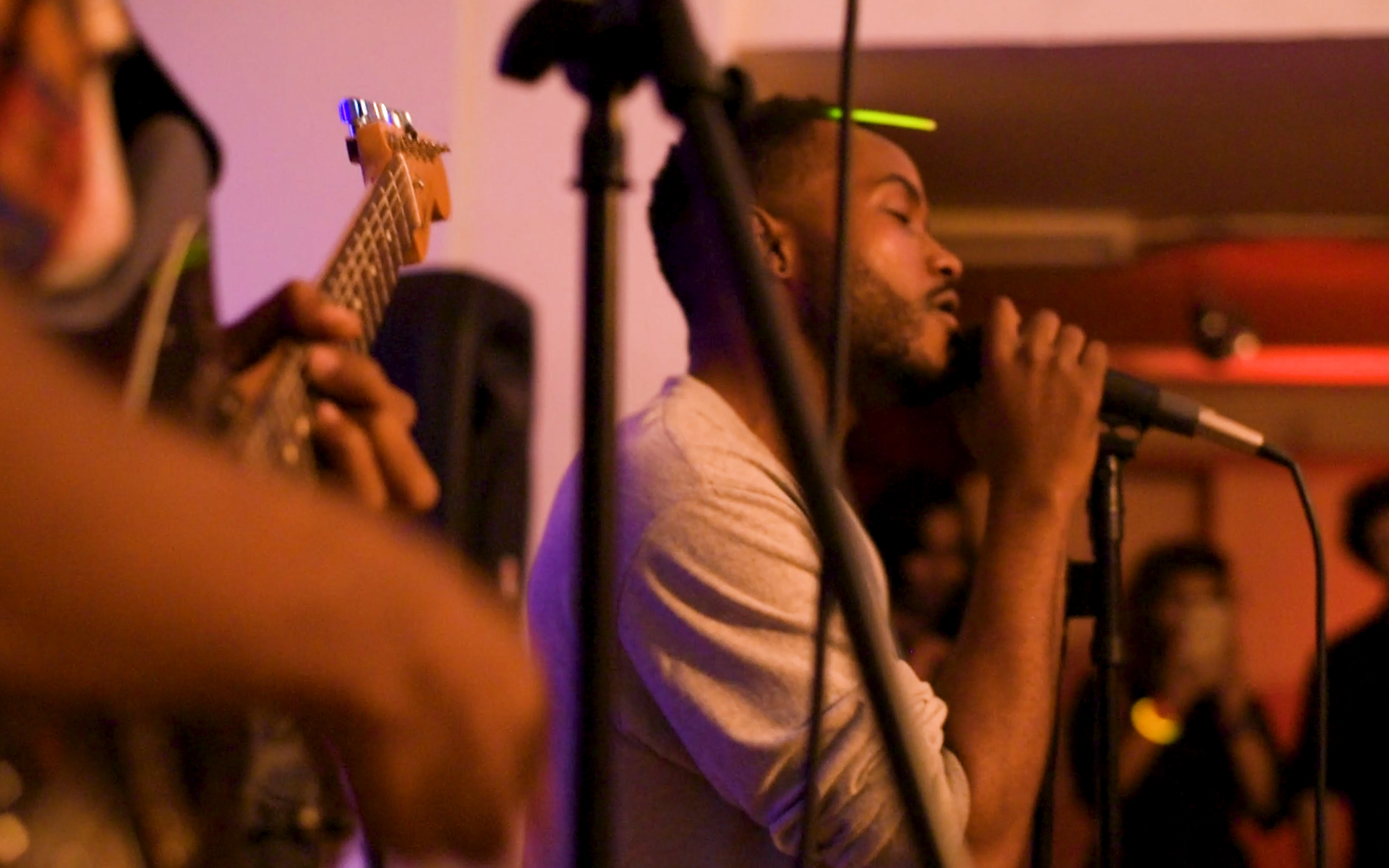 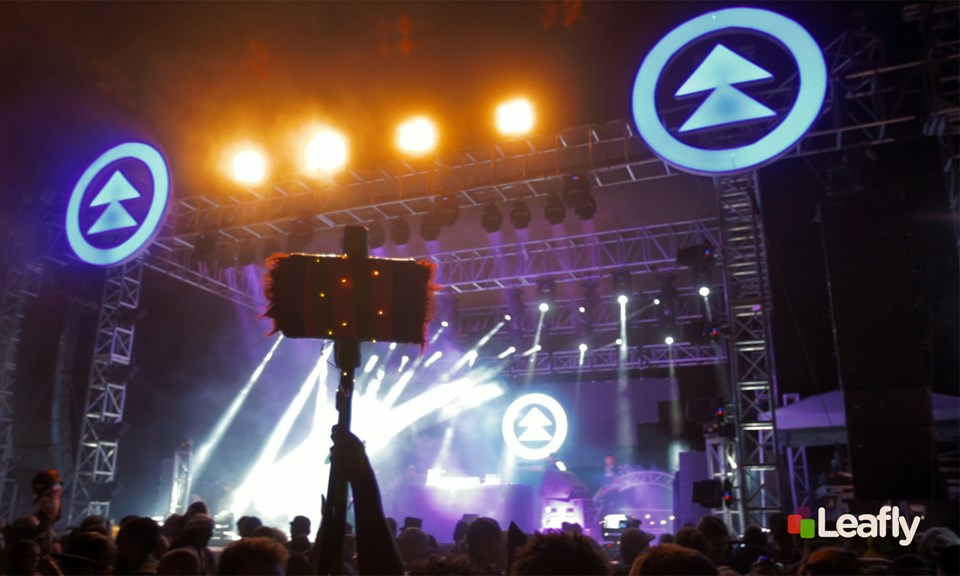 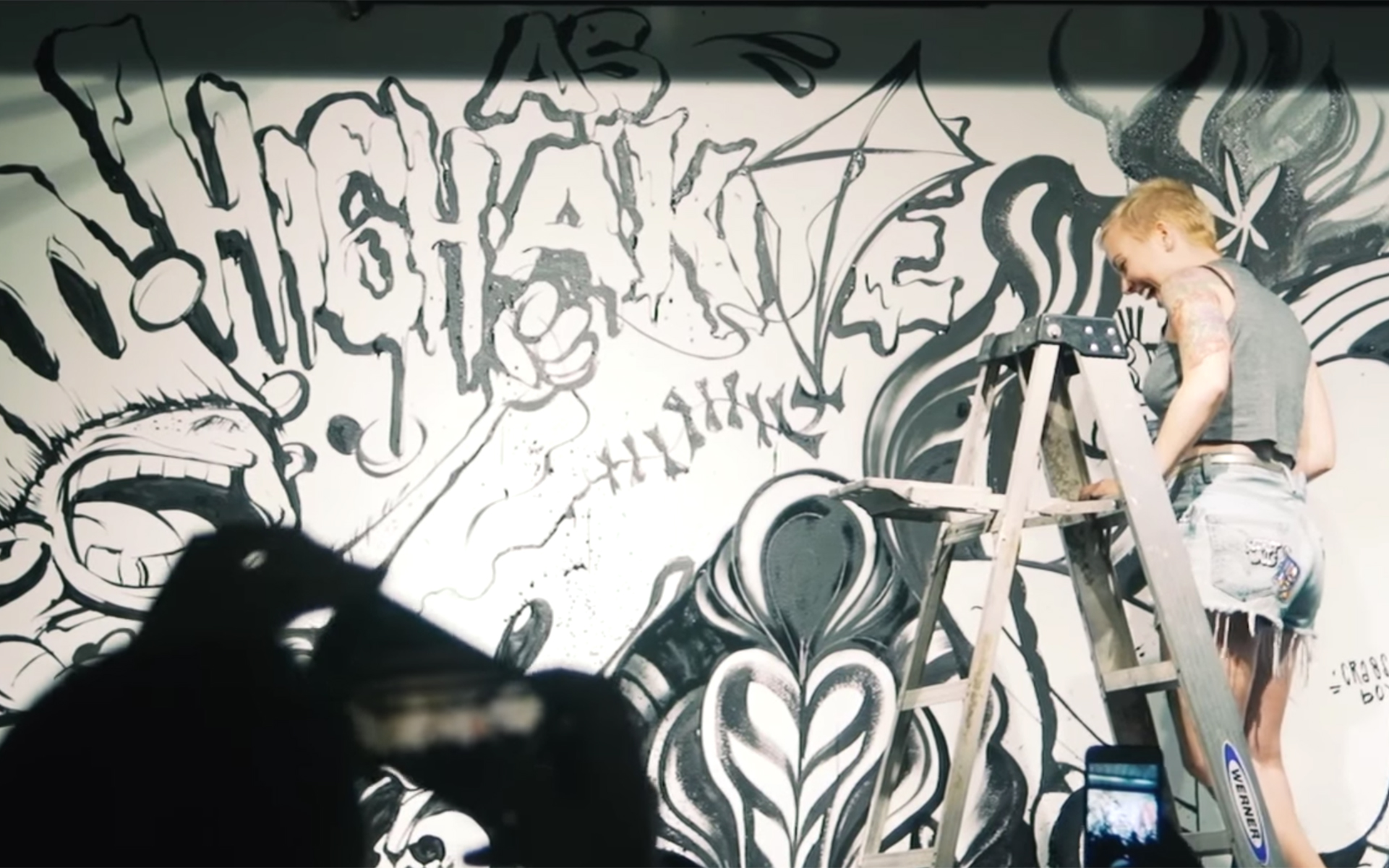 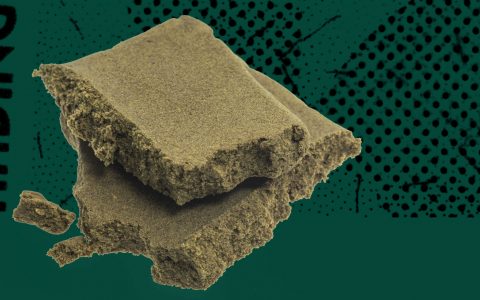 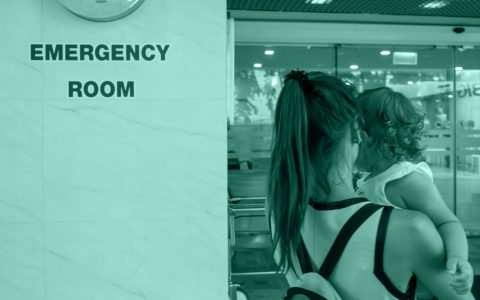 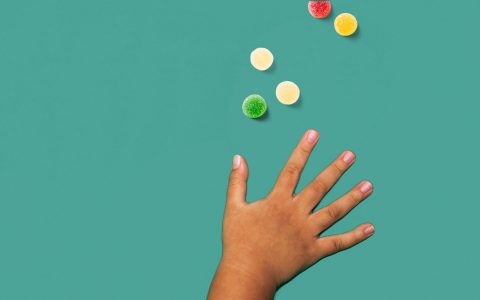 What it's actually like when a kid eats edibles 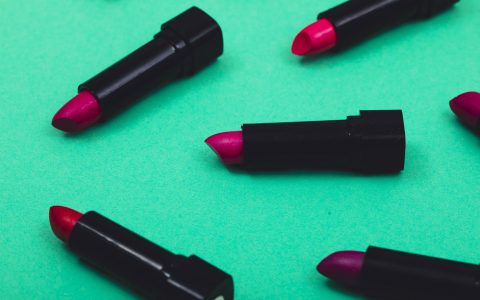