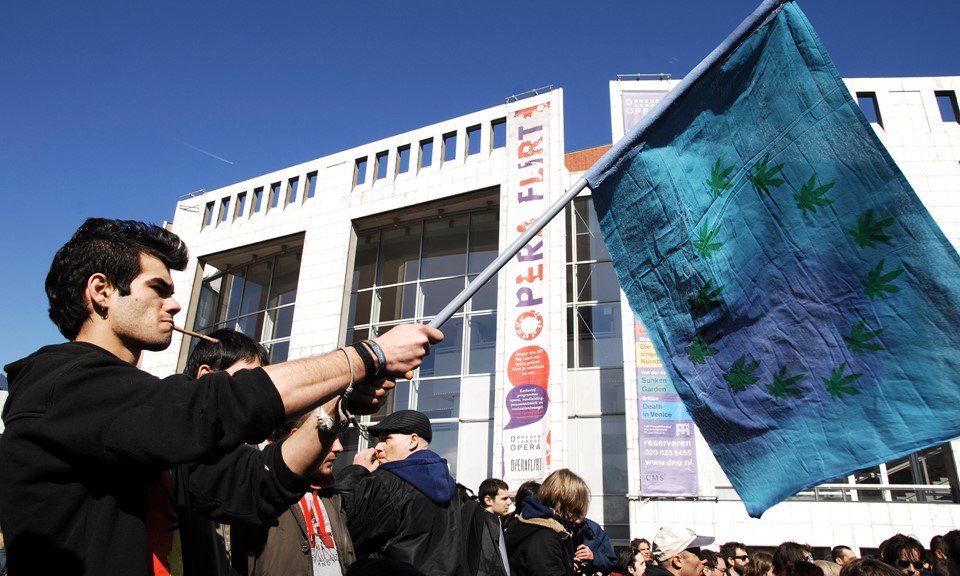 AMSTERDAM — When it comes to selling cannabis to foreigners, the pendulum of public acceptance in the Netherlands keeps on swinging. Back in 2012, after years of political debate over tourists pouring into Holland to buy and consume cannabis, the Dutch government introduced a so-called weed pass that would effectively ban tourists and allow only locals into the country’s famous cannabis coffeeshops. Now, just four years later, most cities have abandoned the system — only the city of Maastricht and a handful of smaller towns in the country’s southern region still enforce the ban.

Instead of embracing foreign visitors and the money they spend in coffeeshops and the surrounding communities, some Dutch politicians have labeled them “drug tourists.” This started in Maastricht, the southernmost city of the Netherlands, which shares borders with Germany and Belgium. The city has drawn visitors from those countries for centuries.

Maastricht officials welcome visitors who want to gaze upon Maastricht’s medieval basilicas or explore the ancient city’s museums. “Drug tourism” is something they have a harder time appreciating.

Strangely enough, the wariness toward cannabis tourists was driven more by mundane neighborhood problems than weighty public policy concerns. Cannabis tourism started to become a political problem 20 years ago, when in 1996 the national government lowered the maximum amount of cannabis one could buy at a coffeeshop from 30 grams to 5 grams. The move encouraged visitors from Belgium and Germany to stop by multiple coffeeshops in order to stock up before the ride back home. The predictable result, especially in border towns like Maastricht: more traffic, more unauthorized parking, and a lot of frustrated locals.

Another factor is the nationwide trend of closing down coffeeshops whenever possible. Since the 1990s, the total number of coffeeshops in the Netherlands has fallen from around 2,000 to only 582 today. That means bigger crowds and more traffic around the shops that are still open.

One of the great ironies of the weed pass is that Maastricht’s coffeeshops actively worked with local authorities to devise a plan to minimize the influx of tourists. One proposal was a mandatory pass, only available to those customers living within a 150-kilometer radius around Maastricht. The pass was fundamentally different from the one eventually adopted by the national government in that it did not discriminate — Belgians and Germans would also have been allowed to buy cannabis in Maastricht, provided they didn't live too far off.

Around 2010, national politicians reframed the local issue as a nationwide threat. They proposed a weed pass that would ban tourists from all Dutch coffeeshops. The system passed, and then-Justice Minister Ivo Opstelten became the champion of the weed pass. The program rolled out in 2012, first in the country’s three southern provinces and later in the rest of the country. (Opstelten, an anti-cannabis hardliner, resigned last year after a scandal in which Dutch justice department secretly returned more than €2 million (USD $2.2 million) to a large hash dealer after authorities failed to prove the money was earned illegally. 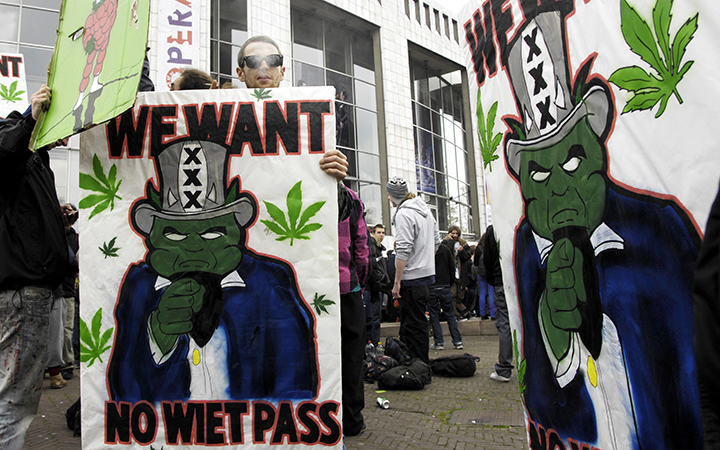 Protesters came out in force after the Netherlands adopted its "weed pass" program, as seen in this 2012 photo from Amsterdam. Photo by Derrick Bergman

Leading the battle against the weed pass was then-Amsterdam Mayor Job Cohen. He simply refused to enforce the weed pass or any kind of tourist ban — then went on national television to explain why. With more than 1.5 million tourists visiting Amsterdam coffeeshops each year, he said, the weed pass would push tourists into the streets and create a bonanza for illegal dealers.

The weed pass tourist ban has never been enforced in Amsterdam or any other major city in the northern Netherlands. But the program is a bit like a zombie: While it’s mostly dead, the weed pass lives on in Maastricht, in the province of Zeeland, and in a few cities in the province of Brabant. Brabant’s biggest city, Eindhoven, decided last summer to stop enforcing the ban. The same week that coffeeshops were allowed to serve tourists again, street dealers all but disappeared.

It seems only a matter of time before the last strongholds finally concede and put the weed pass to rest for good. The German website KeinWietpas.de (No Weedpass) is probably the best resource for staying on top of enforcement, as the site keeps its “Tolerance Map” up to date with admirable accuracy. One of the cities still enforcing the ban is Tilburg — but it’s taking a slightly more selective approach. Local officials there still enforce the weed pass rule but don’t want the policy to be a drag on the city’s main cultural events. Foreign visitors to the popular Woo Hah and Roadburn music festivals, for example, are allowed to enter local coffeeshops if they show their festival tickets.

The latest hopeful sign came at the end of June, when Bas van den Tillaar, mayor of Vlissingen, in Zeeland province, announced he will talk to local police and justice officials at their next meeting about abolishing the weed pass outright. It’s an encouraging sign, as Van den Tillaar represents the Christian political party CDA, which advocates clamping down on cannabis and closing all coffeeshops immediately.

These are just a few examples of the winding ways through which Dutch cannabis policy takes shape. It brings to mind what The Economist wrote about cannabis back in 1992: “Medicines often produce side effects. Sometimes they are physically unpleasant. Cannabis too has discomforting side effects, but these are not physical, they are political."